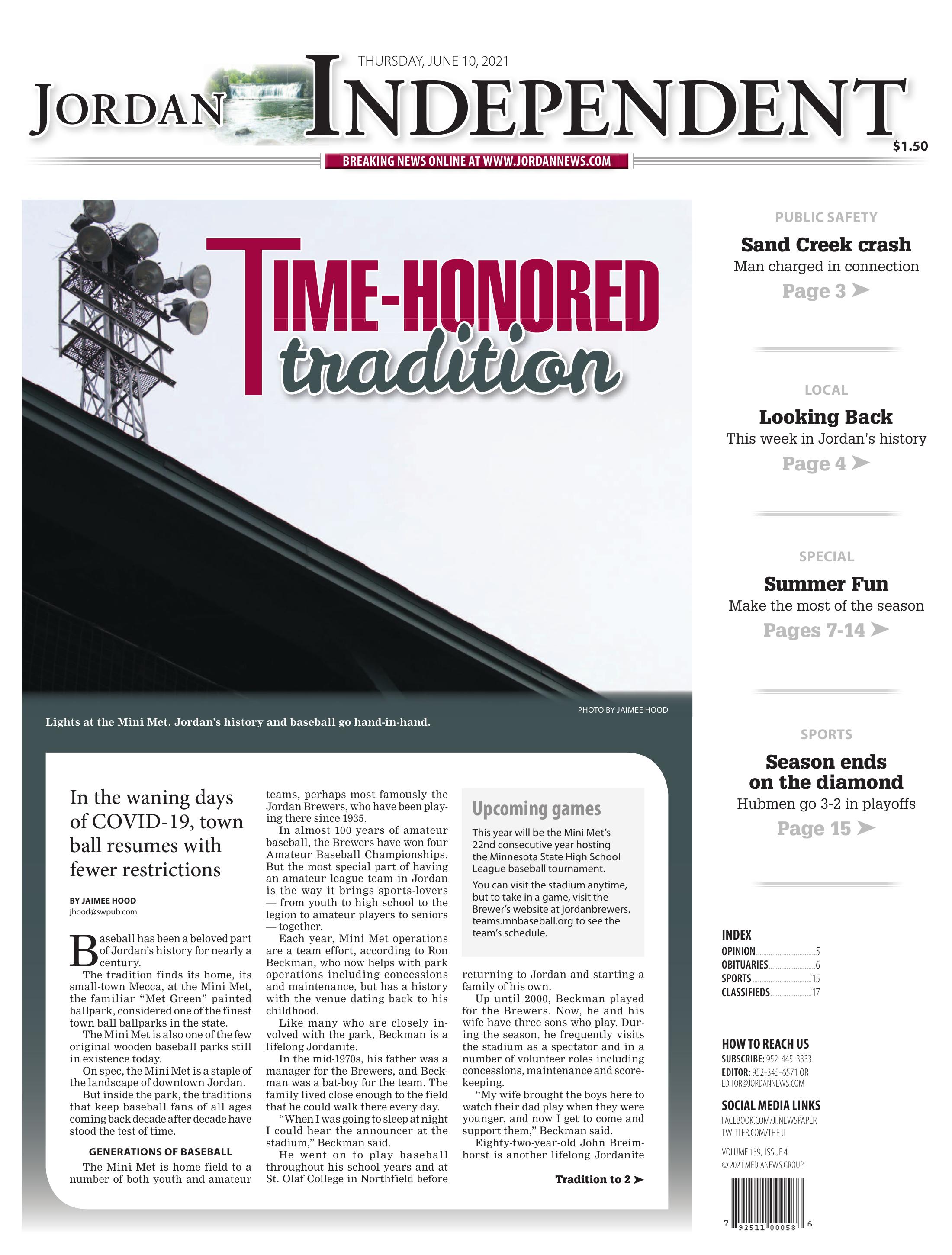 The tradition finds its home, its small-town Mecca, at the Mini Met, the familiar “Met Green” painted ballpark, considered one of the finest town ball ballparks in the state.

The Mini Met is also one of the few original wooden baseball parks still in existence today.

On spec, the Mini Met is a staple of the landscape of downtown Jordan.

But inside the park, the traditions that keep baseball fans of all ages coming back decade after decade have stood the test of time.

The Mini Met is home field to a number of both youth and amateur teams, perhaps most famously the Jordan Brewers, who have been playing there since 1935.

In almost 100 years of amateur baseball, the Brewers have won four Amateur Baseball Championships. But the most special part of having an amateur league team in Jordan is the way it brings sports-lovers — from youth to high school to the legion to amateur players to seniors — together.

Each year, Mini Met operations are a team effort, according to Ron Beckman, who now helps with park operations including concessions and maintenance, but has a history with the venue dating back to his childhood.

Like many who are closely involved with the park, Beckman is a lifelong Jordanite.

In the mid-1970s, his father was a manager for the Brewers, and Beckman was a bat-boy for the team. The family lived close enough to the field that he could walk there every day.

“When I was going to sleep at night I could hear the announcer at the stadium,” Beckman said.

He went on to play baseball throughout his school years and at St. Olaf College in Northfield before returning to Jordan and starting a family of his own.

Up until 2000, Beckman played for the Brewers. Now, he and his wife have three sons who play. During the season, he frequently visits the stadium as a spectator and in a number of volunteer roles including concessions, maintenance and score-keeping.

“My wife brought the boys here to watch their dad play when they were younger, and now I get to come and support them,” Beckman said.

Eighty-two-year-old John Breimhorst is another lifelong Jordanite who views town ball as a way of life.

Along with John Breunig, Breimhorst takes care of the day-to-day operations of the park, from scheduling games and tournaments to upkeep of paint on the fences.

For Breimhorst, it’s pride in the facility, combined with a genuine enjoyment of baseball, that keep him coming back year after year.

“It’s one of the nicer facilities out there for town ball,” Breimhorst said. “And I have a real love of baseball.”

Getting into the swing again

Although games were still able to occur last year throughout the pandemic, Minnesota State Town Ball Association rules imposed some limitations on the Mini Met including number of spectators and mask-wearing in the stands.

With fewer restrictions this summer, Beckman said, people are ready to get out and enjoy something that will bring the community together again.

“People are really starting to get that itch to get outside again, and this is a really nice release,” Beckman said.

Beckman also emphasized games at the Mini Met are made possible by a group effort between long-time volunteers, team members and the city, who he said have always made a real effort to keep the park in great shape.

“You don’t have to be a baseball fan to enjoy coming out,” Beckman said. “It’s the people that make it fun.”

You can visit the stadium anytime, but to take in a game, visit the Brewer's website at jordanbrewers.teams.mnbaseball.org to see the team's schedule,