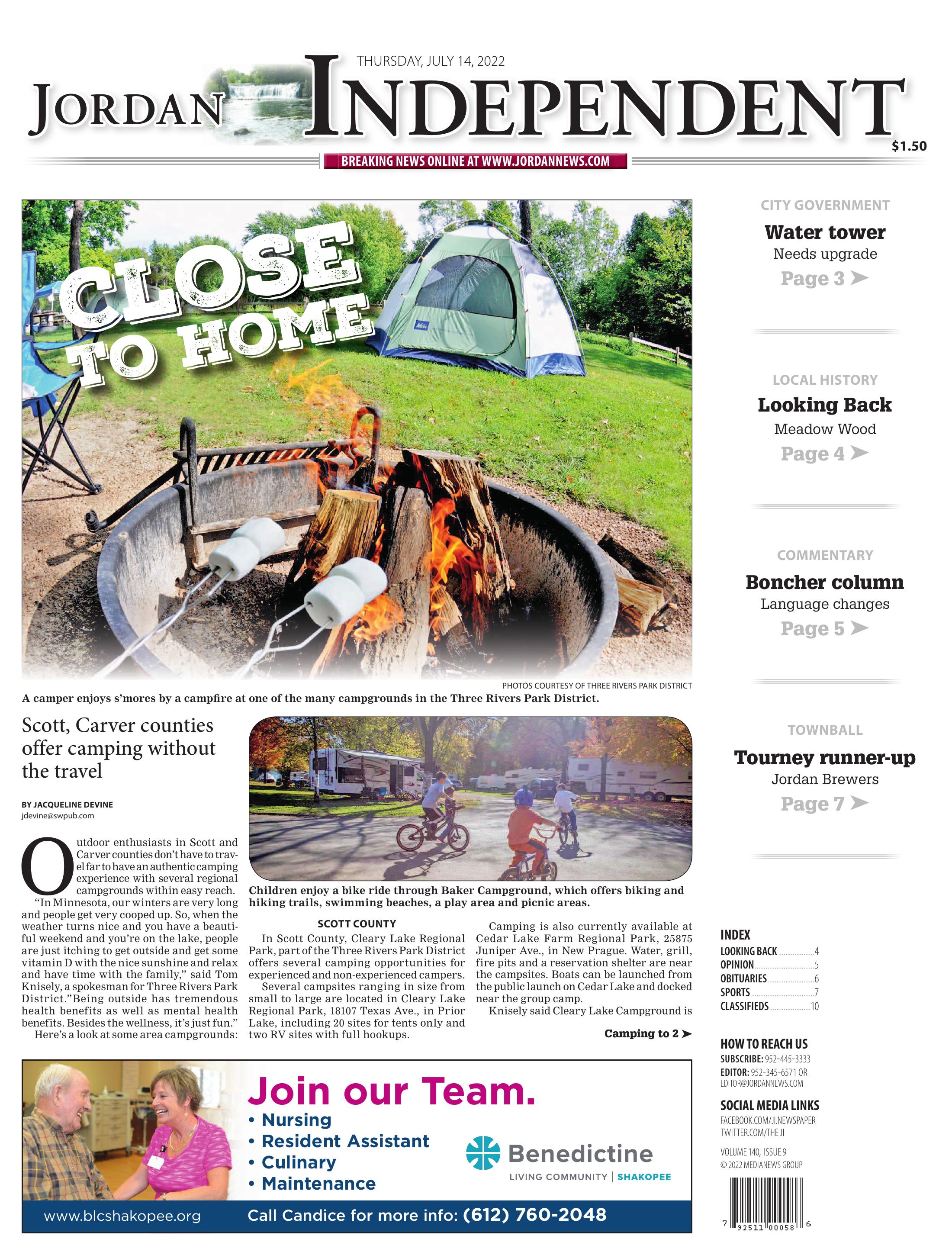 A camper enjoys s’mores by a campfire at one of the many campgrounds in the Three Rivers Park District.

A camper eats snacks by a campfire at Oak Grove Campground in Cleary Lake Regional Park in the Three Rivers Park District.

A family enjoys a picnic at Baker Campground in the Three Rivers Park District.

A camper sits by a tent and campfire made in a fire ring at a campground in the Three Rivers Park District.

A camper sits by a tent at Lake Auburn Campground in the Carver Park Reserve, part of the Three Rivers Park District.

Outdoor enthusiasts in Scott and Carver counties don’t have to travel far to have an authentic camping experience with several regional campgrounds within easy reach.

“In Minnesota, our winters are very long and people get very cooped up. So, when the weather turns nice and you have a beautiful weekend and you’re on the lake, people are just itching to get outside and get some vitamin D with the nice sunshine and relax and have time with the family,” said Tom Knisely, a spokesman for Three Rivers Park District.”Being outside has tremendous health benefits as well as mental health benefits. Besides the wellness, it’s just fun.”

Here’s a look at some area campgrounds:

Several campsites ranging in size from small to large are located in Cleary Lake Regional Park, 18107 Texas Ave., in Prior Lake, including 20 sites for tents only and two RV sites with full hookups.

Camping is also currently available at Cedar Lake Farm Regional Park, 25875 Juniper Ave., in New Prague. Water, grill, fire pits and a reservation shelter are near the campsites. Boats can be launched from the public launch on Cedar Lake and docked near the group camp.

“Cleary Lake has a few camping spots. The other big one is Baker Campground in Baker Park Reserve (Hennepin County). That’s out in Maple Plain in the Medina area,” Knisely said.

Carver CountyIn Carver County, Lake Auburn Campground, 7920 Victoria Dr., in Victoria, is a little piece of up north right in the city.

“Lake Auburn Campground is a great little campground. It gives you that Up North feel, close to home,” Knisely said. “It’s inside of Carver Park Reserve on the shores of Lake Auburn. So, there’s swimming, fishing, trails for hiking, biking and it’s very close to the Lowry Nature Center.”

Knisely said first-time campers should try Lake Auburn Campground to get a taste of rugged camping without the long car trip.

“It’s close to home so it’s easy to get to and it’s inexpensive,” Knisely said. “It’s five minutes to the nearest Dairy Queen. If the kids don’t want to have hot dogs and beans cooked over the campfire, you can hop in the car and get to a restaurant pretty quickly.”

Residents can also enjoy camping at the Baylor Regional Park Campground, maintained by the Carver County Parks and Recreation Department.

According to Samuel Pertz, parks and trails supervisor, the campground has many large shade trees providing protection from the sun and wind while creating a natural camping environment.

Located in western Carver County, the campground is within an hour and a half drive of much of the metropolitan area. There are 50 campsites, 35 including water and electrical hookups. There are also two shower and restroom facilities.

forest campgroundsThe Minnesota Department of Natural Resources is encouraging residents to visit local state parks and forests and take advantage of their thousands of campgrounds.

According to the DNR, state forests have 46 campgrounds with 1,000 campsites. State parks and state recreation areas offer more than 5,000 campsites and a variety of cabins, guesthouses and other lodging. Plus, there are thousands of miles of rugged or paved state trails and state water trails that can lead you there.

The multi-use Minnesota Valley State Trail follows the Minnesota River. The section of trail from Shakopee to Chaska is paved and a natural surface trail runs from Chaska to Belle Plaine.

"The biggest thing for camping is to dress for the weather. It can get rather chilly at night. I think people sometimes forget. It's summertime, so some people pack nothing but shorts and T-shirts and they forget that it gets very chilly at night or very chilly in the morning," said Tom Knisely, with Three Rivers Park District. "Bring layers and have plenty of sunscreen. Camping is miserable if you're sunburned. Also bring the bug spray. Where there's camping, there's always bugs."

Reserve a site online or call 763-559-6700. Info at www.threeriversparks.org/location/lake-auburn-campground