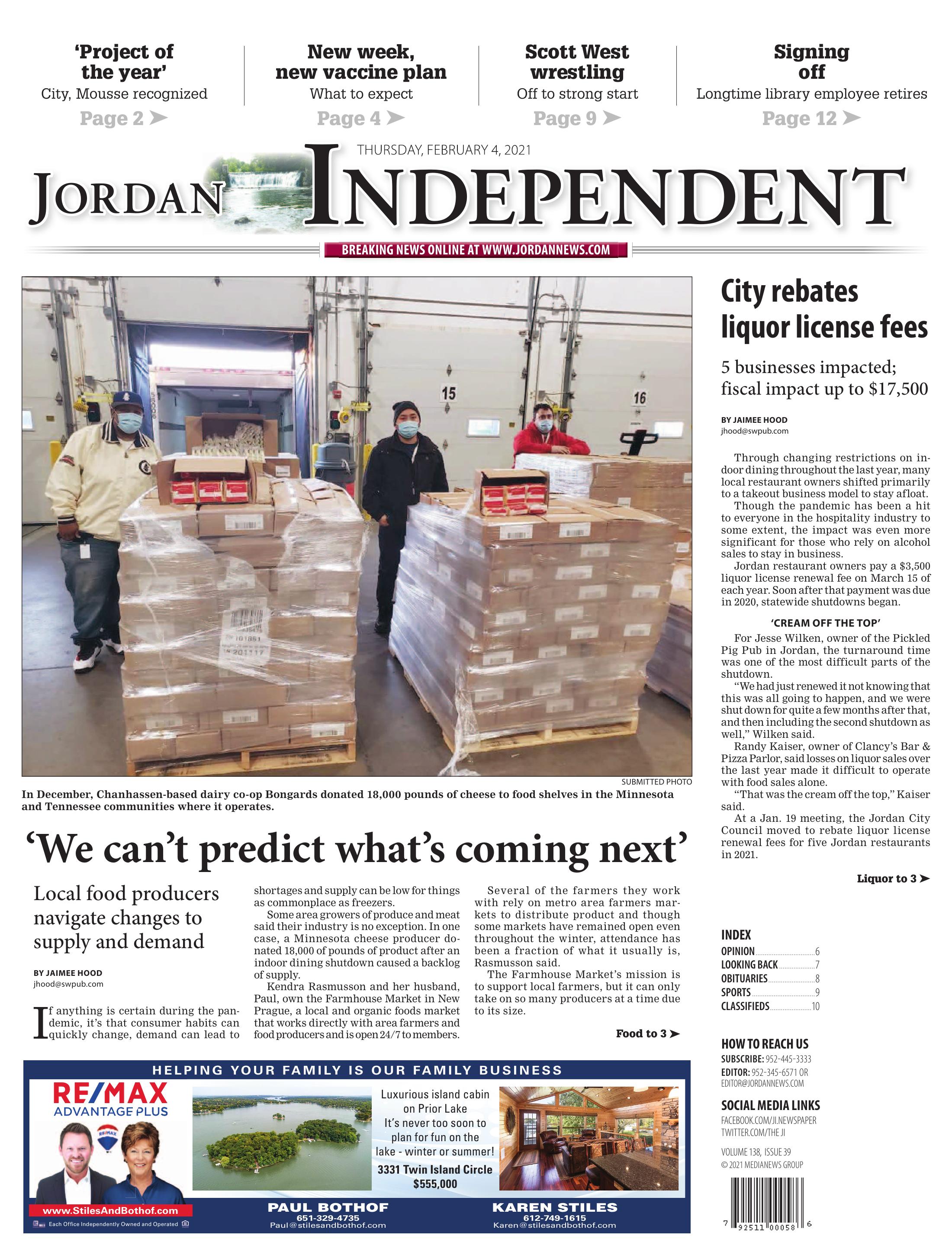 In December, Chanhassen-based dairy co-op Bongards donated 18,000 pounds of cheese to food shelves in the Minnesota and Tennessee communities where it operates.

During the picking season at Minnesota Harvest Orchard in Jordan, ripe apples are harvested by a team of seasonal workers.

If anything is certain during the pandemic, it’s that consumer habits can quickly change, demand can lead to shortages and supply can be low for things as commonplace as freezers.

Some area growers of produce and meat said their industry is no exception. In one case, a Minnesota cheese producer donated 18,000 of pounds of product after an indoor dining shutdown caused a backlog of supply.

Kendra Rasmusson and her husband, Paul, own the Farmhouse Market in New Prague, a local and organic foods market that works directly with area farmers and food producers and is open 24/7 to members.

Several of the farmers they work with rely on metro area farmers markets to distribute product and though some markets have remained open even throughout the winter, attendance has been a fraction of what it usually is, Rasmusson said.

The Farmhouse Market’s mission is to support local farmers, but it can only take on so many producers at a time due to its size.

“We’ve gotten more requests from local farmers to sell their products, which often we haven’t been able to help with,” Rasmusson said. “Our sales remained steady, but not high enough to warrant adding in many new producers or products all at once.”

They’ve witnessed fluctuations in the market, including shortages in certain products like cheese and dairy products, and ultimately some producers closing up shop.

Local meat producers have faced a unique snag in the production cycle.

Part of the problem is created by changes in demand, said Colleen Carlson, an educator at the University of Minnesota Extension who works closely with Scott and Carver counties.

But an unexpected challenge has been a shortage of freezers, Carlson said, which are an integral part of the preservation and transport process.

“Typically Fleet Farm or Menards would have them, but now you can’t find them to save your soul,” said Carlson.

On top of a shortage of individual freezers for local meat producers, the demand for local locker plants has skyrocketed, creating a bottleneck effect on the production process, which takes several days and has been slowed down by the current supply chain, Carlson said.

Processing plants, too, have had to reconsider how much product they take in. Carlson says some are currently running at only 60-80% capacity.

In addition to the process itself, a factor in the bottleneck has been a need for trained employees.

“You can’t just cut meat, you have to know how to do it, and wrap the meat properly,” Carlson said.

Producers of wholesale produce have faced the challenge of figuring out where to send excess product.

Jordan’s Minnesota Harvest Orchard has a contract with local schools to sell their apples. With a lower demand due to online learning for much of the 2020-21 school year, they relied on u-pick sales throughout the fall, Carlson said.

In March and April when these franchises experienced less demand due to more restrictions on restaurant dining, Tomes said operations were essentially cut in half.

“Basically our business fell off the chart,” Tomes said.

The company ended up donating more 18,000 pounds of cheese to local food banks in the Minnesota and Tennessee communities where they operate, including Second Harvest Heartland locally.

“It’s important that we work with our communities and partner with them and I think more importantly educate them,” Tomes said.

Carlson said farmers have experienced the effects the pandemic in waves, which she predicts will be an ongoing phenomenon.

“There’s been an increased optimism for markets — the question is how long is it going to last?” said Carlson.

Carlson said one of the positive effects of the pandemic is that consumers are eating at home more than they usually would.

Of course, the best thing they can do to support local farmers is to shop local and in-season as much as possible, Carlson said.

Though the Farmhouse Market is open to only members right now, it’s looking forward to opening again to the public once it’s safe to do so, Rasmusson said.

Overall, things are looking up, but for the most part they’re still uncertain.

“I think people are coming back, they want to come back,” Clancy’s owner Randy Kaiser said. “Even if it’s a 50% that’s a good start to get people back in the door.”

Through changing restrictions on indoor dining throughout the last year, many local restaurant owners shifted primarily to a takeout business model to stay afloat.

Though the pandemic has been a hit to everyone in the hospitality industry to some extent, the impact was even more significant for those who rely on alcohol sales to stay in business.

Jordan restaurant owners pay a $3,500 liquor license renewal fee on March 15 of each year. Soon after that payment was due in 2020, statewide shutdowns began.

‘Cream off the top’

For Jesse Wilken, owner of the Pickled Pig Pub in Jordan, the turnaround time was one of the most difficult parts of the shutdown.

“We had just renewed it not knowing that this was all going to happen, and we were shut down for quite a few months after that, and then including the second shutdown as well,” Wilken said.

Randy Kaiser, owner of Clancy’s Bar & Pizza Parlor, said losses on liquor sales over the last year made it difficult to operate with food sales alone.

“That was the cream off the top,” Kaiser said.

At a Jan. 19 meeting, the Jordan City Council moved to rebate liquor license renewal fees for five Jordan restaurants in 2021.

The decision followed similar ones made by Prior Lake and other cities in Scott County, an attempt to help the restaurant industry stay afloat after heavy financial impact over the last year.

Gabe Lopez of Delia’s All-in-One Restaurant says it’s encouraging to know the city is doing everything in its control to help its local restaurants.

Wilken, who’s been vocal with council members about the idea of a rebate to help local businesses, said he’s happy with their move and feels it’s congruent with actions they’ve taken in the past.

“Jordan has always been a city that’s very pro-business and works hard to support the businesses in their city,” Wilken said. “So that was great to see that continued support and giving us a chance of continued success.”

In total, the fiscal impact is up to $17,500 for all five businesses. This will come out of the city’s general budget, but is projected to be “a one-time credit due to a once-in-a-lifetime pandemic,” according to the Jan. 19 agenda item.

Along with more vaccine roll-outs and decreasing case numbers, restaurant owners like Lopez, Wilken and Kaiser are hoping they’ll be able to get back on their feet in the near future.

“I think people are coming back, they want to come back,” Kaiser said. “Even if it’s a 50% that’s a good start to get people back in the door.”