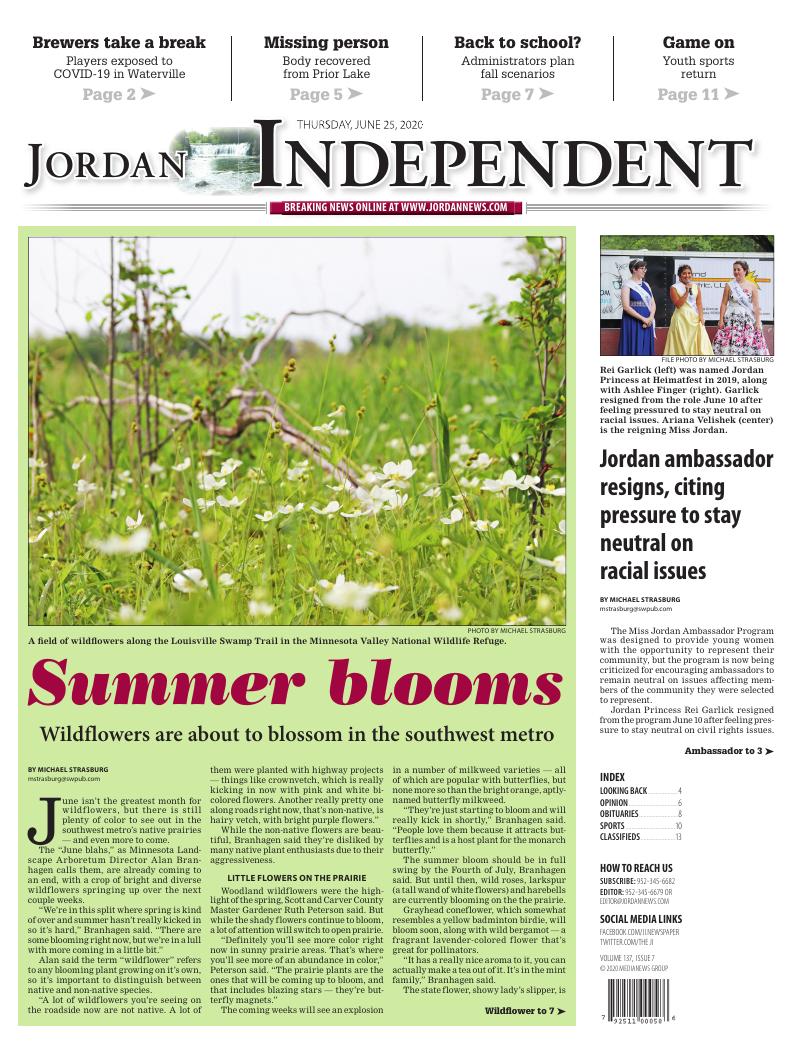 News
top story
Summer wildflowers are about to bloom across the southwest metro
By Michael Strasburg mstrasburg@swpub.com

June isn't the greatest month for wildflowers, but there is still plenty of color to see out in the southwest metro's native prairies — and even more to come.

The "June blahs," as Minnesota Landscape Arboretum Director Alan Branhagen calls them, are already coming to an end, with a crop of bright and diverse wildflowers springing up over the next couple weeks.

"We're in this split where spring is kind of over and summer hasn't really kicked in so it's hard," Branhagen said. "There are some blooming right now, but we're in a lull with more coming in a little bit."

Alan said the term "wildflower" refers to any blooming plant growing on it's own, so it's important to distinguish between native and non-native species.

"A lot of wildflowers you're seeing on the roadside now are not native. A lot of them were planted with highway projects — things like crownvetch, which is really kicking in now with pink and white bi-colored flowers. Another really pretty one along roads right now, that's non-native, is hairy vetch, with bright purple flowers."

While the non-native flowers are beautiful, Branhagen said they're disliked by many native plant enthusiasts due to their aggressiveness.

Little flowers on the prairie

Woodland wildflowers were the highlight of the spring, Scott and Carver County Master Gardener Ruth Peterson said. But while the shady flowers continue to bloom, a lot of attention will switch focus to open prairie.

"Definitely you'll see more color right now in sunny prairie areas. That's where you'll see more of an abundance in color," Peterson said. "The prairie plants are the ones that will be coming up to bloom, and that includes blazing stars — they're butterfly magnets."

The coming weeks will see an explosion in a number of milkweed varieties — all of which are popular with butterflies, but none more so than the bright orange, aptly-named butterfly milkweed.

"They're just starting to bloom and will really kick in shortly," Branhagen said. "People love them because it attracts butterflies and is a host plant for the monarch butterfly."

The summer bloom should be in full swing by the Fourth of July, Branhagen said. But until then, wild roses, larkspur (a tall wand of white flowers) and harebells are currently blooming on the the prairie.

"It has a really nice aroma to it, you can actually make a tea out of it. It's in the mint family," Branhagen said.

The state flower, showy lady's slipper, is currently in full bloom, but Branhagen said it's virtually impossible to spot in the area.

"I don't know of a single site in the southwest metro where they're still wild. Deer have been really hard on them."

Simply spotting a wildflower is only half of it — correctly identifying a native flower might require a little help.

"What color a flower is is a good place to start," Branhagen said. "Then it's arranged from when they bloom, from spring to fall. That's also really helpful."

"You take a photo of what you're looking at and it will give you choices as to what it can be," Moen said. "There are quite a few of those apps."

Branhagen and the master gardeners all recommended the nonprofit website MinnesotaWildflowers.info for a number of things.

"It's a great resource when trying to identify plants," Branhagen said. "I keep it on my speed access for when I forget the difference between two (flowers). They have absolutely everything. It also has sources to buy native plants."

Branhagen said one of the most effective things local residents can do to help the native wildflower population is to grow native flowers in gardens or around homes.

"They're tied to the web of life, too. So they're beneficial to insects and pollinators, which leads to feeding songbirds," Branhagen. "Bringing them in your landscape really helps the environment."

Peterson said native wildflowers have the bonus of being low-maintenance, too.

"Once they're established they take fewer inputs like water and fertilizer ... They're used to being out in the rough and out on their own," Peterson said.

But when it comes to viewing native wildflowers in their natural environment, Branhagen said it's hard to top the Minnesota Valley National Wildlife Refuge in Louisville Township — located off Highway 169 between Jordan and Shakopee. Branhagen said visitors can further help the wildflower population by continuing to support the protection of open space in the area.

"The Minnesota Valley National Wildlife Refuge is one of the greatest urban wildlife refuges in the country and we're lucky to have it right here," Branhagen said.

The Louisville swamp trail, which cuts through part of the refuge, is open daily between sunrise and sunset.

The Miss Jordan Ambassador Program was designed to provide young women with the opportunity to represent their community, but the program is now being criticized for encouraging ambassadors to remain neutral on issues affecting members of the community they were selected to represent.

Jordan Princess Rei Garlick resigned from the program June 10 after feeling pressure to stay neutral on civil rights issues. Garlick said the program’s committee and primary sponsor, the Jordan Commercial Club, encouraged her to “stay neutral” on social media in the wake of George Floyd’s death.

“They were telling me I needed to be neutral on Black Lives Matter and human rights, and to me that’s not OK,” Garlick said. “I think as a young white girl in our community I need to be an advocate and I need to be an ally of those that don’t share my same privilege and I need to use my voice to empower their voices.”

Garlick said she was contacted last week by the program’s committee coordinator, Terra Lembeck, regarding a complaint against two of her social media posts. One was in response to a tweet by President Donald Trump, in which he warned “when the looting starts the shooting starts.”

“That post was just telling my friends to be careful,” Garlick said. “I know a lot of people in Minneapolis and a lot of my friends were going to the protests and I wanted them to be safe.”

“Essentially the idea of it was that if you’re more upset about the looting at Target than you are about the murder that was committed, you need to check your privilege because there is something wrong there,” she said.

The committee later approached Garlick about a complaint regarding a comment she’d made on Facebook, she said. Garlick said she wasn’t sure which comment was being referenced, but the committee told her she “needed to stay neutral.”

In a June 16 Facebook post, the Miss Jordan Ambassador Program said their exact words to Garlick were as follows:

“You can comment on them but they have to be neutral. I know it’s not easy, but that’s how it has to be. If someone sees a post from you and they don’t like it or agree with it and they happen to be at an event the ambassadors are at — you just made yourself a target. It’s sad but that’s why we ask everyone to be neutral.”

Garlick said the committee did not indicate which specific part of the ambassador contract she violated. The word “neutral” does not appear in the program’s rules and guidelines.

Throughout her tenure as ambassador, Garlick made numerous social media posts about women’s, LGBTQ and human rights.

“None of those posts had ever had any backlash or any comments on them,” Garlick said. “You can kind of see how their response to my posts was because of someone that complained, and they decided to stick with their statement of neutrality instead of talking about it and discussing what is and isn’t OK.”

Garlick later received a text saying if there were any further complaints or issues, the Jordan Commercial Club would ask her to step down and revoke her $350 scholarship.

Garlick resigned June 10 and attended a protest in Jordan the following day, organized by the Carver County Black Lives Matter group. She said the decision to step down wasn’t particularly difficult.

“I was essentially given an ultimatum and I chose to resign because I can’t stay neutral about this,” Garlick said.

The Jordan Ambassadors program did not respond to a repeated request for comment.

The June 16 statement said past Miss Jordans have refrained from commenting on the issue out of fear of becoming a target, adding that some have been threatened and one was told to “turn over their crown and kill herself.”

In her remarks, Velishek said outside perception of the program can be clouded and the program’s requirements haven been taken out of context over the past week.

“If you are not a part of the ambassador program, it can lead to questions, misunderstanding, and what the program entails,” Velishek said. “... We as a court were awarded this opportunity to represent the community and stand by requirements that have been taken out of context in social media in the last few days. The recent posts on social media have been used to tear apart each other, this should have been the opportunity to voice the education on diversity, BLM and any other type of belief so all have a better understanding in today’s society.”

On June 17, Garlick was invited to meet with the program’s committee coordinator and three members of the Jordan Commercial Club to discuss potential changes to the program. Garlick said her top priority would be to rewrite the ambassador contract to make rules and expectations clear and consistent.

“It’s incredibly vague and it doesn’t provide clear answers so there is a lot of room for interpretation based on who is the one charge,” Garlick said.

Garlick was offered a seat on the committee in order to help guide changes to the program. She said she’s considering the offer.

“The committee has expressed that they want to do better and they want changes but they’re not sure how, which is why they’re asking for my help,” Garlick said. 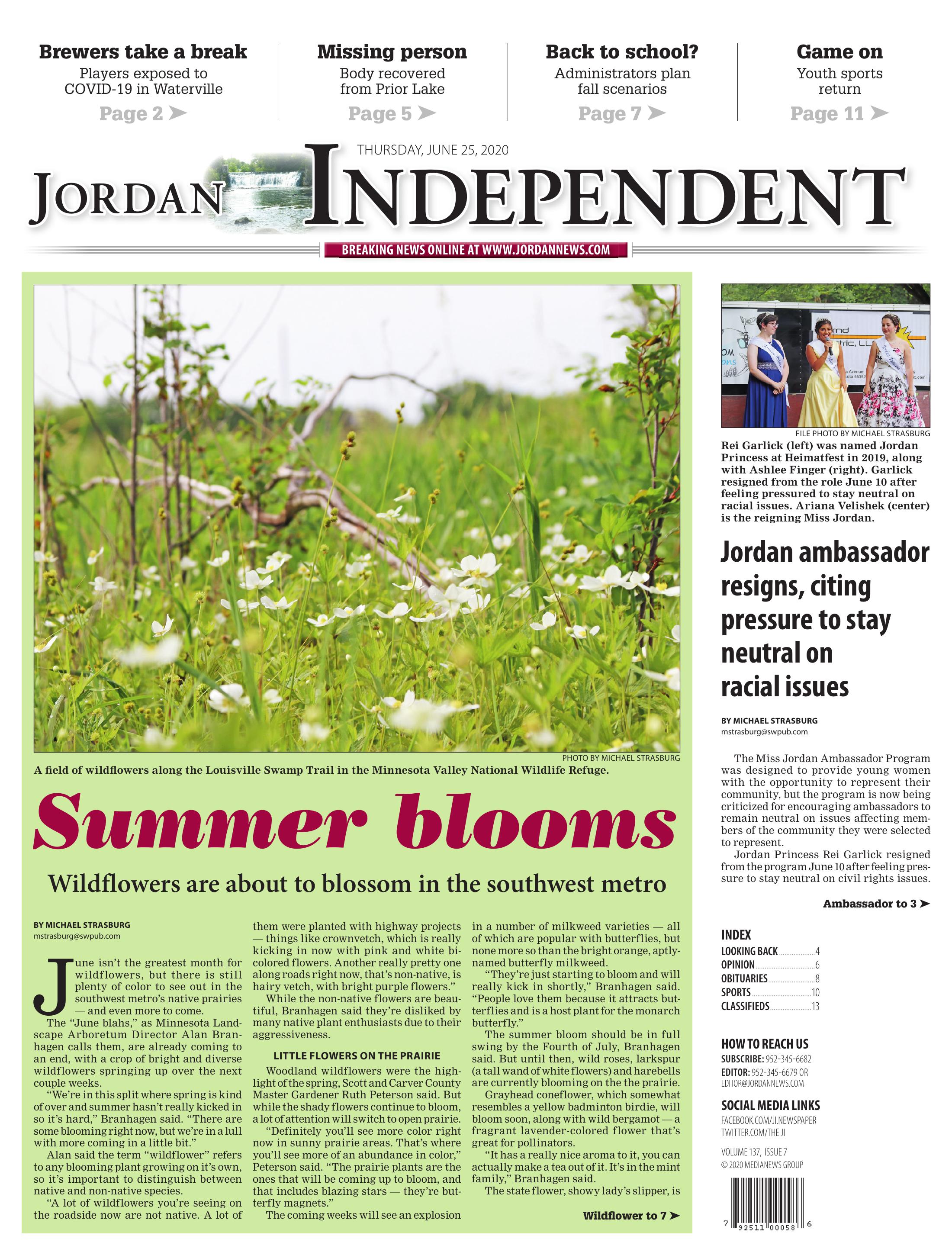