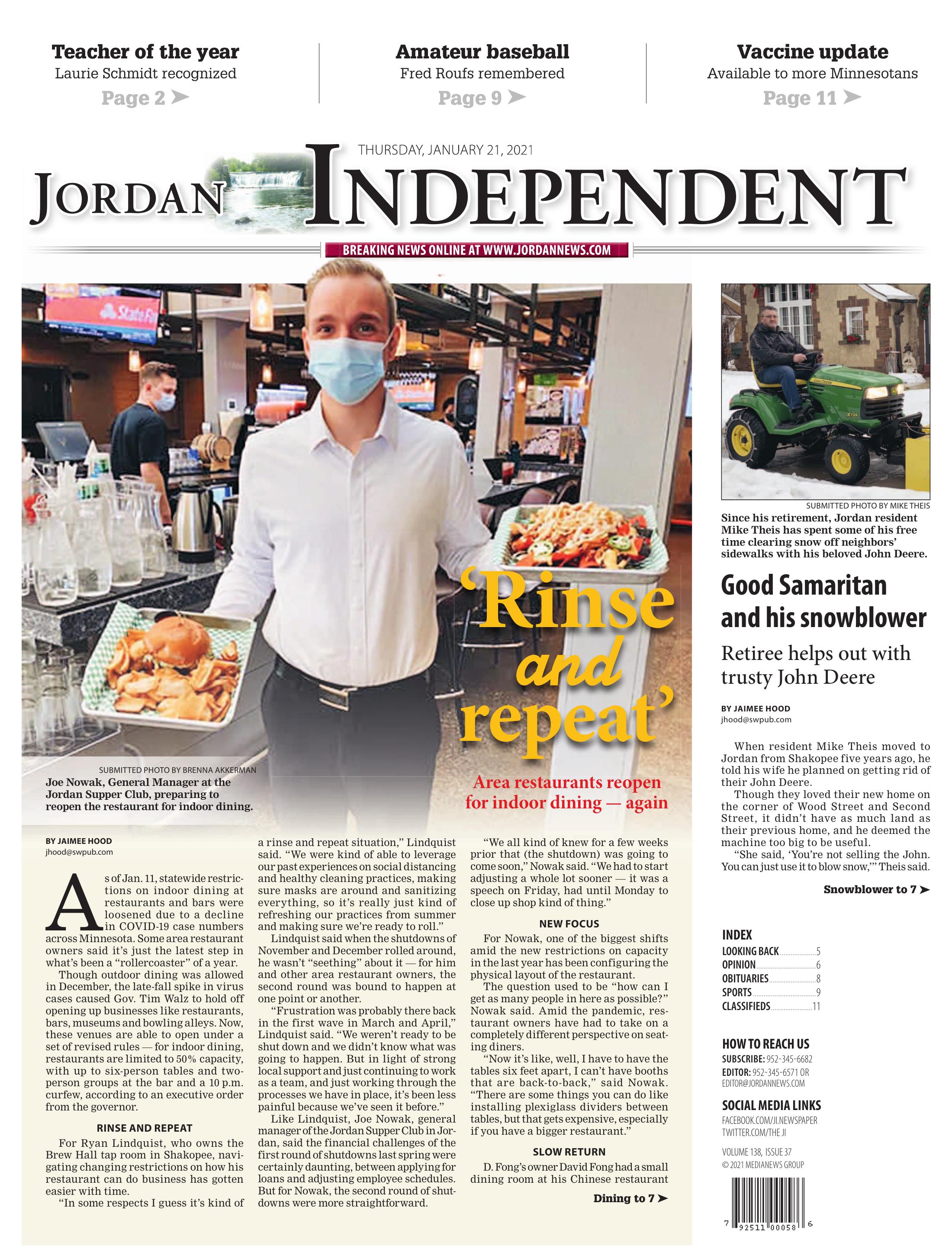 As of Jan. 11, statewide restrictions on indoor dining at restaurants and bars were loosened due to a decline in COVID-19 case numbers across Minnesota. Some area restaurant owners said it's just the latest step in what's been a "rollercoaster" of a year.

Though outdoor dining was allowed in December, the late-fall spike in virus cases caused Gov. Tim Walz to hold off opening up businesses like restaurants, bars, museums and bowling alleys. Now, these venues are able to open under a set of revised rules — for indoor dining, restaurants are limited to 50% capacity, with up to six-person tables and two-person groups at the bar and a 10 p.m. curfew, according to an executive order from the governor.

For Ryan Lindquist, who owns the Brew Hall tap room in Shakopee, navigating changing restrictions on how his restaurant can do business has gotten easier with time.

"In some respects I guess it's kind of a rinse and repeat situation," Lindquist said. "We were kind of able to leverage our past experiences on social distancing and healthy cleaning practices, making sure masks are around and sanitizing everything, so it's really just kind of refreshing our practices from summer and making sure we're ready to roll."

Lindquist said when the shutdowns of November and December rolled around, he wasn't "seething" about it — for him and other area restaurant owners, the second round was bound to happen at one point or another.

"Frustration was probably there back in the first wave in March and April," Lindquist said. "We weren't ready to be shut down and we didn't know what was going to happen. But in light of strong local support and just continuing to work as a team, and just working through the processes we have in place, it's been less painful because we've seen it before."

Like Lindquist, Joe Nowak, general manager of the Jordan Supper Club in Jordan, said the financial challenges of the first round of shutdowns last spring were certainly daunting, between applying for loans and adjusting employee schedules. But for Nowak, the second round of shutdowns were more straightforward.

"We all kind of knew for a few weeks prior that (the shutdown) was going to come soon," Nowak said. "We had to start adjusting a whole lot sooner — it was a speech on Friday, had until Monday to close up shop kind of thing."

For Nowak, one of the biggest shifts amid the new restrictions on capacity in the last year has been configuring the physical layout of the restaurant.

The question used to be "how can I get as many people in here as possible?" Nowak said. Amid the pandemic, restaurant owners have had to take on a completely different perspective on seating diners.

"Now it's like, well, I have to have the tables six feet apart, I can't have booths that are back-to-back," said Nowak. "There are some things you can do like installing plexiglass dividers between tables, but that gets expensive, especially if you have a bigger restaurant."

D. Fong's owner David Fong had a small dining room at his Chinese restaurant in Savage before COVID-19 hit. Though they were able to reopen this week for indoor diners, it's been a little slow, Fong said.

"We've been extremely fortunate that our takeout has been pretty solid," Fong said. "But I think people are still cautious about going out."

Still, Fong said, he's been able to shift staff around to cover the dining room and curbside delivery, avoiding any major layoffs, which he's grateful for.

Not all area restaurants have been quite so lucky, Fong said.

Lindquist said a large portion of his staff is part-time, and he's worked hard to make sure employees get hours and have money in their pockets.

Now that the Brew Hall is able to have customers inside, additional staff are needed to bus tables quickly and get diners in and out.

"There's some additional labor we need to do to satisfy the restrictions, even though we're not at 100% capacity," Lindquist said.

Rachel Sweere, who works at The Feed Mill Restaurant in Jordan, said the changing restrictions have been frustrating, but they've also caused a financial burden on restaurant employees.

Still, Sweere said she and the other Feed Mill staff are excited to be able to reopen and have many of their regular customers back.

"We're excited to get back to somewhat of a normal life," said Sweere.

Though Sweere, Fong, Nowak and Lindquist all said they and their staff are excited to see customers in their buildings again, Fong cautioned that amid the ongoing uncertainty, area restaurants are not out of the woods quite yet.

"Obviously we've seen many restaurants go out of business along with great businesses, and all those employees no longer have jobs," Fong said. "It's been extremely hard on the hospitality industry. The community is doing a great job of supporting local business, and we hope they continue to do that, but we're not out of the difficult zone quite yet."

"It's been a rollercoaster this year, just the financial burden and not knowing what's going to happen next." 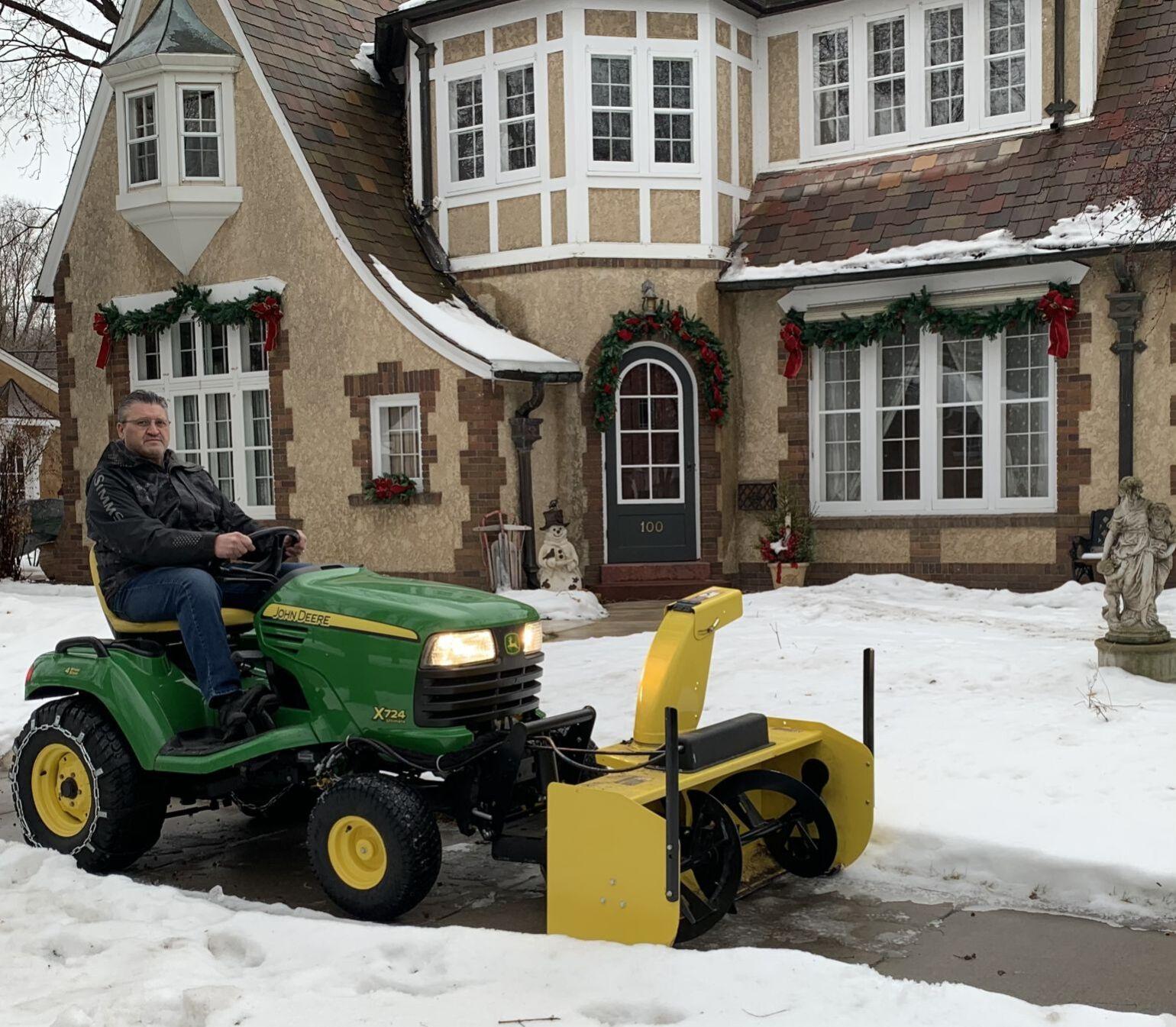 Since his retirement, Jordan resident Mike Theis has spent some of his free time clearing snow off neighbors’ sidewalks with his beloved John Deere.