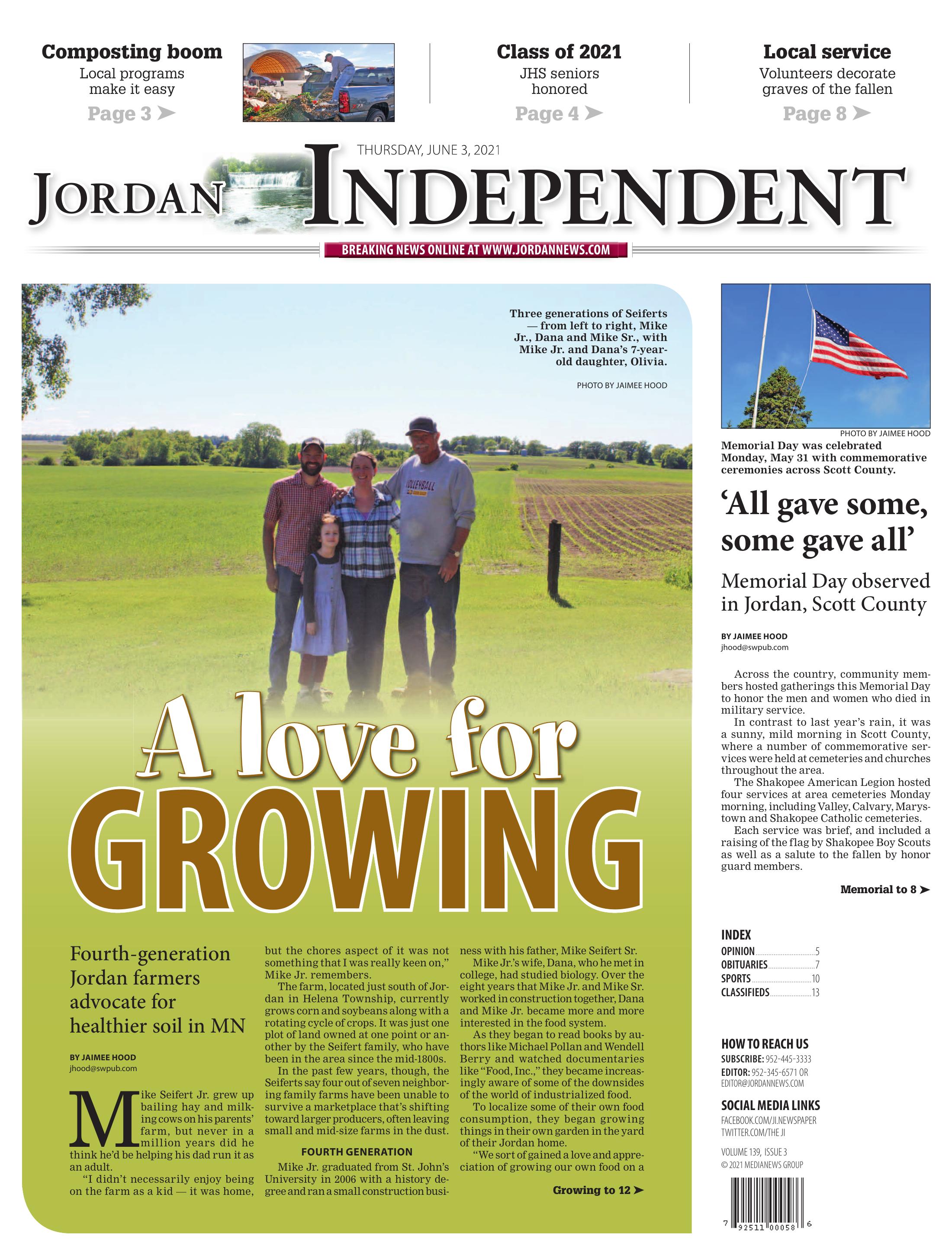 Mike Seifert Jr. grew up bailing hay and milking cows on his parents’ farm, but never in a million years did he think he’d be helping his dad run it as an adult.

“I didn’t necessarily enjoy being on the farm as a kid — it was home, but the chores aspect of it was not something that I was really keen on,” Mike Jr. remembers.

The farm, located just south of Jordan in Helena Township, currently grows corn and soybeans along with a rotating cycle of crops. It was just one plot of land owned at one point or another by the Seifert family, who have been in the area since the mid-1800s.

In the past few years, though, the Seiferts say four out of seven neighboring family farms have been unable to survive a marketplace that’s shifting toward larger producers, often leaving small and mid-size farms in the dust.

Mike Jr. graduated from St. John’s University in 2006 with a history degree and ran a small construction business with his father, Mike Seifert Sr.

Mike Jr.’s wife, Dana, who he met in college, had studied biology. Over the eight years that Mike Jr. and Mike Sr. worked in construction together, Dana and Mike Jr. became more and more interested in the food system.

As they began to read books by authors like Michael Pollan and Wendell Berry and watched documentaries like “Food, Inc.,” they became increasingly aware of some of the downsides of the world of industrialized food.

To localize some of their own food consumption, they began growing things in their own garden in the yard of their Jordan home.

“We sort of gained a love and appreciation of growing our own food on a small scale. We thought, well, we could take this to another level, too,” said Mike Jr.

“They would read a book and then come over and say, ‘Read this!” Mike Sr. remembers.

Over time they began to pitch in more and more to efforts around the farm.

Prior to the pandemic, Mike Jr. and Dana were both working other full-time jobs — Mike continued to run the construction business, while Dana worked full-time as a pediatric physical therapist.

“When the pandemic hit I scaled my jobs way back because Dana was working full-time, and then we sort of flip-flopped where Dana cut back to stay home with our daughter during the school year,” said Mike Jr. “We’ve had to be very flexible to do everything we want to do.”

Now, Mike Jr. and Dana make up the fourth generation of Seiferts to run the farm, collaborating with Mike Sr. and his wife, who are still very active in day-to-day farm operations.

Though Dana’s science background translated well to newfound passions in ecological health and farm function, having grown up in Bloomington, she had limited experience with farm life.

She says the transition has been, and continues to be, a paradigm shift.

“It’s not an easy life,” Dana said. “I don’t know of any other industry where people work as hard and have to be as creative and solve as many problems as farmers do and have almost no control over how they sell what they produce.”

If farmers were paid by the hour, they would be millionaires, said Mike Sr., who often works 14-hour days, seven days a week.

Over the years since Mike Sr. took over management of the farm from his own father, he’s seen many changes to the landscape.

”When I was growing up it was much more diversified,” Mike Sr. said. “We had dairy, we had hogs, we had chickens. We did a little bit of everything.”

In the 1970s, the Department of Agriculture encouraged farmers to take advantage of new, manufactured fertilizer technologies to plant crops “fencerow to fencerow,” essentially taking up every square inch of land.

Thanks to the new fertilizer technology, many farmers also did away with their livestock, thinking they would no longer need to deal with manure to help their plants grow healthy and strong.

The issue with the new, chemical-laden fertilizer, though, Dana said, is that it depleted the health of the soil.

”Just to survive the farm crisis in the ‘80s, most farms had to get big — those that could bought up their neighbors’ land, and those that couldn’t sold and moved to town,” said Dana.

Though she couldn’t have foreseen the turn her life has taken toward agriculture, Dana has been able to apply her biology background to a passion for sustaining her family’s business for years to come.

That’s why the Seiferts want to spread awareness about the importance of healthy soil in public policy.

A bill in front of Minnesota legislators right now called the 100% Soil-Healthy Farming Bill, backed by the Land Stewardship Project, would incentivize farmers across the state to use soil-healthy practices like rotationally grazed livestock, perennial cropping systems, cover cropping systems and no-till soil.

The Seiferts know first-hand that one of the most important steps in supporting local farmers is increasing local awareness.

”There are a ton of things consumers can do to support local farmers like us for generations to come,” Mike Jr. said.

In fact, over the COVID-19 pandemic, demand for local, in-season produce skyrocketed along with the focus on buying local to support small businesses, the Seiferts said.

Looking to the future

In the coming years, the Seiferts have plans to bring back some livestock that they hope to sell directly to consumers.

”That would essentially enable us to add another income source, but it takes time, it takes investment, it takes labor to get the fences and the infrastructure and things back up to where we can actually do that,” said Mike Jr. “So we’re constantly working on on those goals, those things that we have in our future vision.”

In the meantime, despite the challenges they continue to face, Mike Sr. said it’s the little things that keep him going day after day.

”The reward that you glean a lot of times from is just the lifestyle itself,” said Mike Sr. “You just look forward to getting up every day and seeing the sunrise, making it work.” 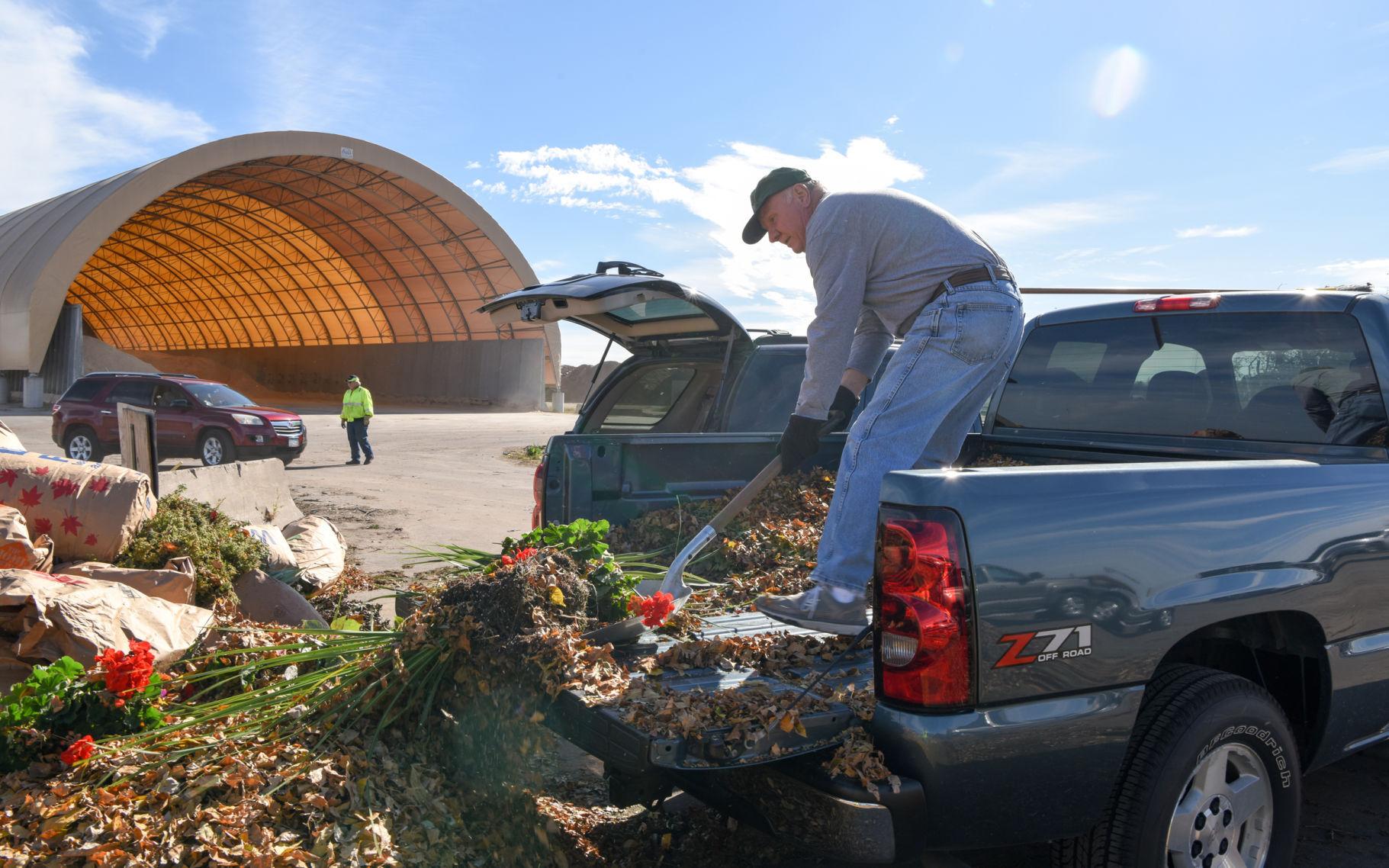 Yard waste or carbon material is unloaded from a truck bed at the SMSC Organics Recycling Facility in Shakopee. The material will be mixed with food waste and turned over the course of 60 to 90 days until it is turned into compost.

Memorial Day was celebrated Monday, May 31 with commemorative ceremonies across Scott County.

Community members gathered Monday morning at St. Joe’s cemetery in Jordan to honor the fallen with a Memorial Day service.

Family members traditionally decorate their loved ones’ graves with flowers to honor their legacy.

Members of the Jordan Boy Scout troop raised the flag to begin the ceremony Monday morning.

Two members of Shakopee’s Honor Guard make their way to the parking lot after the ceremony at Marystown Cemetery on Monday morning.

Shakopee Boy Scouts participate in the raising of the flag at the Marystown Cemetery ceremony.

Across the country, community members hosted gatherings this Memorial Day to honor the men and women who died in military service.

In contrast to last year’s rain, it was a sunny, mild morning in Scott County, where a number of commemorative services were held at cemeteries and churches throughout the area.

Each service was brief, and included a raising of the flag by Shakopee Boy Scouts as well as a salute to the fallen by honor guard members.

At 10 a.m. there was an assembly at the Legion with a program of events that acted as “a solemn remembrance of the lives lost, the men and women loved and missed.”

Just a few minutes down the road in Jordan, a Memorial Day Mass was held at 8 a.m. at Saint John the Baptist Catholic Church.

Members of the Jordan Veterans Honor Guard gave a salute, and Bill Rutz of Jordan’s American Legion gave a tribute to departed comrades.

“We’re here today to honor American heroes, from the American Revolution to the global war on terrorism, and every battle in between” said Rutz.

The location where fallen soldiers served is less important than the heart of each of the men and women, which is what truly matters, Rutz said.

Following the ceremonies, event-goers could walk around the cemetery and honor each grave of a fallen military member, marked with an American flag. Many also had been decorated by community and family members with bouquets of flowers.

In his tribute, Rutz urged community members to reflect on ways they could support the families of those who lost a loved one in service.

“War is often not the best policy, but the heroes that war has produced are the best of America,” said Rutz.

Jordan’s traditional Memorial Day parade was not able to be planned this year due to pandemic restrictions that were in effect until recently.

However, Memorial Day remembrance will continue through the summer — a special program will be hosted at Veterans Park on Aug. 19.