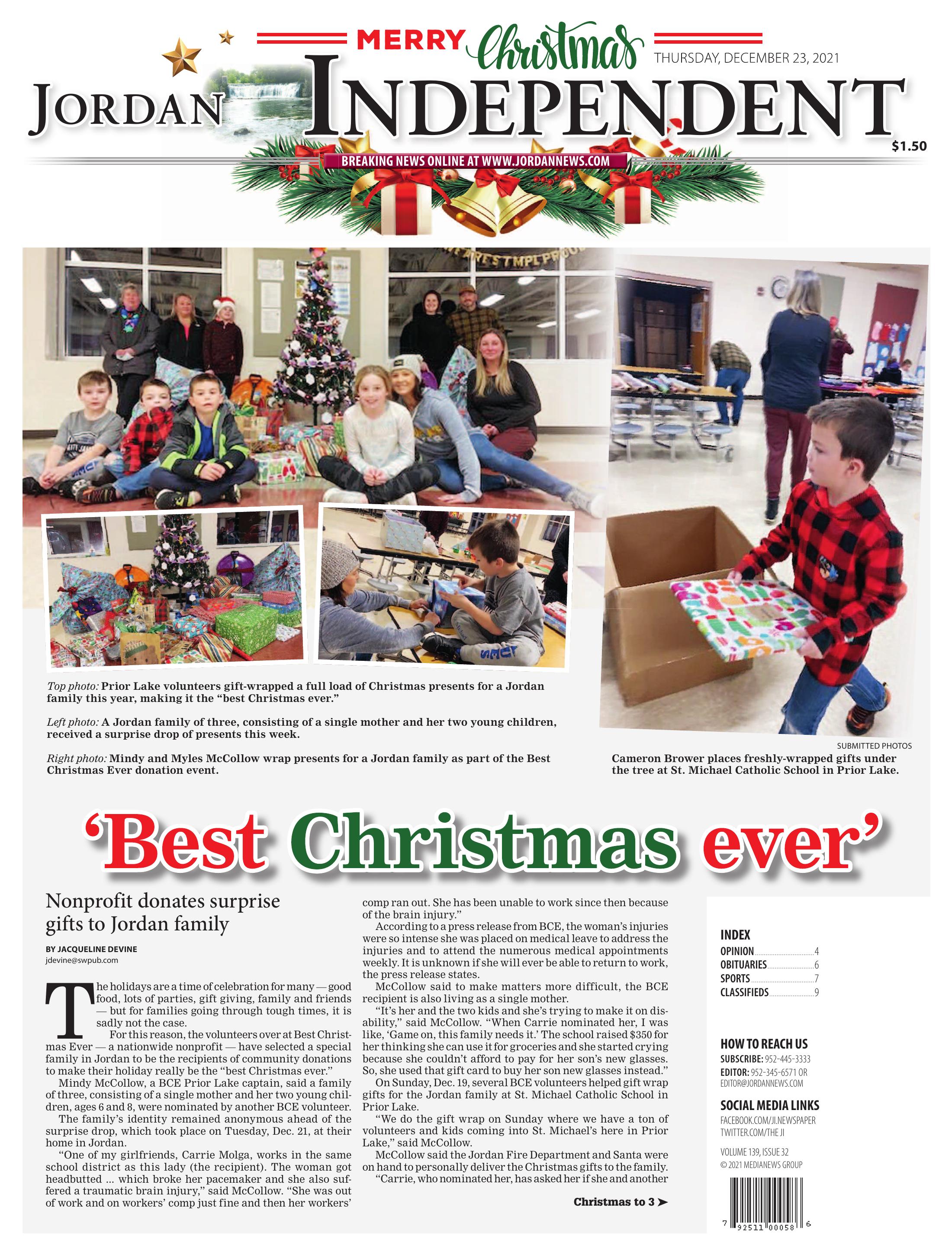 Prior Lake volunteers gift-wrapped a full load of Christmas presents for a Jordan family this year, making it the “best Christmas ever.”

Young Prior Lake volunteer Maddy McCollow wraps presents for a Jordan family as part of a Best Christmas Ever donation event.

A Jordan family of three, consisting of a single mother and her two young children, received a surprise drop of presents this week.

Cameron Brower places freshly-wrapped gifts under the tree at St. Michael Catholic School in Prior Lake.

Mindy and Myles McCollow wrap presents for a Jordan family as part of the Best Christmas Ever donation event.

A young volunteer places freshly-wrapped gifts under the tree at St. Michael Catholic School in Prior Lake.

Corey and Cameron Brower wrap presents at St. Michael Catholic School in Prior Lake, helping to make the “best Christmas ever.’

The holidays are a time of celebration for many — good food, lots of parties, gift giving, family and friends — but for families going through tough times, it is sadly not the case.

For this reason, the volunteers over at Best Christmas Ever — a nationwide nonprofit — have selected a special family in Jordan to be the recipients of community donations to make their holiday really be the “best Christmas ever.”

Mindy McCollow, a BCE Prior Lake captain, said a family of three, consisting of a single mother and her two young children, ages 6 and 8, were nominated by another BCE volunteer.

The family’s identity remained anonymous ahead of the surprise drop, which took place on Tuesday, Dec. 21, at their home in Jordan.

“One of my girlfriends, Carrie Molga, works in the same school district as this lady (the recipient). The woman got headbutted ... which broke her pacemaker and she also suffered a traumatic brain injury,” said McCollow. “She was out of work and on workers’ comp just fine and then her workers’ comp ran out. She has been unable to work since then because of the brain injury.”

According to a press release from BCE, the woman’s injuries were so intense she was placed on medical leave to address the injuries and to attend the numerous medical appointments weekly. It is unknown if she will ever be able to return to work, the press release states.

“It’s her and the two kids and she’s trying to make it on disability,” said McCollow. “When Carrie nominated her, I was like, ‘Game on, this family needs it.’ The school raised $350 for her thinking she can use it for groceries and she started crying because she couldn’t afford to pay for her son’s new glasses. So, she used that gift card to buy her son new glasses instead.”

“We do the gift wrap on Sunday where we have a ton of volunteers and kids coming into St. Michael’s here in Prior Lake,” said McCollow.

McCollow said the Jordan Fire Department and Santa were on hand to personally deliver the Christmas gifts to the family.

“Carrie, who nominated her, has asked her if she and another girlfriend can bring pizza over to eat dinner with her and her kids,” McCollow said prior to the big day. “So, we know she’s going to be home.”

McCollow also said giving back to the community is the reason why she loves volunteering for the nonprofit.

“My friend here in Prior Lake is the the volunteer coordinator. She had asked me about six months ago if I wanted to join and I asked her if I could just help her. Then she came to me again and said she really needed some captains and I said OK,” said McCollow. “The more I got to know what this organization is about and seeing all these families, now I’ll never leave.”

McCollow added that seeing the smiling and surprised faces on families makes it all worth it.

“The holidays are just the time where it should be about family and where people don’t have to worry,” she said. “And if we can bring the love and joy to this family because of what has happened and the events that have happened, that’s what it’s all about to me. Seeing these people’s faces, seeing the kid’s faces and the mom’s face when we show up to help.”

For more information on Best Christmas Ever and how to volunteer, visit www.bcemovement.org/. To make a donation, visit https://bcemovement.kindful.com/bce2021/team-beblessed.