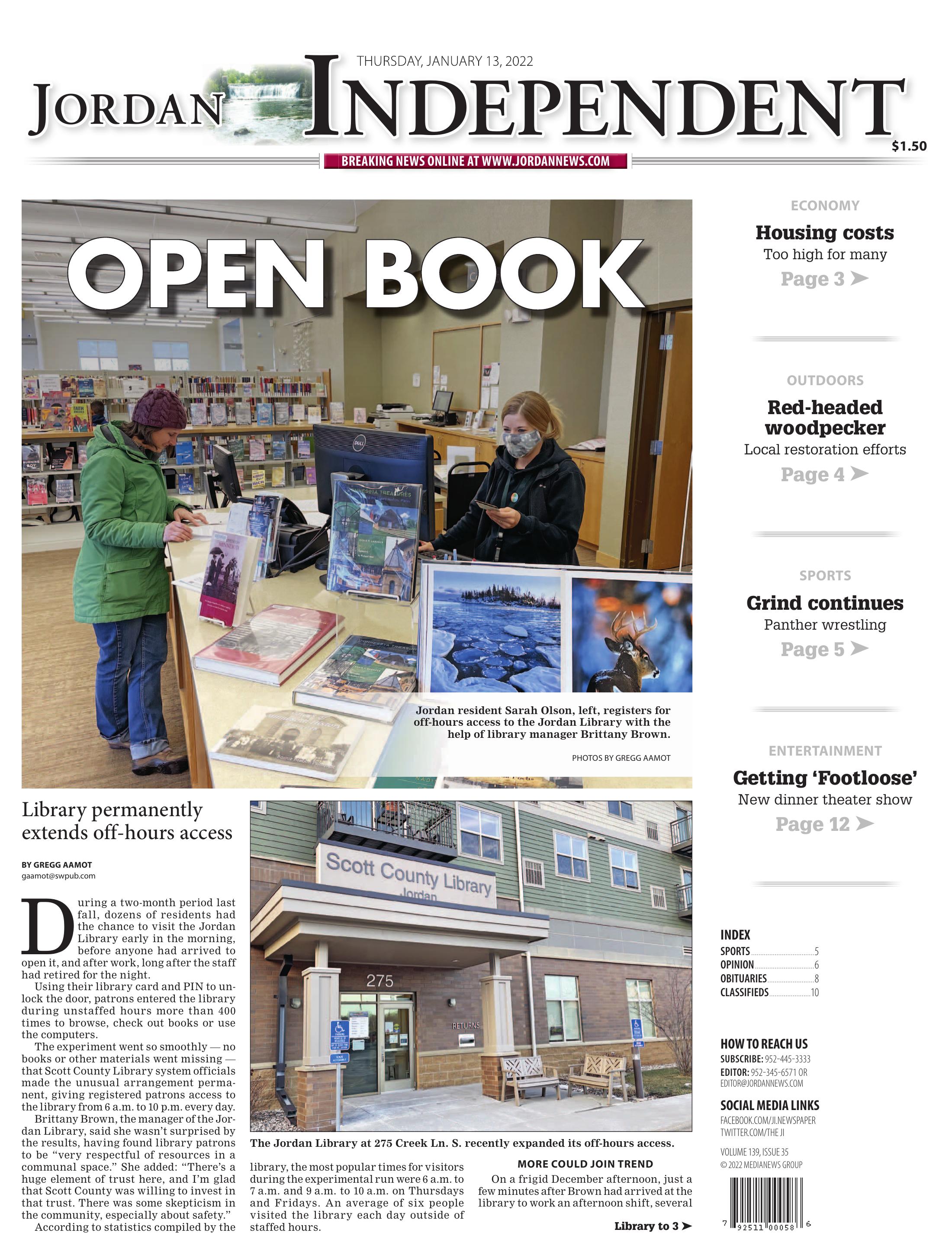 During a two-month period last fall, dozens of residents had the chance to visit the Jordan Library early in the morning, before anyone had arrived to open it, and after work, long after the staff had retired for the night.

Using their library card and PIN to unlock the door, patrons entered the library during unstaffed hours more than 400 times to browse, check out books or use the computers.

The experiment went so smoothly — no books or other materials went missing — that Scott County Library system officials made the unusual arrangement permanent, giving registered patrons access to the library from 6 a.m. to 10 p.m. every day.

Brittany Brown, the manager of the Jordan Library, said she wasn’t surprised by the results, having found library patrons to be “very respectful of resources in a communal space.” She added: “There’s a huge element of trust here, and I’m glad that Scott County was willing to invest in that trust. There was some skepticism in the community, especially about safety.”

According to statistics compiled by the library, the most popular times for visitors during the experimental run were 6 a.m. to 7 a.m. and 9 a.m. to 10 a.m. on Thursdays and Fridays. An average of six people visited the library each day outside of staffed hours.

On a frigid December afternoon, just a few minutes after Brown had arrived at the library to work an afternoon shift, several people showed up, including a few mothers with young children.

Beckie Gregory of Jordan, who was with daughters Sallie, 11, and Hosanna, 9, said she has visited the library more than a half-dozen times outside of traditional hours. “The (staffed) hours are a bit limited,” she said. “So it’s really nice to not have to work around that schedule.”

Sallie and Hosanna said they liked being able to visit the library whenever they got the chance. Their mom added, with a laugh: “I got my 16-year-old signed up (for after-hours access), too, and my mother-in-law. We’re all doing it!”

Scott County spent about $15,000 for the hardware, cameras and software that is needed to run the program and will pay roughly $12,000 annually to renew license fees.

The patrons who took part in the pilot project registered a few complaints with the library, such as the lack of ready supplies like printer paper on some evenings. But many offered up positive comments. “It is so great!” one person wrote. “I work 40 minutes from Jordan and frequently miss opening times and this has been wonderful to pickup (sic) holds and browse to get books.”

Scott County runs seven libraries, and some of those could join the off-hours trend, said Jake Grussing, the county’s library director.

The county’s facilities committee visited each of the libraries a few weeks ago to determine which ones might be best suited for extended access. Grussing said libraries in other rural communities like Belle Plaine, New Market and Elko are good candidates, though nothing has been determined.

The Jordan library made extended access permanent on Nov. 1.

In designing the model for the Jordan branch, the county got some help from the University of Minnesota’s Resilient Communities Project, which studied libraries with off-hours access in other states and in Scandinavian countries.

California and Georgia are two states in which the model has been used, Brown said. “We reached out to the libraries in those states to learn how it worked for them,” she said.

Full access was important, Grussing said. There’s nothing that irks him more, he said, than going to a 24-hour grocery store late at night — and finding the deli closed. Scott County wanted to avoid such a piecemeal approach so that the off-hours experience would be complete.

To use the service, card holders must register, attend a 15-minute orientation and sign a user agreement. (This can be done at any Scott County library). Then they can use their library card to enter the building during off hours. Cameras are mounted throughout the library, including the vestibule just inside the doorway.

“We feel really good about what we are doing,” Grussing said. “Not even paper clips wandered off (during the trial run).”