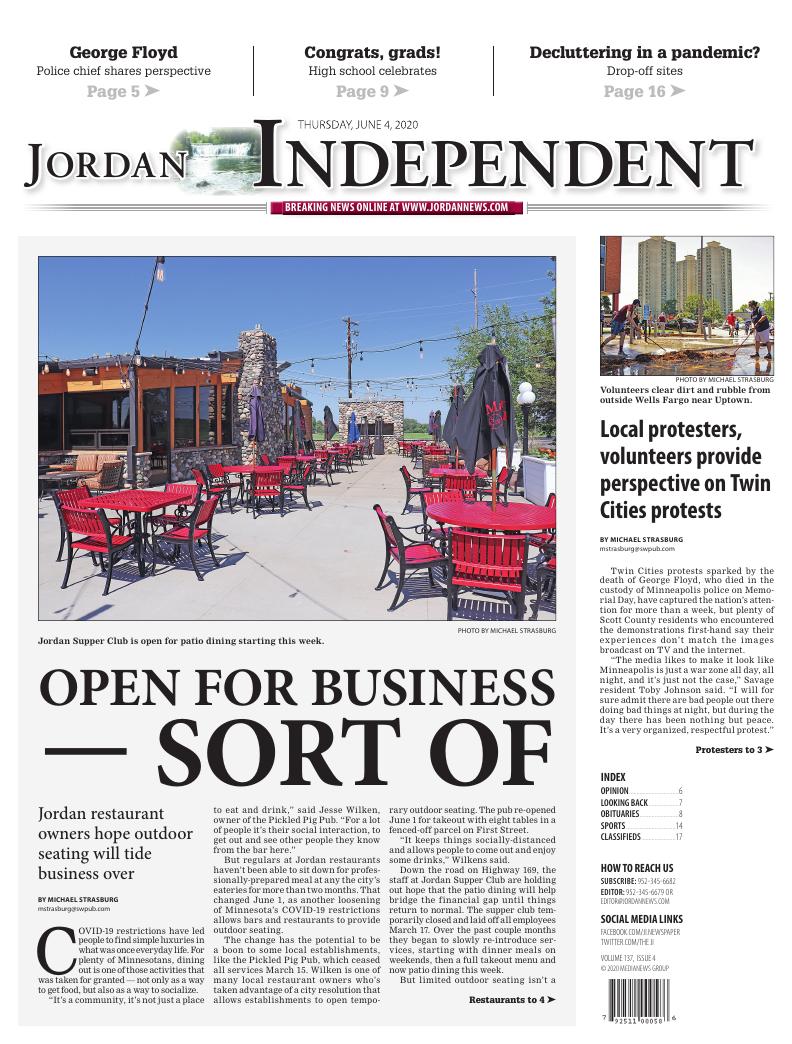 COVID-19 restrictions have led people to find simple luxuries in what was once everyday life. For plenty of Minnesotans, dining out is one of those activities that was taken for granted — not only as a way to get food, but also as a way to socialize.

“It’s a community, it’s not just a place to eat and drink,” said Jesse Wilken, owner of the Pickled Pig Pub. “For a lot of people it’s their social interaction, to get out and see other people they know from the bar here.”

But regulars at Jordan restaurants haven’t been able to sit down for professionally-prepared meal at any the city’s eateries for more than two months. That changed June 1, as another loosening of Minnesota’s COVID-19 restrictions allows bars and restaurants to provide outdoor seating.

The change has the potential to be a boon to some local establishments, like the Pickled Pig Pub, which ceased all services March 15. Wilken is one of many local restaurant owners who’s taken advantage of a city resolution that allows establishments to open temporary outdoor seating. The pub re-opened June 1 for takeout with eight tables in a fenced-off parcel on First Street.

“It keeps things socially-distanced and allows people to come out and enjoy some drinks,” Wilkens said.

Down the road on Highway 169, the staff at Jordan Supper Club are holding out hope that the patio dining will help bridge the financial gap until things return to normal. The supper club temporarily closed and laid off all employees March 17. Over the past couple months they began to slowly re-introduce services, starting with dinner meals on weekends, then a full takeout menu and now patio dining this week.

But limited outdoor seating isn’t a viable proposition for all restaurants. Clancy’s Bar and Pizza Parlor owner Randy Kaiser said the extra profits are not worth the hurdles for his business.

“We think there are a lot of hoops to jump through in order to get it the way we want,” Kaiser said. “Our curbside has been doing well enough that bringing people in from the patio — it’s a lot of run-around, it doesn’t really fit our system the way we’re doing it right now.”

Kaiser said that having guests enter through the front door to access the patio doesn’t gel with the successful curbside operation they’ve put in place because providing bathroom access would create unsafe traffic around the bar and current food preparation areas.

“There is just a little bit here and a little bit there and it adds up to a lot of bits,” Kaiser said. “I would love to start serving outside but the logistics of it doesn’t meet our expectations.”

But the pizza parlor has adapted in other ways, primarily by starting to offer delivery service every night.

“Sometimes it’s not too busy, but other nights you get 14-20 calls,” Kaiser said.

Keeping business afloat is tough enough with the industry’s historically narrow margins, but the idea of opening a restaurant at the outset of the pandemic is even more bleak. That said, Delia’s All-in-One was designed with takeout service as a priority, and they’ve managed to weather the storm about as well as they could hope under current circumstances.

Shortly after the Mexican restaurant opened on Valentine’s Day, its owners were surprised by how many of their patrons enjoyed dining in their limited space.

“We had a lot of customers who liked to have a seat and talk with their family and enjoy a good meal,” Manager Gabriel Lopez said. “What we’ve run into now is people order takeout and we see them eating in their cars or eating outside on their pickup truck, so we do see the need for some seating.”

This week Delia’s will expand to have outdoor seating on their porch, along with a canopy and about eight tables on their south lawn.

Whether or not these changes will be enough to keep local restaurants healthy remains to be seen. Several restaurant owners said they initially planned for a partial indoor opening June 1.

“I’d say 99% of all restaurants were blindsided by restrictions the governor put out,” Jordan Supper Club manager Joe Nowak said. “We were all expecting 50% capacity inside and outside. We hope it will be a boost. You put your best foot forward. Our other option is to close down. We’d rather make some money with an efficient team than close down and make no money.”

“I think everybody in the state was anticipating at this last announcement that hey were going to allow indoor seating at 50% capacity,” Wilkens said. “But when they came out with these rules instead we had the ability to do it and we just couldn’t afford to sit closed for another month or however long it’s going to be until we can have customers inside.”

Wilken said the current arrangement — which relies on good weather and severely limited seating in the crowded downtown area — is not ideal, but it’s better than nothing. He, and many other owners, still hope for an indoor opening soon.

“Generally speaking for all businesses — no, it’s not enough,” Wilkens said. “But if we can try to break even instead of making zero dollars a day, it’s something.” 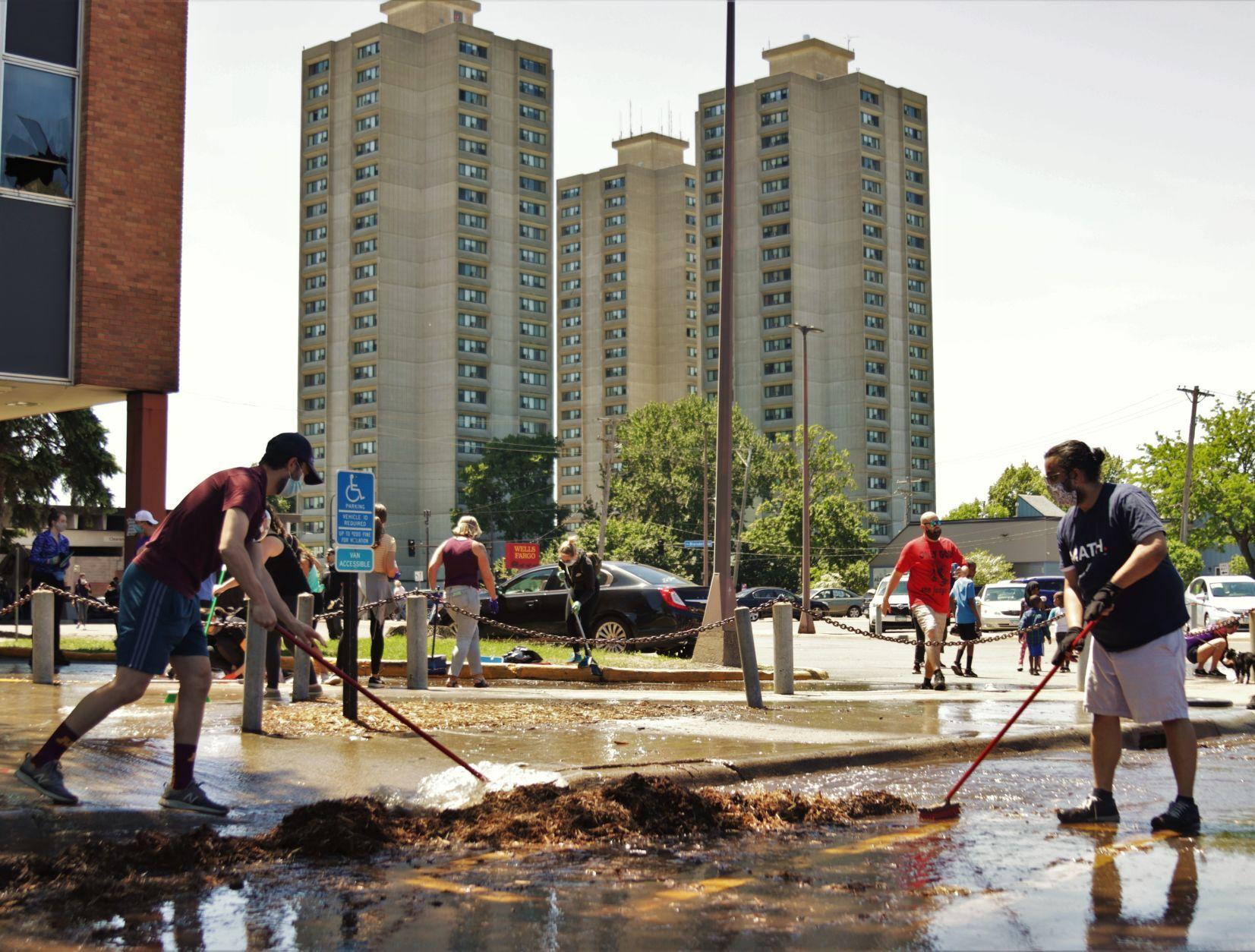 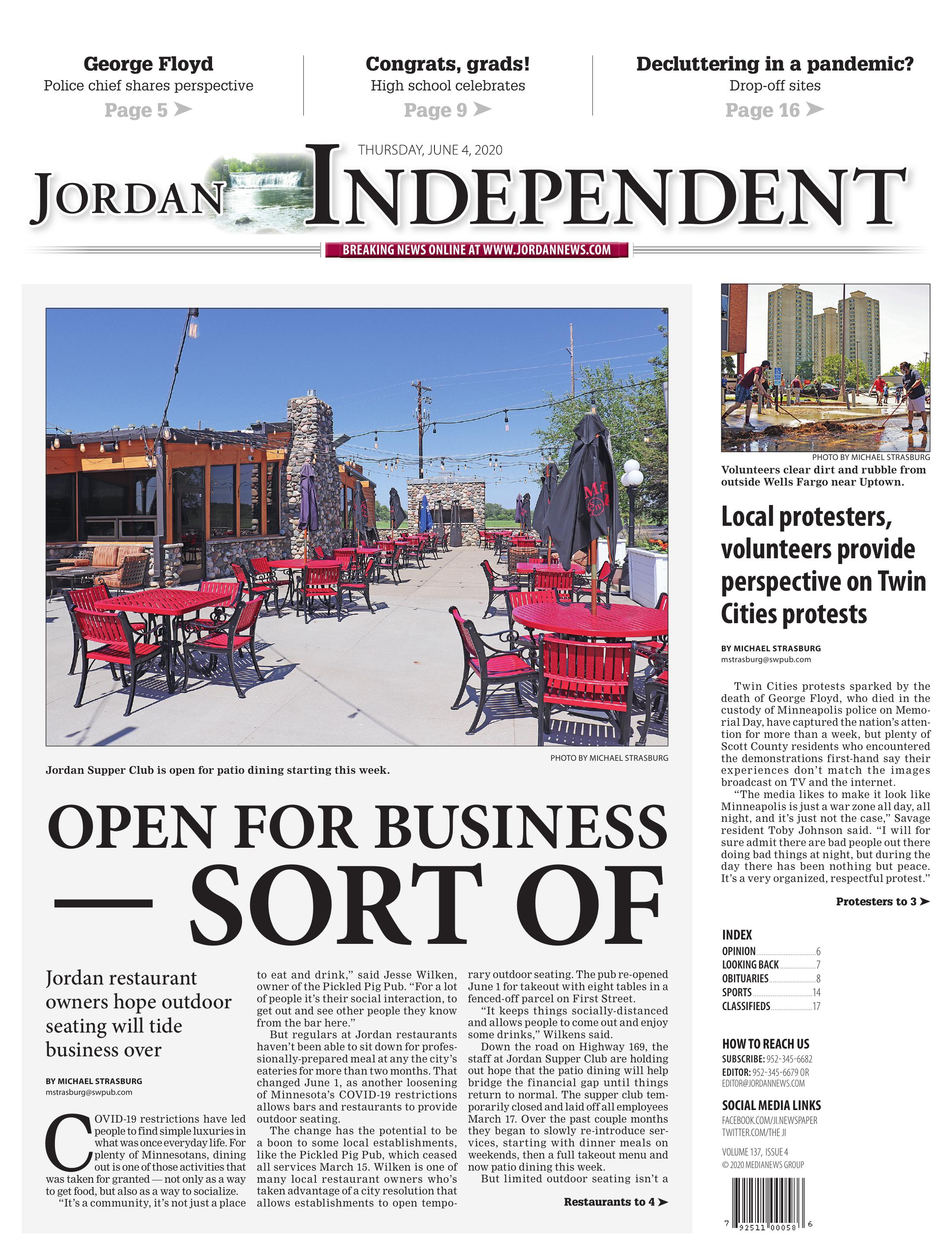