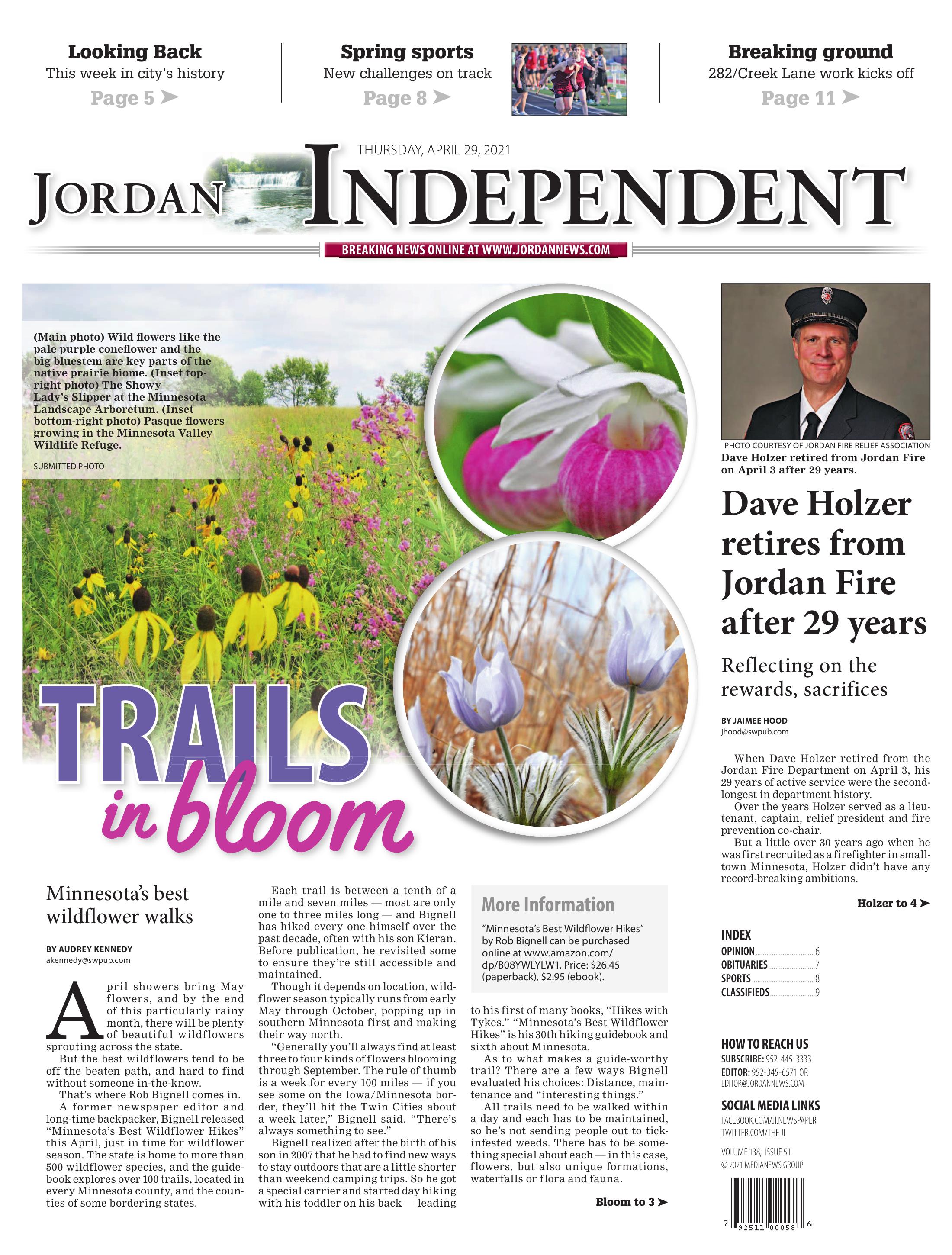 Wild flowers like the pale purple coneflower and the big bluestem are key parts of the native prairie biome.

Rob Bignell is the author of over 30 books, six about Minnesota.

The Showy Lady’s Slipper at the Minnesota Landscape Arboretum.

The cover of Minnesota’s Best Wildflower Hikes, by Rob Bignell. The book is available on Amazon.

The leaves of the Minnesota dwarf trout lily are mottled, resembling a trout — believed to be how the plant got its name. The rare flowers can be found at the Minnesota Landscape Arboretum.

April showers bring May flowers, and by the end of this particularly rainy month, there will be plenty of beautiful wildflowers sprouting across the state.

But the best wildflowers tend to be off the beaten path, and hard to find without someone in-the-know.

That’s where Rob Bignell comes in.

A former newspaper editor and long-time backpacker, Bignell released “Minnesota’s Best Wildflower Hikes” this April, just in time for wildflower season. The state is home to more than 500 wildflower species, and the guidebook explores over 100 trails, located in every Minnesota county, and the counties of some bordering states.

Each trail is between a tenth of a mile and seven miles — most are only one to three miles long — and Bignell has hiked every one himself over the past decade, often with his son Kieran. Before publication, he revisited some to ensure they’re still accessible and maintained.

Though it depends on location, wildflower season typically runs from early May through October, popping up in southern Minnesota first and making their way north.

“Generally you’ll always find at least three to four kinds of flowers blooming through September. The rule of thumb is a week for every 100 miles — if you see some on the Iowa/Minnesota border, they’ll hit the Twin Cities about a week later,” Bignell said. “There’s always something to see.”

Bignell realized after the birth of his son in 2007 that he had to find new ways to stay outdoors that are a little shorter than weekend camping trips. So he got a special carrier and started day hiking with his toddler on his back — leading to his first of many books, “Hikes with Tykes.” “Minnesota’s Best Wildflower Hikes” is his 30th hiking guidebook and sixth about Minnesota.

As to what makes a guide-worthy trail? There are a few ways Bignell evaluated his choices: Distance, maintenance and “interesting things.”

All trails need to be walked within a day and each has to be maintained, so he’s not sending people out to tick-infested weeds. There has to be something special about each — in this case, flowers, but also unique formations, waterfalls or flora and fauna.

“There’s wildflowers on virtually every trail, but there has to be something unique about it. Some have hundreds of Virginia bluebells, dwarf trout lilies, which only grow in three counties in Minnesota, or popular flowers like the pink lady slipper,” he said.

Because hiking with his son has been a goal since the beginning, many of the trails are very family friendly, he said, though it’s a good idea to plan some easy games or activities to keep them interested on the way.

Here are some of Rob Bignell’s wildflower trail recommendations for Scott County residents as spring approaches.

As you prepare for your walk, remember: don’t pick any wildflowers, stay on the trail, dress according to the weather, bring plenty of water and snacks and don’t leave anything but footprints behind.

Wildflowers common to a wetlands can be seen in the Louisville Swamp Unit of the Minnesota Valley National Wildlife Refuge. The 2.1-mile round trip Mazomani Trail Short Loop mostly runs along high, dry ground. There, rue anemone blooms in spring and goldenrod in summer.

From Shakopee, take Hwy. 169 south. Exit right/west onto Red Rock Drive. Turn left/west onto 145th Street. The road ends at the parking lot for the trailhead.

Warning: When waters are high, the lower portion of the trail, which runs alongside the Louisville Swamp’s shore, can be submerged.

Woodland flowers can be seen during May at Murphy Hanrehan Park Reserve in Savage. The reserve’s pond-dotted forest is perfect for spring ephemerals. Try the 3.25-mile round trip trail that runs between trail junctions 1-3-2-10-11-22.

From  Highway 13 and Egan Drive on the Prior Lake-Savage border, take the latter east. Turn right/south onto County Road 27/Dakota Avenue then left/east onto 154th Street, and right/south onto Murphy Lake Boulevard. Once in the park, take the first left/east and park. The trail leaves from the lot’s southeast corner.

Wildflowers can be enjoyed on the Greenway Trail, an urban route in New Prague. The 2.2-mile round trip trail is paved and runs alongside an intermittent stream and a few small ponds.

From the junction of Highway 17 and County Road 37, take the latter north. Turn at the second left/west and park near the trees. Walk west to Greenway Park and the trailhead. From there, the trail winds north through a residential area.

Five representatives of the city including Mayor Mike Franklin, City Administrator Tom Nikunen and council members Jeremiah Monyok, Matthew Schmitt and Amanda Schuh pose along with representatives from Scott County and MnDOT for a photo at the groundbreaking. 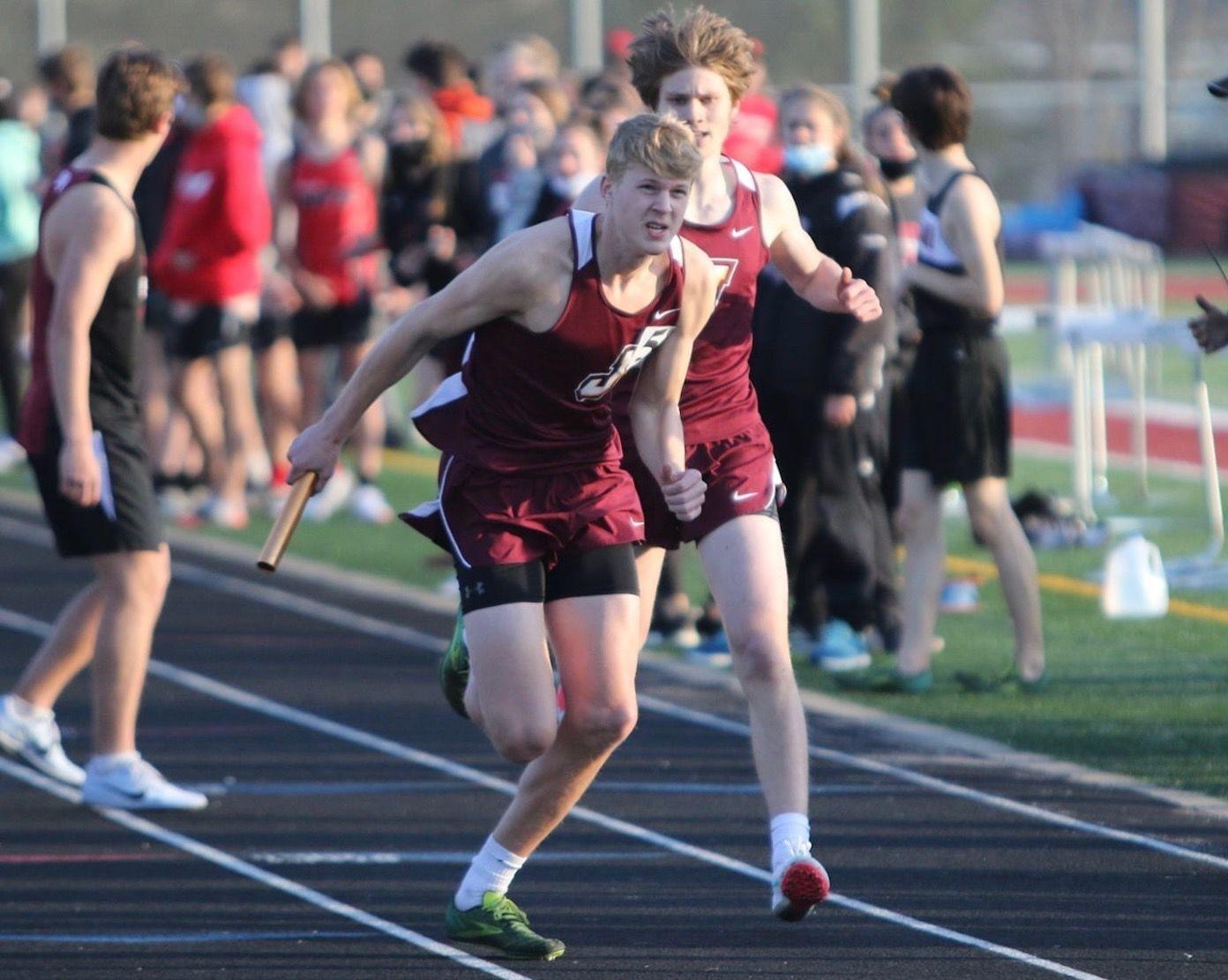 Dave Holzer retired from Jordan Fire on April 3 after 29 years.

When Dave Holzer retired from the Jordan Fire Department on April 3, his 29 years of active service were the second-longest in department history.

Over the years Holzer served as a lieutenant, captain, relief president and fire prevention co-chair.

But a little over 30 years ago when he was first recruited as a firefighter in small-town Minnesota, Holzer didn’t have any record-breaking ambitions.

His main ambition was to fill a need he saw in his community, and a way to give back.

Holzer grew up in Minnesota and moved around a bit before settling in Jordan in the 1990s, where he worked at Valley Bank. A coworker, Marge Huxley, whose husband Kurt was a member of Jordan Fire, found out he had been a firefighter, and recruited him to join the department.

“She said, ‘They have some openings and are doing try-outs, I think you should go try out,’” Holzer said.

April 3, 1992 was Holzer’s first day of membership with the department— 29 years later to the day, he would retire from a career that made an impact on his community.

Over his almost three decades with the department, Holzer remembers being part of many a hairy situation.

Among them, he remembers the 2001 fire at the Cedar Ridge Arabian horse barn in Jordan, where 80 horses ultimately perished before a team effort of area fire squads were able to control the blaze.

He says one of the most amazing parts of being a part of Jordan Fire has been witnessing the way departments in the surrounding areas help one another out in moments of emergency.

“It’s a kind of a cool thing to see happen, and to also be able to reciprocate that if they need us,” Holzer said. “Everyone kind of just works together and pitches in.”

Some of the most difficult calls were accident scenes that the department had to go out to, Holzer said.

Another one of the sacrifices that came with the territory was time away from family.

“Sometimes you’re sitting in church or you’re at work or you’re sitting down for dinner at home and the pager goes off and and you need to leave whatever you’re doing to go to the call,” Holzer said.

Though many challenges came along with the job, some aspects were extremely rewarding, Holzer said.

One of these aspects was the sense of family he found within the department.

“Everybody comes together when they need to,” Holzer said.

Support from the community was one of the biggest reasons he was able to stay with the department for such a long time.

“I just want to thank our family, friends and employers for all the years that they supported me when I was on the charge,” said Holzer.