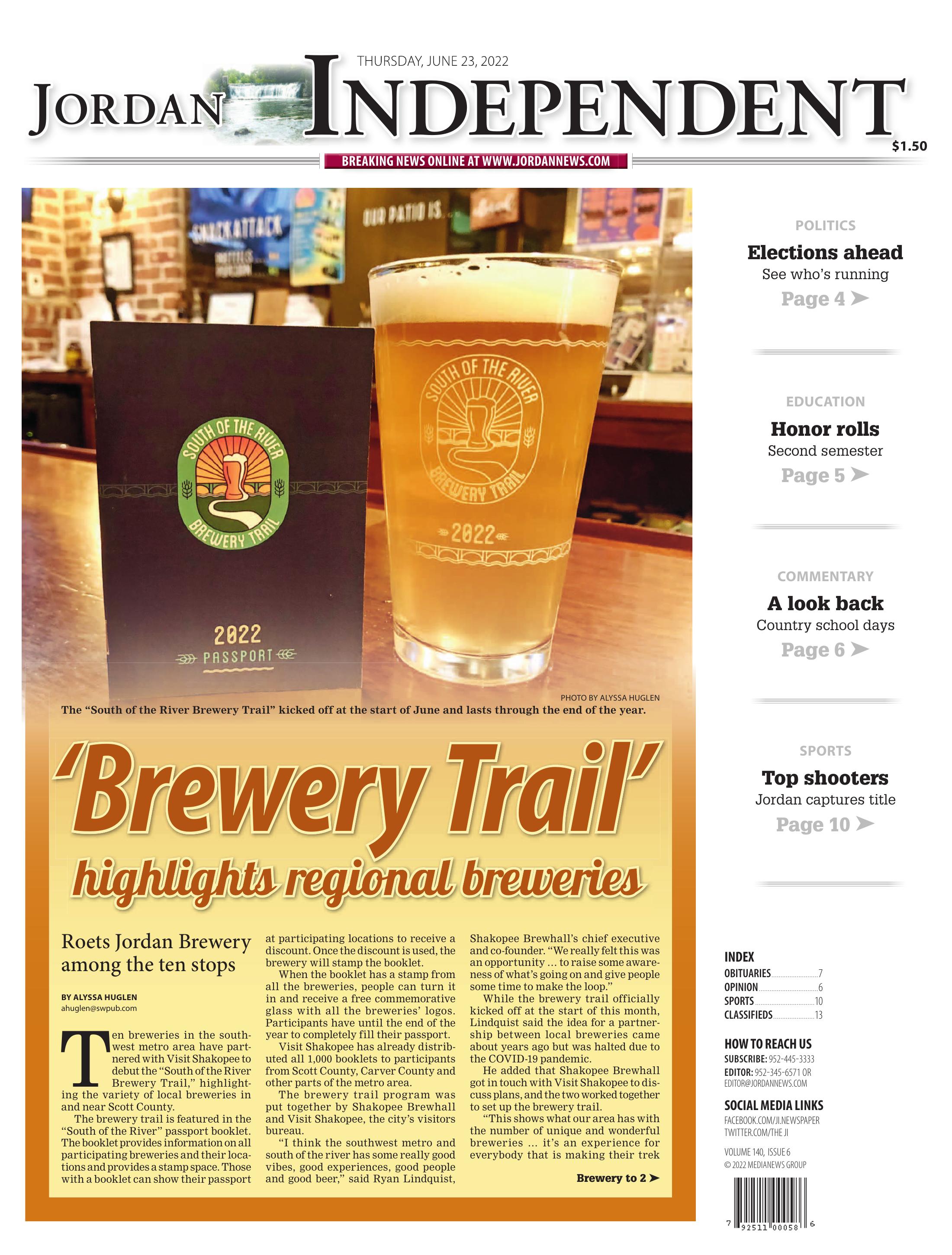 The “South of the River Brewery Trail” kicked off at the start of June and lasts through the end of the year.

After filling out the passport with all ten stamps from the breweries, participants will receive a commemorative glass with all the breweries’ logos on it.

This year’s passport booklet displays all of the ten participating breweries’ locations in and near Scott County.

Shakopee Brewhall is one of the participants in this year’s brewery trail. The brewery also worked with Visit Shakopee to initially set up this program.

Ten breweries in the southwest metro area have partnered with Visit Shakopee to debut the “South of the River Brewery Trail,” highlighting the variety of local breweries in and near Scott County.

The brewery trail is featured in the “South of the River” passport booklet. The booklet provides information on all participating breweries and their locations and provides a stamp space. Those with a booklet can show their passport at participating locations to receive a discount. Once the discount is used, the brewery will stamp the booklet.

When the booklet has a stamp from all the breweries, people can turn it in and receive a free commemorative glass with all the breweries’ logos. Participants have until the end of the year to completely fill their passport.

Visit Shakopee has already distributed all 1,000 booklets to participants from Scott County, Carver County and other parts of the metro area.

The brewery trail program was put together by Shakopee Brewhall and Visit Shakopee, the city’s visitors bureau.

“I think the southwest metro and south of the river has some really good vibes, good experiences, good people and good beer,” said Ryan Lindquist, Shakopee Brewhall’s chief executive and co-founder. “We really felt this was an opportunity … to raise some awareness of what’s going on and give people some time to make the loop.”

While the brewery trail officially kicked off at the start of this month, Lindquist said the idea for a partnership between local breweries came about years ago but was halted due to the COVID-19 pandemic.

He added that Shakopee Brewhall got in touch with Visit Shakopee to discuss plans, and the two worked together to set up the brewery trail.

“This shows what our area has with the number of unique and wonderful breweries … it’s an experience for everybody that is making their trek through this passport booklet going to each one of these breweries,” Shakopee Chamber President Tim Zunker said.

From there, Shakopee Brewhall reached out to other breweries about participating in the brewery trail.

Caitlin Drayna, Shakopee Brewhall’s taproom events coordinator in charge of engagement, communicated with other breweries on how to promote the booklets online and ensure every brewery was on the same page.

Drayna, who also occasionally tends bar, said she has already seen customers coming in with booklets ready to be stamped. She added that she hopes to see the brewery trail lead customers to all the different nearby breweries.

“They seem to be really excited about it,” she said. “We want them to come to the Shakopee Brewhall a lot, but at the same time, we also want them to branch out and try our neighbors because we have some really good breweries in the area.”

Lindquist said he’s also heard that people have approached other breweries with interest and enthusiasm for the brewery trail collaboration.

Visit Shakopee initially planned on printing 500 passport booklets but later decided on 1,000. Once the program launched in early June, all the booklets were requested within days.

According to Zunker, Visit Shakopee was not expecting the overwhelming response from the community.

“We plan on running this program again in 2023 and beyond, so this just gives us a good idea of what we can expect for numbers and how we’ll shape the brewery trail program and promotion in future years,” he said.

In addition to supporting breweries, Zunker said he hopes the brewery trail will bring people into the communities south of the river.

“What we want to do is highlight the things to do outside of those big attractions and focus on our downtowns … and parts of the community where the breweries are located,” he said. “We want to create that visitation and get people moving throughout the entire county and seeing everything that Scott County and the surrounding area has to offer for people, whether they’re locals or visitors.”