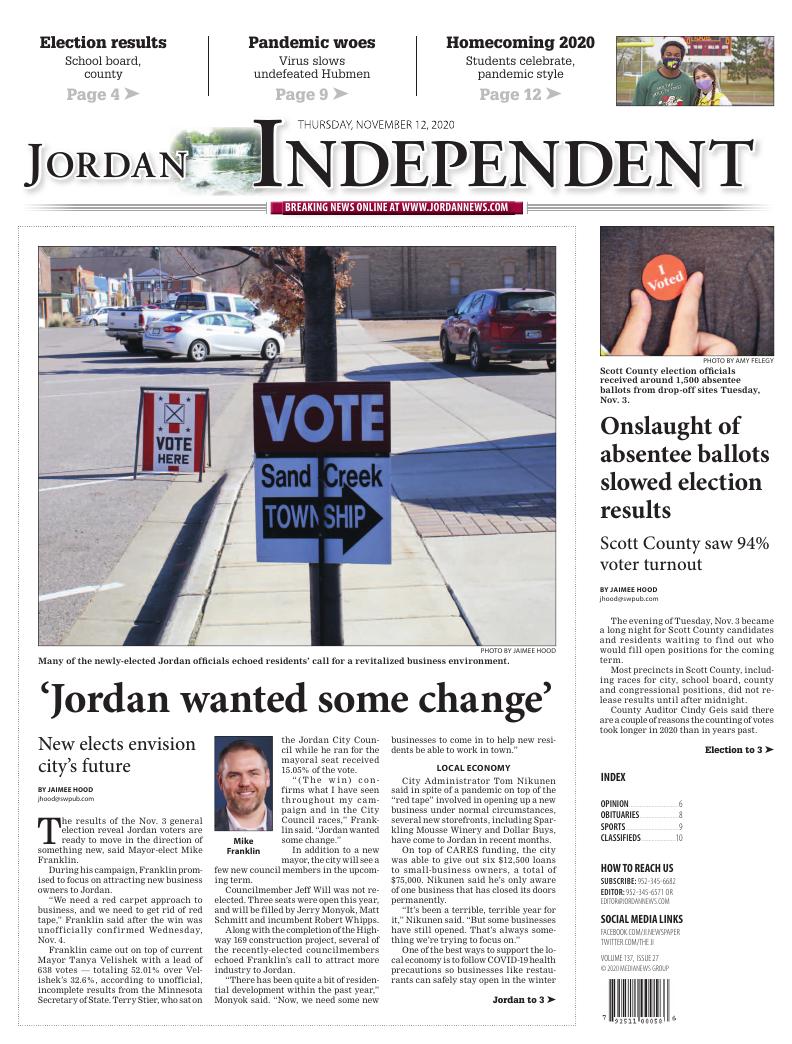 Many of the newly-elected Jordan officials echoed residents’ call for a revitalized business environment.

The results of the Nov. 3 general election reveal Jordan voters are ready to move in the direction of something new, said Mayor-elect Mike Franklin.

During his campaign, Franklin promised to focus on attracting new business owners to Jordan.

“We need a red carpet approach to business, and we need to get rid of red tape,” Franklin said after the win was unofficially confirmed Wednesday, Nov. 4.

Franklin came out on top of current Mayor Tanya Velishek with a lead of 638 votes — totaling 52.01% over Velishek’s 32.6%, according to unofficial, incomplete results from the Minnesota Secretary of State. Terry Stier, who sat on the Jordan City Council while he ran for the mayoral seat received 15.05% of the vote.

“(The win) confirms what I have seen throughout my campaign and in the City Council races,” Franklin said. “Jordan wanted some change.”

In addition to a new mayor, the city will see a few new council members in the upcoming term.

Councilmember Jeff Will was not re-elected. Three seats were open this year, and will be filled by Jerry Monyok, Matt Schmitt and incumbent Robert Whipps.

Along with the completion of the Highway 169 construction project, several of the recently-elected councilmembers echoed Franklin’s call to attract more industry to Jordan.

“There has been quite a bit of residential development within the past year,” Monyok said. “Now, we need some new businesses to come in to help new residents be able to work in town.”

City Administrator Tom Nikunen said in spite of a pandemic on top of the “red tape” involved in opening up a new business under normal circumstances, several new storefronts, including Sparkling Mousse Winery and Dollar Buys, have come to Jordan in recent months.

On top of CARES funding, the city was able to give out six $12,500 loans to small-business owners, a total of $75,000. Nikunen said he’s only aware of one business that has closed its doors permanently.

“It’s been a terrible, terrible year for it,” Nikunen said. “But some businesses have still opened. That’s always something we’re trying to focus on.”

One of the best ways to support the local economy is to follow COVID-19 health precautions so businesses like restaurants can safely stay open in the winter months, Nikunen said.

“If you’re not scared of dying from it, at least (wear a mask) to show that you’re scared of shutting down a small business,” said Nikunen. “Shutting down for 14 days because of a quarantine, that really affects everyone.”

Despite voters’ calls for change, Franklin says without the framework laid by the current council, moving forward would be much more difficult.

“None of this would be possible without the previous work of Mayor Tanya Velishek and Councilman Terry Stier,” Franklin said.

The mayor-elect asked Jordan residents to hold him accountable to the promises he made during his campaign.

“I’m always going to be receptive to constructive criticism,” Franklin said. “You have a voice beyond Election Day, so please work with me and with the council to enact what we think you voted for. 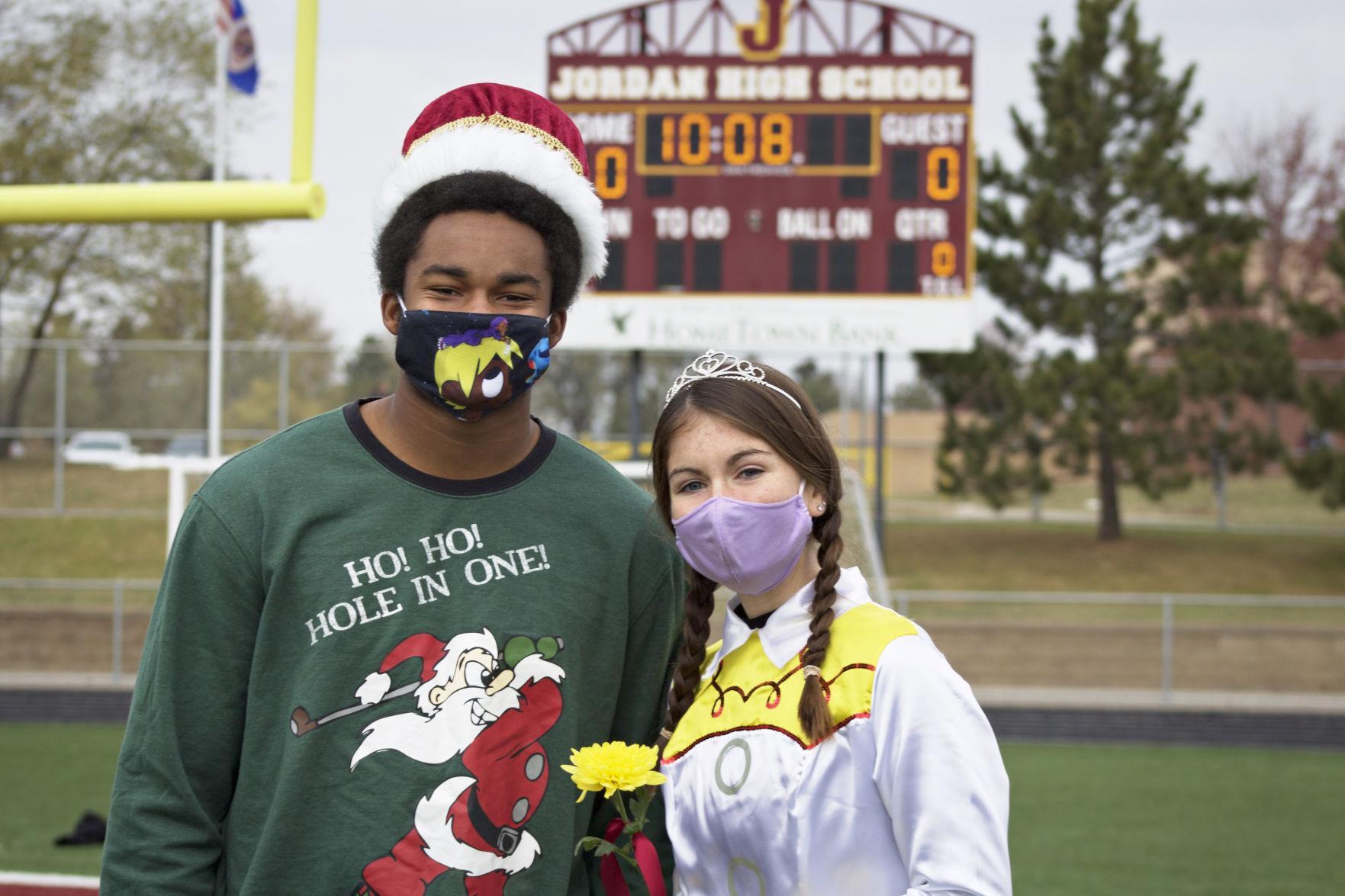 Homecoming King JoJo Kloeppel and Queen Abby Vizenor pose for a (masked) photo on the day of their coronation.

The evening of Tuesday, Nov. 3 became a long night for Scott County candidates and residents waiting to find out who would fill open positions for the coming term.

Most precincts in Scott County, including races for city, school board, county and congressional positions, did not release results until after midnight.

County Auditor Cindy Geis said there are a couple of reasons the counting of votes took longer in 2020 than in years past.

Multiple ballot drop-off locations throughout the county allowed voters to remain spread out in an effort to limit the spread of COVID-19, both early voting and on Election Day.

“We got nailed (Tuesday) with drop-offs,” said Geis. “Like, nailed.”

Scott County election officials got about 1,500 ballots that came in from these drop-off sites that needed to be processed and approved by the Ballot Board Tuesday afternoon. Geis said it was almost 7 p.m. Tuesday, Nov. 3 by the time these ballots were ready to begin being opened and recorded by county staff.

In some counties, there was a cut-off day for dropping off absentee ballots, and voters who did not do so before Election Day had to instead vote in-person at the polls.

Scott County allowed absentee ballot drop-off through Election Day, which meant there was an “onslaught” coming in at the last minute, Geis said.

“Usually on Election Day we barely receive any absentee ballots beyond what comes in the mail, which is usually very light by Tuesday,” said Geis. “We’re usually standing around just waiting to close our absentee polls after they are 100% counted. Not (Tuesday). (Tuesday), we were still processing because of the drop-offs.”

In addition to the counting of more drop-off absentee ballots than usual, election staff across the county were seeing long lines, especially in “huge precincts” like Credit River, Geis said.

There were some other snags with in-person voting — social-distancing requirements made lines so long that in one instance, they trickled out into the street, making driving around the polling location hazardous.

Geis also said some voters used their own ink pens rather than felt-tip pens on voting scanners, which made it so that Scott County staff had to take time to wipe down the equipment.

Voter turnout in Scott County was 94%, well above the state average of 76%.

“This number is an anomaly and it is unheard of in our county,” said Geis.

Despite all of its moving parts, Geis said she is proud of how the cities helped administrate this year’s election, and she’s heard positive feedback from voters so far on the flexibility the multiple drop-off locations provided.

“I think our readers and our voters are getting out to vote and taking advantage of all the options that we had to be able to cast their ballot in whatever fashion they choose,” said Geis.

As of Wednesday morning, the county still has a little over 2,800 ballots outstanding. Geis said they’re assuming half of those people went to the polls in-person, so those ballots won’t be returned, but they always have in the hundreds that never return their ballots “for one reason or another.”

Absentee ballots that were postmarked on or before Election Day have a seven-day grace period to be received and counted. Those ballots that are received before next Tuesday will be counted and processed, and the Minnesota Secretary of State election results website will reflect those updates sometime next week. 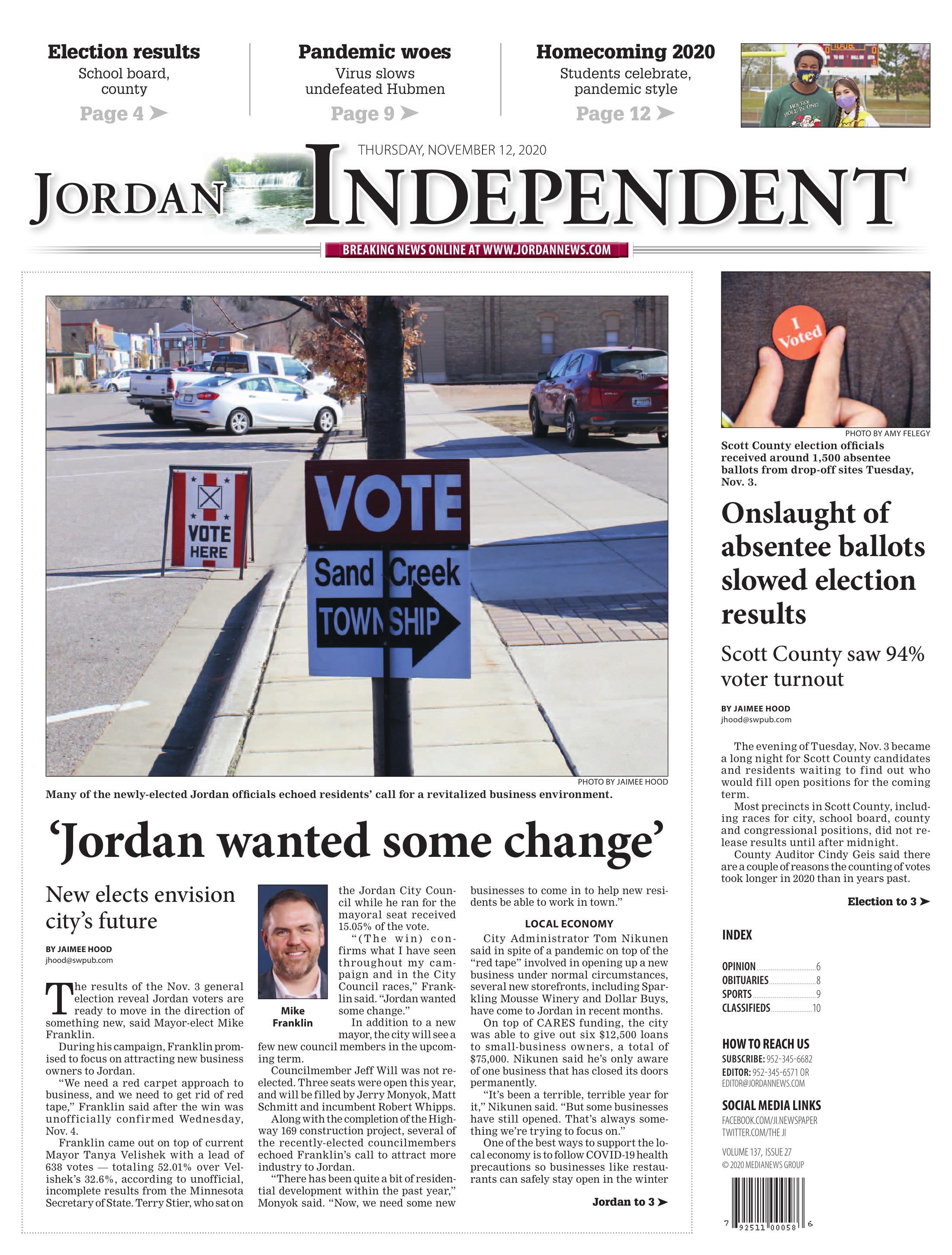