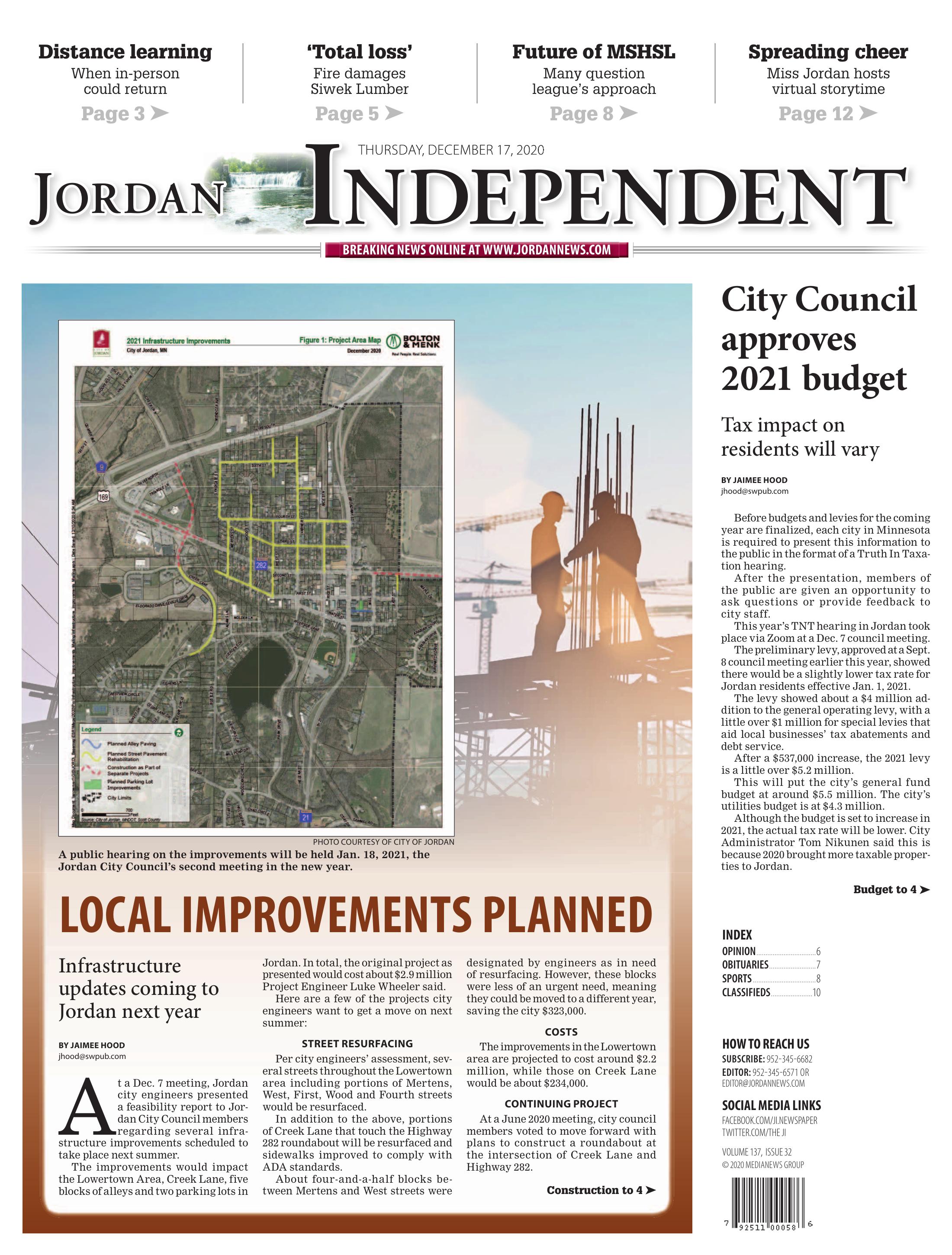 Before budgets and levies for the coming year are finalized, each city in Minnesota is required to present this information to the public in the format of a Truth In Taxation hearing. After the presentation, members of the public are given an opportunity to ask questions or provide feedback to city staff. This year’s TNT hearing in Jordan took place via Zoom at a Dec. 7 council meeting. The preliminary levy, approved at a Sept. 8 council meeting earlier this year, showed there would be a slightly lower tax rate for Jordan residents effective Jan. 1, 2021. The levy showed about a $4 million addition to the general operating levy, with a little over $1 million for special levies that aid local businesses’ tax abatements and debt service. After a $537,000 increase, the 2021 levy is a little over $5.2 million. This will put the city’s general fund budget at around $5.5 million. The city’s utilities budget is at $4.3 million. Although the budget is set to increase in 2021, the actual tax rate will be lower. City Administrator Tom Nikunen said this is because 2020 brought more taxable properties to Jordan. Though the overall tax rate will be lower, the actual tax impact on individual residents will vary — according to models produced by the county, 95% of Jordan residents will see a slight increase in the city taxes they pay, but the market value also increased for 95%. In comparison with surrounding cities, the average homeowner in Jordan pays more taxes than one in New Prague, but slightly less than one in Belle Plaine. At the end of the presentation the public was given an opportunity to ask questions, but none were present in the Zoom meeting, and no comments were sent to council members prior to the meeting. The council went on to approve the levy, as well as the general fund and utilities budgets for 2021. The general fund budget is set to increase expenditures by $153,338, or 2.9%. The additions will go toward the purchase of a police vehicle, city parks, equipment, increases to the fire emergency fund and some additional contingency funds, according to Finance Director Morey Schafer. Meanwhile, overall city expenditures on utilities are set to decrease slightly. Changes to the budget and the finalized levy will go into effect Jan. 1, 2021.

A public hearing on the improvements will be held Jan. 18, 2021, the Jordan City Council’s second meeting in the new year.

The improvements would impact the Lowertown Area, Creek Lane, five blocks of alleys and two parking lots in Jordan. In total, the original project as presented would cost about $2.9 million Project Engineer Luke Wheeler said.

Here are a few of the projects city engineers want to get a move on next summer:

Per city engineers’ assessment, several streets throughout the Lowertown area including portions of Mertens, West, First, Wood and Fourth streets would be resurfaced.

In addition to the above, portions of Creek Lane that touch the Highway 282 roundabout will be resurfaced and sidewalks improved to comply with ADA standards.

About four-and-a-half blocks between Mertens and West streets were designated by engineers as in need of resurfacing. However, these blocks were less of an urgent need, meaning they could be moved to a different year, saving the city $323,000.

The improvements in the Lowertown area are projected to cost around $2.2 million, while those on Creek Lane would be about $234,000.

At a June 2020 meeting, city council members voted to move forward with plans to construct a roundabout at the intersection of Creek Lane and Highway 282.

According to the most recent city newsletter, the roundabout will help address both short- and long-term goals.

“In the short term, the roundabout will reduce delay for Creek Lane motorists and reduce the severity of crashes, and allow truck movements through the intersection to continue,” the newsletter said.

“From a long term view, the roundabout will position the area for the new interchange at 169/282/9 and manage a steady stream of traffic long into the future as traffic volumes in the growing community continue to similarly grow,” it said.

As of that June meeting, the city still needed to come up with funding for the roundabout project.

Approved this summer, the roundabout will begin construction next summer.

The city is slated to pay about $77,900 to improve the historic brewery parking lot located near 401 Broadway St S, which is nearing a deadline for changes to parking requirements.

The brewery will eventually be assessed for 100% of the costs, City Engineer Mike Waltman said.

Downtown parking and the alley between Broadway and Mill streets will also be improved and outfitted with new storm drains to help with drainage during snow and rain events.

According to engineers’ assessments, the Broadway/Mill Street alley will need to be paved in concrete to aid with storm drainage, while others were assessed to need bituminous pavement.

“In some ways it’s seemingly random where we put storm sewers and where we don’t from a resident’s perspective,” Waltman said. “But from our perspective, there’s some functional reasons we need a storm sewer there and we can’t drain otherwise.”

Over the past couple of years, the city has assessed a potential need to re-pave gravel alleyways which cause headaches to public works employees during storm events.

Initially, the city’s Capital Improvement Plan called for six blocks of alley per year to be improved until all the improvements were complete. In 2020 the council asked to scale that number back to four per year, so that over the next three years, the total 12 blocks of alley would be re-paved, Waltman said.

Under the current policy, the city standardly pays for 70% of the cost of improvements, while citizens pay 30% of the cost.

Additionally, council member Robert Whipps pointed out the city prioritizes re-paving alleys where at least 50% of homeowners want the project to take place before considering undertaking a project.

“I think we’ve been discussing this for two years and we come to the same conclusion every time,” council member Jeff Will said.

Mayor Tanya Velishek urged council members to “make a decision and move on” from the issue at the Dec. 7 meeting.

The issue of payment for the alleys was a sticking point during the council’s discussion on Dec. 7.

“To slap somebody with an expensive assessment just so their neighbor has access to (the alley way) just doesn’t seem all that fair to me,” council member Jeremy Goebel said.

“All we’re doing is ticking off our residents . . . then the arguments come over who gets the benefit,” said Will. “If the city wants it paved, pave the damn thing.”

Council member Terry Stier said he agreed with Will’s call for the city to absorb some of the costs to benefit Jordan residents in the long-run.

“If the city deems it’s necessary to have all these alleyways paved, then pave the darn things. Get it over with. It’s gonna benefit the homeowner in the long run,” said Stier.

After more back-and-forth, Will moved to accept the feasibility report with the exception of all alley improvements, which he said should be handled by the new council.

Whipps moved to add only the alley attached to the Broadway/Mill Street parking lot back in.

“If we’re gonna pay for the parking lot, we might as well have a turnout that’s nice,” Whipps said.

The council voted on moving forward with all aspects of the feasibility report except the alleys (including only the Broadway/Mill Street alley as an extension of the parking lot improvements).

The vote was 4-3, with Will, Whipps, Stier and Goebel voting yes, and Velishek and council members Bill Heimkes and Amanda Schuh voting nay.

A public hearing will take place Jan. 18, 2021 where Jordan residents can pose questions and concerns to the council about the improvements.

After that hearing, the improvement plans will be finalized. Construction on these projects is set to occur between May and Nov. of next year.