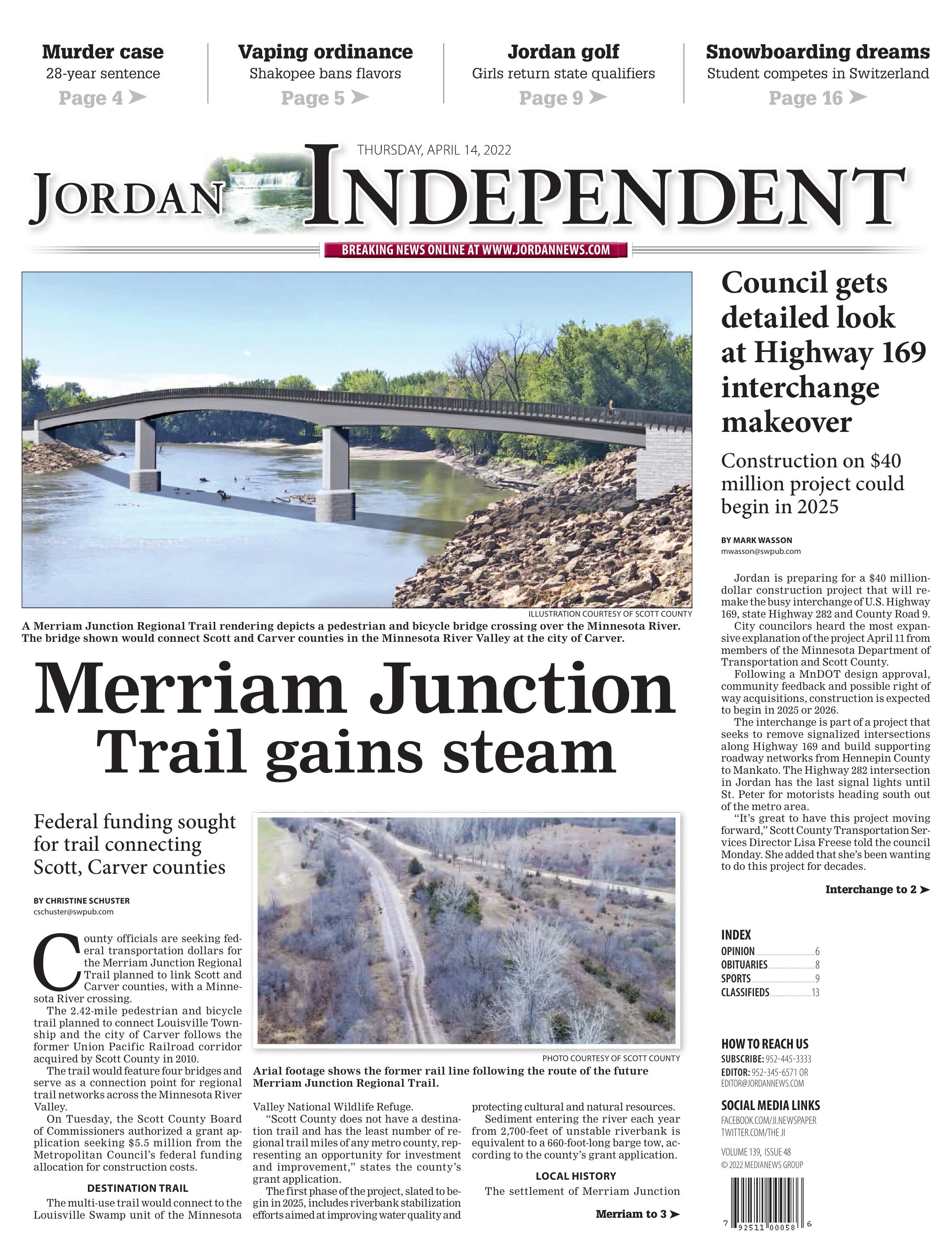 The 2.42-mile pedestrian and bicycle trail planned to connect Louisville Township and the city of Carver follows the former Union Pacific Railroad corridor acquired by Scott County in 2010.

The trail would feature four bridges and serve as a connection point for regional trail networks across the Minnesota River Valley.

On Tuesday, the Scott County Board of Commissioners authorized a grant application seeking $5.5 million from the Metropolitan Council’s federal funding allocation for construction costs.

The multi-use trail would connect to the Louisville Swamp unit of the Minnesota Valley National Wildlife Refuge.

“Scott County does not have a destination trail and has the least number of regional trail miles of any metro county, representing an opportunity for investment and improvement,” states the county’s grant application. The first phase of the project, slated to begin in 2025, includes riverbank stabilization efforts aimed at improving water quality and protecting cultural and natural resources.

Sediment entering the river each year from 2,700-feet of unstable riverbank is equivalent to a 660-foot-long barge tow, according to the county’s grant application.

The settlement of Merriam Junction sprang up in the northwestern part of Louisville Township during the mid-to-late 19th century at the crossing of two major railroad lines.

At the community’s height, an average of 20 trains went through Merriam Junction each day, according to the Scott County Historical Society. 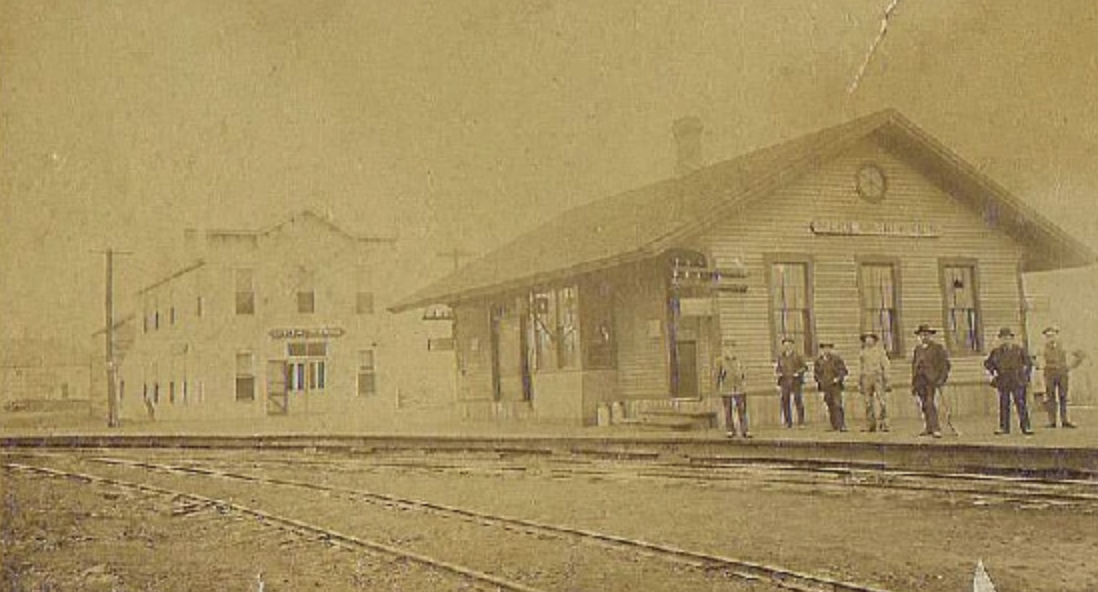 A two-story hotel and a post office were among the short-lived features of the community, which crumbled into a ghost town with the rise of the automobile.

Plans for the Merriam Junction Regional Trail gained steam in 2007 when a trestle south of Carver collapsed, severing the railroad line. Then, in 2011, the railroad bridge crossing the Minnesota River at Carver was demolished.

Four bridges are planned for the Merriam Junction Regional Trail; two bridges will be newly built and two will be replacements of existing bridges.

The Metropolitan Council is accepting applications through April 14 for road, bridge, transit and trail projects seeking a portion of the agency’s federal funding allocation.

The Transportation Advisory Board will select projects for funding in late 2022.

A view looking north of the planned upgrade to the U.S. Highway 169/state Highway 282 interchange in Jordan.

Jordan is preparing for a $40 million-dollar construction project that will re-make the busy interchange of U.S. Highway 169, state Highway 282 and County Road 9.

City councilors heard the most expansive explanation of the project April 11 from members of the Minnesota Department of Transportation and Scott County.

Following a MnDOT design approval, community feedback and possible right of way acquisitions, construction is expected to begin in 2025 or 2026.

The interchange is part of a project that seeks to remove signalized intersections along Highway 169 and build supporting roadway networks from Hennepin County to Mankato. The Highway 282 intersection in Jordan has the last signal lights until St. Peter for motorists heading south out of the metro area.

“It’s great to have this project moving forward,” Scott County Transportation Services Director Lisa Freese told the council Monday. She added that she’s been wanting to do this project for decades.

Funding for the project will come from several local, state and federal sources with Jordan footing $3 million of the bill and Scott County sales taxes covering $11 million.

The project will get $1.124 million in federal funds for a pedestrian underpass at the interchange from the recent transportation bill passed by the U.S. Congress and signed by President Joe Biden.

The project is short $7 million to $11 million, officials said, so a $9.1 million dollar funding request has been sent to state Sen. Eric Pratt (R-Prior Lake), who represents the district where the interchange is planned.

Pratt said he’s been working with the Senate’s Capital Investment Committee about the interchange project and two others: a Bluff Drive/Jordan Avenue overpass and a County State Aid Highway 59 interchange. The funding gap for all three projects is around $16 million, $9.1 million of which is needed for the Highway 169/282 interchange.

“I don’t know if I can get the whole thing,” Pratt told the Independent. “We had the bonding committee out here looking at a couple of the segments of the project and how they impact the safety of Jordan residents and so I’m really hopeful that we’re going to be able to get the funding through.”

In response to questions from councilors Amanda Schuh and Jeremy Goebel, Freese said that the project team plans to work with the city, including official meetings with local politicians and two open houses scheduled for fall 2022 and spring 2023.

“We will be peeling the onion back on some questions and ask ‘Does this make sense?’” Freese told the council.

Mayor Mike Franklin said that while the interchange project is about safety, economic efficiency and creating a smoother corridor for commercial transportation, it’s also about economic growth.

“That highway corridor is our primary area where we can expect to reasonably grow and add businesses and we’re not going to get that growth without figuring out this intersection first,” Franklin told the Independent. “So it’s in our interest to figure it out and if it can be done safely and in a way that accommodates our existing businesses and serves our existing businesses then I think we should all be excited about it.”