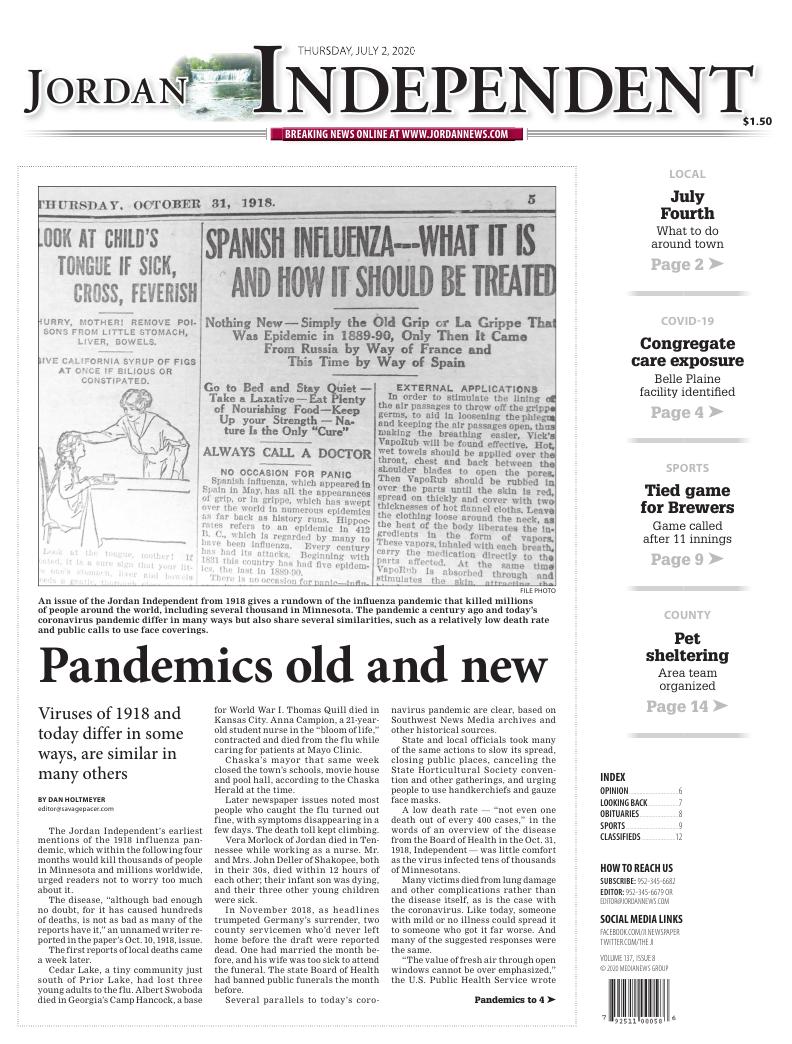 The Jordan Independent’s earliest mentions of the 1918 influenza pandemic, which within the following four months would kill thousands of people in Minnesota and millions worldwide, urged readers not to worry too much about it.

The disease, “although bad enough no doubt, for it has caused hundreds of deaths, is not as bad as many of the reports have it,” an unnamed writer reported in the paper’s Oct. 10, 1918, issue.

The first reports of local deaths came a week later.

Cedar Lake, a tiny community just south of Prior Lake, had lost three young adults to the flu. Albert Swoboda died in Georgia’s Camp Hancock, a base for World War I. Thomas Quill died in Kansas City. Anna Campion, a 21-year-old student nurse in the “bloom of life,” contracted and died from the flu while caring for patients at Mayo Clinic.

Chaska’s mayor that same week closed the town’s schools, movie house and pool hall, according to the Chaska Herald at the time.

Later newspaper issues noted most people who caught the flu turned out fine, with symptoms disappearing in a few days. The death toll kept climbing.

Vera Morlock of Jordan died in Tennessee while working as a nurse. Mr. and Mrs. John Deller of Shakopee, both in their 30s, died within 12 hours of each other; their infant son was dying, and their three other young children were sick.

In November 2018, as headlines trumpeted Germany’s surrender, two county servicemen who’d never left home before the draft were reported dead. One had married the month before, and his wife was too sick to attend the funeral. The state Board of Health had banned public funerals the month before.

Several parallels to today’s coronavirus pandemic are clear, based on Southwest News Media archives and other historical sources.

State and local officials took many of the same actions to slow its spread, closing public places, canceling the State Horticultural Society convention and other gatherings, and urging people to use handkerchiefs and gauze face masks.

A low death rate — “not even one death out of every 400 cases,” in the words of an overview of the disease from the Board of Health in the Oct. 31, 1918, Independent — was little comfort as the virus infected tens of thousands of Minnesotans.

Many victims died from lung damage and other complications rather than the disease itself, as is the case with the coronavirus. Like today, someone with mild or no illness could spread it to someone who got it far worse. And many of the suggested responses were the same.

“The value of fresh air through open windows cannot be over emphasized,” the U.S. Public Health Service wrote at the time. More than 100 years later, epidemiologist Michael Osterholm, director of the University of Minnesota’s Center for Infectious Disease Research and Policy, had almost identical advice.

“This is really all about air,” Osterholm told NPR’s “Fresh Air” in June, adding even a little breeze through a window or outdoors can essentially disintegrate clouds of virus from an infected person. “It’s the air that we share with each other that is critical. That’s why distancing is so important.”

Today’s many arguments over business and gathering restrictions aren’t unique, either.

Football teams in late 1918 ignored a Minneapolis ban on playing, for example, according to a 2007 review of the local response in the science journal Public Health Reports. Hennepin County’s school board reopened its schools until police reversed them.

There are several differences between then and now, some more obvious than others.

Experts at the time thought the flu was caused by a bacteria instead of a virus, while scientists today know the coronavirus’s molecular innards down to their individual atoms. Antiviral drugs, the Centers for Disease Control and Prevention and laws shielding victims’ names and stories from the public were all decades away.

Today’s pandemic, at least in Minnesota, is also less severe in many ways than 1918’s.

The state Board of Health that year reported more than 7,000 flu deaths, according to the Independent; that November, more people died overall than were born.

The Minnesota Department of Health this year has counted more than 1,400 COVID-19-related deaths, which have trended downward since May. Carver and Scott counties saw at least 900 known cases and five deaths as of June 26.

Known cases and hospitalizations have spiked in Texas, Arizona and other states in the meantime, according to The Associated Press and other news media, which highlights other similarities with the previous pandemic.

The 1918 flu, which might have started in Kansas, hit other states and much of the world in a first wave that Minnesota missed. But Minnesota caught the deadlier second wave that autumn.

The Independent reported the flu then faded before a Prior Lake barber, a Savage marshal and others died in December 1918 during a third wave. Jordan during the following February saw around 100 cases and a few deaths before the pandemic ended for good.

“We don’t know that we peaked,” she said. “It’s highly possible that we could see the pattern shift again.”

State and federal health officials have urged the public to avoid large groups, wear face masks in public and take other steps to try to prevent such a resurgence.

The Minnesota Medical Association, which represents physicians, on June 26 called on public and business leaders to require mask use. Researchers have found masks can prevent the wearer from spreading the virus to others, which can happen even when the wearer feels no symptoms.

As 1918’s pandemic waned, with a U.S. death toll of 300,000 or more, the Independent offered a final assessment: “People have learned that it is best to take extraordinary precautions. The result is that there are fewer serious cases.” 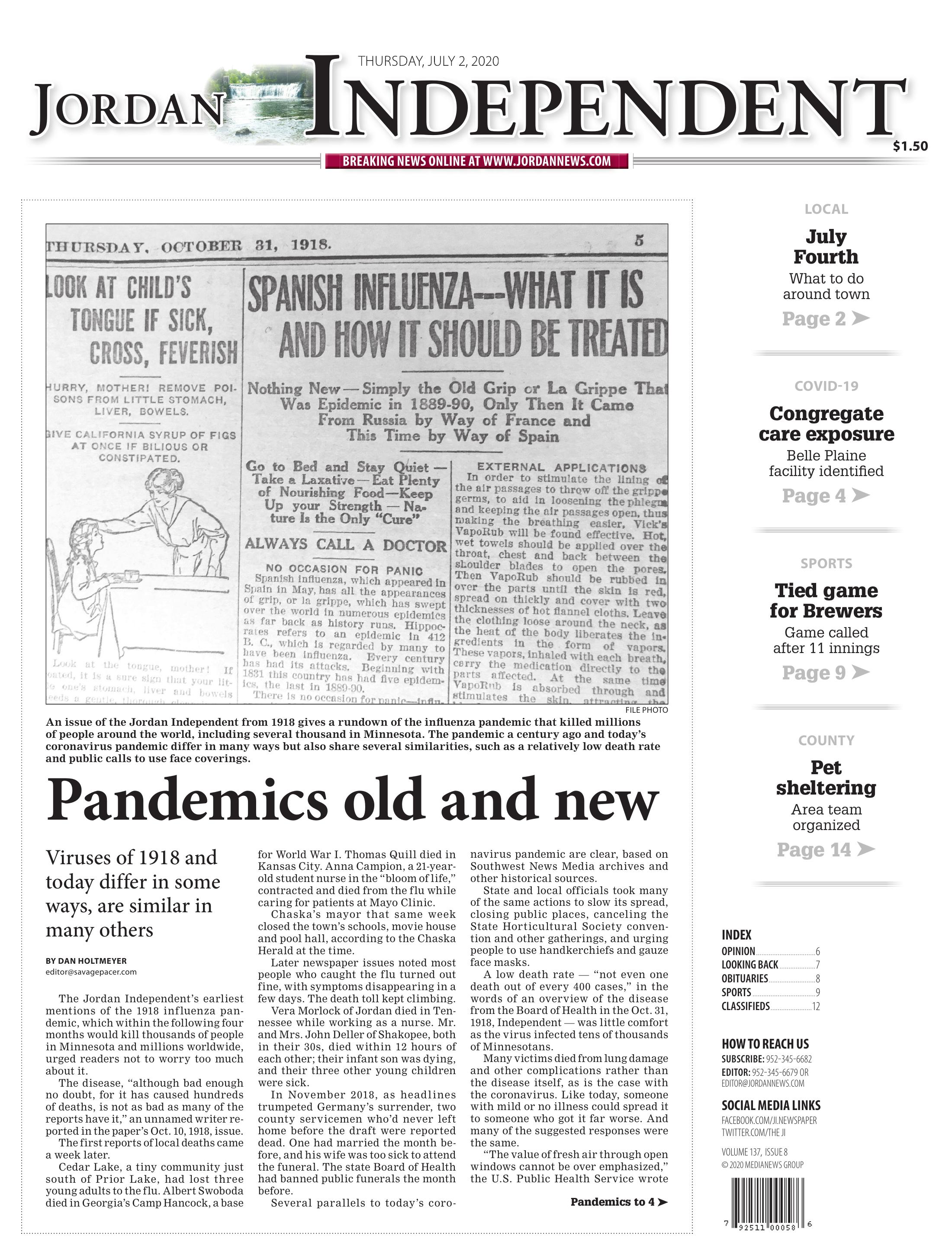