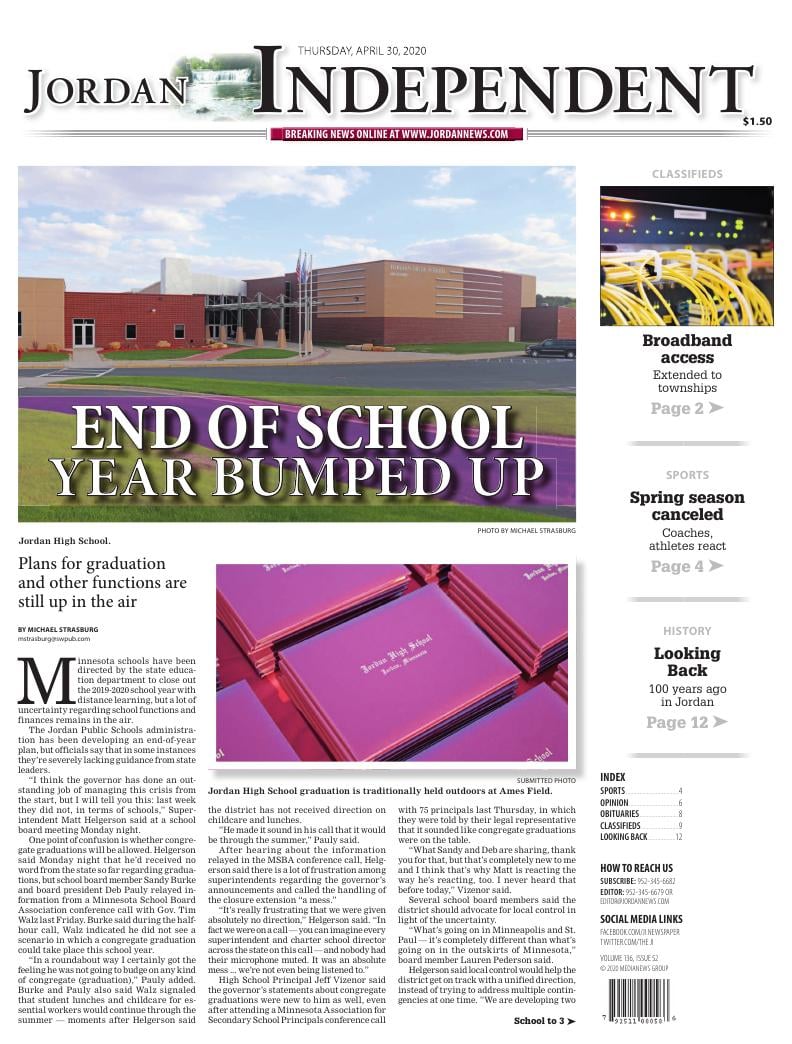 Education
top story
End of Jordan school year is bumped up, graduation plans are still up in the air
By Michael Strasburg mstrasburg@swpub.com

Jordan High School seniors hoping to toss their graduation caps up in the air at Ames Field — like the Class of 2019 — may be disappointed this year, as congregate graduations could be prohibited.

Minnesota schools have been directed by the state education department to close out the 2019-2020 school year with distance learning, but a lot of uncertainty regarding school functions and finances remains in the air.

The Jordan Public Schools administration has been developing an end-of-year plan, but officials say that in some instances they're severely lacking guidance from state leaders.

"I think the governor has done an outstanding job of managing this crisis from the start, but I will tell you this: last week they did not, in terms of schools," Superintendent Matt Helgerson said at a school board meeting Monday night.

One point of confusion is whether congregate graduations will be allowed. Helgerson said Monday night that he'd received no word from the state so far regarding graduations, but school board member Sandy Burke and board president Deb Pauly relayed information from a Minnesota School Board Association conference call with Gov. Tim Walz last Friday. Burke said during the half-hour call, Walz indicated he did not see a scenario in which a congregate graduation could take place this school year.

"In a roundabout way I certainly got the feeling he was not going to budge on any kind of congregate (graduation)," Pauly added.

Burke and Pauly also said Walz signaled that student lunches and childcare for essential workers would continue through the summer — moments after Helgerson said the district has not received direction on childcare and lunches.

"He made it sound in his call that it would be through the summer," Pauly said.

After hearing about the information relayed in the MSBA conference call, Helgerson said there is a lot of frustration among superintendents regarding the governor's announcements and called the handling of the closure extension "a mess."

"It's really frustrating that we were given absolutely no direction," Helgerson said. "In fact we were on a call — you can imagine every superintendent and charter school director across the state on this call — and nobody had their microphone muted. It was an absolute mess ... we're not even being listened to."

"What Sandy and Deb are sharing, thank you for that, but that's completely new to me and I think that's why Matt is reacting the way he's reacting, too. I never heard that before today," Vizenor said.

Several school board members said the district should advocate for local control in light of the uncertainty.

Helgerson said local control would help the district get on track with a unified direction, instead of trying to address multiple contingencies at one time.

"We are developing two to three plans for every little milestone and we just can't sustain this, we need to have some concrete answers and guidance," Helgerson said.

And time is of the essence. The administration has a little over a week, Helgerson said Monday night, to draft a graduation plan and set it in motion.

One area in which the school district does have local authority is with the school calendar. The last day of instruction for students was originally scheduled for Thursday, June 4, but the district’s instructional requirements are on track to be satisfied by May 29.

The board voted Monday night to effectively end the school year on May 22. Make-ups, interventions and remedial instruction will be carried out through May 27 and final grades will be prepared by May 29.

"I like the idea of having the couple days in there to buffer the kids who are struggling and trying to get balance and caught up to the state level and focusing on them," Pauly said. 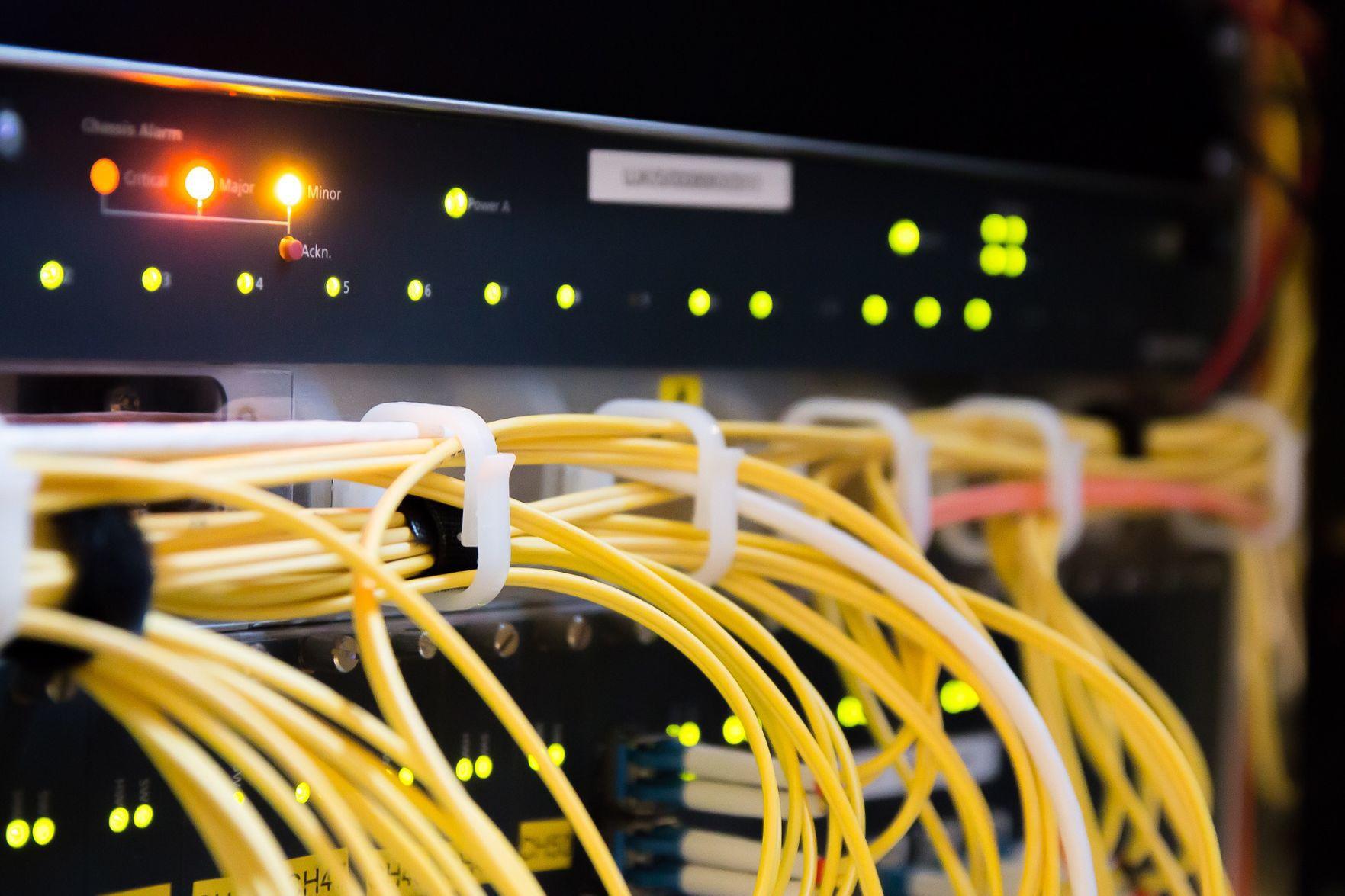 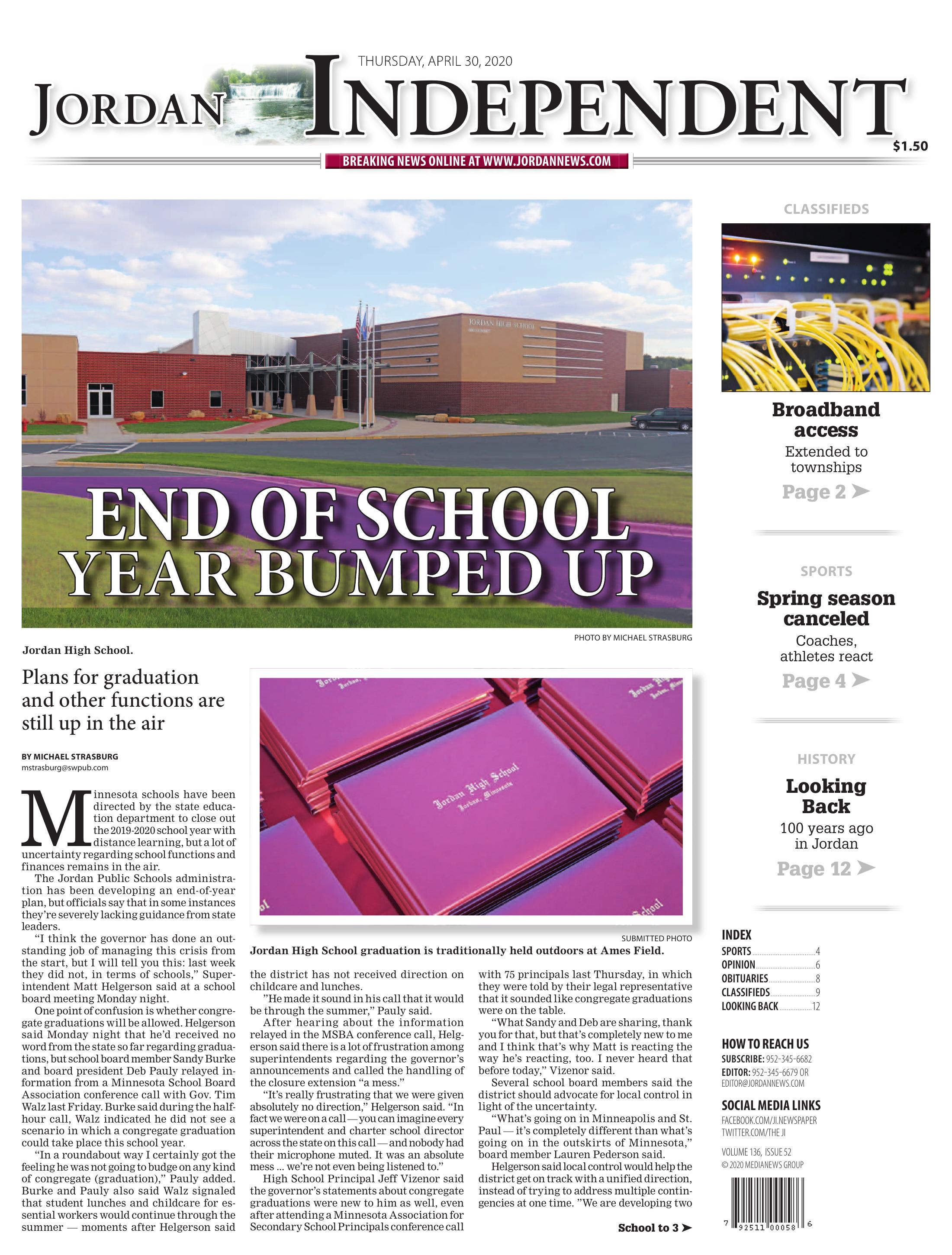