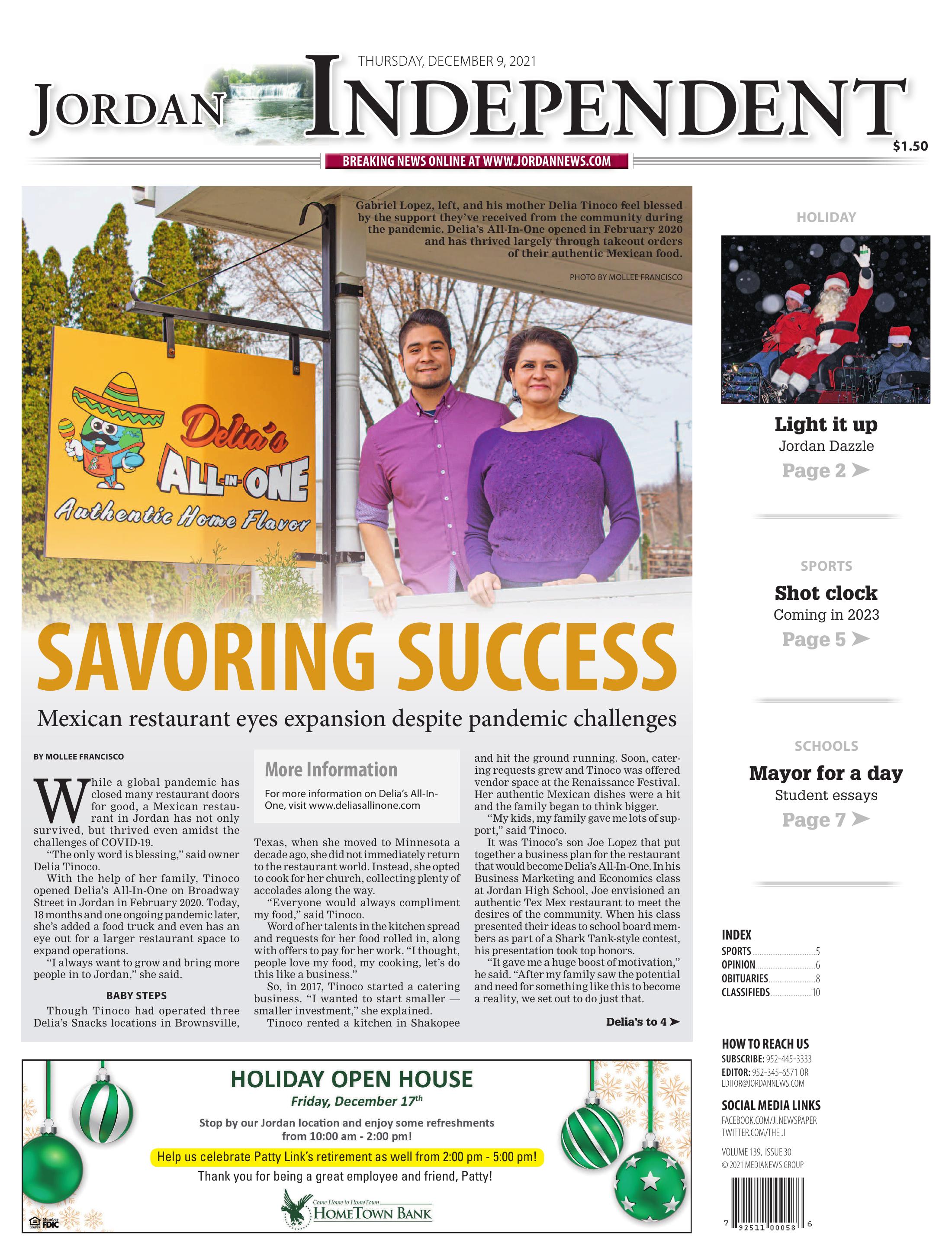 Gabriel Lopez, left, and his mother Delia Tinoco feel blessed by the support they’ve received from the community during the pandemic. Delia’s All-In-One opened in February 2020 and has thrived largely through takeout orders of their authentic Mexican food.

Delia’s All-In-One on Broadway Street in Jordan in February 2020. Pictured are Gabriel Lopez, left, and his mother Delia Tinoco.

While a global pandemic has closed many restaurant doors for good, a Mexican restaurant in Jordan has not only survived, but thrived even amidst the challenges of COVID-19.

“The only word is blessing,” said owner Delia Tinoco.

With the help of her family, Tinoco opened Delia’s All-In-One on Broadway Street in Jordan in February 2020. Today, 18 months and one ongoing pandemic later, she’s added a food truck and even has an eye out for a larger restaurant space to expand operations.

“I always want to grow and bring more people in to Jordan,” she said.

Though Tinoco had operated three Delia’s Snacks locations in Brownsville, Texas, when she moved to Minnesota a decade ago, she did not immediately return to the restaurant world. Instead, she opted to cook for her church, collecting plenty of accolades along the way.

“Everyone would always compliment my food,” said Tinoco.

Word of her talents in the kitchen spread and requests for her food rolled in, along with offers to pay for her work. “I thought, people love my food, my cooking, let’s do this like a business.”

So, in 2017, Tinoco started a catering business. “I wanted to start smaller — smaller investment,” she explained.

Tinoco rented a kitchen in Shakopee and hit the ground running. Soon, catering requests grew and Tinoco was offered vendor space at the Renaissance Festival. Her authentic Mexican dishes were a hit and the family began to think bigger.

“My kids, my family gave me lots of support,” said Tinoco.

It was Tinoco’s son Joe Lopez that put together a business plan for the restaurant that would become Delia’s All-In-One. In his Business Marketing and Economics class at Jordan High School, Joe envisioned an authentic Tex Mex restaurant to meet the desires of the community. When his class presented their ideas to school board members as part of a Shark Tank-style contest, his presentation took top honors.

“It gave me a huge boost of motivation,” he said. “After my family saw the potential and need for something like this to become a reality, we set out to do just that.

“This just made it all that much easier to motivate us as a family to try to make this restaurant possible,” said Joe.

The opportunity for a restaurant came in 2019 when a house that had been converted to a commercial space opened up at 401 Broadway. The family spent a labor-intensive year renovating the space to include a small dining area and a commercial kitchen before opening on Valentine’s Day 2020.

Tinoco’s other son and restaurant manager Gabriel Lopez recalled a “pretty chaotic” first day. “By dinner, it felt like all of Jordan wanted our food,” he said.

After they closed their doors that first day, the family immediately started evaluating what worked and what they needed to improve upon — a practice they regularly incorporate into their schedules to this day. “The community has given us really good feedback,” said Gabriel.

“They made our family feel like we chose the right community.”

Less than a week after opening, demand for their food was such that Tinoco’s family members — including her husband and her three children — were all on board to pitch in at the restaurant.

“By Sunday, I was quitting my full-time job,” recalled Gabriel. “I haven’t had another job since.”

“It’s good to know we can count on family,” said Tinoco.

Just a month after opening, COVID forced Delia’s to close. “There were so many unknowns,” recalled Gabriel. But as soon as they could safely reopen, Delia’s was feeding the community in Jordan once again.

“Coincidentally, we were ready,” said Gabriel, who had insisted that they offer the ability to order online when they initially opened. “We understood the convenience of online.”

With a limited number of tables to eat at anyway, what Delia’s lost in dine-in revenue, they more than made up for in take-out orders. Gabriel installed a shelving unit for takeout orders to facilitate contactless pickup and made a video explaining their “safe takeout” system. The community responded in kind.

Gabriel said even with the restaurant open to dine-in now, 80% of their orders remain online and they are busier than before the pandemic — so much so that they are looking for more space.

“The goal is always to be growing,” said Gabriel. “We want to open a larger restaurant.”

“I want to stay in Jordan,” offered Tinoco. “I want to grow with Jordan.

So, while Tinoco continues to offer up her famous street tacos and burrito bowls, she dreams of adding more of her authentic Mexican specialties to the menu.

And Gabriel (along with the rest of Tinoco’s family) will be right there, ready to help introduce the new flavors to the community.

“I have a lot of respect for my mom,” said Gabriel. “I admire her.”

“I know we can do it together,” she continued. “We are a team. A well-oiled machine.

“I feel very happy,” Tinoco added. “Everything is a blessing.”

“I always want to grow and bring more people in to Jordan." 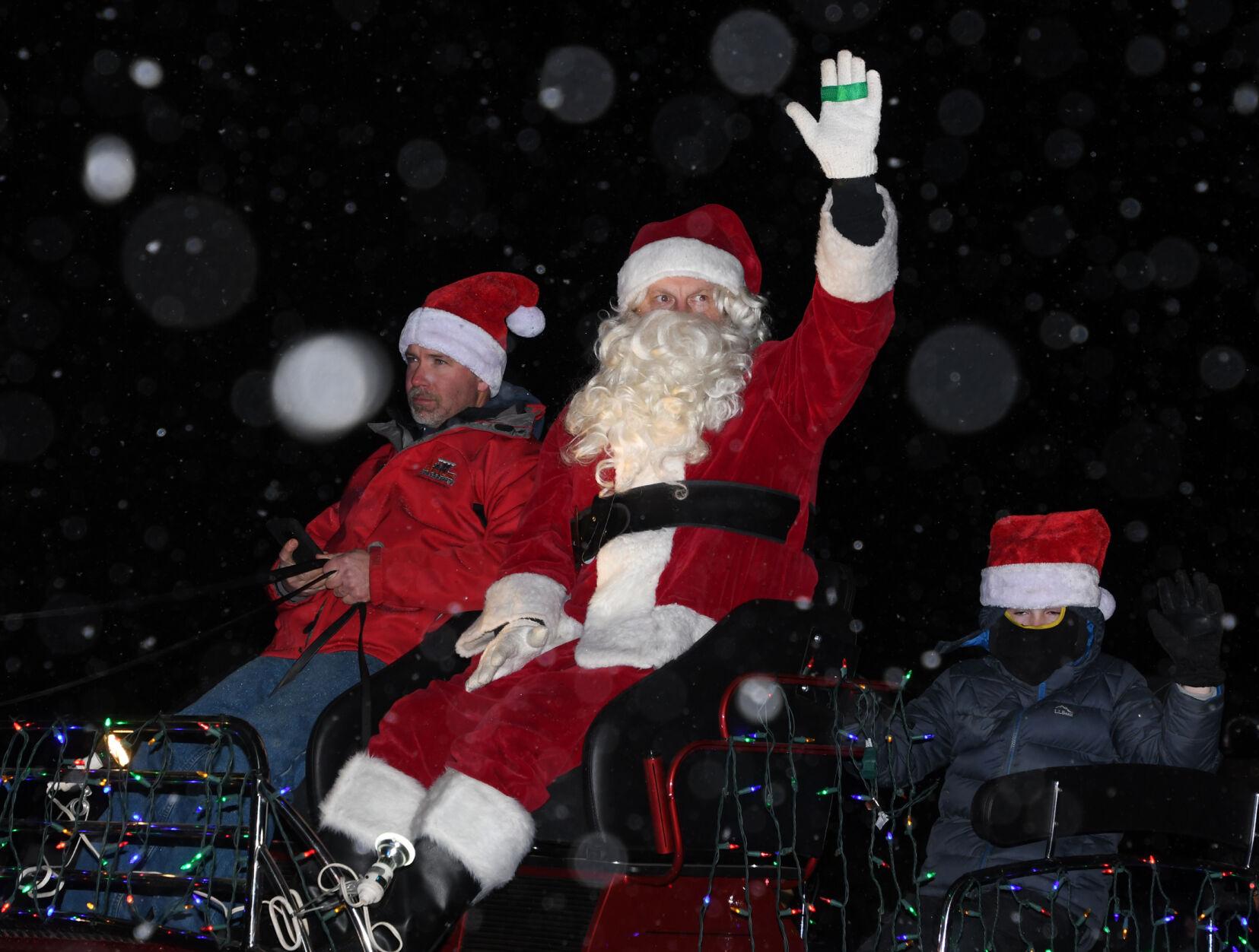 Santa Claus waves to the crowd near the end of the Jordan Dazzle Parade, as snow begins to fall.