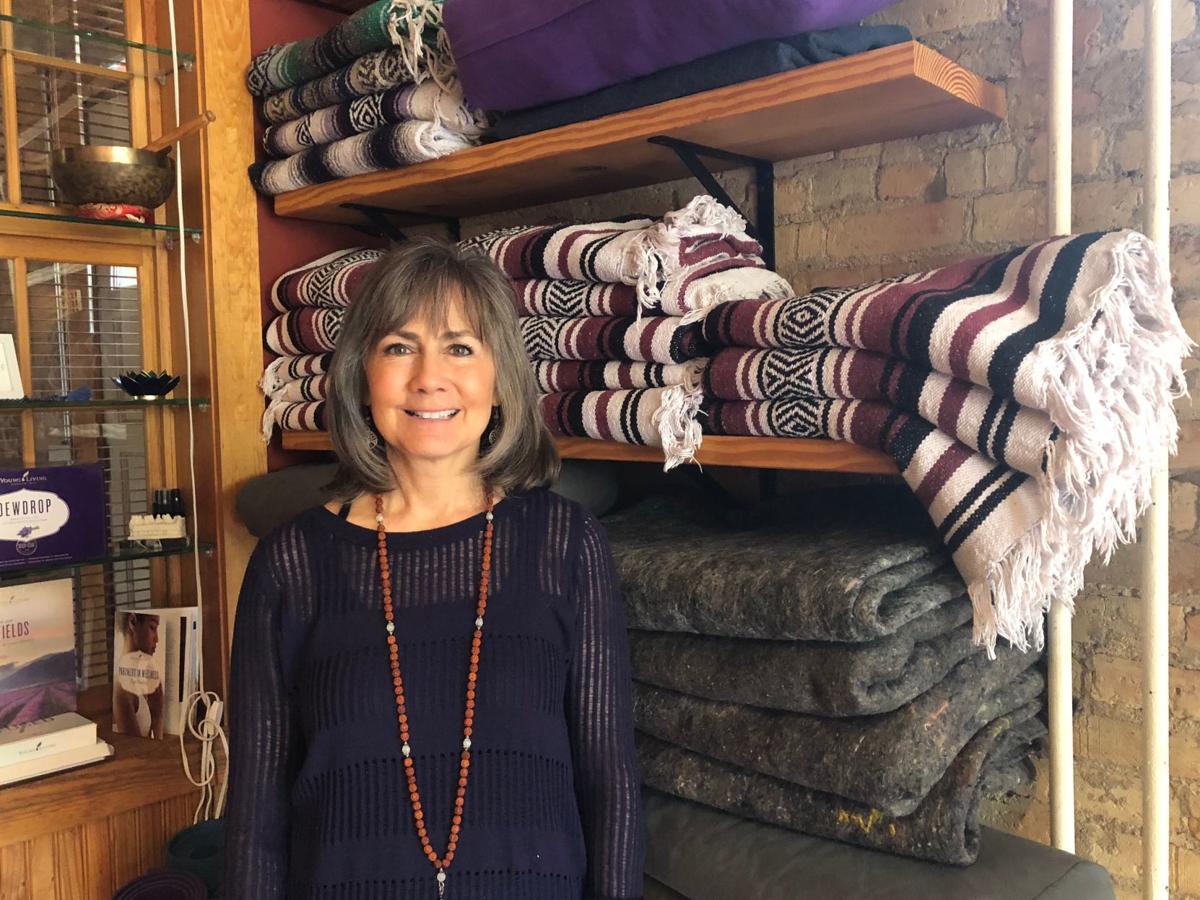 Pati Richards didn’t like yoga years ago — but now has her own yoga studio. 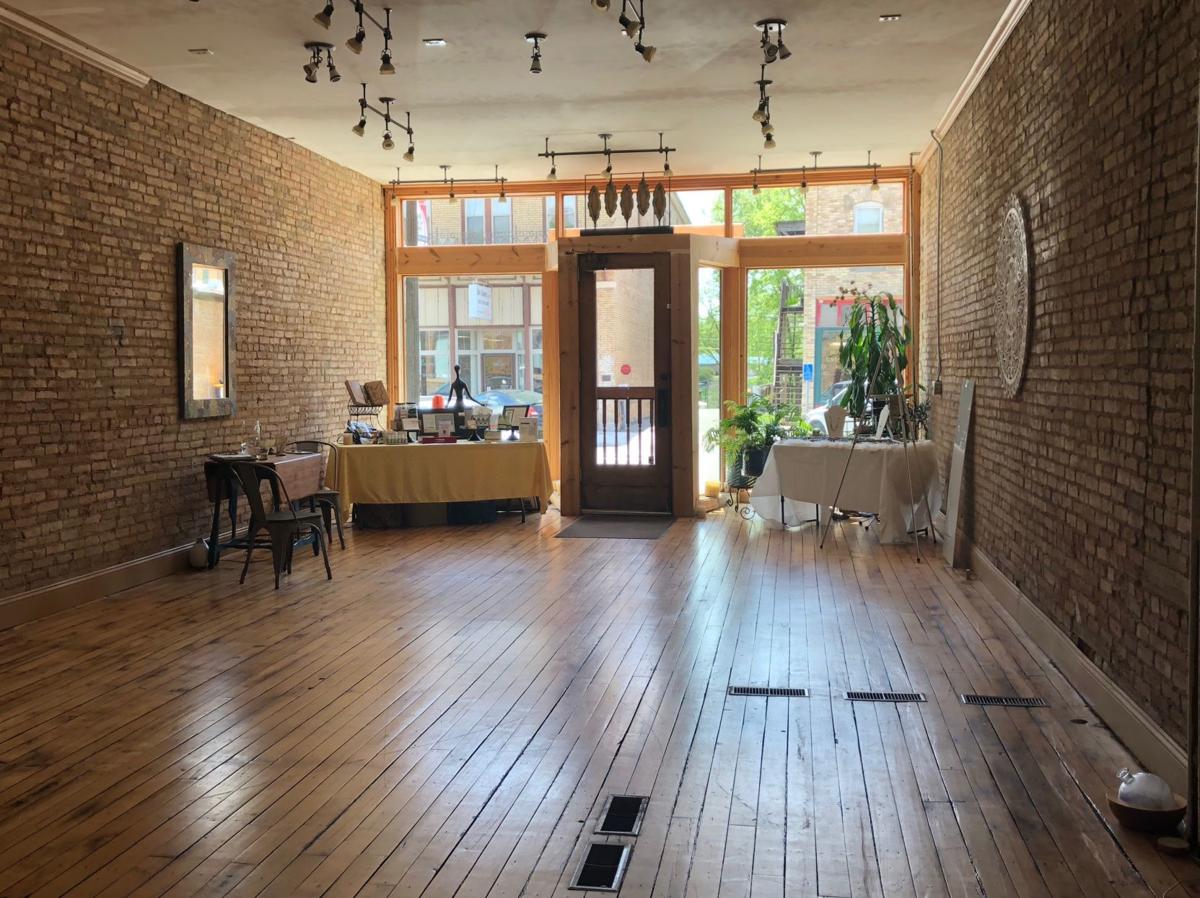 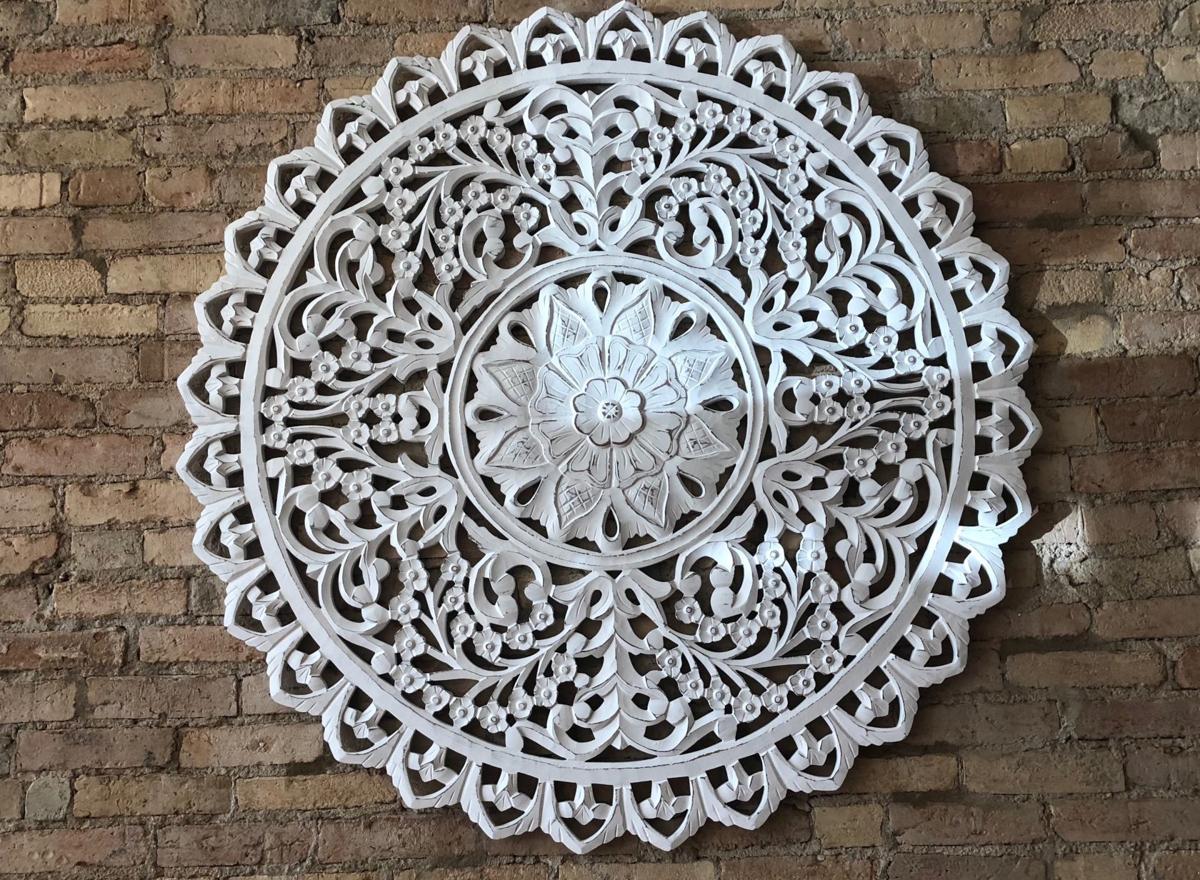 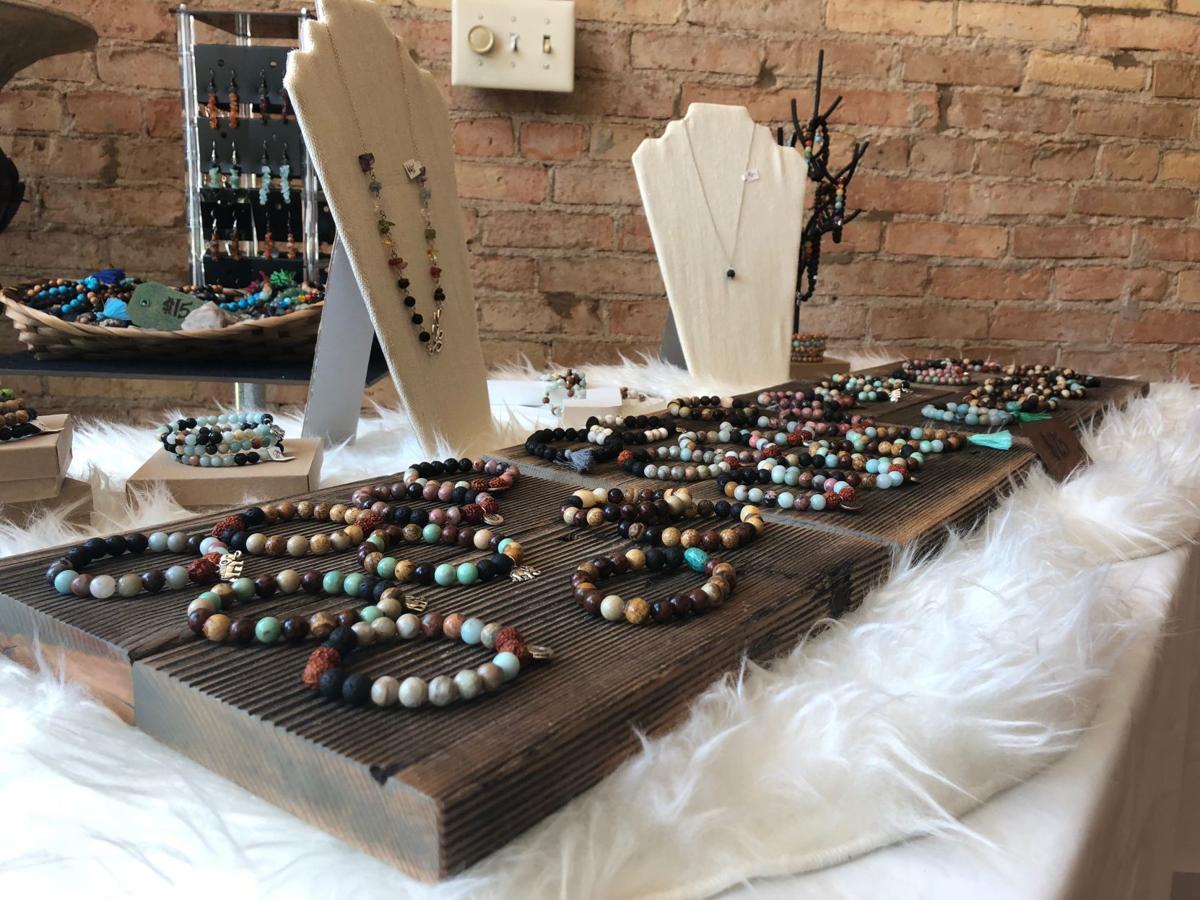 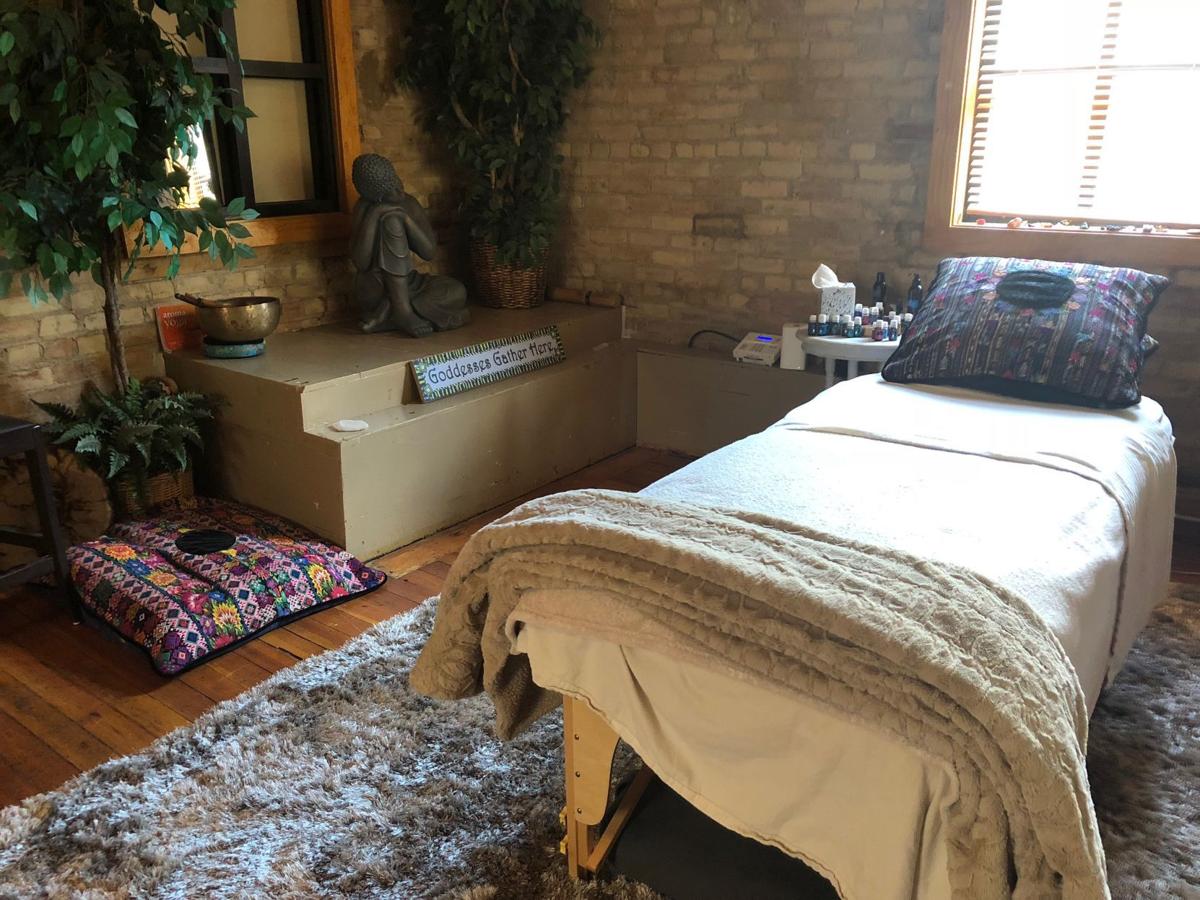 Store owner Pati Richards has private rooms in the back for massages. 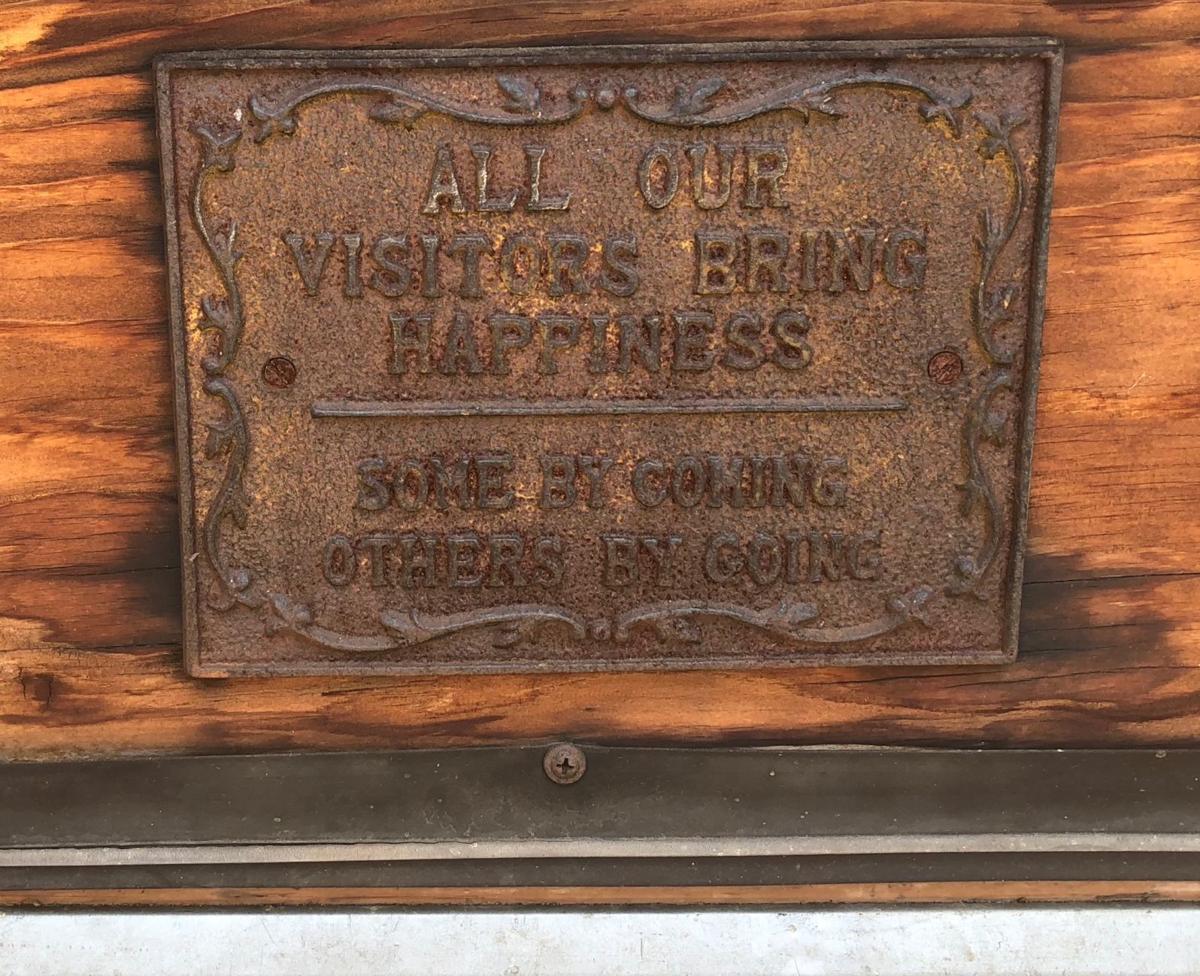 This door plaque came with the building at Sacred Waters. 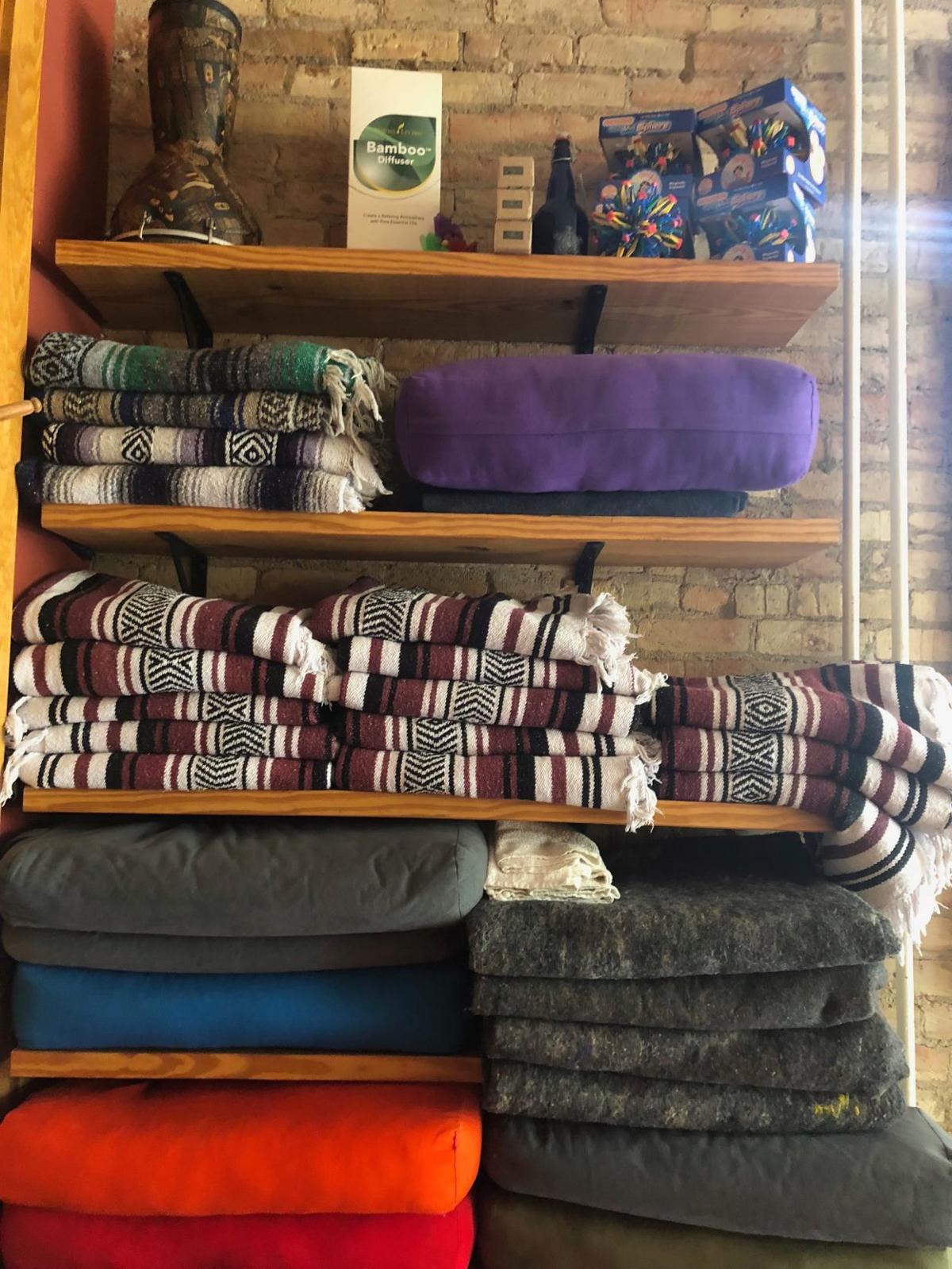 Mats line the shelves at Sacred Waters in Jordan.

Pati Richards didn’t like yoga years ago — but now has her own yoga studio.

Store owner Pati Richards has private rooms in the back for massages.

This door plaque came with the building at Sacred Waters.

Mats line the shelves at Sacred Waters in Jordan.

Pati Richards sat with her legs slightly crossed on her chair in a mostly empty room at her yoga studio, Sacred Waters, at 225 Water Street.

Less than a year ago, she put her townhouse in Victoria up for sale and moved into a friend’s second home — all before even buying the former consignment shop in downtown Jordan. Ten years ago, she didn’t even like yoga.

“We did it all without the reality of knowing if we could even buy this building,” Richards said as she fiddled with her aromatherapy necklace.

The wood door has a plaque nailed to the bottom under the glass reading: All our visitors brings happiness, some by coming, others by going.

That seems to be a testament to how Richards got to where she is now.

Inside, it’s spacious with exposed brick walls, wood floors and private massage rooms in the back. The studio has an apartment upstairs where she and her husband, Don, now live. It has a built-in breakfast nook and lots of dark wood with the hum of a mini waterfall in the background.

Richards was an avid marathon runner and was methodical with her training — running six days a week and taking one day off. She read magazine articles that said yoga would improve her running, and decided to give it a go.

Richards grew up an only child in a small 4,000-person town about 40 minutes northwest of Indianapolis. She went to study church education at Baptist Bible College in Springfield, Missouri, and went to a church camp over the summer in Ohio, where she met her future husband.

After getting married and graduating from college, they moved to Anchorage, Alaska which they called home for 14 years. Don Richards was a pastor there and she taught Bible studies and ran a bookstore.

Her husband then got a job at Westwood Community Church in Chanhassen and they and their two daughters, now 31 and 33, moved back to the Midwest.

Richards got her parent education license at Crown College in St. Bonifacius and worked at various schools throughout the metro and landed at the Shakopee School District as a parent educator and track coach. She started a program for parents and children learning English, parenting and various life skills.

There she found Yoga Calm, a class offered at the school, and eventually became an instructor. The class helped children with stress and anxiety lower blood pressure and ease tension.

As a parent educator, she felt it was something her families needed.

“At first it was just that physical aspect and I hated it and then I saw the big picture and I got into it in different ways,” she said.

And thus her journey into yoga began. Richards took a leave of absence from Shakopee to pursue yoga and got a grant from Allina Health to teach yoga in the metro area.

Those plans changed when her mother became terminally ill, and Richards went to Indiana to take care of her. After she died, Richards decided to formally resign from the Shakopee School District.

Richards then went on an Ashram — a religious retreat — in the Bahamas for three months. It was a rigid schedule. Richards slept in a tent and had to be up meditating at 6 a.m. and was required to read and practice yoga daily.

There on the island, Richards said she felt a calling to open up a yoga studio — so she did.

When she got home and was scrolling on Facebook, the building at 225 Water Street appeared on her feed. It was love at first sight and she asked her husband to check it out with her.

“We looked at it and we both seriously fell in love with the building,” she said.

Without hesitation, she and Don put their house up for sale in October 2017 and moved out within a month. They put in an offer in January for the building, but someone had also put in an offer.

During an agonizing wait, Richards went to Nepal to build houses destroyed in the 2015 earthquake.

“Our house sold, we don’t know if we’re going to get this place in Jordan, but I’m going to build houses in Nepal,” she said. “I felt that God, the universe, however you view the divine, but it’s like you’ve got a great sense of humor don’t ya.”

Thankfully the other bidder rescinded their offer and they moved in March 1.

Her husband doesn’t do yoga but is very supportive of Richards. He waters plants in the studio, fixes fixtures and helped her install lighting as she prepared for her soft opening.

“There is no possible way I could have done this without him,” she said.

Mental wellness: It’s not all about the poses

For Richards, yoga is a lifestyle.

Along with poses, Richards also teaches breathing and calming exercises.

“It’s great to have yoga on the mat, but what good is yoga truly if you don’t take it off the mat?” she said.

Every Monday night, Richards works at the Shakopee Correctional Facility teaching yoga to about 20 inmates for two hours in 12-week sessions. She recalls one woman who came in the first week with “her armor up” and Richards feared she wouldn’t get it. Three weeks into the session, the woman came up to Richards and told her about an incident in the cafeteria where another inmate accidentally spilled her food all over her.

“She said she stood up and was ready to punch her out, and she said she remembered her breath and she took a breath and paused and gave the opportunity to the person who made the mistake to say, ‘Oh my gosh I’m so sorry,’” Richards said.

Before getting into yoga, her daughter had an anxiety attack. She was frozen in their bathroom and Richards couldn’t get her to stand up because she was stiff.

Richards was scared and unsure what to do, so she called 911. The paramedic had her daughter breathe through a paper bag.

“I was kind of like, are you kidding me, really?” she said. “I’m calling you guys and you’re having her breathe into a bag.”

The paramedic asked if she wanted to go on any medication, noting it wouldn’t kick in for at least an hour and recommending she didn’t.

At that point, Richards realized breathing could be an effective way to calm down from a stressful situation, which is what she hopes to do for future clients.

“My purpose is to help people connect with their bodies because a lot of times that’s helping them tell the story of what’s going on,” she said.

Richards has traveled the world studying yoga and seven years ago went with the Himalayan Institute to the Kumbh Mela in India, a religious pilgrimage which draws over 60 million people every 12 years along the Ganges River.

Afterward, she said the group went to a jungle to meditate and learn.

“I’ve been a teacher for many, many years and I will always be a student because I learn so much from all these cultures.”

Though she grew up believing in God, through yoga she realized all beliefs could bring unity.

“Sure we’re all diverse, but I see the beauty of the unity of the connection of all these faiths,” she said. “I hope that one of my purposes on Earth is to bring unity because that’s what I see.”

Richards hopes to bring her experience to future clients at Sacred Waters.

Richards plans to continue adding yoga classes and has even considered combining kombucha beer and yoga — where people would do yoga and then go into happy hour.

“I’ve had a lot of rich experiences now to pull from to hopefully enrich my life and enrich everybody lives’ I come in contact with,” she said.

Classes will start June 19 and cost $15 for drop-ins and $70 for a six-class pass. Otherwise appointments can be made.