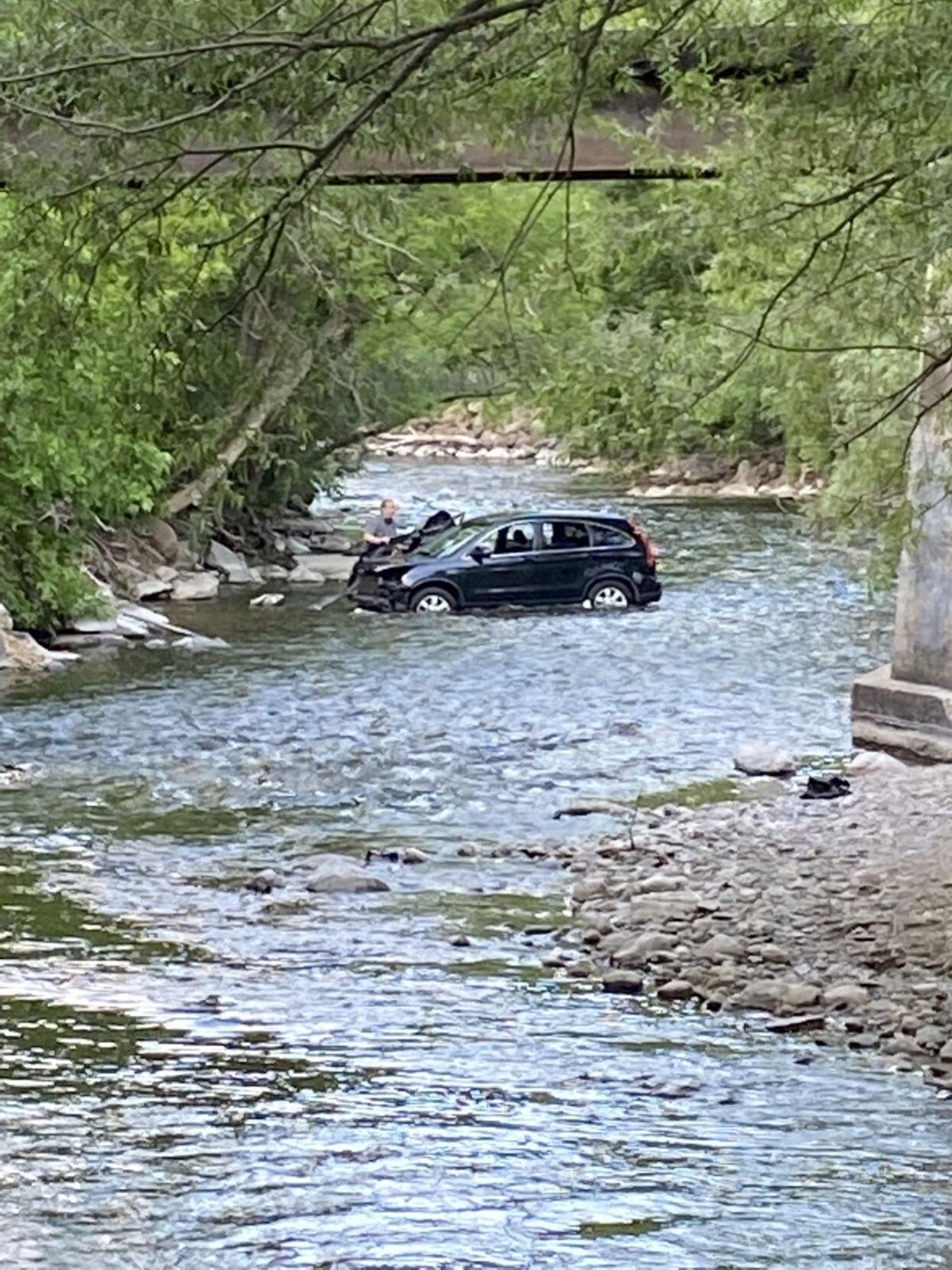 The crash as photographed the evening of June 2. 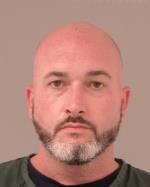 A 38-year-old Montgomery man was charged in Scott County District Court last week with assault and making terroristic threats after a crashed vehicle was found in Sand Creek. The man behind the wheel was allegedly found naked by police officers, who used a Taser on him, according to court documents.

Jared Scott Herman was charged June 3 with second-degree assault with a dangerous weapon and making terroristic threats, both felonies.

A woman who was with him told police she made several attempts to stop Herman from crashing into objects and other vehicles, eventually grabbing the wheel to prevent the vehicle from hitting a tree. The vehicle landed in Sand Creek.

According to the complaint:

Police were dispatched at 6:11 p.m. June 2 to a home in the 500 block of Broadway Street in Jordan, where a vehicle had reportedly crashed into Sand Creek.

When authorities arrived on the scene they found an adult woman who appeared very distraught and was not wearing any clothing.

The woman told officers a male suspect, Herman, had taken her hostage and made her crash her vehicle.

The vehicle, a black Honda HR-V, was in the middle of Sand Creek. A bystander advised officers that Herman was also in the creek, just east of the public works garage.

Police were then able to locate Herman, who was yelling, making Biblical references and referring to himself as Moses.

Herman allegedly asked officers, “Who am I?” and police gave him loud verbal commands to lay on the ground. Herman raised his arms and yelled, “just shoot me now.” Herman then yelled and advanced toward officers aggressively, the complaint said.

An officer aimed his Taser at Herman’s shoulder and discharged it. Herman flinched but continued advancing toward the officer. The officer discharged a second cartridge at Herman, who then fell to the ground on his back. Police gave Herman loud verbal commands to roll on his stomach, but he allegedly refused and repeated “roll over” back to the officers. He was put in handcuffs once more officers arrived.

Police placed Herman on a stretcher and put him in an ambulance. Officers assisted paramedics in removing the handcuffs. When the handcuffs were removed, Herman allegedly became agitated and started screaming to be released. He grabbed one officer’s hand by the fingers and began to squeeze very tightly. The officer was able to break his grip and secure him in the ambulance, where he was transported to St. Francis Regional Medical Center in Shakopee.

There, officers received a warrant to take a blood sample from Herman for later analysis. Herman was discharged from St. Francis and taken to Scott County Jail.

Meanwhile, the woman was transported to Mayo Clinic Health System in New Prague. She shared with officers she had been staying with Herman for a week, and over that short period of time, had seen his well-being decline, the complaint said.

The woman reported he had barely slept or eaten, and had allegedly burned his phone in a fire pit at his home and had broken the woman’s cell phone in the days leading up to the incident.

The woman told investigators she remembers seeing him allegedly use marijuana and drink some alcoholic beverages.

On Tuesday, June 1, Herman allegedly demanded the woman give him her keys so he could drive her vehicle, according to the complaint. The victim complied, under the impression they were going to walk Herman’s dog around some water. Instead, the woman became increasingly worried throughout the drive as Herman’s behavior became increasingly erratic. During the drive, the woman attempted to subtly get the attention of a Montgomery Police Officer when the defendant pulled alongside to speak with the officer.

During the drive, Herman allegedly made comments about wanting to be her husband and that they were “going to see Jesus” together, though the victim said they were just friends and claimed she hardly knew him. Herman allegedly started damaging the inside of the vehicle, including pulling off the rearview mirror and wires and tossing them out the window.

Herman began taking his hands off the wheel and told the woman he engaged in this behavior before and he had crashed his vehicle two other times. The woman said Herman began talking about Jesus and veered into oncoming traffic as they entered the city of Jordan. The woman said she grabbed the wheel and steered away, narrowly avoiding several crashes. When she did so, the woman said Herman allegedly asked her, “What are you doing? God’s got us! Do you not have faith?”

According to the complaint, Herman allegedly attempted to crash into a tree behind a residence near Sand Creek, but the woman grabbed the wheel and consequently they crashed over a drop-off and into the creek.

In the creek, Herman allegedly took all of his clothes off and demanded the victim do the same so that they could “get baptized in the Jordan river.”

The woman said she feared Herman was going to harm her, so she complied. Eventually she was able to walk away from the scene and officers arrived. The victim said she repeatedly asked Herman to stop and was afraid for her life, according to the report.

Additional charges may be filed after further investigation and once lab results are received, Jordan Police Chief Brett Empey said.