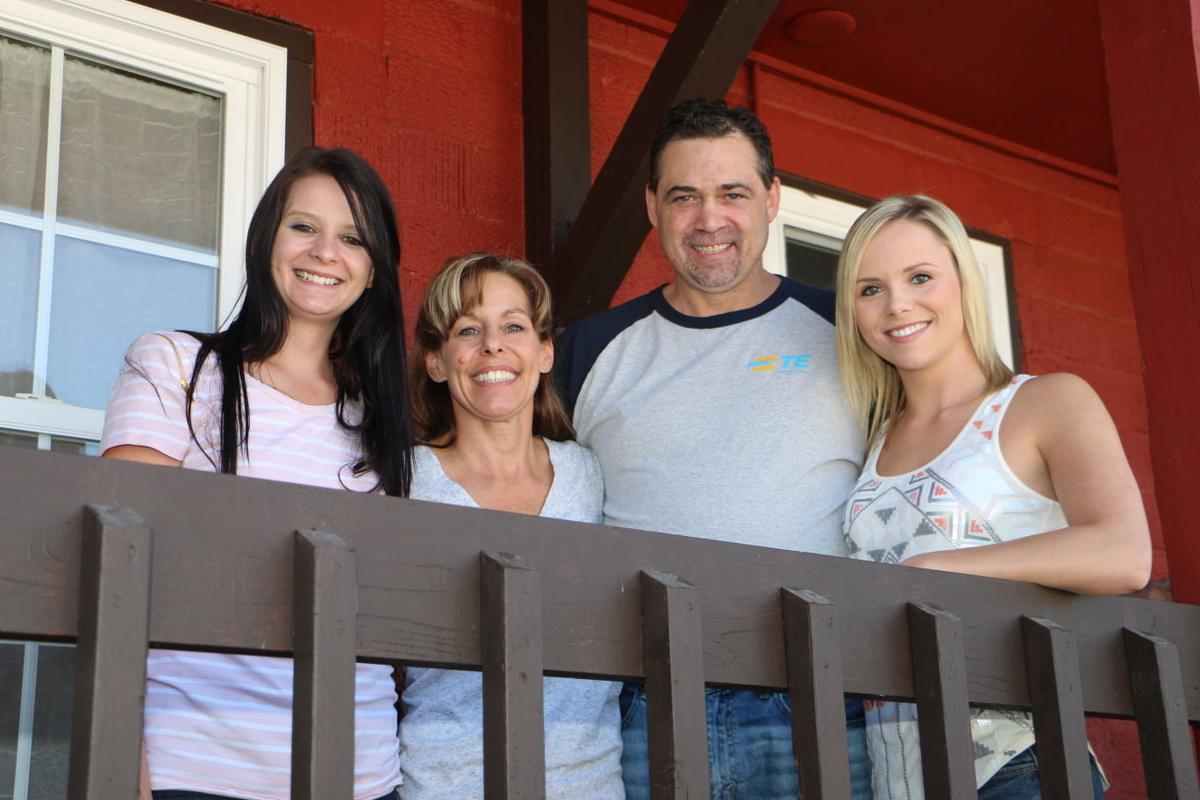 The Feed Mill restaurant in downtown Jordan re-opens on Thursday, Oct. 1 to serve up homemade, scratch breakfast, lunch and supper entrees. The McCarthy family will all work together to run the ma and pa, diner-style restaurant. Head cook and manager Jeff McCarthy stands outside the restaurant with his daughter Samantha (left), wife Sue and their daughter Hannah. 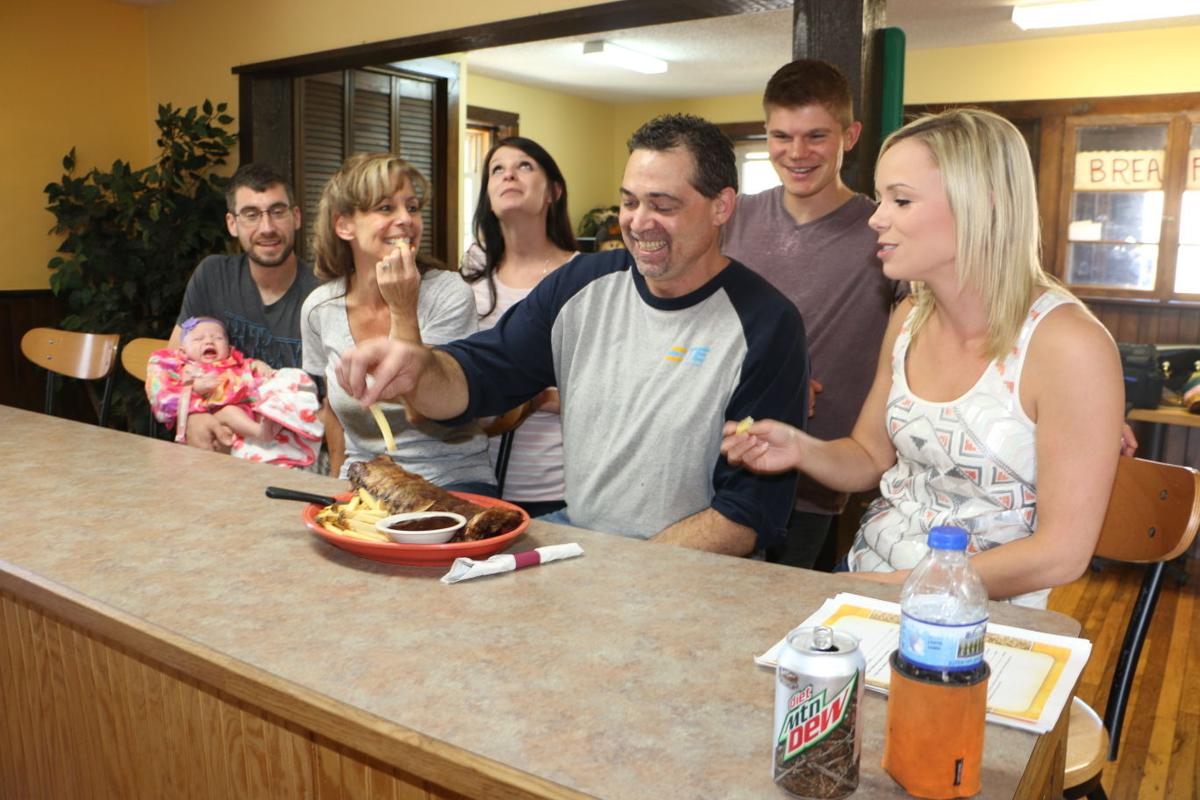 The McCarthy family enjoys some social time and barbeque ribs with homemade, fresh-cut French fries while seated at the new bar. The bar seating will offer a place to have coffee, a meal or watch news and sports in front of a big screen television. 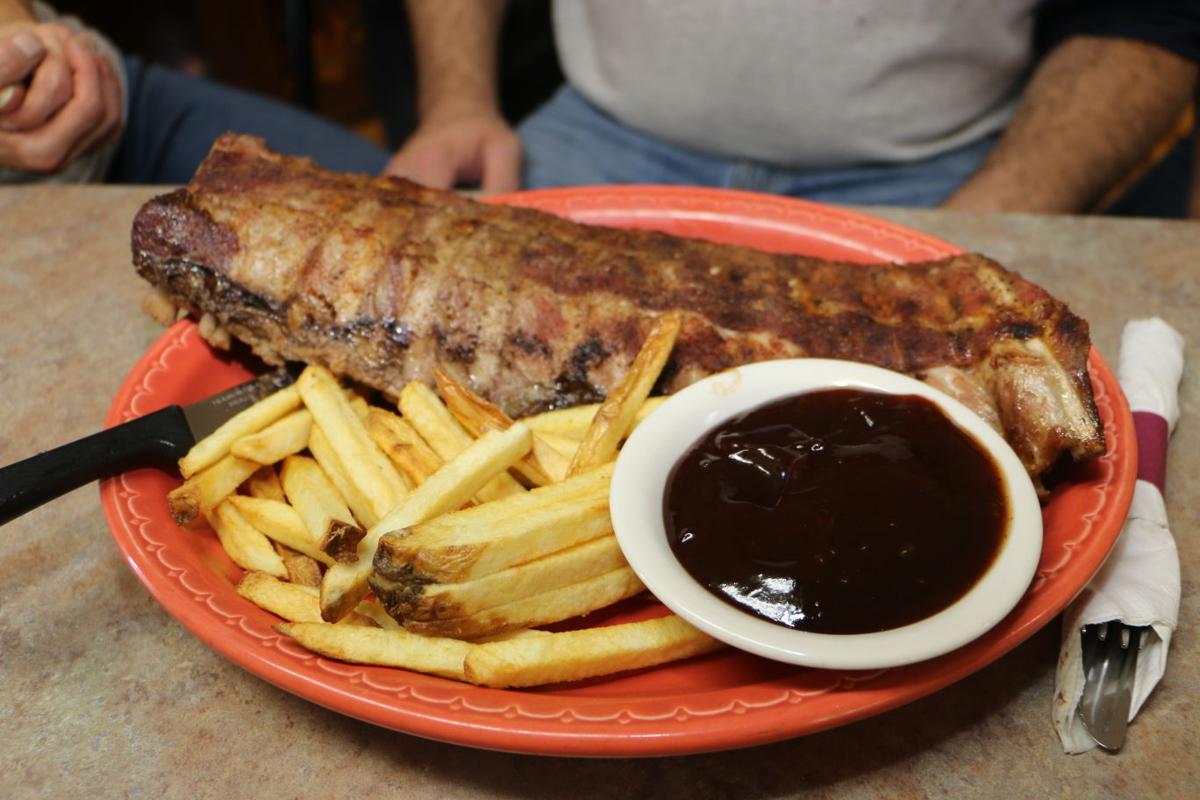 Homemade barbeque sauce to dip the rack of ribs and fresh cut French fries are an example of a dinner entree on the menu at the Feed Mill. Other supper entrees include chicken, steaks and pasta dinners.

The Feed Mill restaurant in downtown Jordan re-opens on Thursday, Oct. 1 to serve up homemade, scratch breakfast, lunch and supper entrees. The McCarthy family will all work together to run the ma and pa, diner-style restaurant. Head cook and manager Jeff McCarthy stands outside the restaurant with his daughter Samantha (left), wife Sue and their daughter Hannah.

The McCarthy family enjoys some social time and barbeque ribs with homemade, fresh-cut French fries while seated at the new bar. The bar seating will offer a place to have coffee, a meal or watch news and sports in front of a big screen television.

Homemade barbeque sauce to dip the rack of ribs and fresh cut French fries are an example of a dinner entree on the menu at the Feed Mill. Other supper entrees include chicken, steaks and pasta dinners.

Homemade breakfast, lunch and dinner will be served up this week at the Feed Mill restaurant in downtown Jordan.

The diner style restaurant will re-open Oct. 1, ready to welcome all past, loyal customers and hungry new ones looking for a home-cooked meal.

Jeff McCarthy is the manager and head cook at the Feed Mill, and his wife Sue will help out with cooking and the restaurant in the evenings and weekends. The couple makes a home in Jordan.

“I know the diner business well – I was the last person to own the hamburger restaurant that closed in 2000 behind the police station,” McCarthy said.

For the last 15 years, McCarthy has worked as the head cook and manager at the popular 65-seat diner Wampach’s in Shakopee, where he commented how business is booming.

The love for diner cooking and hospitality runs in his family’s genes. His brother Shaun helps to run a family-owned diner style restaurant in Maple Grove. “He is like me, he likes to do breakfast so I assisted him getting his breakfast menu going,” McCarthy said.

Besides support from his wife Sue, McCarthy looks forward to working alongside his two grown daughters, Samantha, 24, and Hannah, 22, who worked with her father for seven years in the kitchen and in the front part of the restaurant.

Since his children are raised, McCarthy looks forward to getting to know the community and all veteran customers and new customers who will walk into the restaurant in weeks to come.

“I like the small town atmosphere and the home cooking,” McCarthy said.

The breakfast, lunch and dinner menu will be traditional and offer a variety for many seeking a home-cooked meal served up with hometown friendliness on the side.

“I have been cookin’ since I was a kid – me and my brother [were] cooking in the kitchen at home since I was 7 years old,” McCarthy said. His mother was an early teacher who taught him his basic culinary skills.

“After that, I was self taught and have worked in many different types of restaurants,” he said. Besides working at Jordan Transformer and Shakopee Valley Printing, McCarthy’s career has always led him back to the kitchen to work in his favorite venue – a diner that serves up homemade scratch entrees for breakfast, lunch and dinner.

McCarthy is excited to open the doors this Thursday and he is eager to get to know the community and serve up home-cooked food. Many from the downtown area and locals have been already coming in to welcome him and ask when the restaurant will begin serving food.

McCarthy said he visited a few commercial buildings and restaurants up for sale in Jordan and the area.

“I didn’t want to drive to work — I wanted to be five minutes away,” McCarthy said.

For a while McCarthy will lease the building from the current property owners, who made significant interior and exterior upgrades to the restaurant.

“They redid the floors, did some exterior painting and changed out some windows that were fogged – the floors look really nice,” McCarthy said.

The couple invested in a new breakfast bar area with stools where they can enjoy a cup of coffee and watch the morning news or a weekend sports game on a large screen television. The couple also purchased a handsome golden oak desk for the entryway. Customers will be greeted at this desk and pay here at the end of the meal.

“I did the tables myself and sanded them and put polyurethane on them,” McCarthy said.

For now, the restaurant name will remain the same since it is a household name in Jordan and popular with the locals, he said.

“It might change to McCarthy’s Feed Mill in the future, but it has been the Feed Mill and it is located in an old feed mill, so let’s keep it that way,” McCarthy said.

The restaurant will again take phone takeout orders and the staff will be getting ready to offer food delivery within the city limits of Jordan.

“We hope to do some delivery to the seniors who cannot get out and who want a home-cooked meal.”

The diner menu will offer favorite breakfast and lunch entrees, including build-your-own omelets and sausage and gravy over biscuits.

McCarthy’s favorite breakfast menu item is the Cajun that is served up with hash browns, peppers and mushrooms with a hot Cajun spice and a creamy, rich hollandaise poured over the top.

All the expected lunch sandwiches will be served along with homemade soups and pies. “We will have lunch specials like meat loaf and spaghetti, tator tot hot dish and casseroles,” McCarthy said.

“My sister gave me three bags of apples from her apple trees and my wife and I plan to make the pies,” McCarthy said.

Happy to get the green light from the Department of Health last week so the Feed Mill could open its doors by Oct. 1, McCarthy said “I am so glad the landlords put some money into making it look nice in here.”

When asked what the trick is to running a successful small town diner, McCarthy offers a wide smile and said, “You have to smile a lot and you have to be nice and happy.”

The Feed Mill staff looks forward to opening its doors and plans on being busy moving forward with loyal, return customers and new guests who want to try out the new restaurant menu.

“We are just going to open and be happy we are opening,” said McCarthy.

Who: Jeff McCarthy, cook and manager

Contact the Feed Mill at 952-492-5188 for takeout orders and soon delivery within the Jordan city limits.