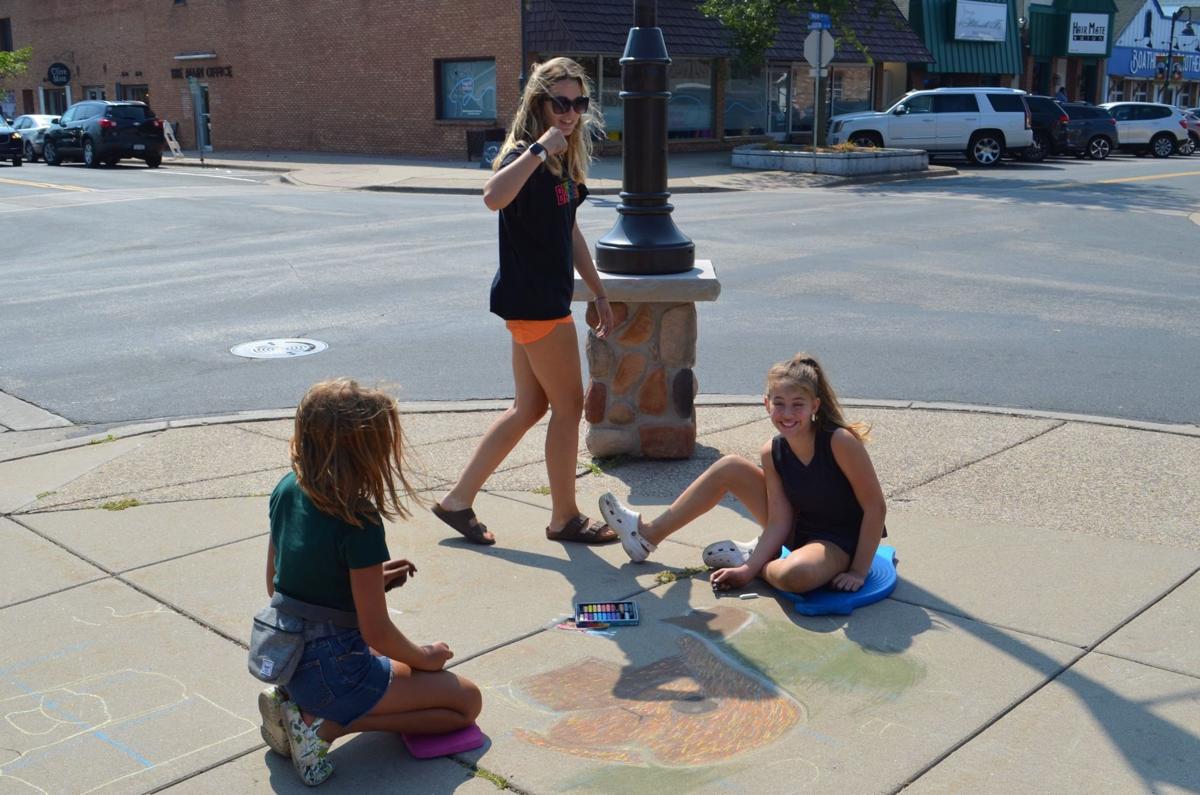 14-year-old chalk artist and teacher Allison Olstad, center, checks out the progress that Abby, left, and Campbell have made on their drawings at a Prior Lake summer camp. 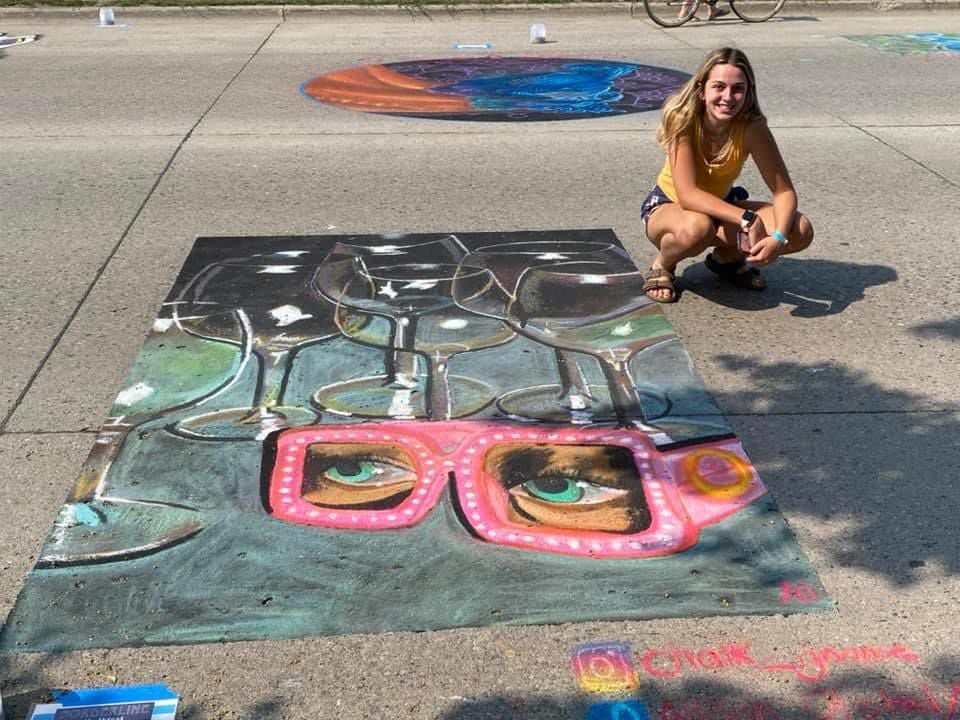 Allison Olstad poses with a completed artwork at Borderline Chalkfest in Wahpeton, North Dakota in July. She travels across the Midwest to create and compete in chalk art festivals. 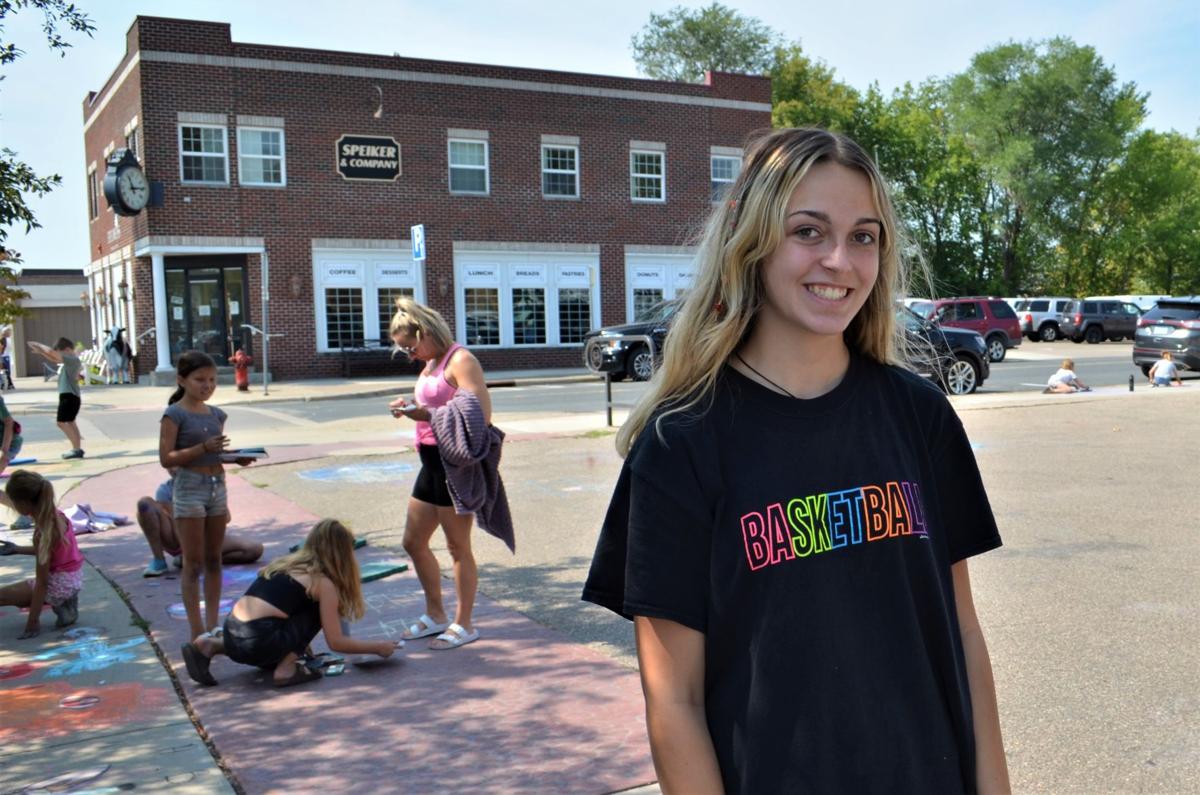 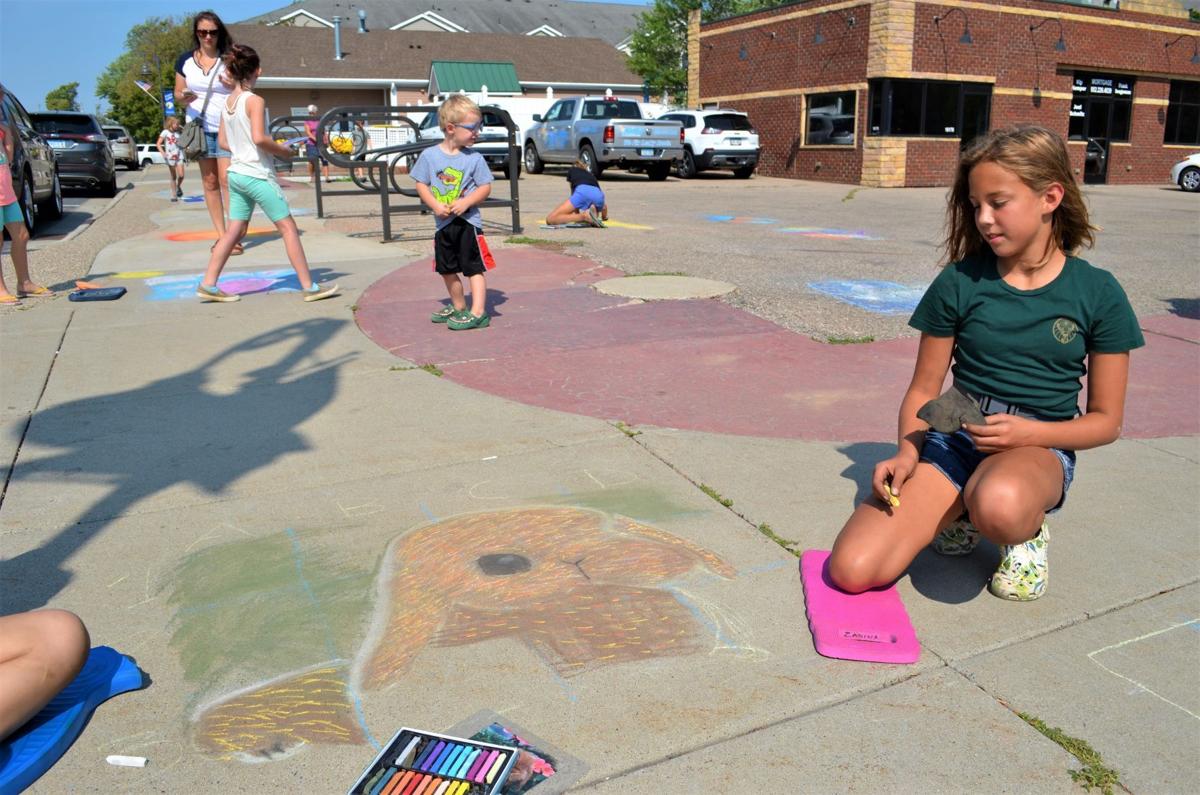 Campbell takes a step back to look at the chalk art drawing she created at a daylong chalk art camp led by Allison Olstad. 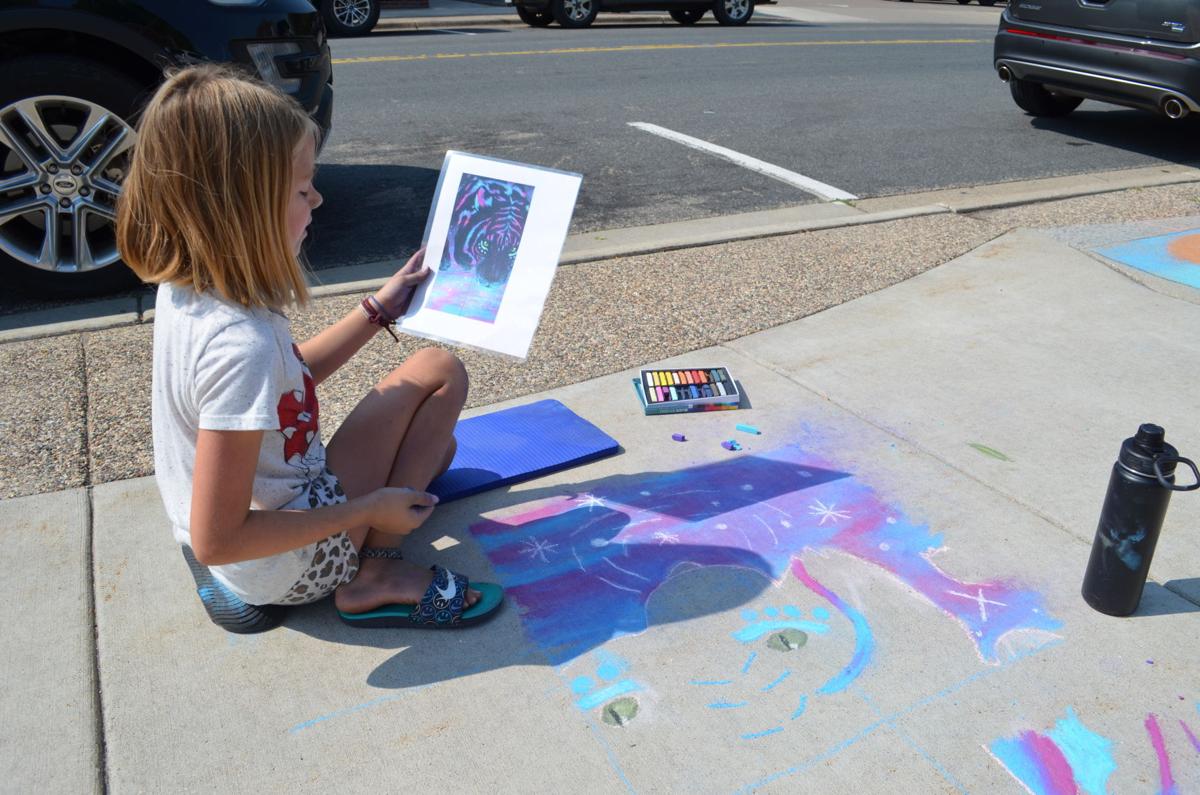 Hallie, 9, checks her reference photo as she draws a tiger at a daylong chalk art camp in Prior Lake.

14-year-old chalk artist and teacher Allison Olstad, center, checks out the progress that Abby, left, and Campbell have made on their drawings at a Prior Lake summer camp.

Allison Olstad poses with a completed artwork at Borderline Chalkfest in Wahpeton, North Dakota in July. She travels across the Midwest to create and compete in chalk art festivals.

Campbell takes a step back to look at the chalk art drawing she created at a daylong chalk art camp led by Allison Olstad.

Hallie, 9, checks her reference photo as she draws a tiger at a daylong chalk art camp in Prior Lake.

Though she's not even old enough for a driver's permit, Allison Olstad, of Jordan, has crossed state lines to compete in art festivals that draw competitors from across the United States and even internationally.

Unfortunately for fans, none of that artwork exists anymore: It was all washed away in the first rain after the chalk art festival.

Her first introduction to the ephemeral medium was at a summer camp with Minnesota muralist Sean McCann. She had worked with chalk art before, Allison said, but after the summer camp, her creativity "just took off."

"It's super relaxing for me and I can really express myself without talking about it," she explained.

At chalk festivals, though, talking to passersby is a core part of the experience.

When she first chalked with an audience at age 10, Allison answered the crowd's questions, but didn't know how to elaborate or draw the conversations out, she said. At the dozens of festivals she's attended since, she's learned how to answer questions "to have more of a conversation," she added.

The payoff is seeing strangers engage with each other and bond over their shared love of art, like at the first Arbor Lakes chalk festival she attended.

"You could tell they weren't together but you could hear them talking to each other," Allison recalled.

"It's been fun to watch her grow and change in her own art," said Stephanie Olstad, Allison's mother. "I definitely think it's helped her grow in communication and public speaking."

Allison's next event is the Arbor Lakes Chalkfest on Main Street in Maple Grove over Labor Day weekend. Her first step at any festival, be it in North Dakota or Ohio, is to "scope out the place," Allison explained, where "you see the potential that the weekend will hold."

The "chalk family" of artists, as the Olstads call the regular crowd of artists, range from 14 (Allison) at the youngest to artists in their 60s. The best part of any festival is talking to her fellow artists, Allison said, and she keeps in touch with many of them, even though they're scattered across the country.

Allison and Stephanie work with the various parks and recreation departments, where they offer classes to find time and space for the expansive art form.

Locations are generally easy to find − though Allison did once find herself and her campers kneeling on grass to sketch on a slim stretch of sidewalk − and weather is even more unpredictable. At the weeklong camp she taught in Jordan a few years ago, it rained three out of the five days of camp, Allison said.

She begins camp by sharing her own story of how she got into chalking, and she demonstrates some of the core techniques − gridding, blending − to get the kids started.

"It helps them see that they can do it before they get into the final piece, and it gives them that confidence," she explained. "I show them things and they take it from there."

Students come from all over Minnesota and occasionally cross state lines to attend the Olstads' class. Several kids have hailed from South Dakota and as far away as Montana, and a set of cousins from St. Cloud once told Allison they'd planned their visit to family in the Twin Cities in order to attend the camp, Allison said.

It's not just the draw from faraway cities that demonstrates chalk art's draw. Many of Allison's students are repeat visitors, including one girl who's attended nearly every camp, Allison said. The student's experience has given her the confidence to branch out artistically and try untested approaches to an artwork.

"She's not afraid to ask about things that would take her that extra step," Allison said, and "there's no way you can go wrong by getting into chalk."

Allison takes notes from the campers' innovations, too. She's seen some successes (and some frustration) come from students who tackle an artwork one grid-square at a time, rather than sketching the whole outline first.

One student started out the piece with highlights instead of base colors, a technique that Allison is intrigued by and intends to test out in her own work − though not in front of a crowd, she said.

At a Prior Lake chalk camp in mid-August − the last one of the summer − all the students were new to chalk art. As they crouched on knee pads and carefully blended a corner or laid down a final touch their grown-ups arrived and began perusing the collection of drawings.

Though the art wouldn't last long, it turned the corner of Main Ave and Dakota Street into a horizontal gallery of artwork.