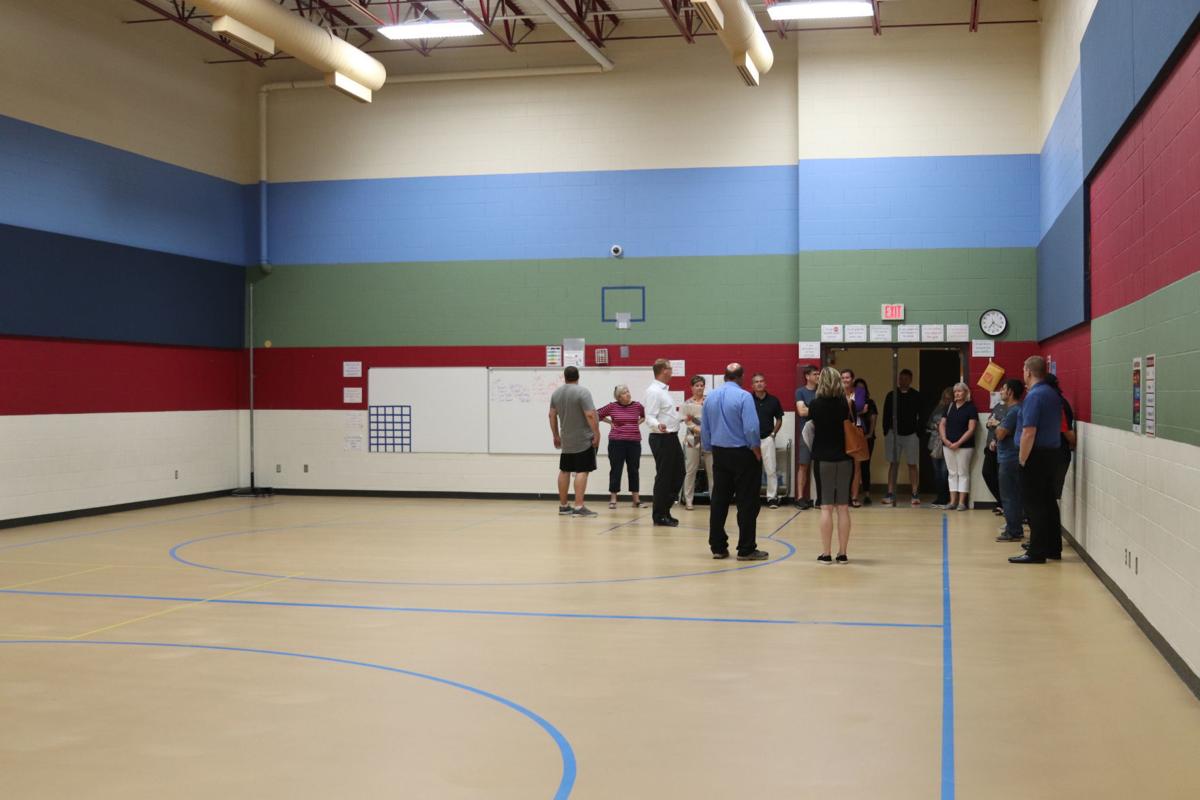 Members of the public tour the multipurpose room at Jordan Elementary School, where some students eat lunch due to cramped quarters in the cafeteria. 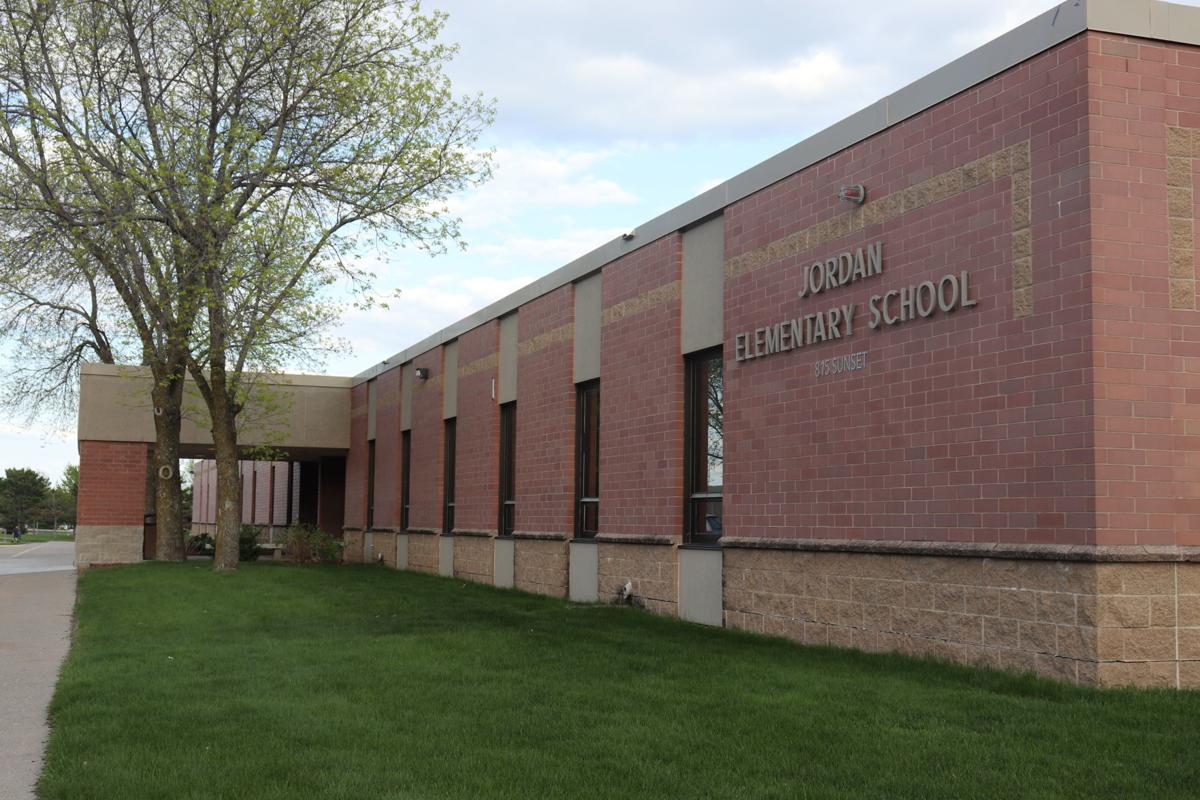 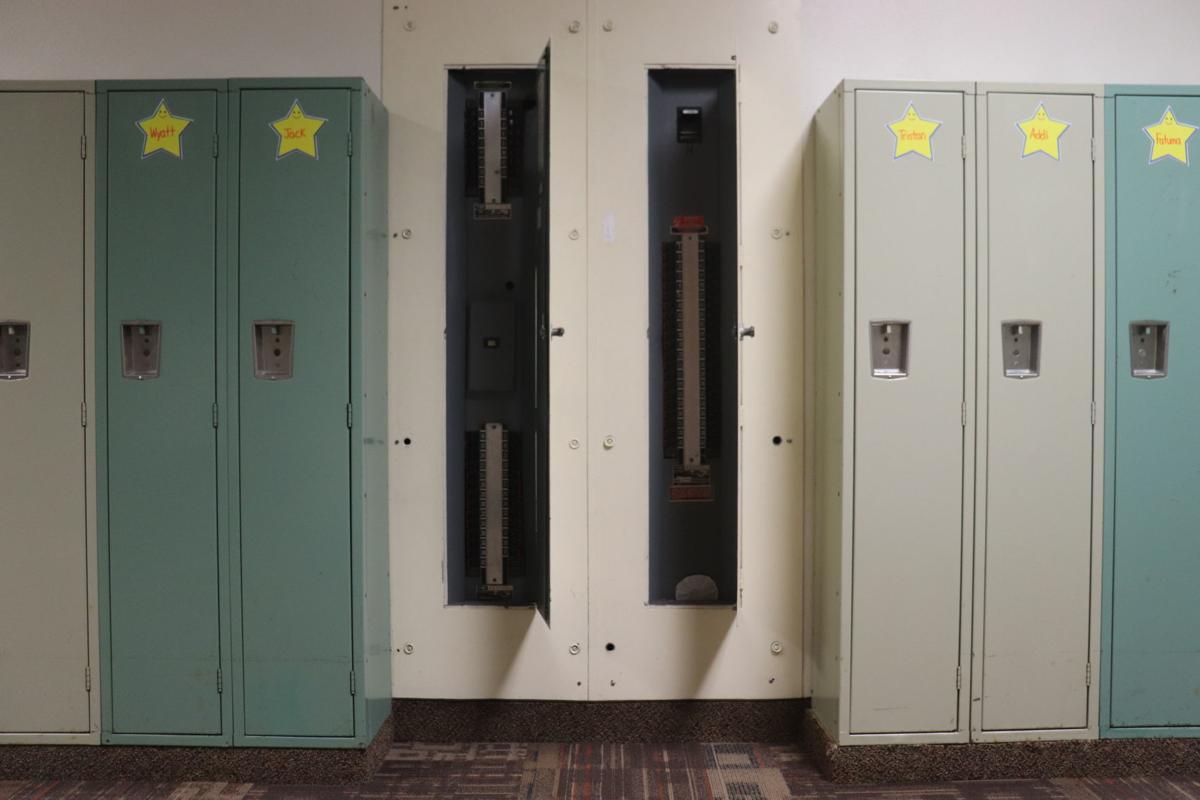 Electrical panels are placed between bays of lockers at Jordan Elementary School. 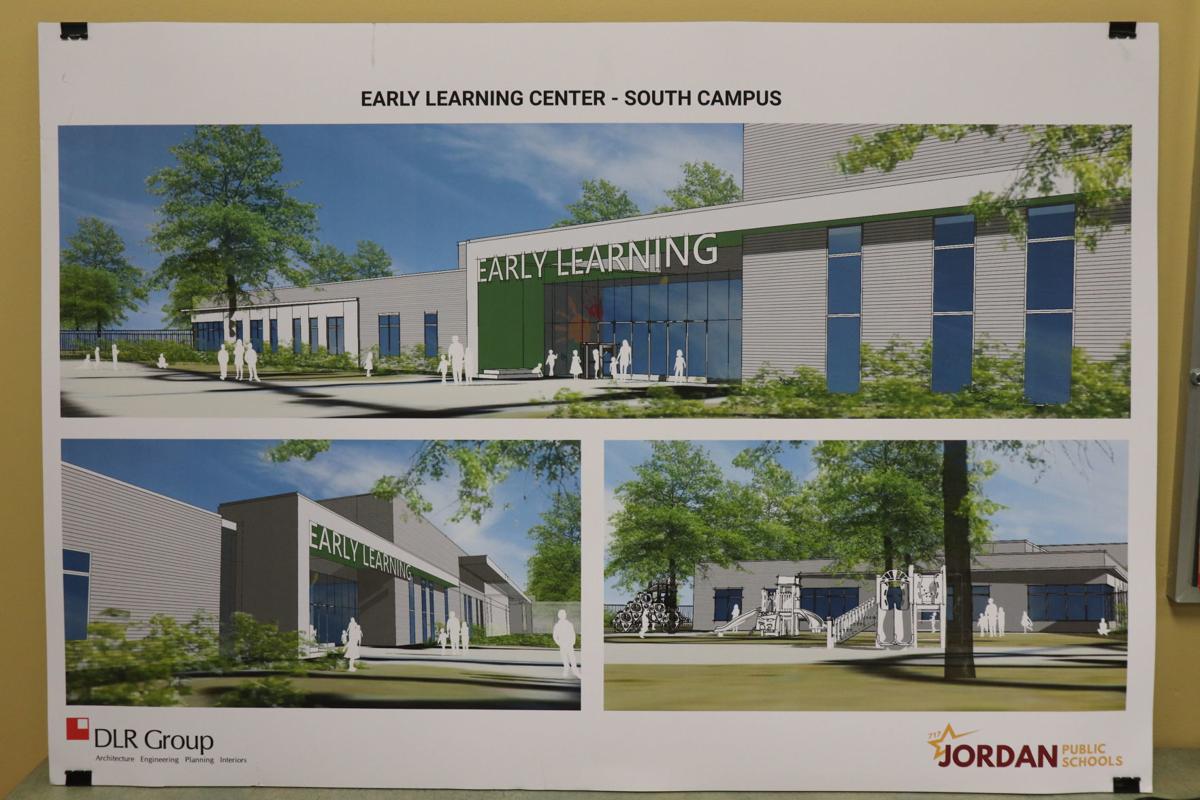 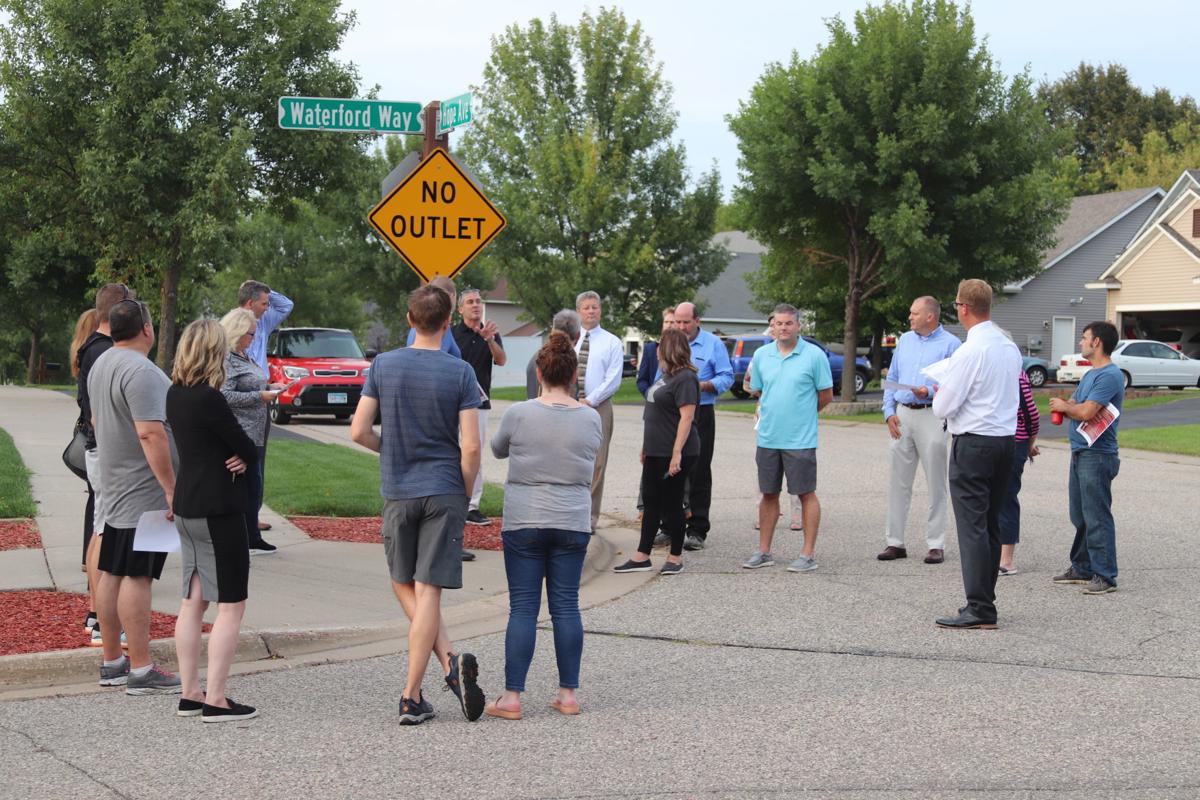 Members of the public gather near the site of the proposed early learning services building for an information meeting. 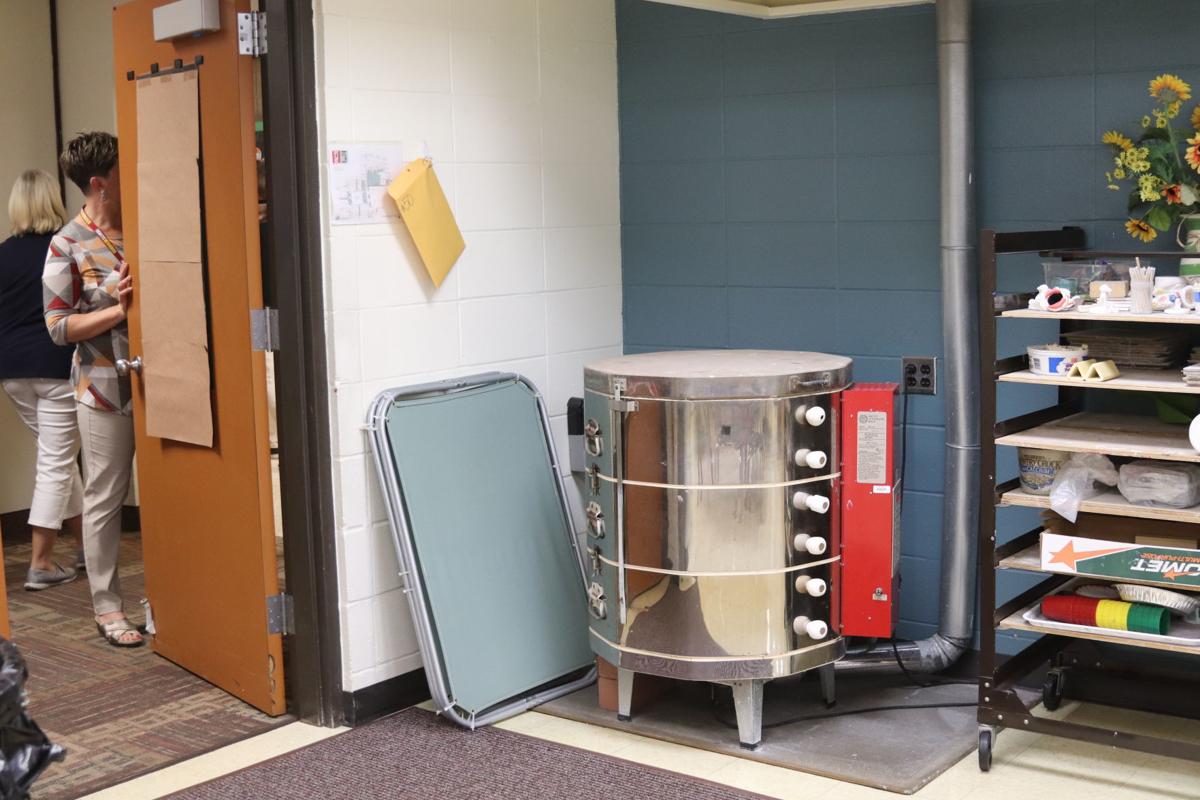 The kiln in the elementary school art room is not ideally placed.

Members of the public gather near the site of the proposed early learning services building for an information meeting.

This month, the Jordan Independent is exploring each question that will appear on the ballot, beginning with the proposal to raise the operating levy, which ran last week.

This week, we’ll look at the second question on the ballot, which reads:

“If School District Question 1 is approved, shall the board of Independent School District No. 717 (Jordan), Minnesota be authorized to issue general obligation school building bonds in an aggregate amount not to exceed $24,500,000 for acquisition and betterment of school sites and facilities, including but not limited to, reconstruction at Jordan Elementary School, construction of a new Early Learning Services building, construction of a secure entryway and classroom and infrastructure improvements at Jordan High School, and parking and driving access improvements districtwide?”

The first question on the November ballot will ask voters to raise the per-student operational levy by $300. If this measure fails, funding for the proposed projects included in questions two and three are not possible, essentially causing the entire referendum to fail.

The second question will ask voters to approve a $24.5 million bond that will fund four large projects: the construction of an early learning services building, elementary school renovations, a high school remodel and improved parking and drives.

The first two projects stem from a severe lack of space in the elementary school building, which also houses the district’s early learning services: Kid’s Company (before- and after-school program) and other pre-K programs.

If Question 2 is approved, those programs will be moved to a new building located on a parcel of district-owned land along Highway 21, near the east end of the Bridle Creek development. The district calls this parcel the “south campus.”

If the early learning services moved out, the elementary school would undergo classroom, infrastructure and cosmetic renovations. These projects include expanding the cafeteria by downsizing the gym and turning it into a multi-purpose room, while a new, full-sized elementary gym would be added onto the school.

Over at the high school, renovations would include construction of a STEAM lab (science, technology, engineering, art and mathematics). The district currently has one tech shop for STEAM programming, located at the middle school. If approved, the new shop would focus on programming, coding, engineering and design, while the current shop would be refocused on manufacturing, metals, woods and electrical.

High school renovations would also include moving the front office closer to the high school entrance to increase safety measures.

Another high-priority project is reconfiguring school and CERC parking lots and road access. Earlier this year, the district and Jordan City Council agreed to partner on a $24,193 traffic management study that would analyze congestion, particularly during pickup and drop-off hours, along Sunset Drive and Aberdeen Avenue. The two parties have agreed to split the cost of the study.

Long-term, the district sees the south campus as the potential home of a new elementary school. Superintendent Matthew Helgerson said if the elementary school moves in the future, renovations included in the referendum wouldn’t go to waste, as the current building would transition into district offices, health services, community education and space for Summit Academy programming.

The average Jordan home, valued at $250,000, currently contributes $1,049 in taxes to fund the school district’s operating authority and building bonds.

For a more detailed look at the referendum funding, see the first article in this series at jordanindependent.com.

Since 2003, the school district has grown by 447 students and projections show the district could add another 131 students in the next six years. These projections do not take into account the construction of a possible 400-home development neighboring the elementary school.

The growing pains are most evident in the elementary school, where district officials say lunch is a constant struggle. Helgerson and cafeteria staff detailed these difficulties at a June 12 informational meeting. Students begin lunch shifts as early as 10:50 a.m. and are crammed across the cafeteria and a multi-purpose room.

“It’s been too small for five to 10 years,” Helgerson said. “We’re using the multi-purpose room in addition to the cafeteria. The multi-purpose room was designed also to use for phy-ed; we’re using it mostly for lunch. Again, it’s the problem of several hundred more students there than when those spaces were built.”

Unlike most school cafeterias, food is served on a counter and not from a heated food well.

“The kids have to come right by the hot trays, we take them out of the hot holding units and have to serve them that way and it isn’t a safe way to feed kids,” Schaak said.

Safety concerns are present in some hallways, too, where electrical panels are placed between bays of lockers and can be opened with the turn of a handle.

In the art room, the ceramics kiln sits directly next to the entrance with no barrier from children entering from the hall. School staff said some younger children are frightened by the kiln, which heats clay and pottery at incredibly hot temperatures. Elementary art teacher Kristin Kilgren tries to limit kiln operation to after school hours. As a result, students are limited to one clay project a year.

But the kiln isn’t the end of the art room’s problems.

“One of the biggest pitfalls I see with the room is that there is only one sink,” Kilgren said. “Having a class of 25-plus students waiting their turn to wash their hands and paint supplies cuts significantly into instructional time.”

Outside the elementary school, a stretch of cars can be seen waiting to drop children off every morning.

“In terms of drop-off and pickup it is very congested, that’s just a fact,” Helgerson said.

“After seeing (early childhood family education) parking today, we really could use an early childhood building with its own parking,” resident Nicole Brandtner said.

And as the weather deteriorates, so does the drop-off process.

“It gets worse on inclement weather days,” Helgerson said. “Last week when it was raining all the time we had a mom who had to wait over 30 minutes to drop her child off.”

Remodeling the high school front entrance is also a high priority for addressing security needs. Right now the front doors open up to the cafeteria, with direct access to classroom hallways. The front office is currently situated beside the cafeteria.

“If you’re building that high school today you don’t build the office where it is,” Helgerson said. “That’s the big piece there, moving it up front to add a layer of security.”

District officials say if Question 2 fails they will not be able to address these problems and will return to the voters for a solution — noting that construction costs rise 3-5 percent annually and “taxpayers would pay more in the future to do the same work.”

Local resident Kerrie Snell said many of the big projects included in Question 2 aren’t designed for a small town like Jordan.

“We can not sustain the continuous costs of keeping up with the Joneses with educational fads, including state of the art buildings, community centers and academies,” Snell said. “Open enrollment is available if students want STEM and academies next door in Shakopee or through PSEO (post secondary enrollment options). Let’s do something innovative instead of focusing on what ‘other’ districts have.”

“This is a great opportunity for the district to expand and improve the elective offerings throughout the middle school and high school,” he said. “The STEAM program and Summit Academy are great examples of that value.”

The school district will host two more informational meetings ahead of the Nov. 5 vote. Community conversations will be held Oct. 1 and Oct. 21 at the Jordan High School and Jordan Elementary School, respectively.

More information on the referendum can be found at www.jordan.k12.mn.us/ref2019, including a tax calculator that allows residents to calculate their individual tax impact by entering their parcel ID.

Next week, the Independent will take a closer look at Question 3: A $15 million bonding measure that would fund a high school auditorium expansion and the construction of a multipurpose field.

A sample ballot for the upcoming referendum.

Over three weeks, the Jordan Independent examines each question on the ballot ahead of the $39.5 million Jordan Public Schools referendum. Each week, the paper will explore a different question appearing on the ballot, in order, and what it means for local residents.

The referendum will take place on Tuesday, Nov. 5.

To review a sample ballot, which contains all of the questions which will appear on the ballot this fall, visit