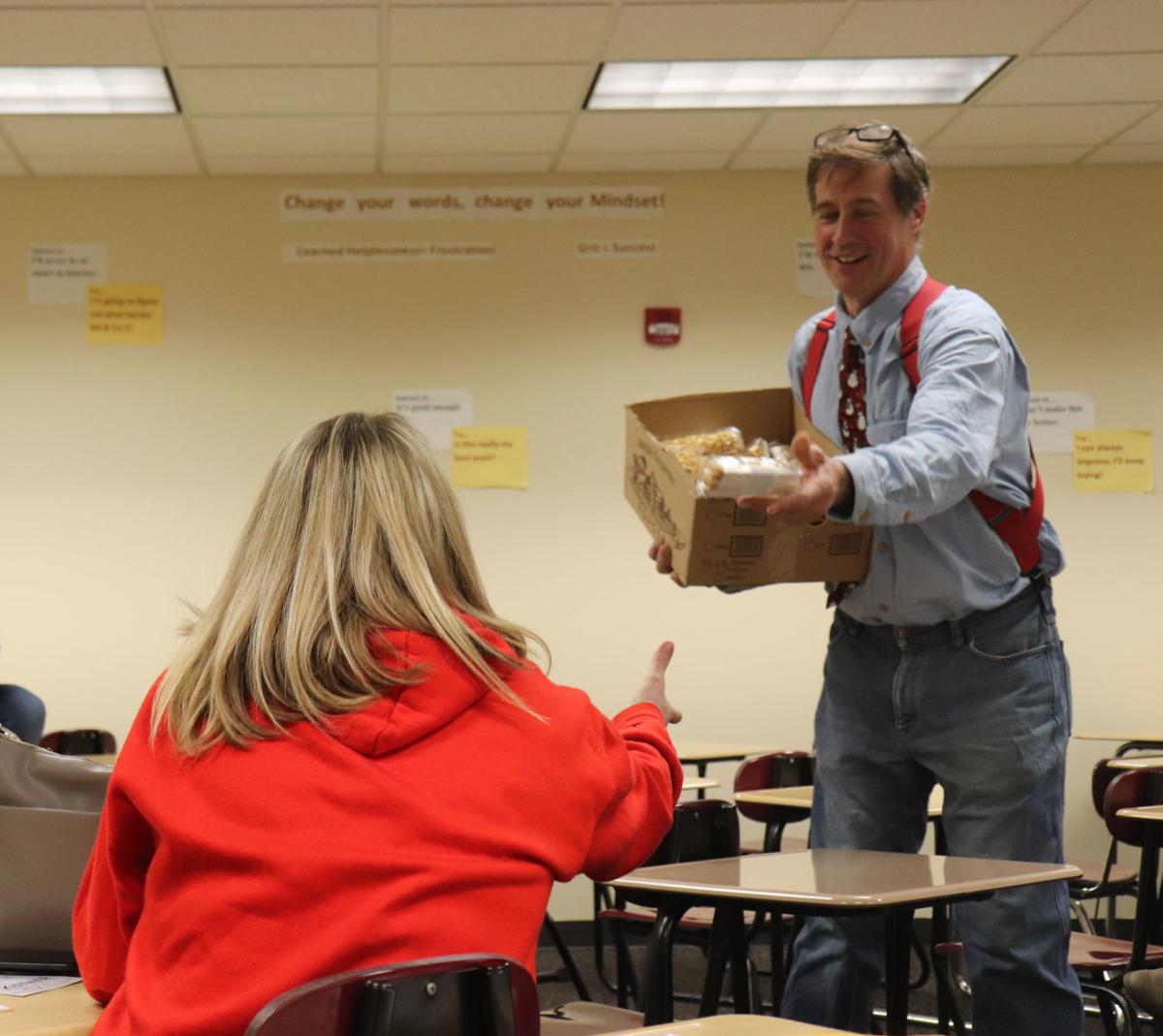 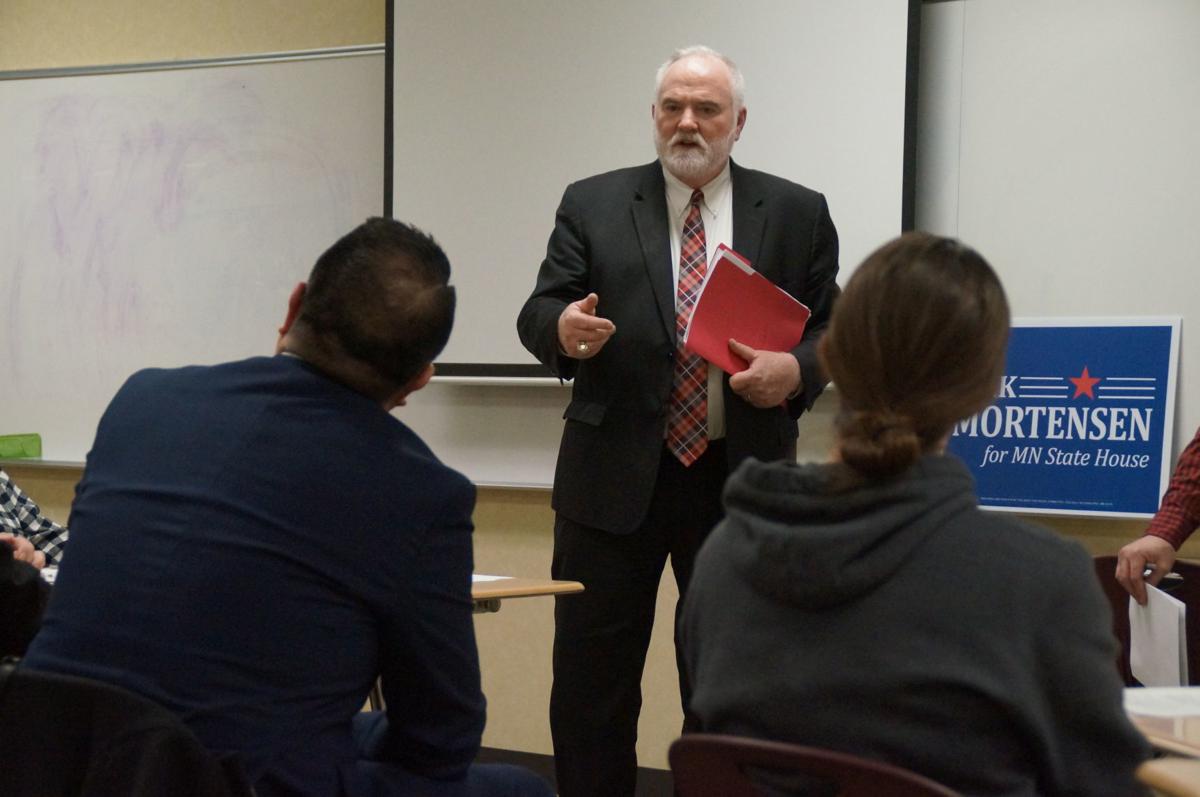 Bob Loonan called foul play against Scott County GOP, claiming the party misled delegates with a District 55A convention date that was different from the other districts' conventions. At that convention, after five votes, delegates chose not to endorse a candidate. Loonan's GOP opponent is Erik Mortensen, who won the SCGOP endorsement at the 2018 convention. 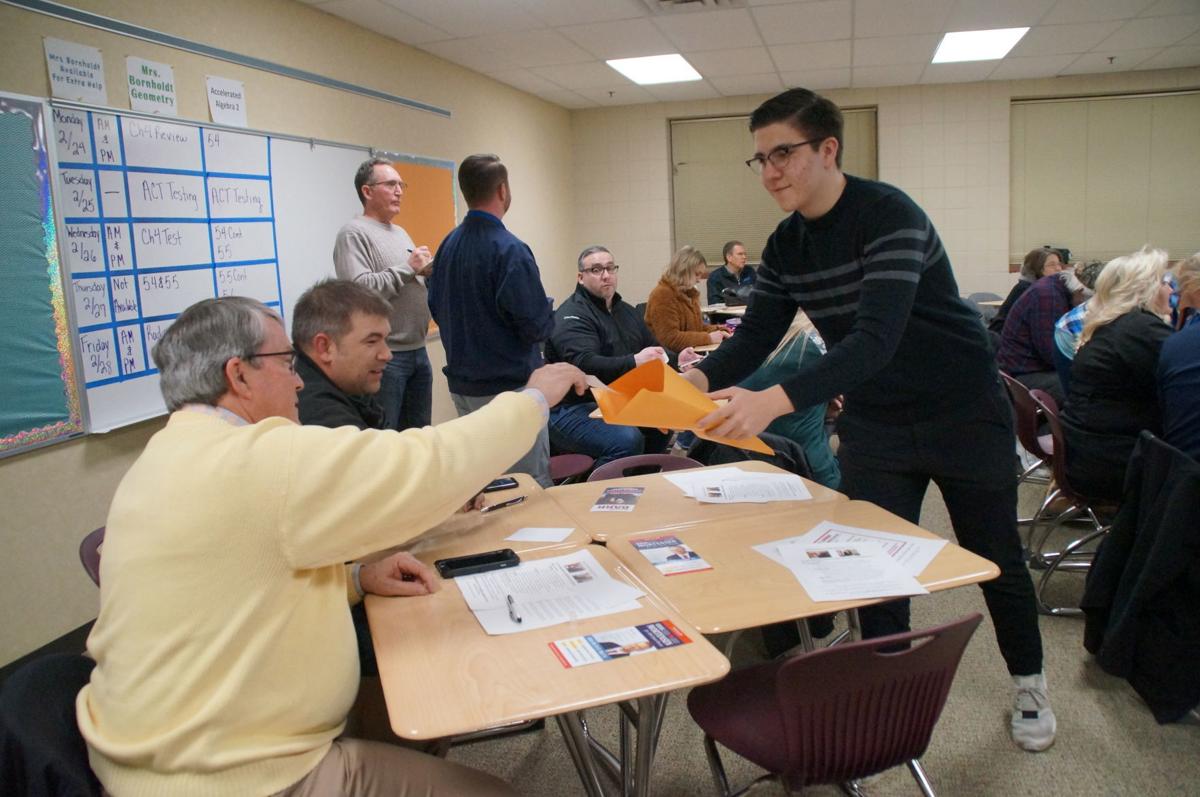 Matthew Pastrana, who was participating in his first-ever caucus as an 18-year-old, collected delegate votes from Scott County Commissioner Michael Beard at the District 55 GOP caucus at Shakopee High School. 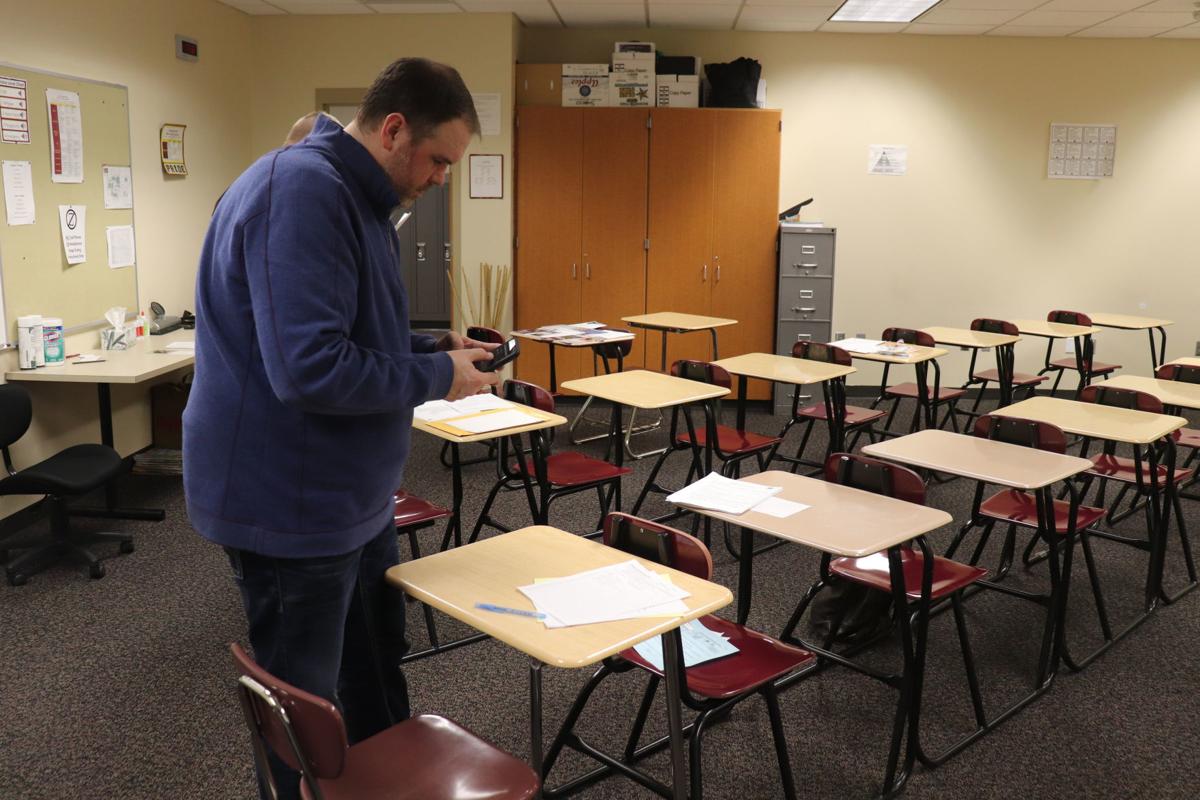 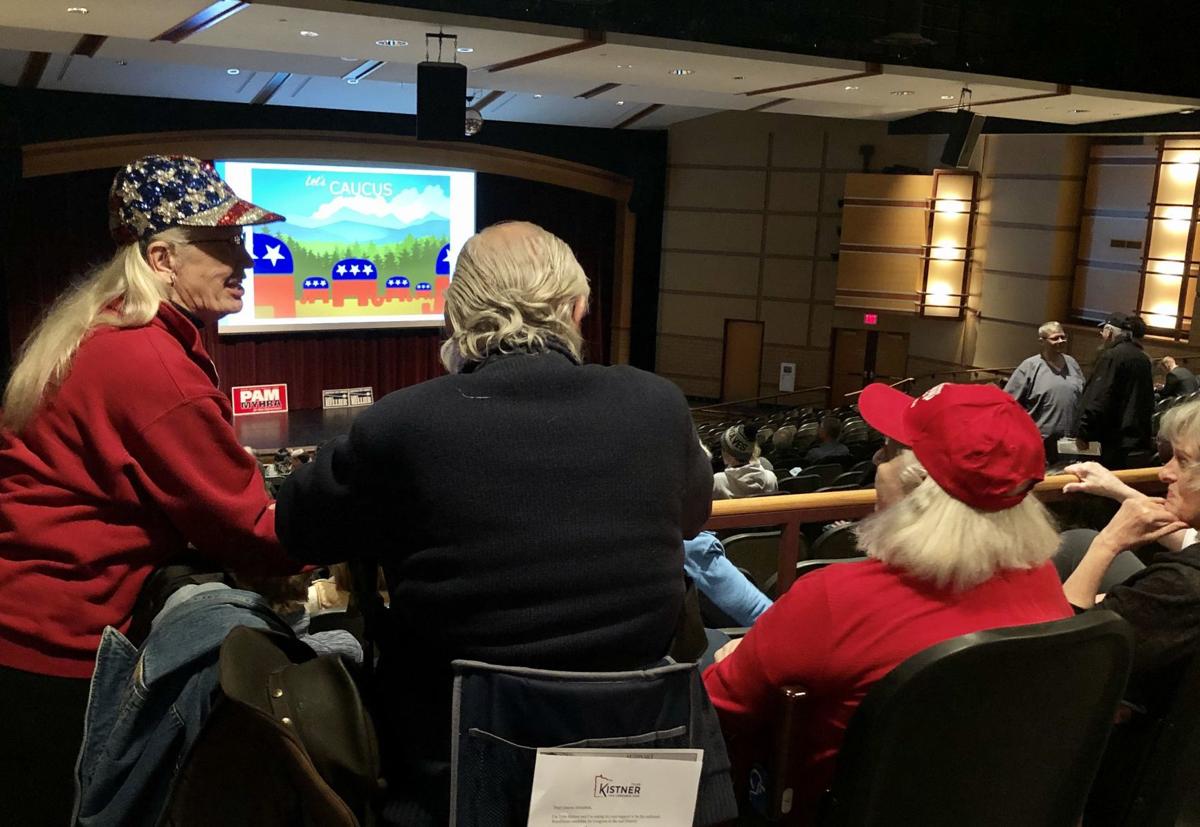 Around 100 voters from Minnesota Senate District 56 gathered at Prior Lake High School for the Republican Party caucus on Tuesday, Feb. 25. Community members were led in prayer by Sen. Dan Hall, R-Burnsville. 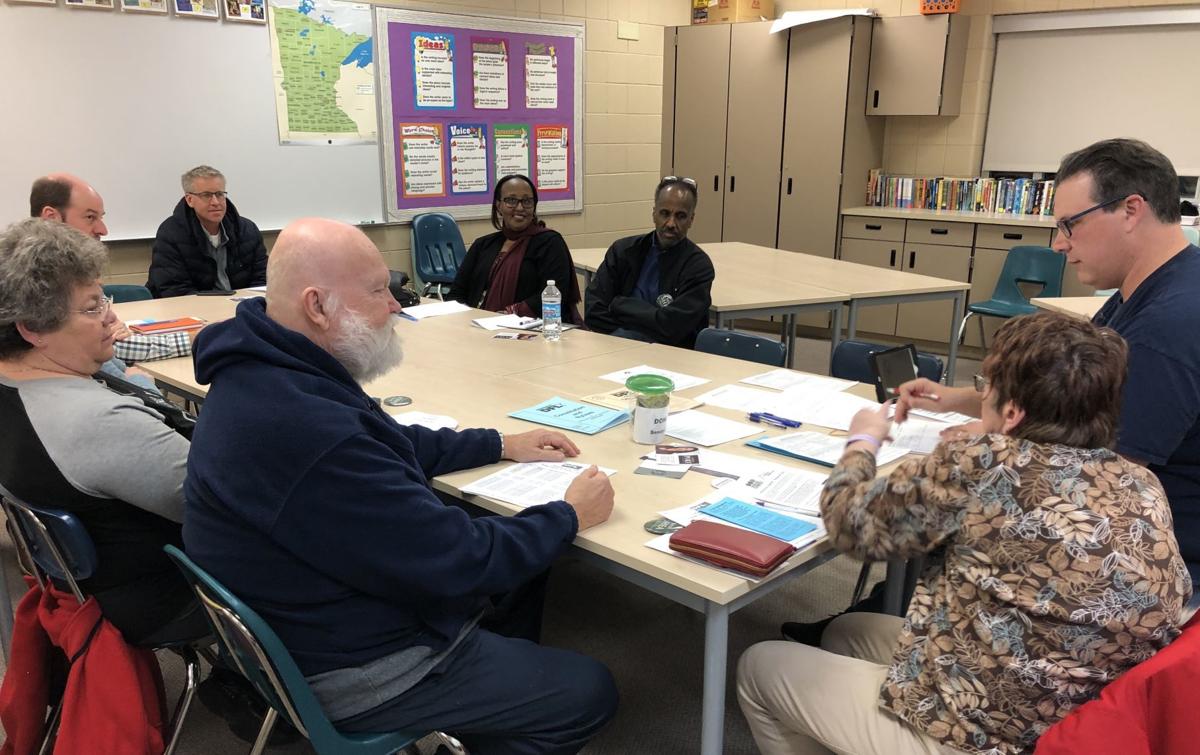 Voters in Minnesota Senate District 56 gathered inside classrooms at Eagle Ridge Middle School in Savage on Tuesday, Feb. 25, for the DFL caucus night. 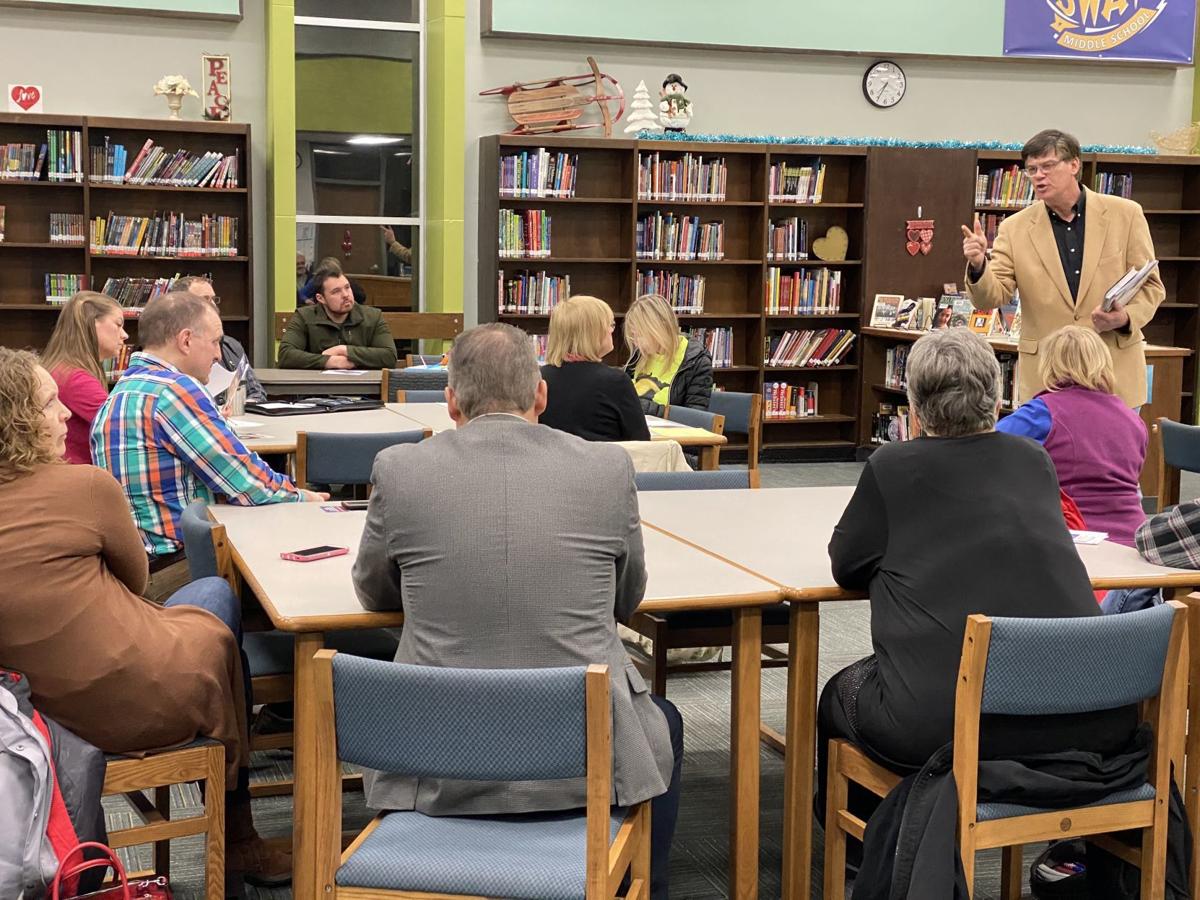 Sen. Eric Pratt (R-Prior Lake) addresses constituents in the Credit River precinct during the GOP caucus. Pratt, who faces a challenge this year by Shakopee Democrat Sahra Odowa, called the Republican-controlled state Senate the only backstop between voters and the DFL’s policy agenda. 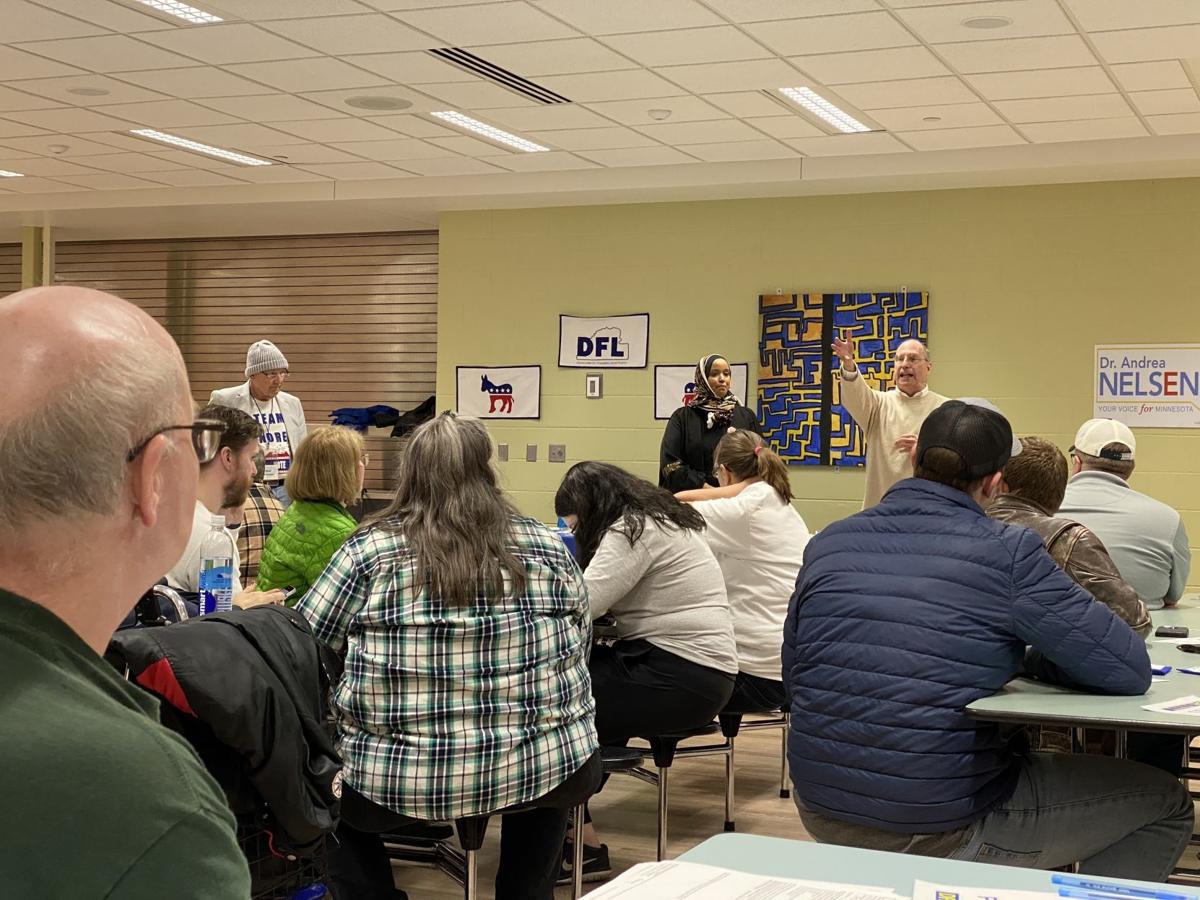 Bob Loonan called foul play against Scott County GOP, claiming the party misled delegates with a District 55A convention date that was different from the other districts' conventions. At that convention, after five votes, delegates chose not to endorse a candidate. Loonan's GOP opponent is Erik Mortensen, who won the SCGOP endorsement at the 2018 convention.

Around 100 voters from Minnesota Senate District 56 gathered at Prior Lake High School for the Republican Party caucus on Tuesday, Feb. 25. Community members were led in prayer by Sen. Dan Hall, R-Burnsville.

About 25 people filled a classroom on the third floor of Shakopee High School for GOP precinct caucuses Tuesday night.

In one corner of the room, an 18-year-old named Matthew Pastrana participated in his first-ever caucus. At the other end of the room, a man named Lon Dugan, who wore a camouflage Make America Great Again hat, sat through something like his 40th caucus.

“This turnout is 400% better than it was two years ago,” District 55 GOP Chair Joseph Ditto said.

A week before Super Tuesday, hundreds of Scott County residents turned out to caucus Feb. 25. For the first time in decades, Minnesota will participate in a primary election March 3, which will determine which candidates will be on the ballot in the November general election.

Shakopee resident Erik Radtke said most Shakopee GOP residents caucusing this year are there because they want to beat U.S. Congresswoman Angie Craig, a Democrat.

Radtke wanted people to know his U.S. Congress vote will be with Tyler Kistner, a Republican. “He’s a young millennial, who’s hungry and dedicated,” he said.

The general consensus amongst most residents, however, was not who to elect, but how the party would beat its current DFL representatives.

“Whoever we choose, we’ve got to be unified and back that candidate,” Ditto said. “That’s where we fell apart last time.”

House 55A Rep. Brad Tabke, a democrat, is running for re-election, uncontested. Republican candidates Erik Mortensen and Bob Loonan are running for Tabke's seat in a race that looks similiar to 2018.

Prior Lake and Savage

In Prior Lake, neighbors split up by party between the city's two middle schools with GOP voters caucusing at Twin Oaks and DFL voters gathering at Hidden Oaks. About 50 people made their way to the Hidden Oaks cafeteria and about 40 came out to caucus at Twin Oaks.

At both events the atmosphere was congenial and diligent with neighbors on both sides saying elections at the state and national level this year hold a particular importance. Several first time caucusers at both events said it was the contentious 2016 caucus and presidential election that brought them out Tuesday night.

"After the election in 2016, I can't just assume that everyone is going to take care of getting the right message out," Jim Reinertson, the sole DFL caucus member from Prior Lake's 6a precinct said. "It's time to step up and do my civic duty."

The evening gave voters and potential party delegates a chance to meet with several of the Prior Lake candidates running in state races this year.

Dr. Andrea Nelsen, a DFL candidate for the House 55B seat currently held by Tony Albright, R-Prior Lake, split her time between caucus events in Jordan and her home precinct in Prior Lake. She said despite a lower turnout than 2016 in both cities, Nelsen said she was motivated by an engaged and energetic crowd.

"We are really lucky to have this especially when you're talking about state and local races," Nelsen said of the caucus system. "This gives us a really grassroots way to choose our candidates."

Though being in a home territory didn't give all the candidates a home field advantage. When Sen. Eric Pratt, R-Prior Lake, met with the Credit River precinct at the Twin Oaks events, voters challenged him to explain his voting record on issues like health care and abortion.

Nelson leads Citizens' Climate Lobby, a nonpartisan environmental action organization, and said Craig brings the district together and holds democracy at the heart of her work.

In Jordan, about a dozen residents gathered for the GOP precinct causes at Jordan High School. Party caucuses for Belle Plaine, Sand Creek Township, Blakely Township and St. Lawrence Township were also held on site. There were no attendees from St. Lawrence.

Jordan's first precinct passed three resolutions to amend the state platform. The first resolution reaffirms school choice and voucher programs; the second proposes that no Minnesota tax dollars are used to fund Planned Parenthood; and the third calls for elected officials to strictly adhere to the party platform when drafting and voting on legislation.

Caucus leader Mike Franklin said there was greater turnout this year than in 2018, but far less than in 2016.

"Four years ago we had to move this meeting into a bigger room because there were so many people," Franklin said. "That had everything to do with choosing a candidate for president."

Franklin said he's happy to see the state's parties transition to ballot voting instead of caucusing for this year's presidential primary.

"This (caucusing) is better than feats of strength — but just so," Franklin said.

What is a caucus?

Precinct caucuses are meetings run by Minnesota's political parties, according to the Minnesota Secretary of State's Office.

While each political party runs the caucus meetings a little differently, there are three main activities that usually happen, according to the Secretary of State's Office:

The absentee/early voting period started mid-January this year and extends until Super Tuesday. Absentee voters can fill out their ballots via mail, online or in person.

Correction: An earlier version of this story gave the wrong city for Eagle Ridge Middle School, which is in Savage.