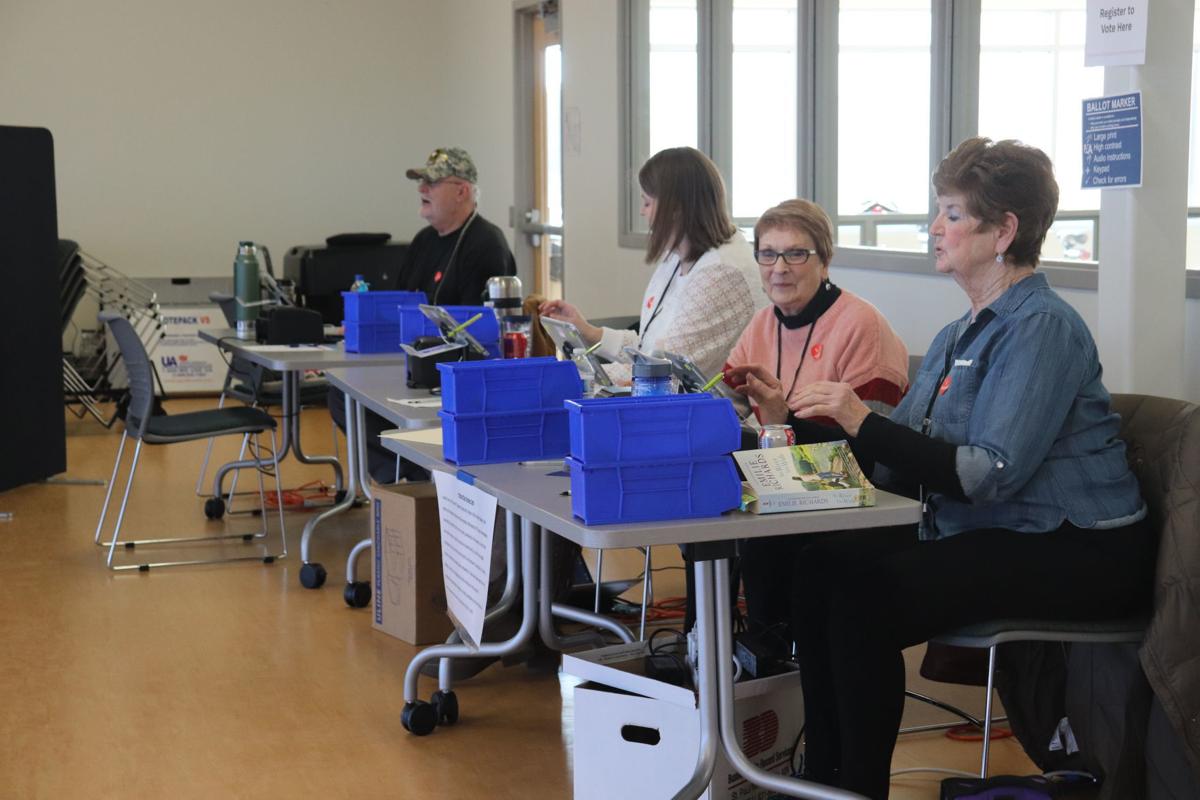 Jordan election judges at the CERC on Super Tuesday. 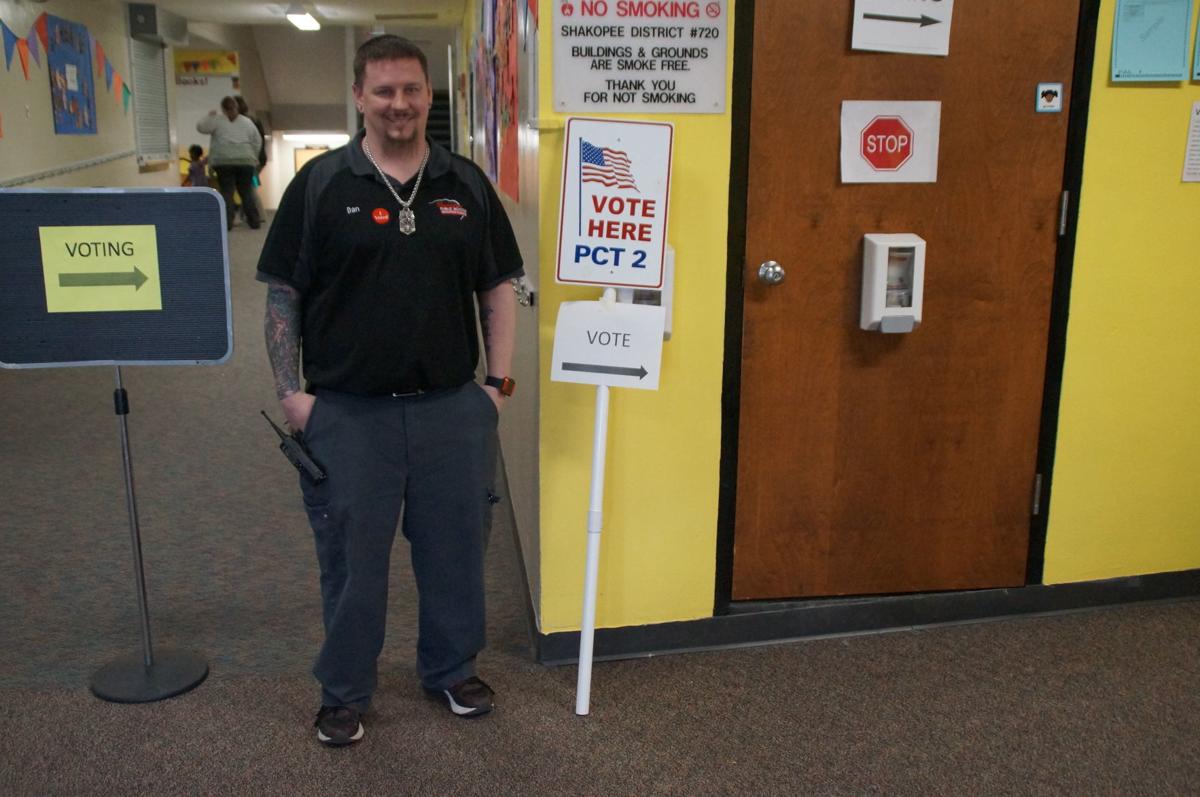 Shakopee resident Dan Lehman said he voted for Donald Trump at the primaries on Super Tuesday. 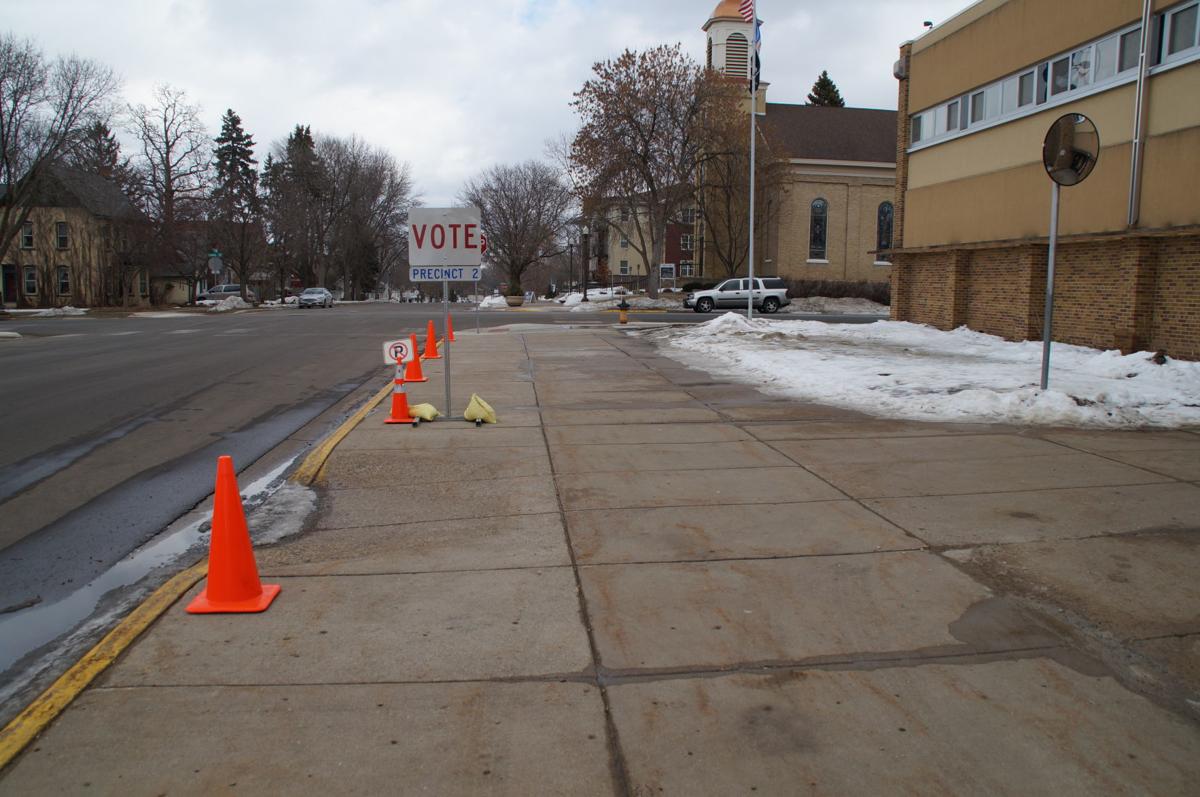 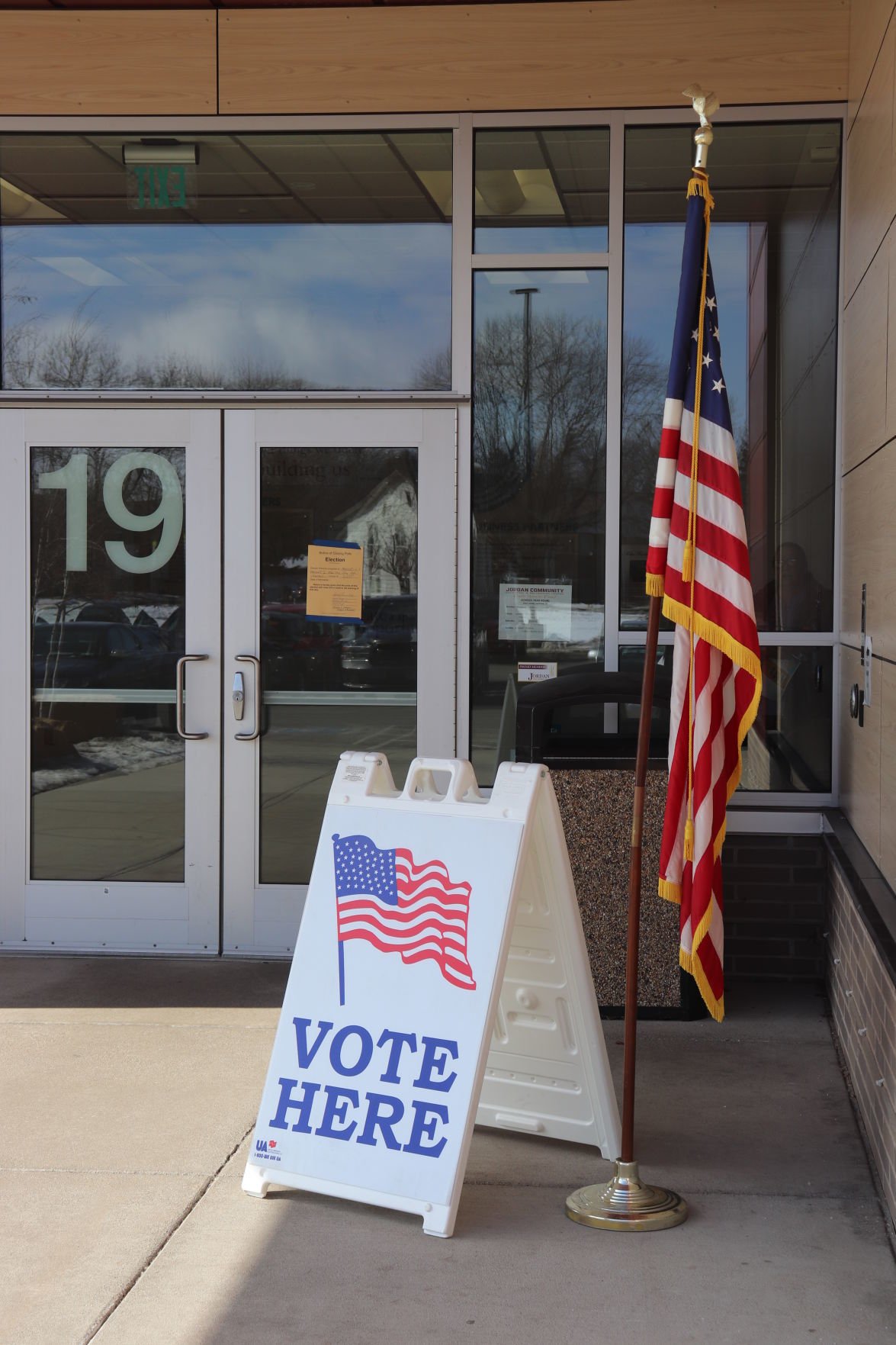 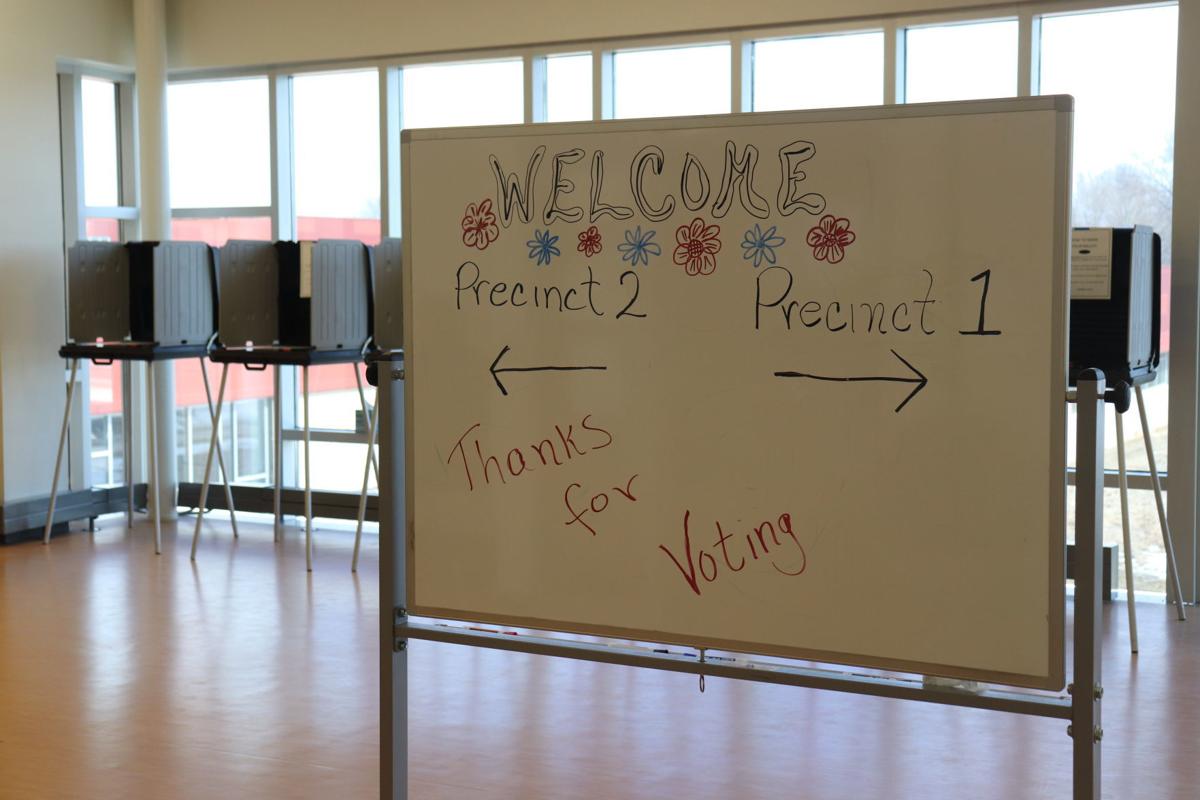 Both Jordan precincts voted at the CERC on Super Tuesday.

Jordan election judges at the CERC on Super Tuesday.

Shakopee resident Dan Lehman said he voted for Donald Trump at the primaries on Super Tuesday.

Both Jordan precincts voted at the CERC on Super Tuesday.

Scott County Democratic voters picked Joe Biden as their favorite presidential nominee on Super Tuesday, according to unofficial election results from the Minnesota Secretary of State.

On the Republican side, supporters for President Donald Trump, the only candidate on the ballot, cast 3,144 votes for the presidential primary, about 97.5%. There were 81 write-ins.

By 1 p.m., 86 voters of the 1,848 registered in the precinct had filled out ballots at Central Family Center in Shakopee, election judge Steve Sinnen said.

“You missed the lunch crowd,” Sinnen joked. “There were about three people.”

Dan Lehman, a custodian at Central Family Center wore an “I Voted” sticker after he filled out a ballot for Trump at Precinct 2.

“It wasn’t a hard decision for me,” Lehman said.

At East Middle School, where Shakopee’s first precinct is located, participation was greater. There had been 160 voters, and the election judges at the polling place said about 20 people came through around lunchtime.

Shakopee resident Laurie Grussing said she would have preferred to vote for Warren, but she felt like Biden was more likely to defeat Trump.

Jodi Chromey, who lives in Precinct 7, said she also voted for Warren.

“Men have run the country long enough,” she said. “It felt good to vote for a woman.”

In Savage, Jackie Williams said she cast her ballot for Biden after Klobuchar's exit from the race the previous day.

"She was my candidate," she said. "I followed her lead and voted Biden."

Savage resident Ken Williams said he still cast his ballot for Klobuchar in a show of support for her campaign. He said he hopes a Democratic candidate will "inject sanity and stability" into the federal administration.

Turnout in Jordan was also a little lower than expected in the early hours of Super Tuesday, according to longtime election judge Jerry Langsweirdt, who speculated that the lack of a Republican primary challenger to Trump and a wide pool of Democratic nominees may have prevented some from rushing to the polls.

Residents like Tonya Pettibone still showed up to cast a vote for Trump.

"I wanted to show solidarity with the candidate and the party," Pettibone said.

Langsweirdt said some voters have been troubled by the fact that the ballots are split down party lines, particularly because state statutes then allow the parties to collect voter names and addresses.

"It's a law that's been on the books, but we haven't had to deal with it until now," Langsweirdt said.

Jeff Goldy of Prior Lake said he was surprised and then frustrated when a voting judge at the Church of Saint Michael asked to see his ID.

Minnesota law doesn't require a voter to present photo identification in order to vote. A Minnesota’s driver’s license or ID can be used to pre-register before a vote or register on the day of a vote, but it's only one way to prove residency and isn't required.

A recent state election judge guide tells judges “a voter may hand you an ID to assist with locating their name, particularly if the spelling is difficult.”

Goldy said it’s the first time he’s been asked to show his ID to vote in his 16 years in Prior Lake. He said that he told the judge that he was disappointed, but he was allowed to check in and vote without showing his ID.

As Goldy was leaving, a second voter was asked the same question, he added.

Goldy called Prior Lake City Clerk Ann Orlofsky to report the incident. Orlofsky contacted the head election judge at the precinct and reminded her that it’s illegal to ask voters to present an ID.

“We haven’t had any issues since,” Orlofsky said. At 5 p.m. Tuesday, Orlofsky said Goldy’s was the only report of the issue she’d received.

Orlofsky said judges received a two-hour training prior to that election about state voting statutes, judges’ Election Day roles and the Poll Pads, the electronic poll book used in some precincts to check in registered voters.

The judges also received an additional hour of training this year on presidential primaries in preparation for Tuesday’s vote.

More than half of the state's voters in 2012 voted against an amendment to the state constitution requiring valid photo ID at polling places. But several legislators have begun the conversation anew this year.

In February, Sen. Eric Pratt, R-Prior Lake, and four other Republican senators introduced a bill, SF3571, to add a photo ID requirement and create a free voter ID card as an option. The bill was sent to the Senate Transportation Finance and Policy Committee on Monday and is set to receive a hearing.

Supporters of such a policy often say IDs could prevent voters from pretending to be someone else and other kinds of fraud. Opponents say voter fraud is rare and that requiring IDs can make voting more difficult for low-income people and other groups.