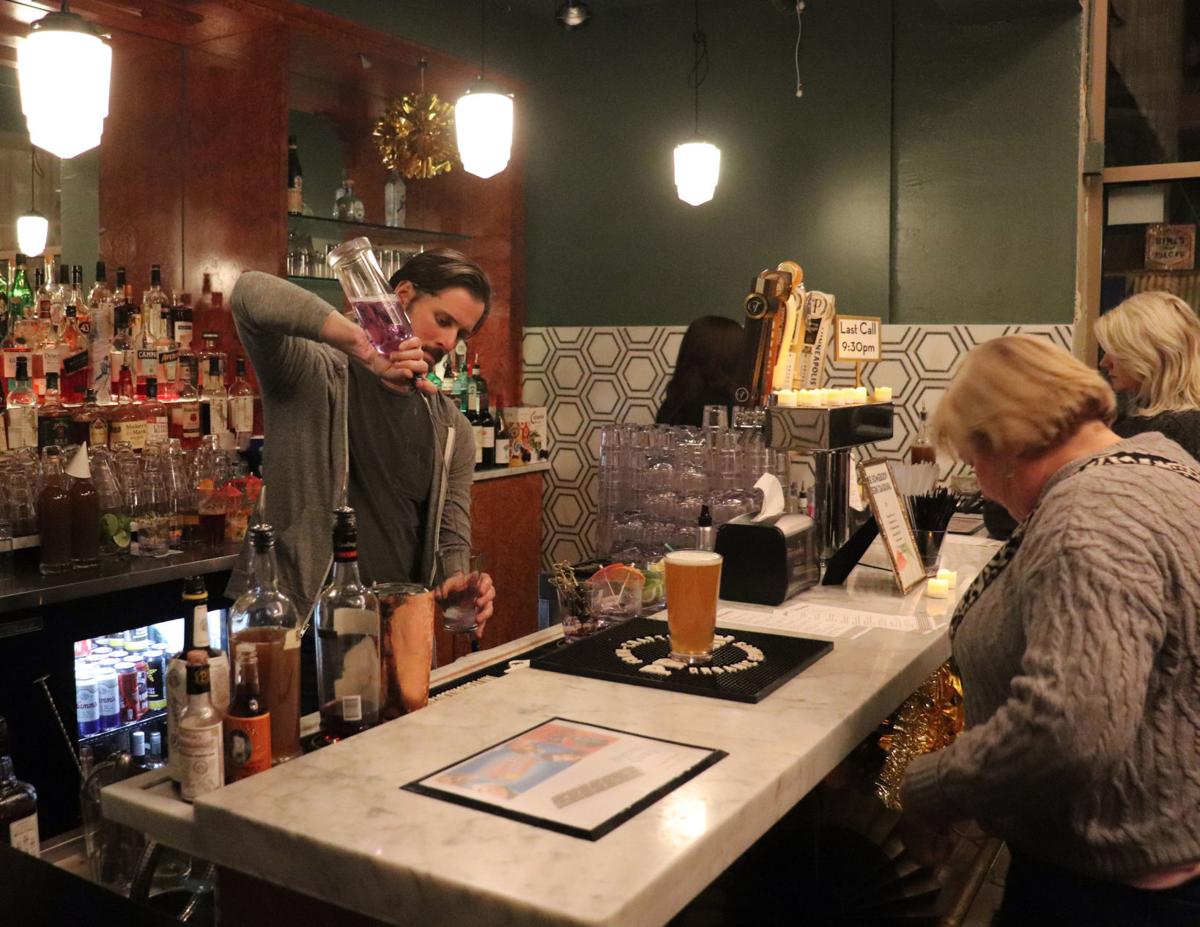 The Parkway Theater features a full-service bar with signature cocktails and craft beer. 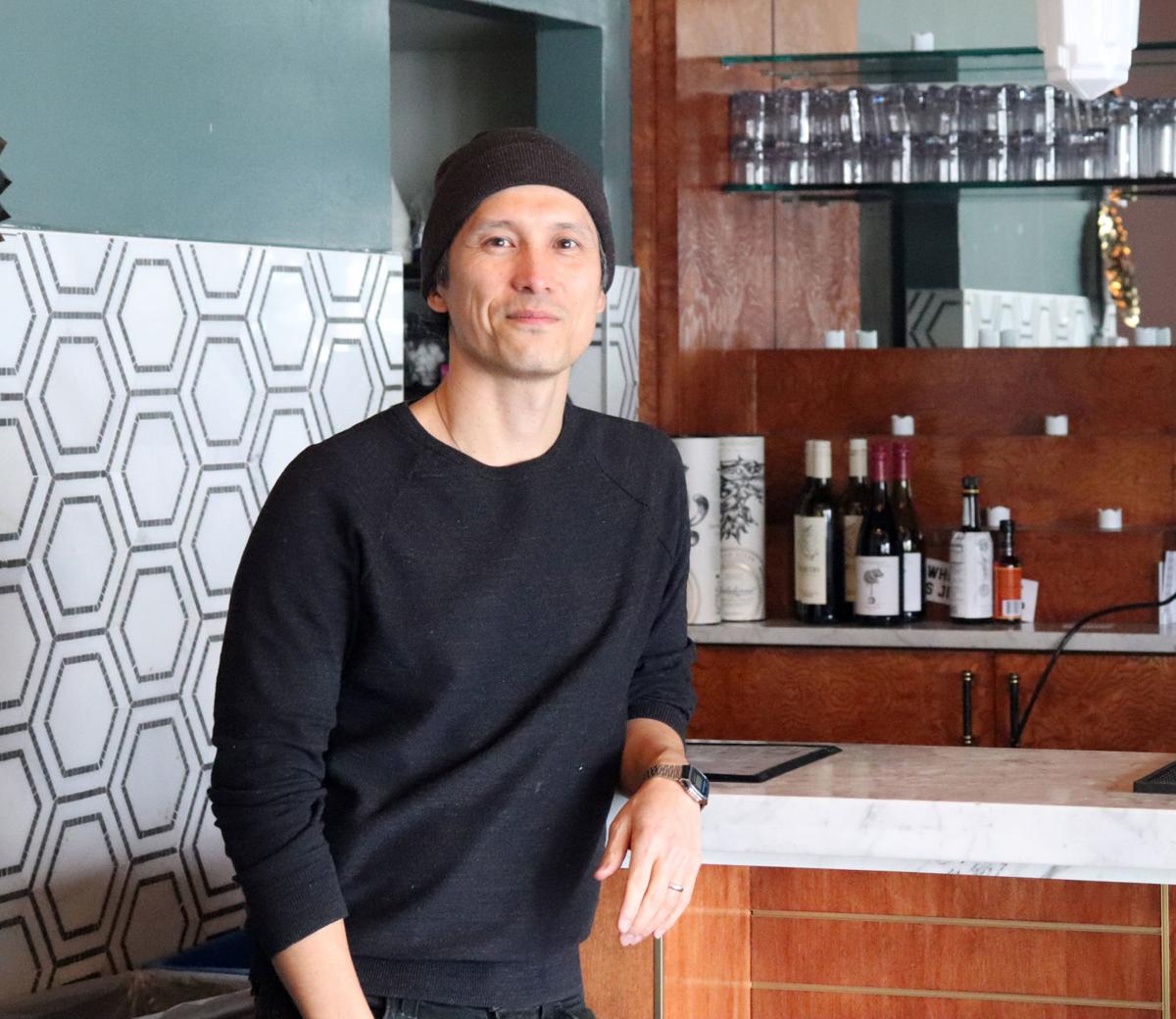 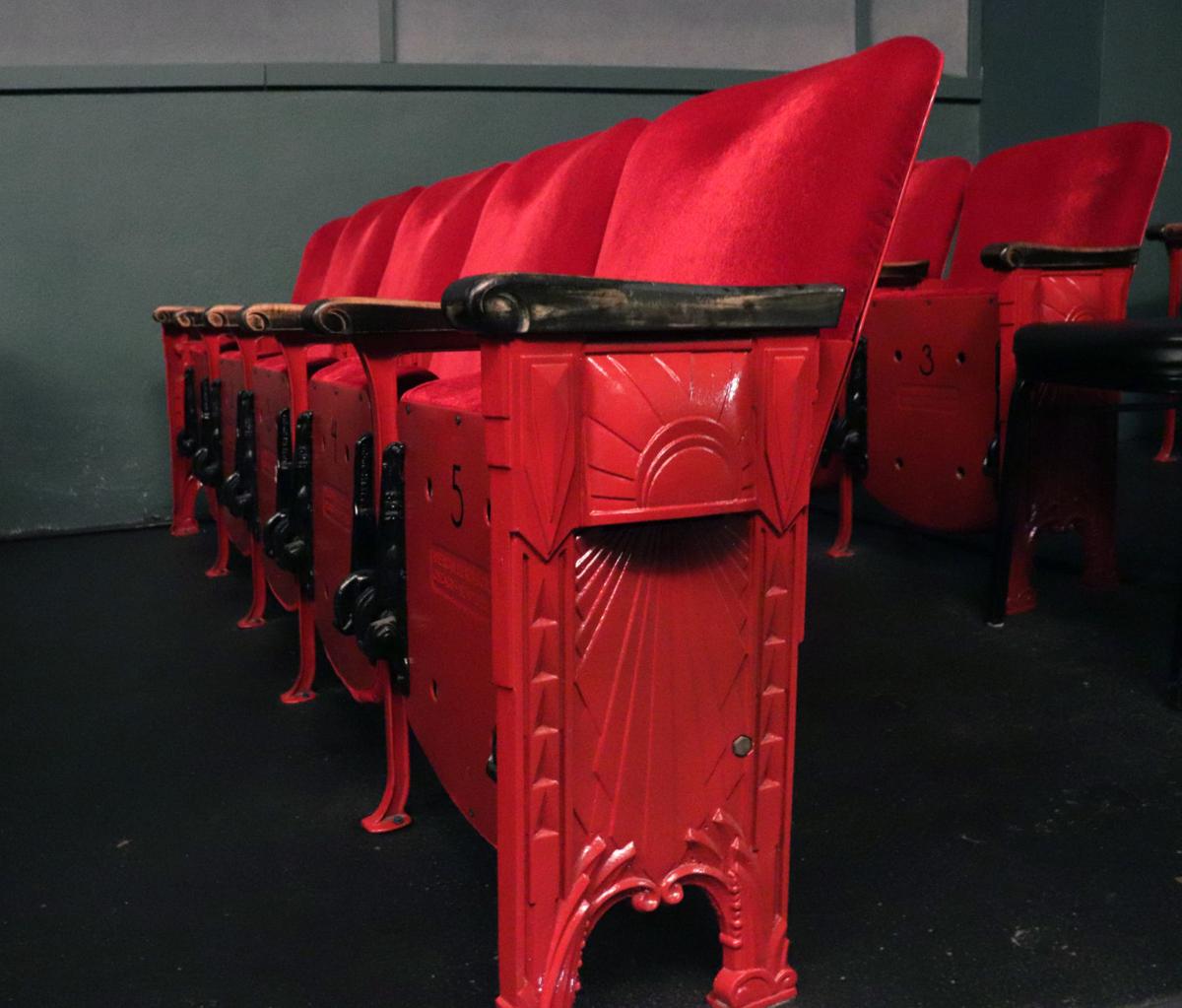 The new owners of the Parkway Theater kept the original, art deco seats — but added some much-appreciated leg room. 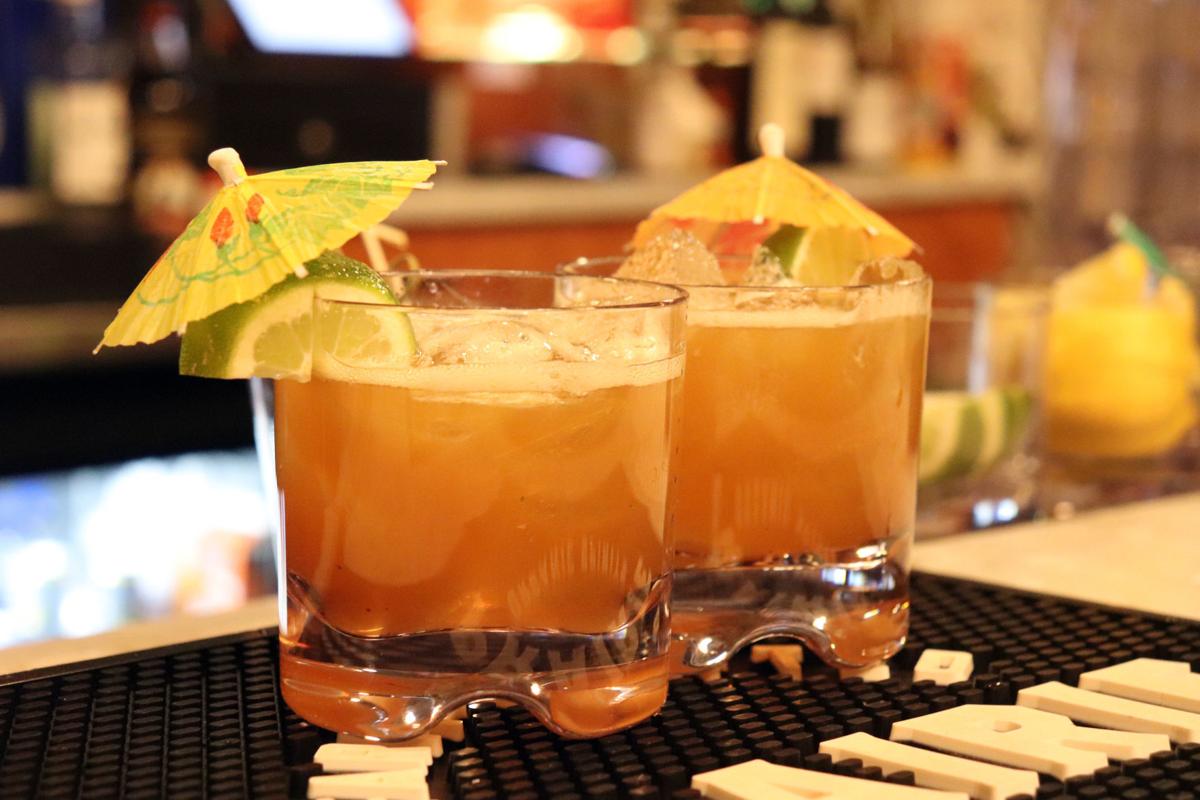 “Be Somebody!” — a daiquiri inspired by a classic Steve Martin scene, was featured during the Parkway’s screening of “The Jerk.” 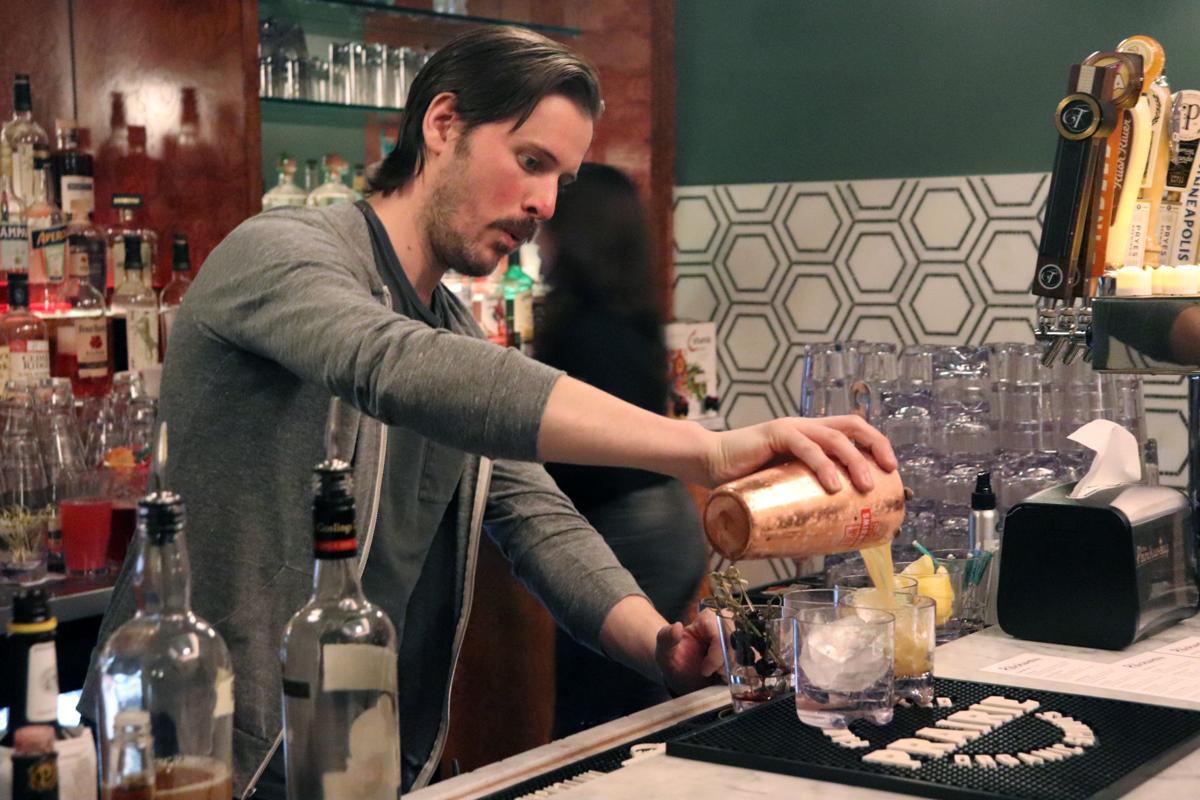 Mike Byrne, the theater’s mixologist, crafts a special drink for each Thursday feature. 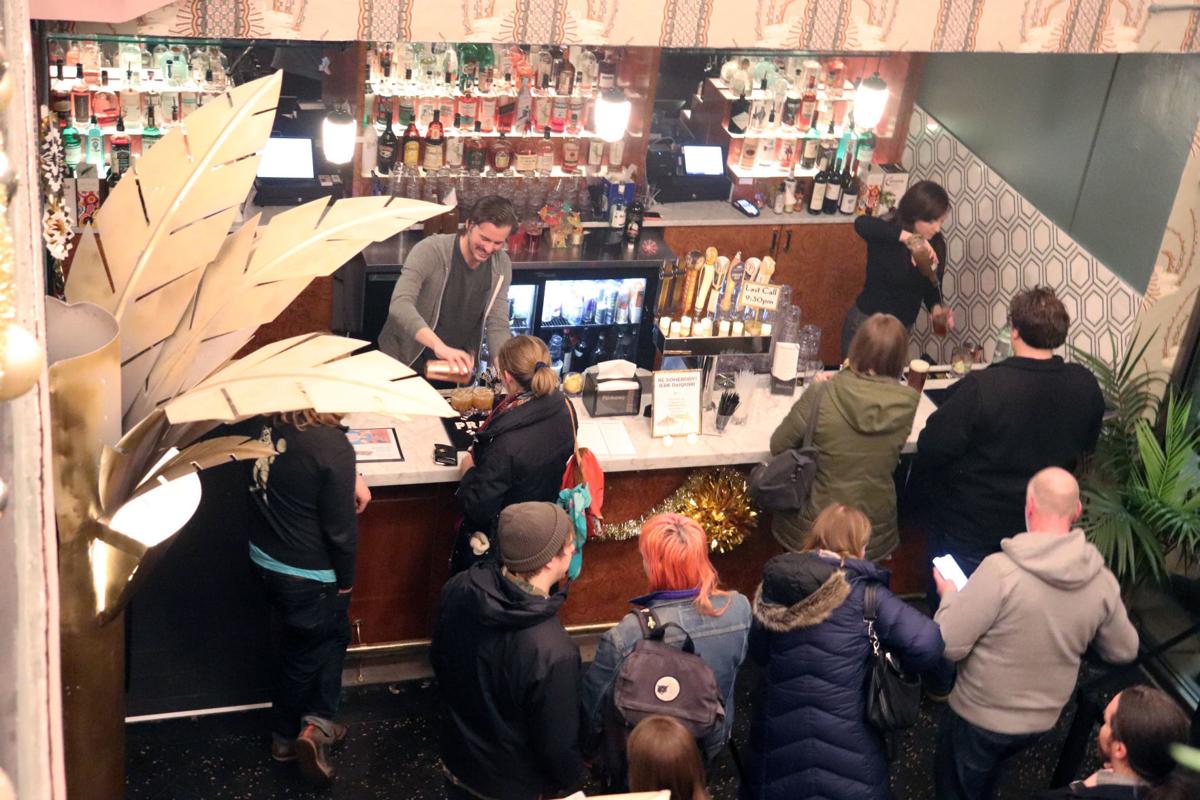 Guests line up for craft cocktails and beer before a screening at the Parkway. 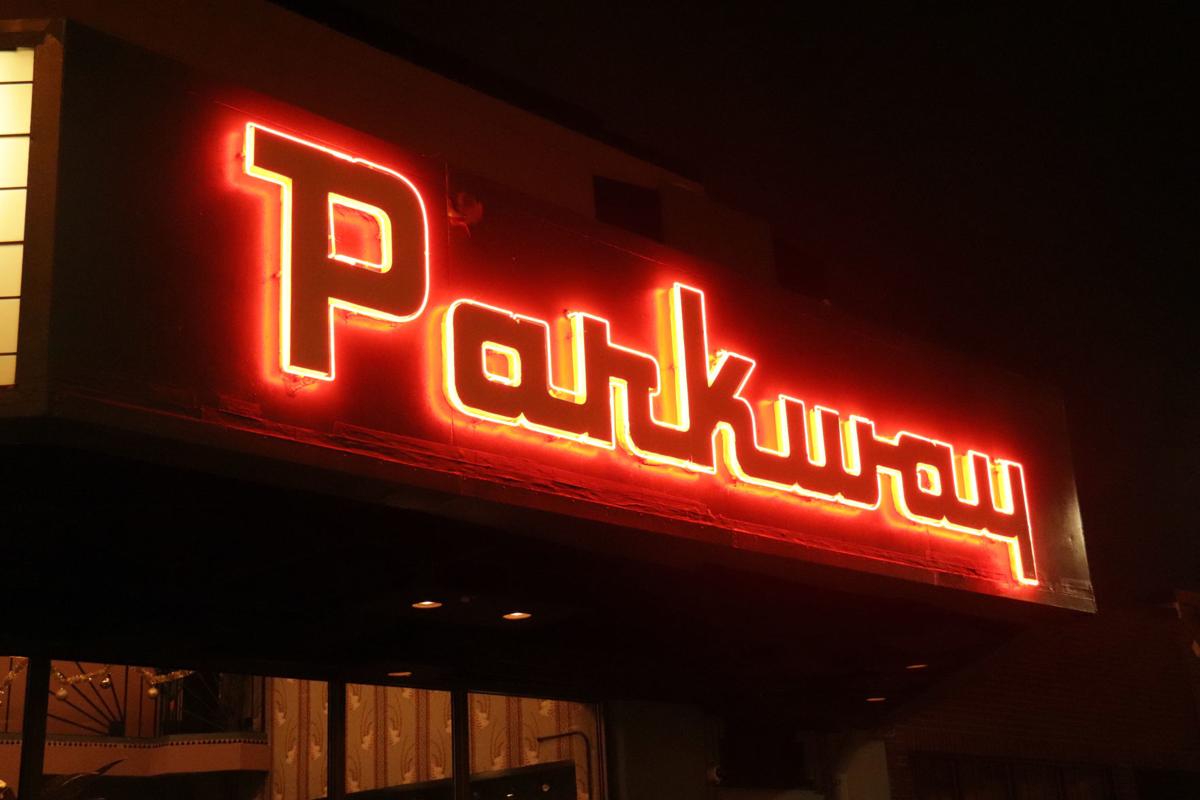 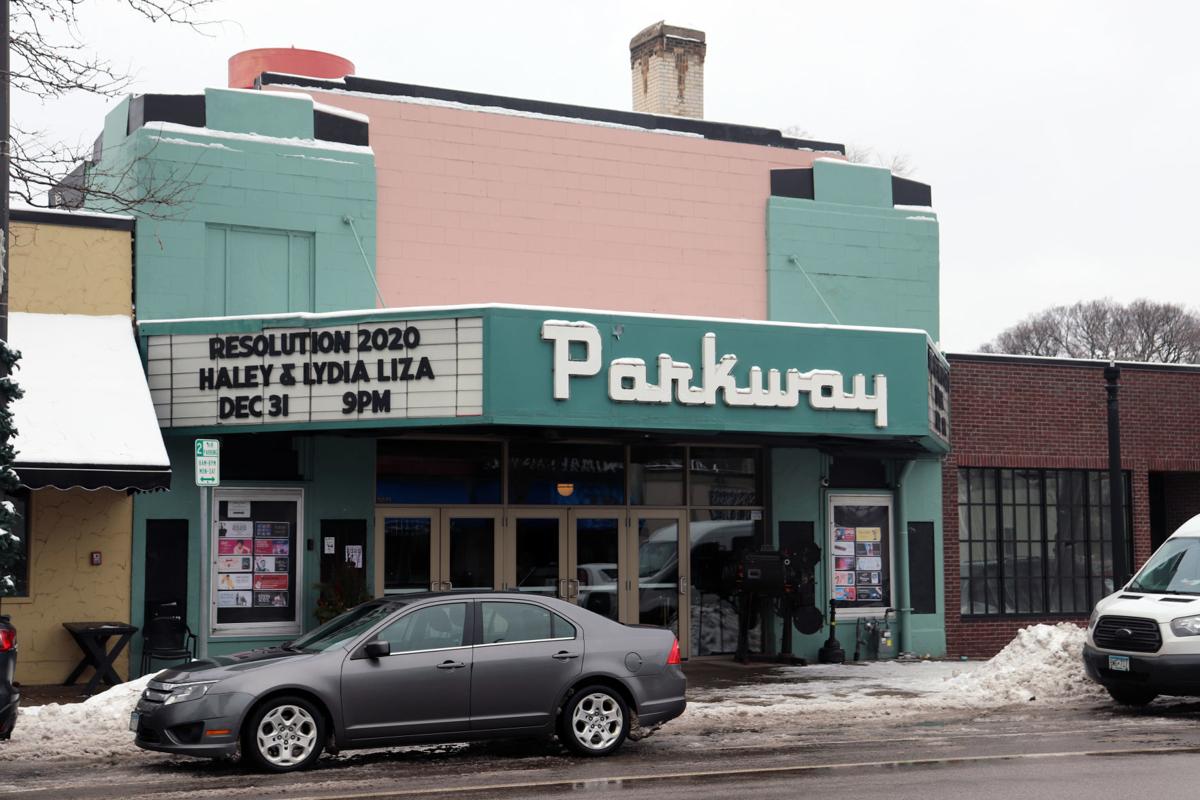 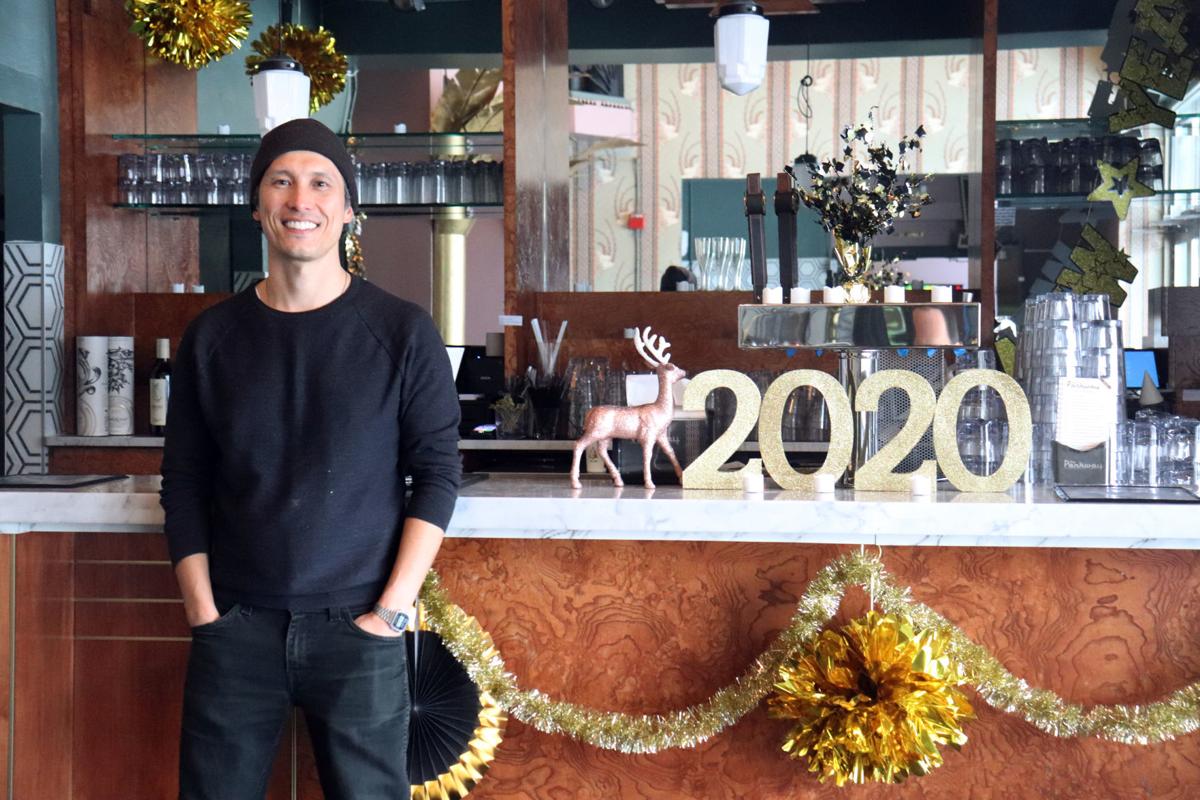 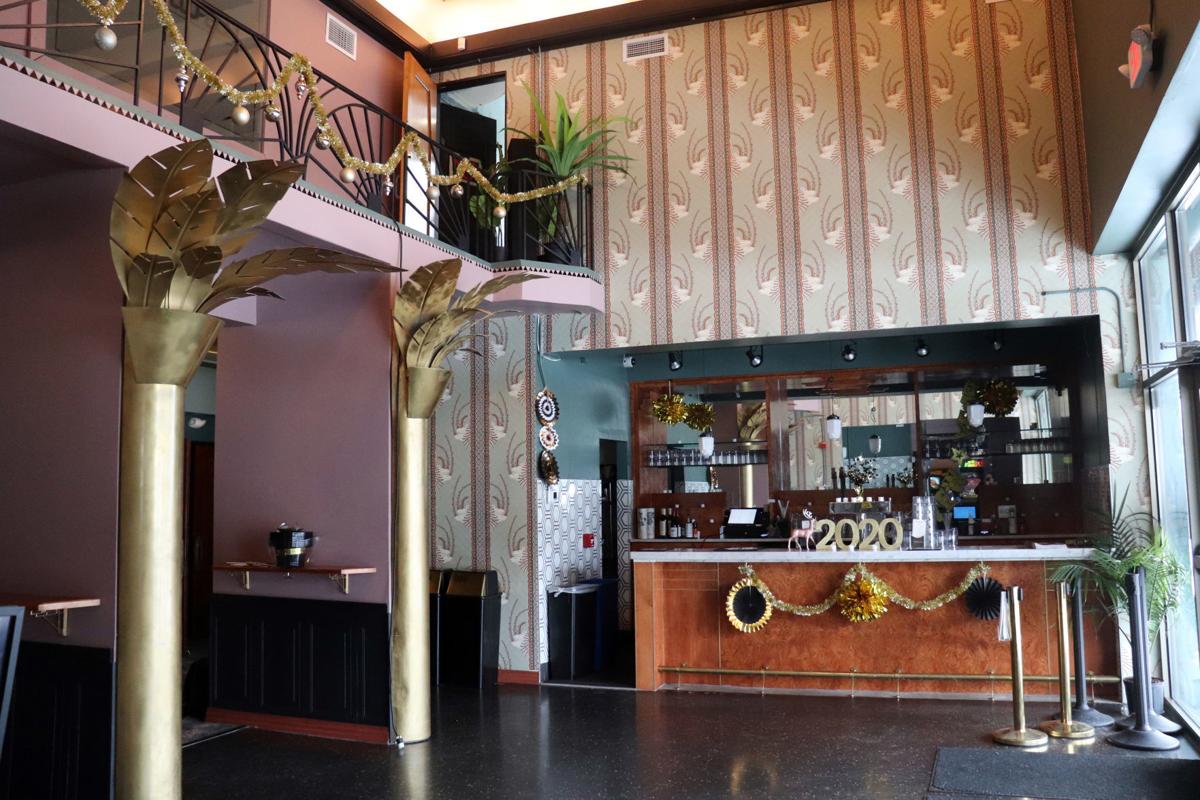 The Parkway Theater was remodeled to maintain its original “art deco DNA.” 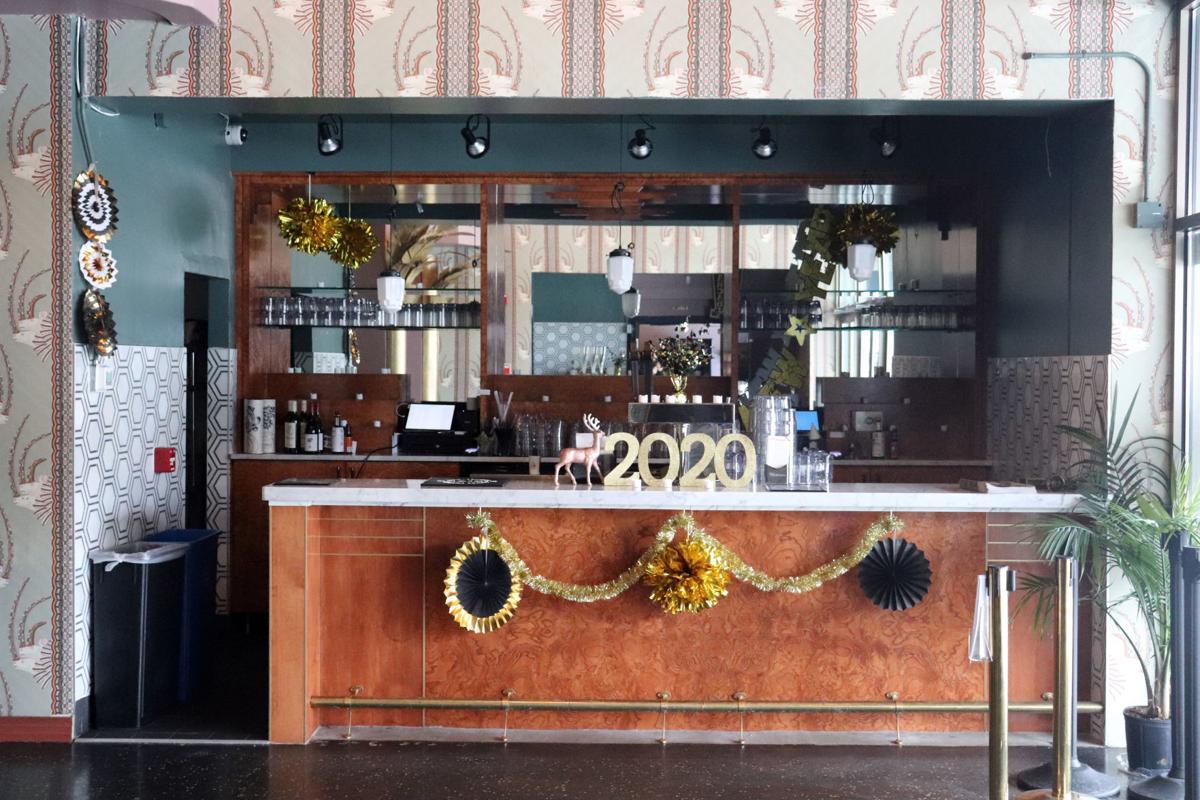 The Parkway Theater bar, adorned with decorations for their New Year Bash. 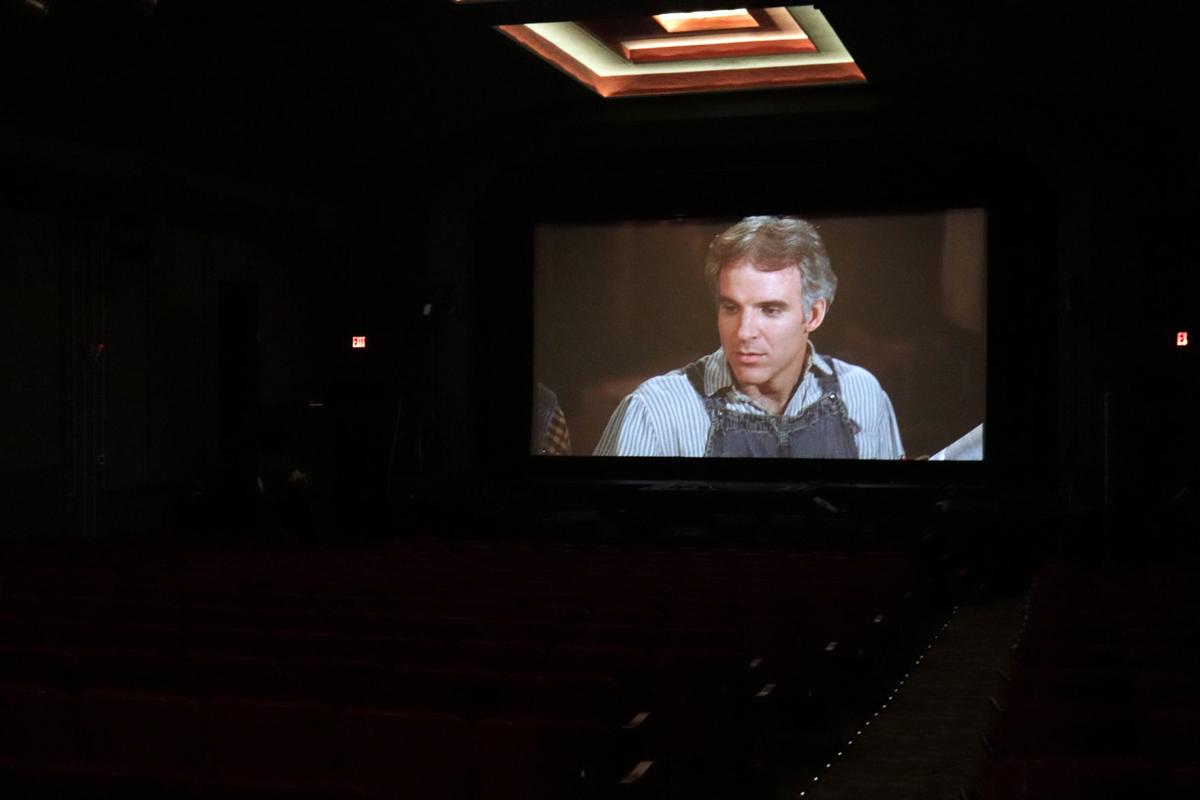 The Parkway’s programming focuses on beloved movies, like the 1979 Steve Martin comedy “The Jerk.”

The Parkway Theater features a full-service bar with signature cocktails and craft beer.

“Be Somebody!” — a daiquiri inspired by a classic Steve Martin scene, was featured during the Parkway’s screening of “The Jerk.”

Guests line up for craft cocktails and beer before a screening at the Parkway.

The Parkway Theater bar, adorned with decorations for their New Year Bash.

The Parkway’s programming focuses on beloved movies, like the 1979 Steve Martin comedy “The Jerk.”

A gem of old Minneapolis is shining brighter than ever. Owners Ward Johnson and Edward Landenberger have breathed new life into the 89-year-old Parkway Theater, which now presents classic movies, intimate concerts and live events.

Johnson and Landenberger took over the struggling single-screen cinema in 2018 and remodeled the theater, bringing the technology and amenities up to date while retaining the theater’s original 1930s charm.

“It was in pretty rough shape, we completely gutted the entire theater,” Landenberger said. “We looked at what was existing and decided to keep some of the character and we did a rehab to honor some of the art deco DNA.”

The 350-seat theater now include a stage for live events, a classic video game arcade and a full-service bar. The theater, like the nostalgic motion pictures they project, is a comfortable mix of modern convenience and old school charm. During a show, guests sit in the theater’s original seats, re-arranged to offer more leg room.

“We had them all sandblasted and reupholstered to preserve the worn-in beauty,” Landenberger said. “It’s much more comfortable and it gives people the flexibility to go out and grab a drink.”

Every Thursday the theater screens a classic feature that is accompanied by a signature cocktail, specially crafted by the in-house mixologist to reflect the movie being shown.

But the themed experience goes beyond drinks. The owners try to include pre-show entertainment that compliments every Thursday night feature. Upcoming pre-shows includes a David Bowie musical tribute before “The Man Who Fell from Earth,” a live rock ‘n roll set before “Dazed and Confused” and a boxing clinic before a screening of “Rocky.”

“We always try to do something fun that ties into our Thursday movies,” Johnson said. “We always do a special cocktail and sometimes the bartenders and staff will dress up and do something special for the movie.”

Due to the theater’s considerable size, Parkway programming caters more to event pictures, including nostalgic blockbusters and cult classics.

“We turn these into events so it’s not just a movie,” Landenberger said. “We presented ‘Halloween’ and there is a guy who has the most exact replica (costume) of Michael Myers and he dresses up and terrorizes people — they just have a total hoot when he’s here. He’ll come in and just quietly sit in the theater and people turn around and see him and have a chuckle.”

The “event” experience creeps into the actual movie screenings too. During a recent showing of “Die Hard,” guests were given party poppers to use during a climactic explosion; a 1980s TV, broadcasting static and accompanied by a girl in pajamas, was set up in the lobby before a showing of “Poltergeist;” and an Instagramable congregation of stormtroopers, Jedi and familiar faces from a galaxy “far far away” showed up outside the Parkway during their “Star Wars” programming this summer.

“It has a little bit of a ‘Rocky Horror Picture Show’ vibe to it. The audience is usually really into it and they’re clapping, laughing and maybe yelling out some lines to the movie,” Johnson said. “We’re shooting for that nostalgic experience so that you feel like you did when you saw the movie as a kid, or that you’re sharing a movie with a bunch of like-minded people who love the movie.”

“All this stuff you can stream, so it’s about more than just that,” Landenberger said. “It’s about being in a place where people can experience it with other people and have that group enjoyment.”

In addition to showing audience favorites on Thursdays, the Parkway screens more family-friendly pictures on Saturday afternoons. On Friday and Saturday evenings, the theater is booked with live events that range from musical performances to album releases, live podcast recordings, book tours and one-person shows.

Johnson said breaking into the Twin Cities’ robust music venue circuit can be very difficult, but he thinks the Parkway’s intimate setting and top-notch acoustics carve out a unique niche for the theater.

“I can go see a live show at another venue and it’s really fun and everyone is dancing, but at the Parkway the music is really front and center. You can hear every instrument, you can hear every vocal part, you have your own comfortable seat and you also have very good sight lines,” Johnson said.

Some events make the best of both worlds; The Hamiltunes is a program that screens the Broadway musical Hamilton while a cast of live singers leads the audience in a sing-a-long. The theater has also hosted sing-a-long screenings for classic musicals like “Grease” and “The Sound of Music.”

Other upcoming live events include musical tributes to Queen, Tom Petty, Patsy Cline and Neil Diamond. The theater has expanded to include midnight showings for cult movies and in February, cult film director John Waters (“Hairspray”) will perform a one-man show at the Parkway.

The Parkway also hosts an increasingly popular monthly program called Scream it Off Screen, where local filmmakers submit short films to be screened and the audience decides whether or not to keep watching each film.

“They start playing them and basically if they’re horrible people boo it off the stage and you go to the next one,” Landenberger said.

Looking to the future, Johnson and Landenberger hope to expand their live programming to include more national acts while finding exciting and unique ways to improve the “event cinema” experience.

“We’re more excited than ever now to keep growing and try different things,” Landenberger said. “We’re really happy with how things have turned out. We’ve definitely been able to connect and find our audience.”

“People always clap at the end of the movie — that’s always a good sign for us that we’re doing things right,” Johnson said.

For more information on the Parkway Theater’s programming, visit www.theparkwaytheater.com.