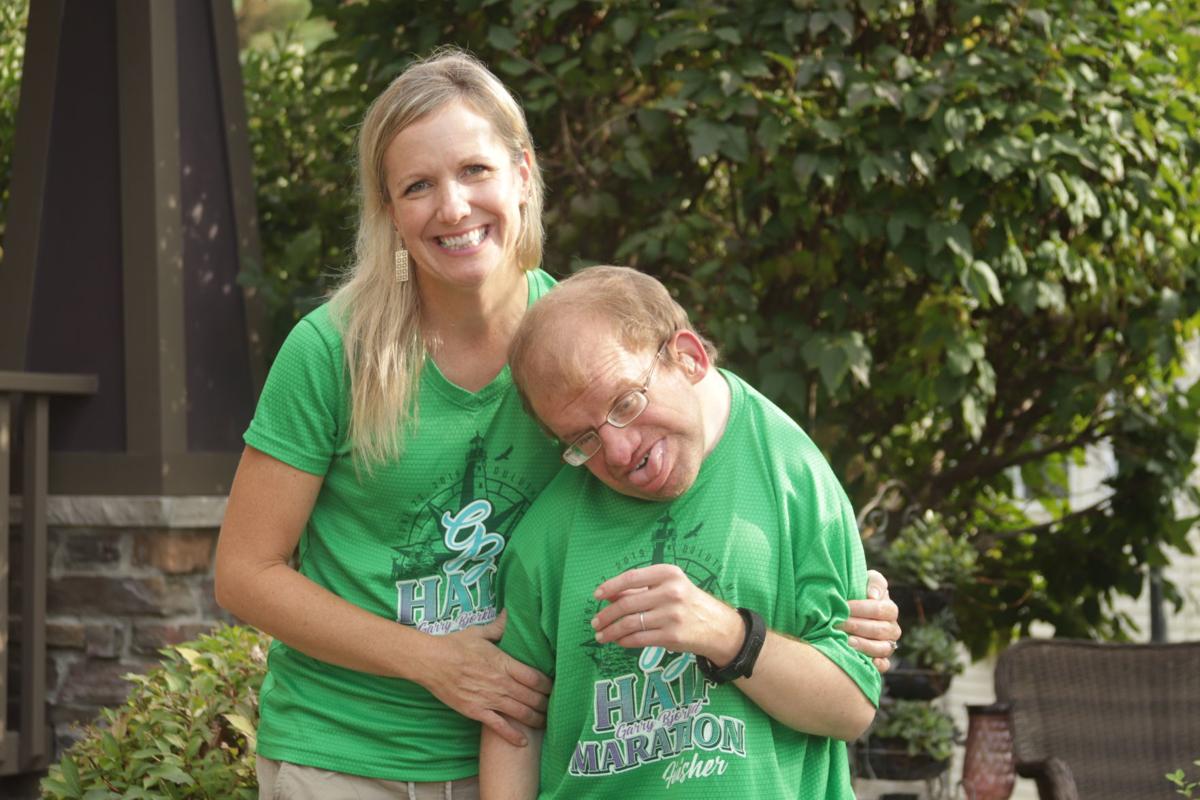 Jordan siblings Sunny Klein and Joe Sommers will be among the first group of duo teams to participate in the New York City Marathon on Nov. 3. 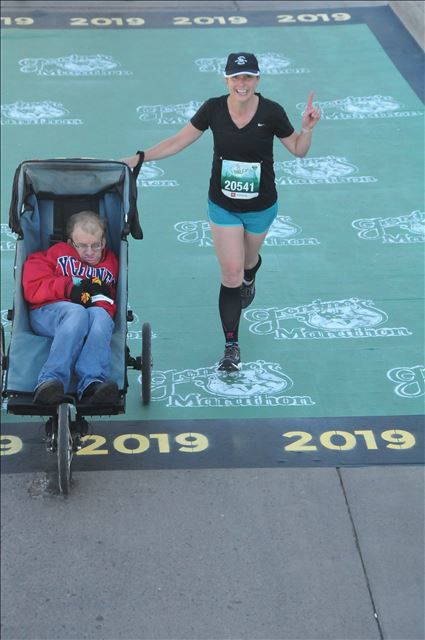 Sunny and Joe cross the finish line at the Garry Bjorklund Half Marathon in Duluth this year. They were the first duo to compete in the race. 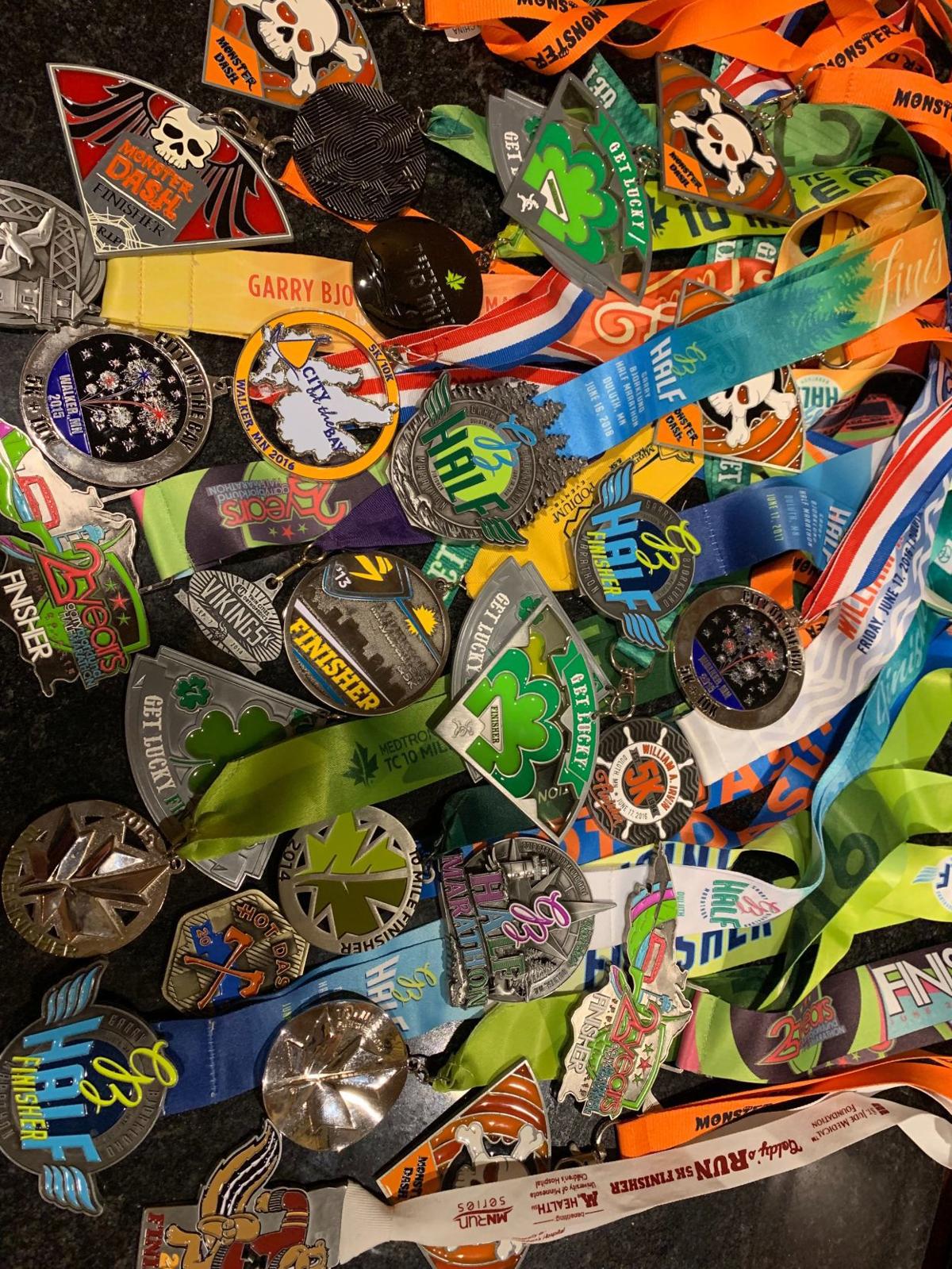 The pile of medals Klein and Sommers have earned by competing in races over the years. 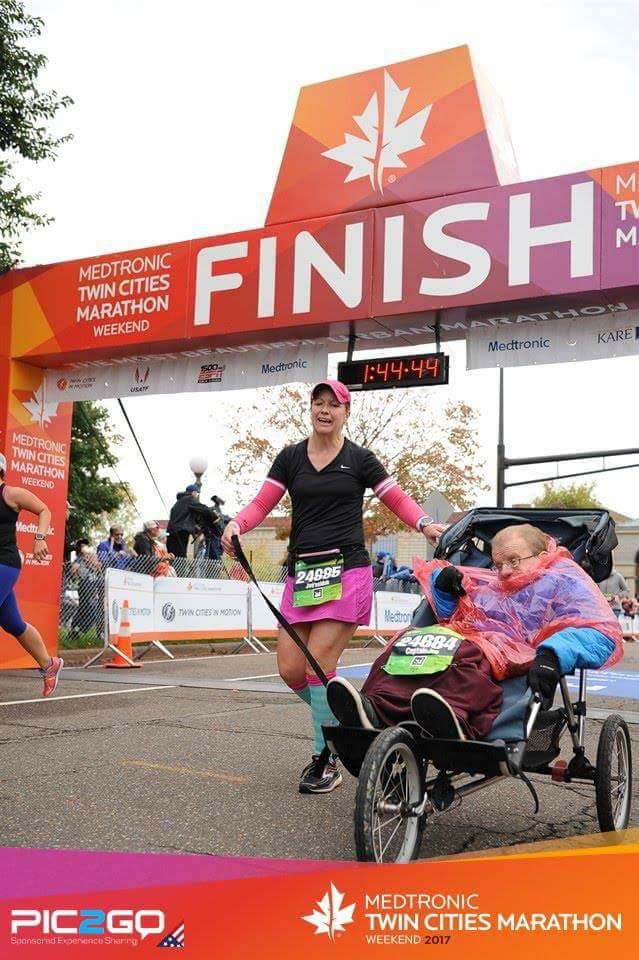 Sunny and Joe were the first duo to compete in the Twin Cities Ten Mile race in St. Paul. 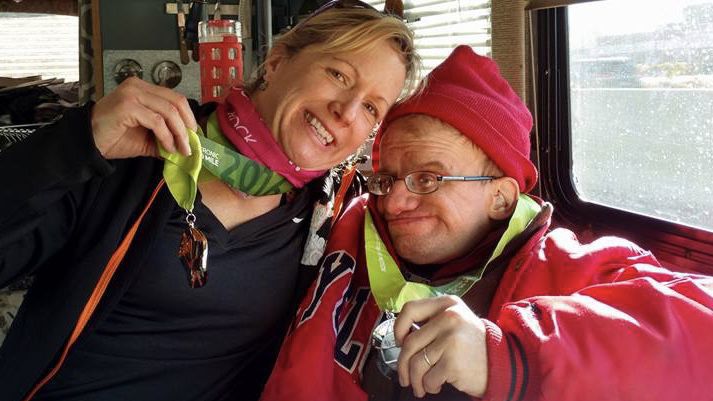 Klein and Sommers hold up their medals after a race.

Jordan siblings Sunny Klein and Joe Sommers will be among the first group of duo teams to participate in the New York City Marathon on Nov. 3.

Sunny and Joe cross the finish line at the Garry Bjorklund Half Marathon in Duluth this year. They were the first duo to compete in the race.

The pile of medals Klein and Sommers have earned by competing in races over the years.

Sunny and Joe were the first duo to compete in the Twin Cities Ten Mile race in St. Paul.

Klein and Sommers hold up their medals after a race.

The first marathon, as legend has it, was run more than two millennia ago by a messenger named Philippides between the Greek cities of Marathon and Athens. Much has changed since 490 B.C., but the grit, dedication and shear willpower it takes to complete a 26-mile jaunt remains the same.

Today, annual marathons continue to attract the most stalwart runners in the world, but technology and community support has allowed individuals like Joe Sommers, of Jordan, to finally participate. Sommers was born with a chromosomal abnormality, limiting his movement and cognitive abilities, but that hasn’t stopped him from completing countless 5Ks, 10Ks and a couple half-marathons alongside his sister, Sunny Klein.

In November, the siblings will take their racing to the next level by participating in their first marathon. In preparation, Klein has scaled their runs up to 22 miles and Sommers is receiving a new, top of the line racing wheelchair. The nerves, anticipation and preparation is partially because they won’t be making their debut at just any marathon — they’ll be running in the world’s largest: the New York City Marathon.

On top of that, it will also mark a first for the New York Marathon. The 2019 race, with the inclusion of Klein and Sommers and several other pairings, will be the first race to feature duo teams in the marathon’s 49 year history.

“Its crazy to me that it’s the year 2019 and this is the first year the biggest marathons in the world, New York and Boston, have let in duo teams,” Klein said. “It seems a little silly that we’re still fighting for the rights of people with disabilities, you’d think we’re beyond that.”

Klein and Sommers have been fighting for inclusion since they began running together in 2006. Klein was looking to get back into shape after having her first child and, inspired by jogger strollers for her newborn, she took Sommers along in an all-terrain jogger wheelchair.

“We just kind of took off together. He loved it and felt really free being able to do it,” Klein said. “I never thought he’d take to it like he does.”

Since then they’ve competed regularly in 5K and 10K races. They’ve also fought personal barriers by challenging race organizers to allow disabled duos to compete. Four years ago, they were the first duo team to compete in the Twin Cities Ten Mile.

“They were pretty intimidated to let a duo team in, so we were the guinea pigs and from that day forward now they let duo teams in,” Klein said.

This weekend will mark the fourth consecutive year they’ve participated in the TCTM. In those years, Klein said, the number of duo teams they’ve seen competing has grown considerably.

One year after they got into the TCTM, they became the first duo team to participate in the Garry Bjorklund Half Marathon (Grandma’s Marathon) in Duluth. The half marathon tacked three more miles onto Klein and Sommers’s longest runs, and for Klein — who’s pushing about one-and-a-half times her body weight — every additional mile can be a race of its own.

“It was a really scary step,” she said. “It felt good, it’s crazy how many people turn out in that town to cheer you on. It’s pretty awesome and you feed off the adrenaline of the crowd, especially when they see (Sommers) — they get excited. And you can’t not have a good time pushing him because he’s hi-fiving everyone and people are cheering him on. He inspires people out there.”

Klein is hoping Sommers’s joy and enthusiasm will inspire runners in New York City, as they as they jog through all five boroughs this November for the annual marathon. Klein first got word of the decision to include duo teams in February. The marathon was only include a select number of duo teams, so Klein was encouraged to send an application, sharing her and Sommers’s story.

She suspects they chose to include her and Sommers due to their bond and their history of being trailblazers in Minnesota’s duo running scene. One of their primary concerns, however, was Sommers’s chair, which had fallen into disrepair. New jogging chairs, even budget models, can be expensive. But Klein’s husband insisted they take a new chair to New York.

“He said the old one couldn’t make it that far,” Klein said.

A few friends Klein and Sommers attended Prior Lake High School with heard about their need for a new chair and started a GoFundMe page to ensure the siblings could participate in the marathon. The page attracted the attention of Beth Boyden, another Prior Lake alumna, who became the largest contributor for the chair. Beth was inspired by Klein and Sommers’ story and felt it aligned with the values of her business, Navigate HR.

“Klein is super humble and such a good person,” Boyden said. “She doesn’t know how to not do good. When I look at her and her family and how she lives her life, it’s inspiring. It truly is.”

All of the donors, with their names emblazoned on the wheelchair, will cross the finish line with Klein and Sommers on Nov. 3. In the weeks leading up to the race, Klein and Sommers have been running their regular routes along Jordan roads and trails (in the winter they run inside the CERC).

“People have gotten to recognize our route and now they wave to us,” she said.

They recently completed their first 20-mile run and plan to tackle a 22-mile run next week before they to taper down to shorter distances in the lead-up to the marathon. Klein said the longer rides have allowed the two to spend more time together and become closer.

“I feel more bonded with him, because it’s something only him and I are sharing — especially after our 20-miler last week.”

The running isn’t all hard work, though. Klein said they listen to 1980s favorites like Journey and bring snacks for the longer runs. Considering the memories they’ve already created along the way, Klein anticipates New York is going to be something very special.

“That’s why I’m excited,” she said. “We’re always going to have this day in New York, doing the world’s largest marathon, seeing all the city and creating moments only him and I will have to share.”

"He inspires people out there."