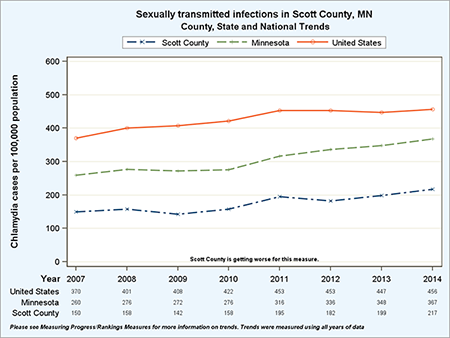 According to County Health Rankings, Scott County has a lower rate of sexually transmitted infections than the rest of the state. However, the rate has been increasing steadily over the past decade. 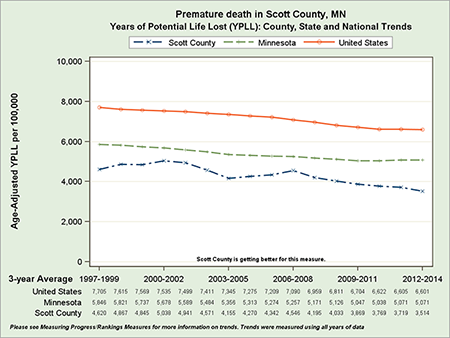 Scott County was ranked second in the state for overall health outcomes this year, only edged out of the top spot by its Carver County neighbor.

A small percentage of residents with "poor or fair" health, low number of physical and mental sick days and low premature death numbers contributed to a high spot on the County Health Rankings report. The report created by the Robert Wood Johnson Foundation and University of Wisconsin spotlights factors that influence community health.

Compared to the Minnesota county average of 5,100, Scott County only saw 3,500 years of potential life lost to death before age 75. Cancer caused close to half of the premature deaths in the county.

The county was also ranked fourth in health factors, which includes 30 measurements like socioeconomic factors, the physical environment and clinical care access.

Rates for smoking, physical inactivity and teenage births were consistently under the state average. However, while sexually transmitted infections are also lower than average, the number diagnosed in the county have increased over the years. Scott County residents also drink excessively at a higher rate.

The last time Scott County was one of the top five counties in Minnesota was in 2013. Since dropping to the 11th spot in 2014, the county has slowly worked its way up each year.

See the reports for Minnesota counties, and other states, here.