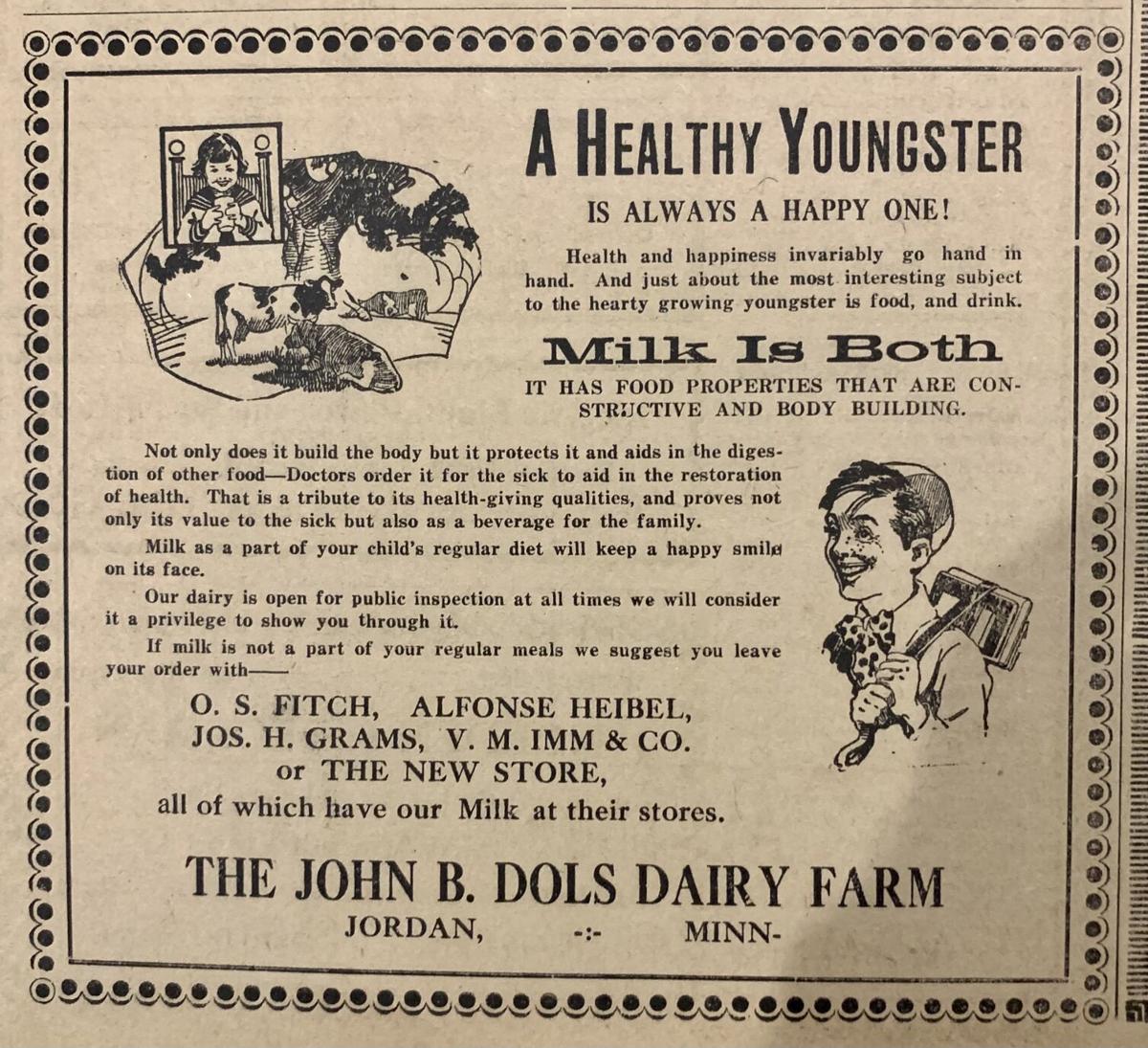 A 1921 advertisement for milk preaches its healthful effects on young people. 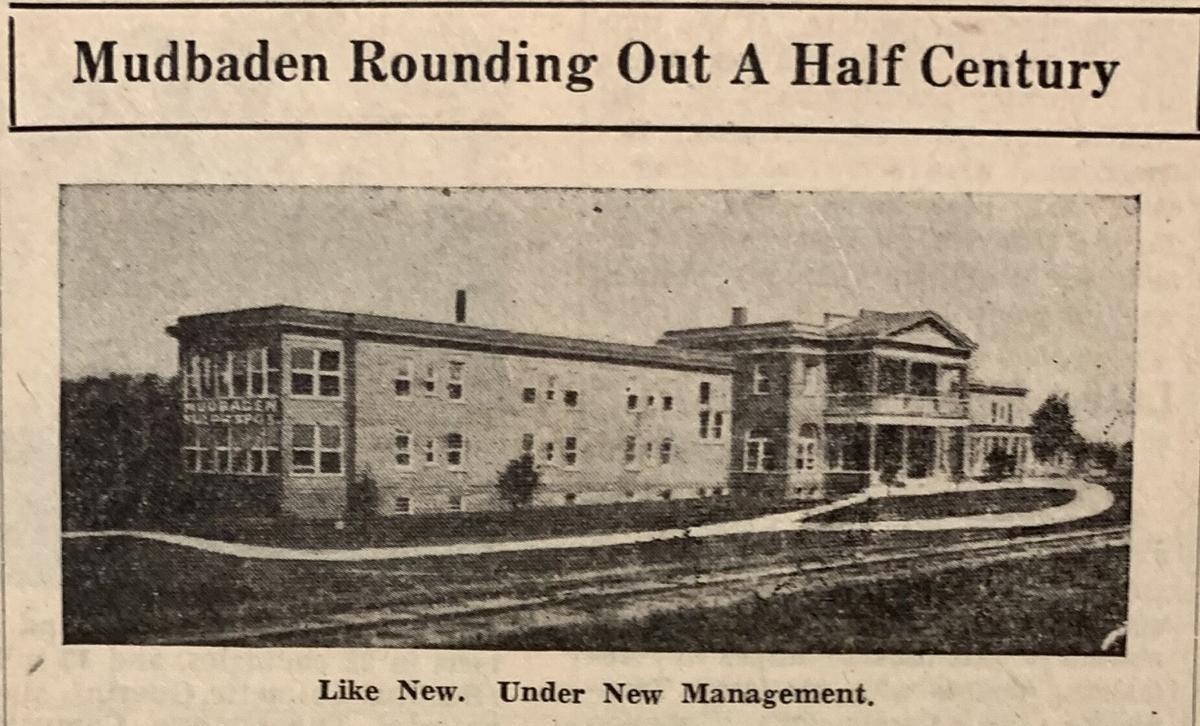 A 1921 advertisement for milk preaches its healthful effects on young people.

Jordan Lumber Company has window sash and door, lumber, lock, shingles — all kinds of building materials. Their office is near Nicolin’s Elevator.

Hunters report that quail are quite numerous.

Saloon keeper Schaumber’s family arrived this week to make their future home with us.

The High School Athletic Association is preparing to learn football, but probably it is just as well, for were they prevented from playing football they would find some other way of wearying themselves and breaking their necks.

Landlord Roufs has the Central Hotel all refitted and refurnished and is now ready to receive and accommodate the traveling public. He will open a saloon in the bar room after the 22nd.

Christ Hoffman purchased the Rouf place on Mill Street for $750 and will remodel the building into a spacious home.

Machinist and manufacturer Rick is adding a two-story addition to his wagon shop extending into the alley.

The Mill Company has an elegant new office on the first floor of the mill. Miss Nellie Strait is cashier and chief assistant to Mr. Allen.

The creamery is operating three days a week at present — Monday, Wednesday, Friday.

Thomas Haas will have an auction at his farm 2.5 miles west of Jordan on the Belle Plaine Road of all his livestock, grain and implements on Oct. 17.

The soaking rain Sunday night followed by cool and clear weather is a boon to farmers. It revives fall pastures and elegant conditions for plowing.

The cigar factories have been idle this week on account of the damp weather making stock too damp to work.

On Oct. 3 there was a light frost that was followed on the fourth by a real killing frost, an ice maker one!

Contractor Cox and his crew are busy working and grading the Midland Scott County Road to Prior Lake village before heavy freezing sets in.

Plain Machine and Hand Sewing is being taught by Mrs. Charles Ransom, telephone 84-2.

The former Lutheran Parsonage in Jordan is for rent after Nov. 1. Inquire at Conrod Hennes in Jordan.

NOTICE — the city water supply is to be cut off between the hours of 7 a.m. to 6 p.m. Saturday in order to clean out the reservoir and flood the system of water mains. Be careful of fire always, but especially careful on that day. By order of City Council.

A new culvert is to be put in and the crossing graded up at the washed out section of the road near Mike Schuster’s place in Southtown.

F.H. Meyer and family have moved into their new bungalow home on Syndicate Street after leaving their farm near New Prague.

A car load of potatoes has arrived here and will be for sale.

Our stock of EDISON RECORDS is very large and have the latest songs, newest dance music and all the old time popular pieces from $1.35 to $1.85 each. — C.H. Casey.

Mudbaden is rounding out a half-century. People of Jordan and the vicinities are most fortunate to have Mudbaden Health Sanitorium in their locale. Thousands of people have traveled from many state and Canada for treatments to relieve their aches and pains from rheumatoid arthritis, neuritis, sciatica and lumbago. Testimonials are numerous.

Jerry and Paul Sunder went duck hunting and found a grey fox that had attempted to jump a fence and landed on an electric fence caught in his mouth. The fox’s mouth was burned through and the back legs caught on the first fence.

The Jordan Firemen hosted the Belle Plaine, Shakopee and New Prague men at a party in appreciating their help at the Jordan Feed Mill warehouse fire. The evening was spent playing cards and having a hot beef lunch.

During the past week the handsome station on the Omaha Railroad fronting Mudbaden was taken down very carefully, piece by piece, for the excellent lumber it contained. The lumber was taken away to be used in other structures. Train passengers can still arrive and leave from the Health Resort, but the station was no longer needed.

The “M-Club” will hold a bake sale at Strait’s Store on Saturday.

The Junior Class has selected the cast for their play “Finders Keepers” to be presented in November.

A considerable crew of 15 highway workers and trucks and a scoop have been getting sediment out of ditches along Hwy. 169 north and south.

The word Pontiac means a thoroughly good car — a beautiful car — a car with a reputation of years of driving service. Come in and get our deal — Val R. Reudiger, proprietor.

The first mobile home manufactured in the new Wickes Homes plant here in Jordan was shipped to his owner last week. The Wickes plant opened in August and plans to produce about three 14x70-foot units per week. About 50 persons are employed.

Marilyn Hennen, daughter of Mr. and Mrs. Willard Hennen, was crowned Homecoming Queen of 1971 at the Homecoming ceremonies held at the Jordan High School last weekend.

Mrs. Theresa Holzer, age 100, born in Germany and longtime resident of Jordan, passed away at the LeCenter Nursing Home Oct. 12. Funeral services will be held at St. Benedict, Friday at 10 a.m.

Jordan High School’s ecology class is new this year and with it comes some new ideas. Twenty-five students make up the class, directed by Mr. Weber. Some of the projects have been clean-up land behind the cemetery and partial clean-up of some of the ditches along Hwy. 169.

The largest fish ever taken by angling in Minnesota was a 236 pound sturgeon caught in Lake of the Woods in 1911.

In 1971, the Central Telephone System installs its one millionth company-owned telephone.

The fired-up Jordan Hubmen, looking for their first victory of the season, were upset but the Norwood’s Indians Friday night when Norwood’s halfback rolled 62 yards off left tackle for a touchdown and kicked the extra point for a 7 to 6 lead that held up to the end of the game.

The 1991 Jordan High School Homecoming Queen and King were crowned in a crowning ceremony on Monday night at the high school. Crowned were Queen Christina Baldwin, daughter of Herb and Fern Baldwin; and as King, Jason Haus, son of Cheryl Haus.

One of the employees of Engineering America, Inc., which constructed the new Jordan tower on the hill to the southeast of the city limits, was Dan Belden, son of Cal and Lois (Livgard) Belden, and grandson of the late barber, George and wife Mildren Belden.

Something wonderful took place at St. John the Baptist Catholic Church last Sunday morning. Instead of having three separate masses, our congregation celebrated at one; at 10 a.m., a “unity mass.” This special occasion and mass was celebrated by Bishop Welch (head of our vicar), Fr. Brennan and Fr. Val and approximately 500 parishioners. The church music was enhanced by the music from all three of their choirs. Children had been asked to stand up around the altar area as church was packed. A wonderful way to celebrate an example of a “church that prays together, stays together.”

In another exciting Minnesota River Conference battle, the Jordan Hubmen beat the Belle Plaine Tigers 22-13 Friday night at Belle Plaine. The victory by Jordan throws the MRC title race into a three-way tie with Jordan, Sibley East, and LeSueur-Henderson all at 4-1. Both of Jordan’s backs had great games. Klehr piled up a career-high 186 yards in 29 carries and Stier grinded out 97 yards in 23 attempts.

Looking Back is compiled by the Jordan Historical Society. For more information, email jhcsecretary@gmail.com.