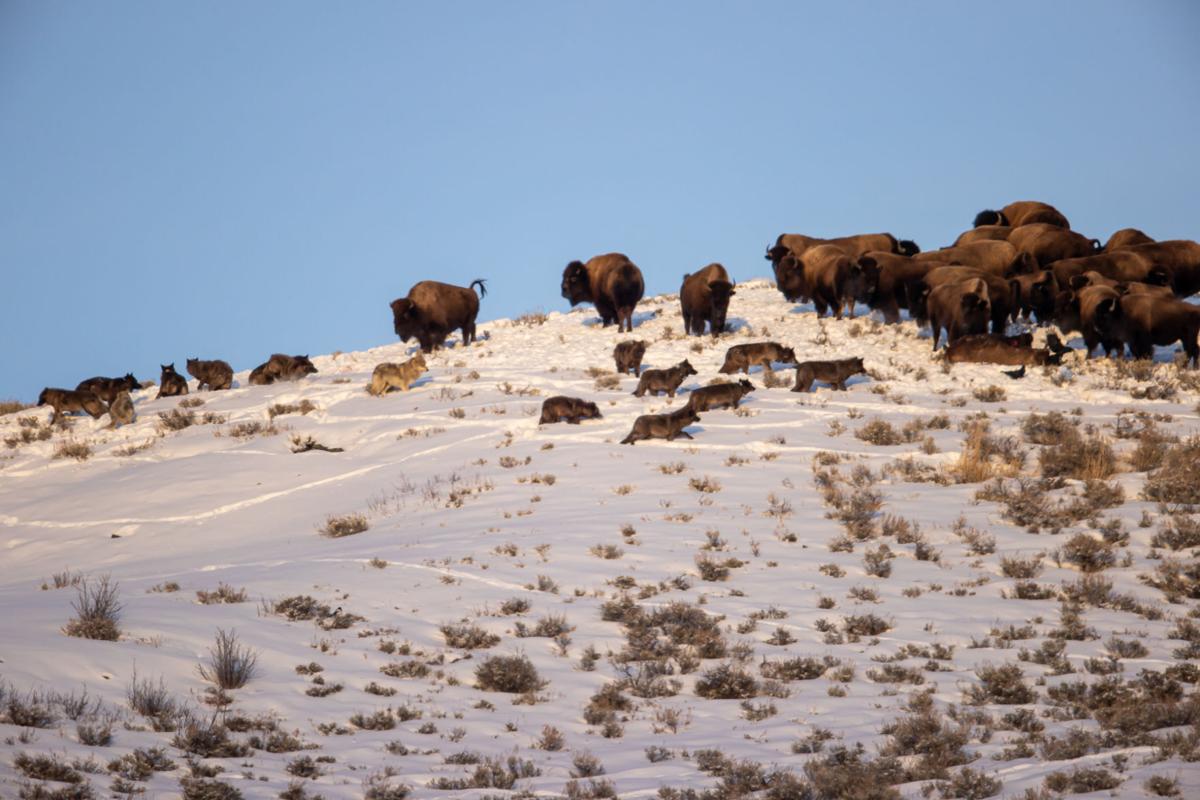 It takes at least 13 members of a wolf pack to take down a single bison.

The bison turned quickly, ready to charge. The two feet of snow didn’t slow its powerful hooves, but rather kicked up a rooster-tail of shiny ice crystals into the cold winter air, highlighting the bison’s efforts.

What was surprising was how quickly the pack of wolves turned around to evade the largest land mammal in North America that was now coming after them.

This natural “dance” went on for just about an hour. The wolves would press the herd of bison and when the bison had enough, they would turn and charge after the wolves. Each time the wolves spun around and retreated because they knew the bison where nearly 10 times their size and could easily kill them with one kick from their powerful hooves.

This was the scene on my recent excursion into Yellowstone this winter. I had located a herd of bison high up on a mountain ridge. This alone is nothing unusual, but the stand-off between the bison and the wolves was.

Moments before I arrived, one of the adult bison suddenly dropped over dead. Its lifeless body lay in the deep snow. The herd of over 50 bison stood around their fallen herd member. It is hard to know what was going on in their heads, but it looked like they were trying to encourage the dead bison to get up. Several of the herd would gently nudge the lifeless body. Others would put their muzzle in the fur of their fallen friend and sniff.

One thing was for sure, the members of the wolf pack wanted at the carcass, and the bison where not having any of it. By my count there were 17 wolves, most with black fur and just a few gray ones. The wolves would advance to see if they could push the herd and encourage them to move on. Just when the bison started to move, several bison would turn and chase the wolves, pushing them back.

A flood of thoughts were racing through my head such as, how interesting that most of the wolves had dark or black fur. In other parts of the world, wolves are gray in color. After all, that’s why their official name is “gray wolf.” The black pelage (fur) of these wolves is fairly unique to North America, and Yellowstone in particular.

I was also thinking about the relationship between wolves and bison. Most wolf packs are not good enough to actually kill large animals like bison. I had recently read a published study that took place in Yellowstone that pointed out that wolves required at least 13 members to take down a single bison but then only if the pack was highly organized, had experience with killing bison and could cooperate at an extraordinary high level. Even then they only are able to take the weak, sick or injured bison.

I was thinking about how difficult the harsh winter conditions can be on these animals. So much so that apparently this adult bison dropped over dead in the snow. Which led me to think about how fortunate these wolves will be if they can get to the carcass.

While my mind was racing through all of this biological information, about half of the herd of bison started to wander off and move down the ridge line. The bison who were still engaged with the dead comrade and who were chasing off the wolves stayed.

I was able to capture some amazing video of the wolves advancing and then retreating with each turn of the herd. Black-billed magpies, a bird in the crow family, fluttered in and landed on the dead bison. The other bison did not seem to mind these scavengers advancing on their fallen friend.

Then the tide shifted and for some reason the bison started to move away, and the wolves started to chase them. The bison ran through the snow while the wolves chased them for about 50 yards before turning and heading back to the dead bison.

Most of the pack gathered around the carcass with their tails wagging and started to feed. A lucky break for the wolves in the dead of winter. The sun was setting, and the light drained from the mountain top.

In the morning I returned, just 12 hours later at first light, to find nothing remained of the carcass, no bones, no fur, just blood-stained snow. In nature, nothing goes to waste.