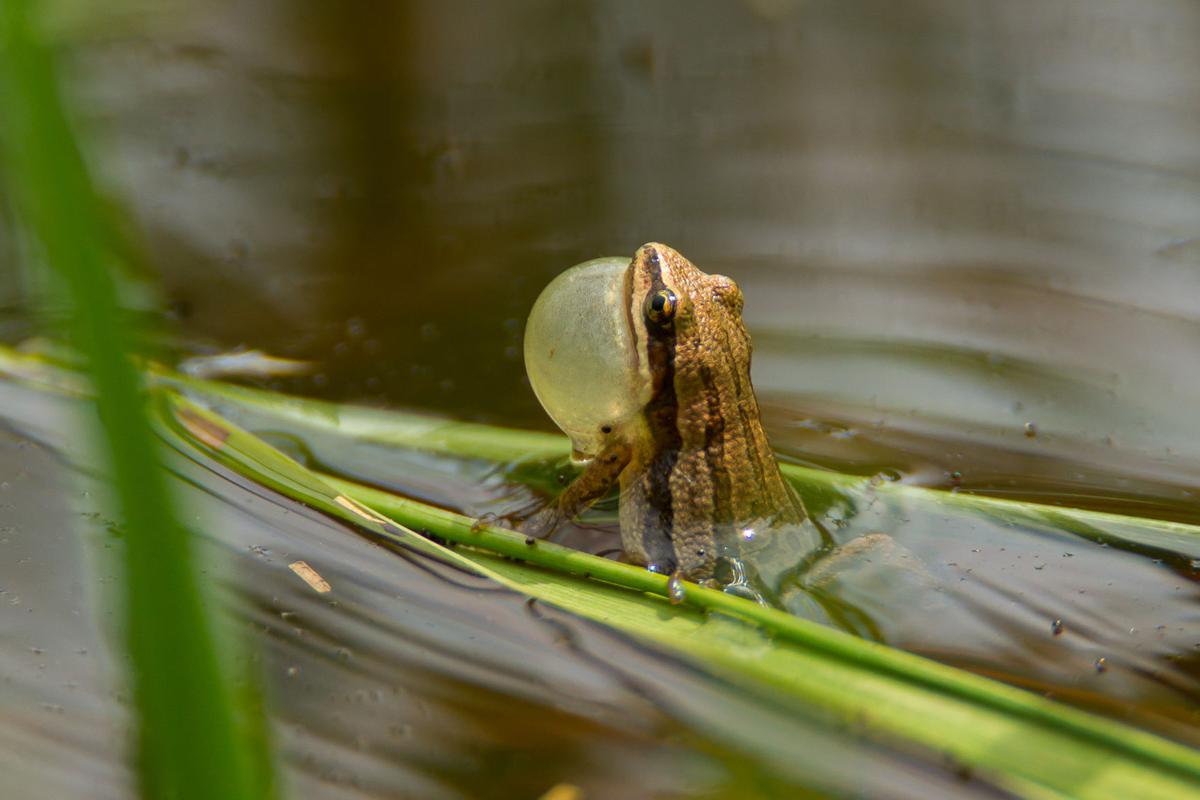 Like a well-rehearsed choir, male chorus frogs sing an ascending trill-like b-r-e-e-e, lasting only one to two seconds. The call is often compared to the sound made when you draw your thumb down the teeth of a stiff comb.

Spring is filled with so many cool and interesting natural things. The earth is awaking after a long and frozen sleep.

Each year I am surprised when I hear my first frogs calling. It always seems too early or far too cold for frogs to be active and yet there they are. When the snow melts and April showers fill small ponds, it produces the perfect conditions for the male chorus frog (Pseudacris triseriata) to gather and start calling to attract females for mating.

Western chorus frogs require temporary wetlands or shallow ponds without fish to breed. Hundreds of male chorus frogs pack into these small wetland depressions or ponds to sing their hearts out in order to attract a mate. Like a well-rehearsed choir, the males sing an ascending trill-like b-r-e-e-e, lasting only one to two seconds. The call is often compared to the sound made when you draw your thumb down the teeth of a stiff comb.

The chorus frog is small compared to other, better-known frogs such as leopard frogs or bull frogs. It is only three-quarters to one inch long when measured from the tip of its nose to end of its torso. Or about the size of your thumbnail. Females are slightly larger than the males. Both can be identified by a dark stripe that runs through the eye and a pronounced white line that extends along the upper lip. They also have three dark stripes running the length of their body, called longitudinal stripes.

While light brown is the most common color, they can be shades of green or red. The brown phase is predominant in warmer areas, while the reddish and greenish morphs are found in the forested, or cooler regions.

The chorus frog feeds on small prey items such as aquatic insects, but will take just about any other small terrestrial (land) insect they can catch, such as spiders and flies.

While breeding, the female attaches masses of eggs (25-75) to submerged vegetation. An individual female can lay several hundred eggs per season. The eggs hatch within 12-16 days depending upon the water temperature. The warmer the water, the faster the egg development. After hatching, the tadpoles transform into adult frogs in eight to 10 weeks.

The chorus frog is among the first of the frog species to emerge each spring. How these frogs survive winter in nothing short of a miracle. Most people think that frogs over-winter buried in the mud at the bottom of lakes and ponds. Research is now showing that this is not true for most frogs.

The chorus frog overwinters on land under rocks and logs, near the ponds they call home. Since they don’t dig down below the frost line, these tiny amphibians will partially freeze — something that until recently was thought to be impossible.

In fall, the overwintering frogs replace the water within each cell in their body with an antifreeze-like compound called glycol. While this reduces the temperature at which the cell will freeze, it doesn’t stop the cell from freezing. More importantly, the glycol doesn’t form pointed ice crystals that will puncture the cell wall like water will, thus allowing the cell to freeze but without damage to the cell.

In spring the process is reversed and the frog’s thaws and wakes up. Sounds like something right out of a sci-fi movie thriller.

So this spring when you are out for a walk be sure to listen for the chorus frog calling from your local pond.