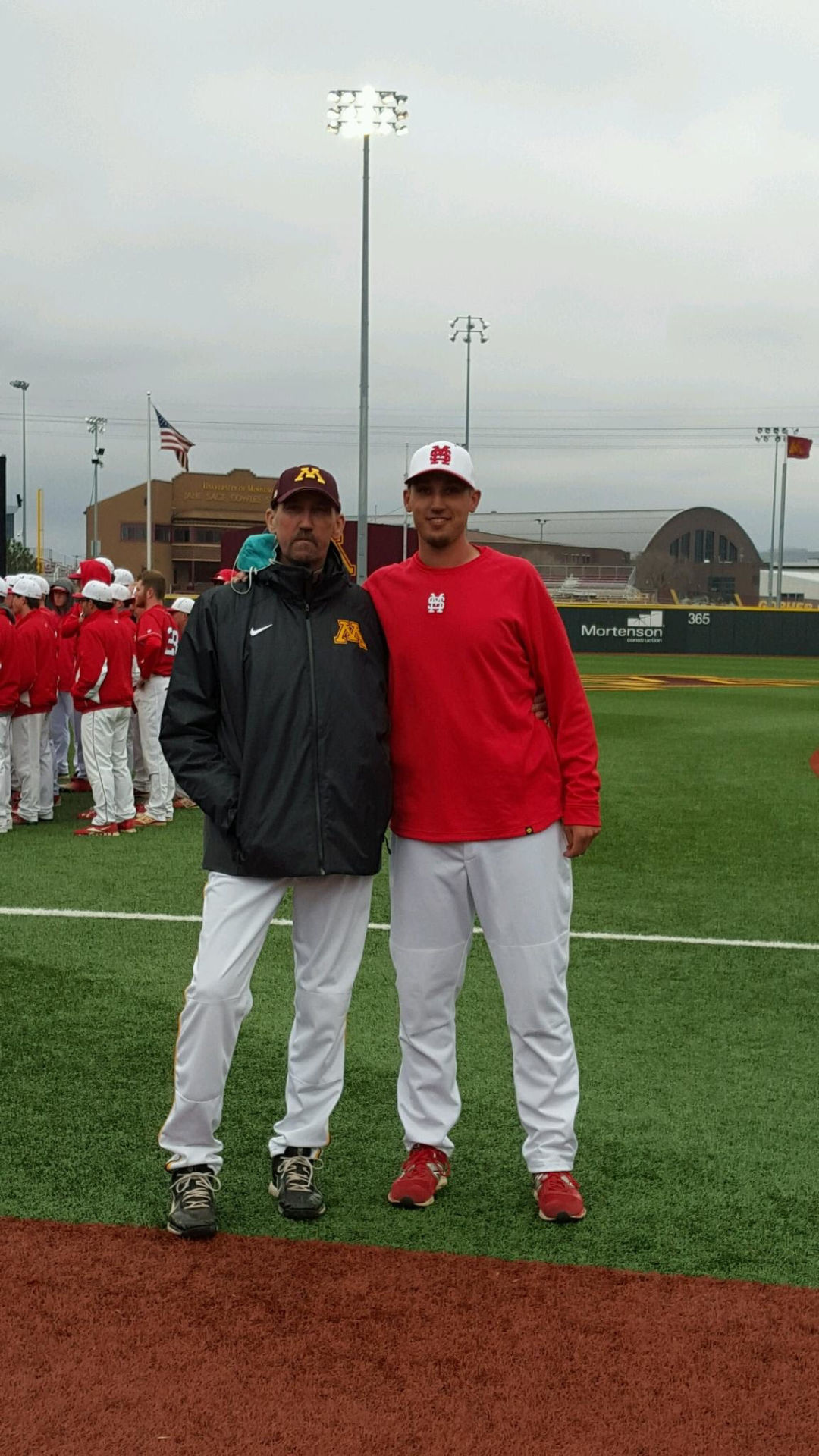 T.J. Oakes coached against his dad, Todd Oakes, in his first season as coach at St. Mary’s University. It was the second-to-last game that Todd Oakes coached before he passed away. 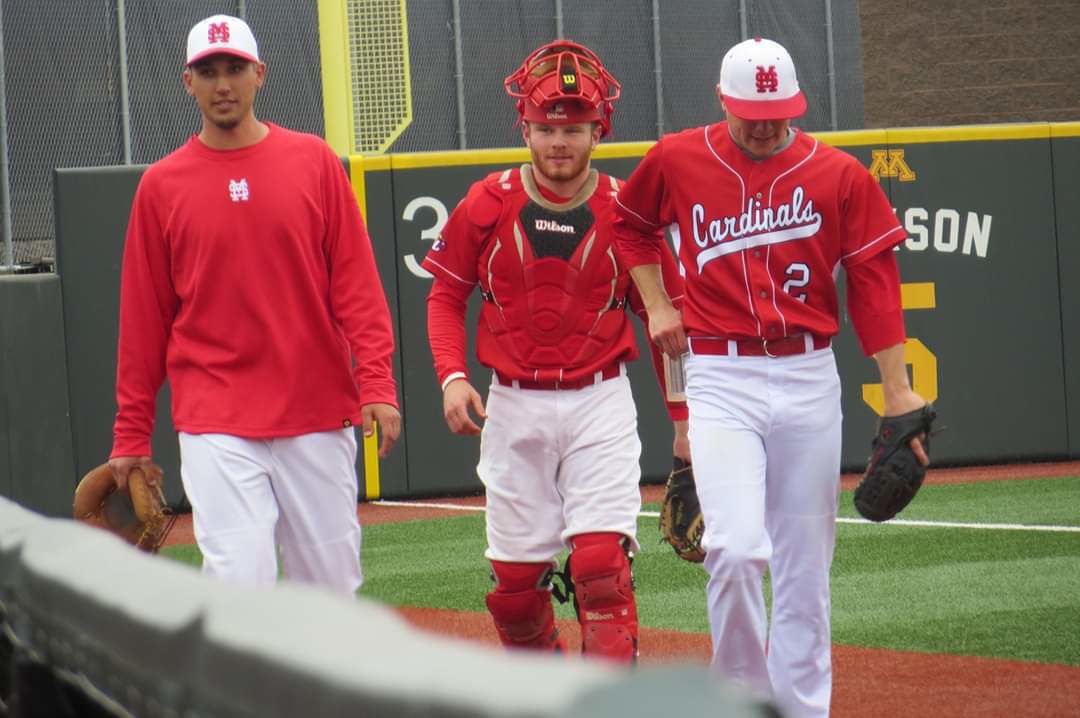 TJ Oakes (left) is in his fifth year as pitching coach for the St. Mary’s University baseball team. 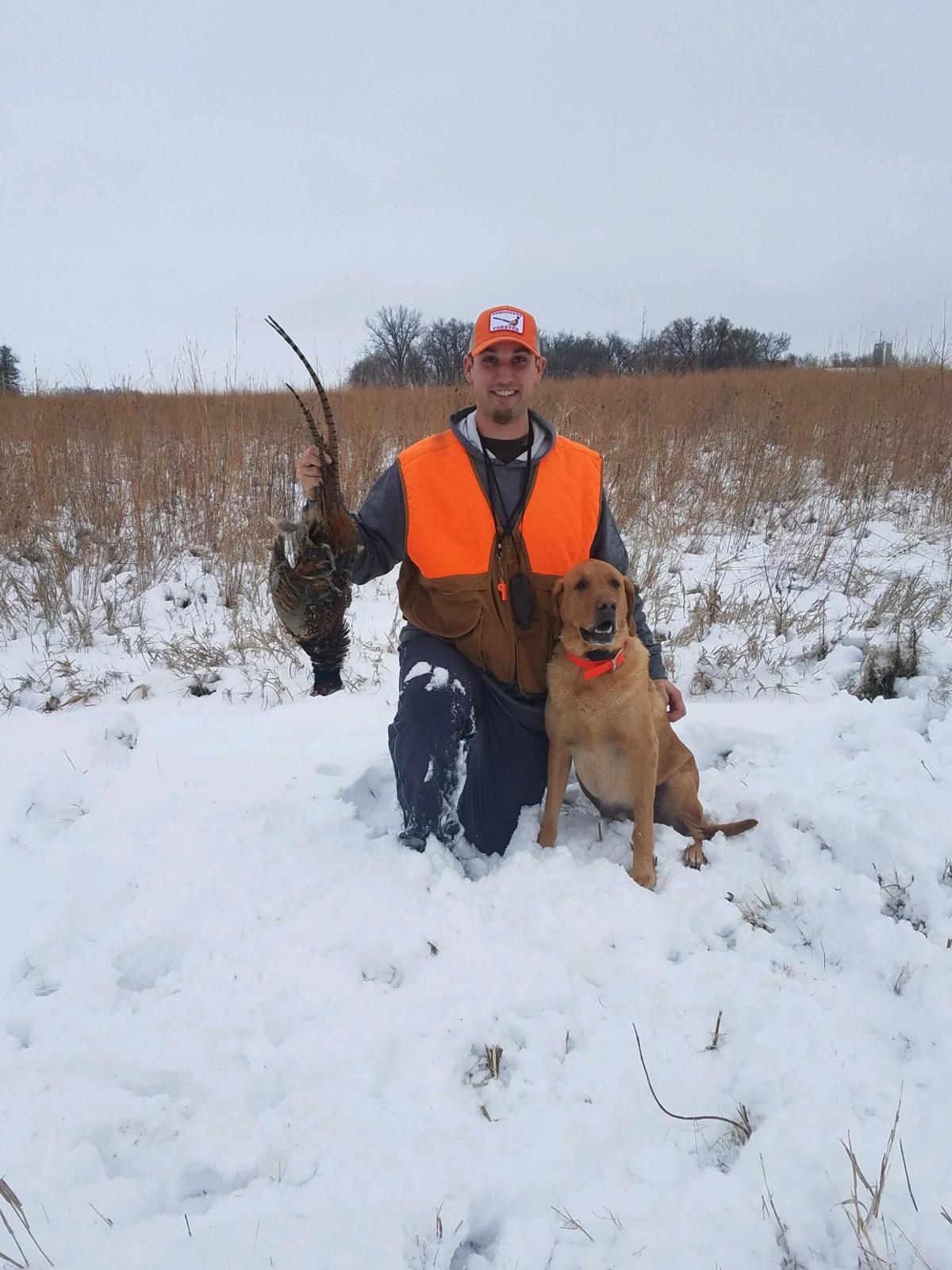 When he’s not coaching baseball, T.J. Oakes and his red lab dog Bernie like to get out and pheasant hunt.

T.J. Oakes coached against his dad, Todd Oakes, in his first season as coach at St. Mary’s University. It was the second-to-last game that Todd Oakes coached before he passed away.

TJ Oakes (left) is in his fifth year as pitching coach for the St. Mary’s University baseball team.

When he’s not coaching baseball, T.J. Oakes and his red lab dog Bernie like to get out and pheasant hunt.

Oakes, a 2009 Jordan High School graduate, starred for the Hubmen before moving onto the University of Minnesota from 2010 to 2012.

After three strong seasons pitching for the Gophers and his dad Todd (who was the Gophers pitching coach), Oakes was drafted by the Colorado Rockies in the 11th round of the 2012 Major League Baseball Entry Draft. (The Minnesota Twins drafted Oakes in 2011 in the 41st round but he returned to the Gophers.)

He turned professional on June 9, 2012 when he signed a contract with the Rockies.

"The whole process was not as easy as one would think," Oakes said. "There were multiple people telling me I was projected to go anywhere from rounds three to eight. When round eight passed and I still wasn't drafted, it was looking more like I would be going back to college for my senior year. But the Rockies came into the picture and used their 11th round pick on me and the rest is history. Draft day was very chaotic with a lot of phone calls from various MLB scouts. There is always a lot of negotiating and wheeling and dealing when it comes to the MLB draft. I remember being proud of the moment when I was drafted but at the same time relieved that the day was over."

After signing the professional contract, Oakes was assigned to Colorado's short season Single A affiliate, the Tri-City Dust Devils in Pasco, Washington.

Out of left field

"There were many pros and cons to the whole experience," Oakes said. "My situation was a little unique in the fact that I got a call that my dad was diagnosed with leukemia less than a week into my professional career. It's safe to say my mind wasn't always on baseball in my first year as a pro."

Despite the circumstances, Oakes had a good start to his pro career. He started 11 games for the Dust Devils, going 1-2 with an 4.41 earned run average.

"My father's diagnosis made my first year very difficult but I was very fortunate to be set up with a wonderful host family to live with who really helped me through the tough times," Oakes said. "They were a family away from home for me. Other than that, it was quite an adjustment period for me learning how to compete at that high of level and riding the highs and lows of pro ball."

In 2013, Oakes was at spring training in Scottsdale, Arizona and was assigned to Low A ball in Asheville, North Carolina for the season. There he started 25 games and finished with a 9-8 record which earned him a promotion to High A ball in Modesto, California where he was placed on the playoff roster.

"I really enjoyed spending the summer in Asheville and was yet again extremely fortunate to get set up with another outstanding host family who really took care of me," Oakes said "It wasn't a great start to that season for me but I figured things out and was way more consistent as the season went on."

After that season, Oakes called it a career and retired from playing baseball.

"There were a lot of factors that went into hanging up my baseball career," Oakes said. "First and foremost, was the health of my father. I always felt that I needed to be doing more to help him and our family during my two years away. With his health failing, I couldn't stand to be away from my family for another year. It is a decision that I have never regretted and never will. I got to spend the last two years of my dad's life by his side learning even more from him about baseball and life."

"Playing minor league baseball is definitely a grind and takes a toll on a person both physically and more so mentally," Oakes said. "It is such a long season in which you have to stay focused and always working toward your goals or you will get beat out by someone else. The overall lifestyle of a minor leaguer is not great with extremely low pay, all the travel and time commitment but players grind that part out in pursuit of making it to the top — the Big Leagues where the lifestyle is much more glamorous."

While he was done playing baseball, the game was still in his blood.

Oakes decided to follow in his father's footsteps and coach the game he loved.

"Obviously, growing up around baseball and having it be a part of life ever since I can remember was a huge factor," he said. "Learning from my dad who coached professionally and collegiately for 30 years and seeing the impact he made on athletes both on and off the field was something I wanted to do as well. Both of my brothers are coaches as well and it is something that our family is very passionate about."

His first coaching job was as an assistant coach for Legacy Christian Academy in Andover. The next year he was named the school's head coach.

"I really enjoyed the experience and that solidified the decision of wanting to make coaching my career path," Oakes said.

In 2015, he was named the pitching coach for St. Mary's University in Winona, a position he still holds.

"My coaching philosophy is to always teach life lessons through the game of baseball," Oakes said. "I strive to make a difference in the lives of the players I coach both on but more importantly off the field. I want each player that I coach to feel loved and to know that I am there for them in any situation."

He learned that philosophy from his dad.

"My coaching style and approach to pitching is a direct reflection of what my dad did for so many years," Oakes said.

Before his father died, Oakes coached against him in an exhibition game at the University of Minnesota's Siebert Field.

"My dad has always been my mentor and a coach I have always (striven) to become," Oakes said. "If you walk into my office at St. Mary's, you will see signs of my dad everywhere you look. It gives me comfort and is a reminder that he is still with me each and every day as I continue to strive to make him proud in everything that I do. His legacy and impact are still very much alive today. It is my ambition to keep that going for as long as I coach."