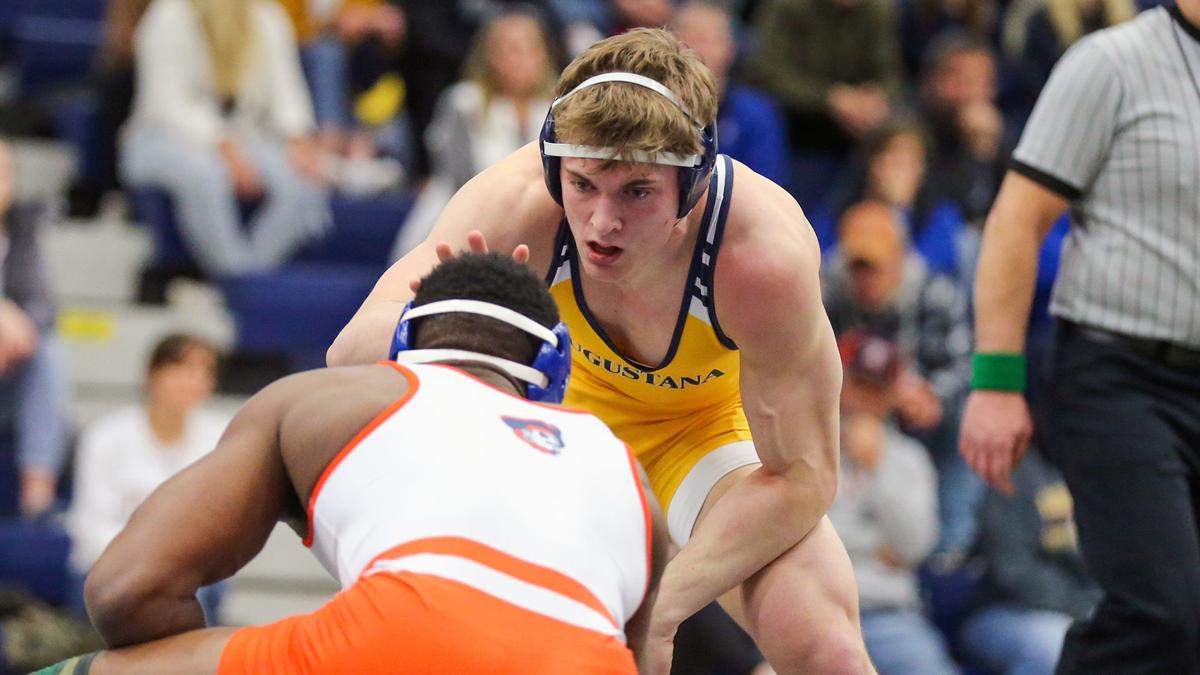 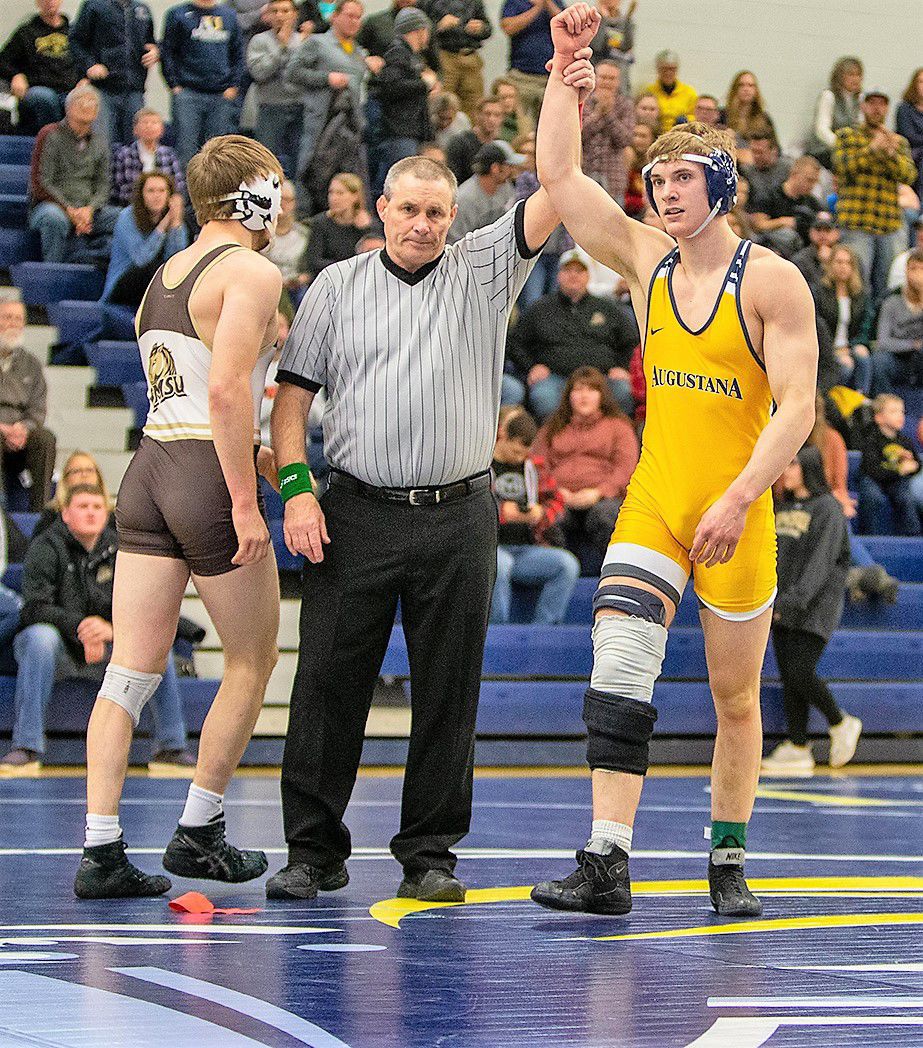 He was able to do that, just not in the way he dreamed of.

But the NCAA canceled all winter national championships due to concerns over the novel coronavirus.

Kelvington's wrestling career was over.

"My reaction was pretty much disappointment and sadness," he said. "Everyone in the arena seemed pretty stunned, and it was eerily quiet on the floor for a few minutes. Most people were in disbelief. I sat down and called first my girlfriend then my dad to let them know what had happened. Teammates, coaches, and administrators came up and gave me hugs."

Kelvington, a Jordan High School graduate, got his wish to finish his career at the Premier Center because soon after they canceled the tournament, he was awarded the prestigious Elite 90 Award on the center's floor.

"I took some pictures in celebration of the award, which was odd in contrast to what had just happened," he said. "Although this award was a goal of mine even above being a national champion, it seemed like a consolation prize in that moment."

Being the host school, Kelvington's and Augustana's work wasn't done in the Premier Center as they had to take down all the mats and clear the arena.

"Once we had the mats all rolled up, that was it," Kelvington said. "I distinctly remember not wanting to take my wrestling shoes off because I knew that I would never wear them again as a competitor. The whole thing went really quick, and it didn't really sink in at the time. I'm not sure if it has yet. The disappointment lingered for awhile and still does a little. It helps some knowing that the cancellation was meant to protect the health and safety of our community, and I don't doubt one bit that it was the right move, but it was still extremely disappointing."

The road to the 2020 NCAA Division II national championships was not easy for Kelvington.

He battled through four knee injuries in his wrestling career but he continued to bounce back and get back on the mat — even for his senior season.

Kelvington opened the 2019-2020 season with high hopes and and won a title at the Jimmie Open to start the season on Nov. 2.

Augustana traveled to Tempe, Arizona to take on the Division I Arizona State Sun Devils on Nov. 15.

Kelvington got the opportunity to wrestle No. 8 ranked Anthony Valencia in that dual meet and lost 18-5.

During the match, Kelvington injured his knee again but gutted through it and finished the match.

After the match, he learned he had torn his ACL for the fourth time.

The injury didn't stop Kelvington, as he was determined to finish his senior season on the mat.

"My athletic training team, coaches, and myself were able to get this diagnosed once we got back, and it was decided that I could compete without it," Kelvington said. "I wrestled again at NDSU a couple weeks later but sat out open tournament events and only competed in duals for the remainder of the regular season. It was a really fun season, and the team had a lot of success."

How was it wrestling with the torn ACL?

"Oddly enough, it really didn't affect how I wrestled as far as the techniques I could use or the positions I could get in," Kelvington said. "It did, however, affect how much I could train and how I prepared for and recovered from training. I did have to change some of the conditioning workouts and lifts. The biggest thing was to manage the pain and swelling that came with the injury. I had to cut back on my extra wrestling workouts. I also had to cut back on competition and only competed in dual meets until the regional tournament while skipping open tournaments, which were more strenuous. I also had to spend a lot more time strengthening, stretching, and preparing for practices. Similarly, I had to spend time recovering from practices with ice and other recovery techniques."

He continued, "I really had so much support from the training staff, my teammates, coaches, family, and girlfriend that allowed me to continue. My athletic trainer Jordan Lindberg put in a huge amount of time in helping me to continue to strengthen the muscles surrounding my knee as well as preparing me for workouts and helping to accelerate my recovery from training and competition. I really feel extremely fortunate to have been able to compete this season."

The knee injuries began in high school when had ACL reconstruction on his left knee in April of 2013 when he was a freshman at Jordan High School.

He bounced back from that injury and earned a fourth place finish at the state tournament his senior season.

That strong career with Scott West sent him to Augustana were the injury bug hit once again.

This time it was his right knee he needed surgery on in his freshman season at Augustana in December 2016.

Less than two years later, he had his third knee surgery in September 2018. He injured it again this year but decided against surgery.

"I do not plan to get it repaired as of now," he said. "I feel like I can maintain the activity level that I want post-wrestling without it. Moreover, there is some uncertainty with future elective surgeries given the virus situation, so my plan right now is to go without. I may get it repaired later if I feel my lifestyle requires it."

Even though he has one more year of eligibility remaining, Kelvington said he is done wrestling.

"My competitive career is likely over, but I hope to continue to be involved in the sport in some way," he said. "I'm not sure what that will look like right now. The team doctor advised me not to wrestle at all following this past season even if I get my knee repaired again, which I'm not sure if I will even do. I also will have to see what my grad school commitments allow me to do."

He plans on graduating from Augustana this spring with a bachelor's degree in biochemistry.

"I have spent this year applying to graduate schools in the biomedical sciences," he said. "I have to make a decision between the two schools I have been accepted to, and the deadline for this decision is April 15. I will either attend the University of Iowa and begin pursuing a Ph.D. in the department of pharmacology and neuroscience or George Washington University, where I would pursue a Ph.D. in Neuroscience as a part of the Institute for Biomedical Sciences. Either way I hope to focus my research towards intellectual disability or Autism Spectrum Disorder. There are a lot of possible research mentors and topics I could work on, and I am really excited for the future because of that."