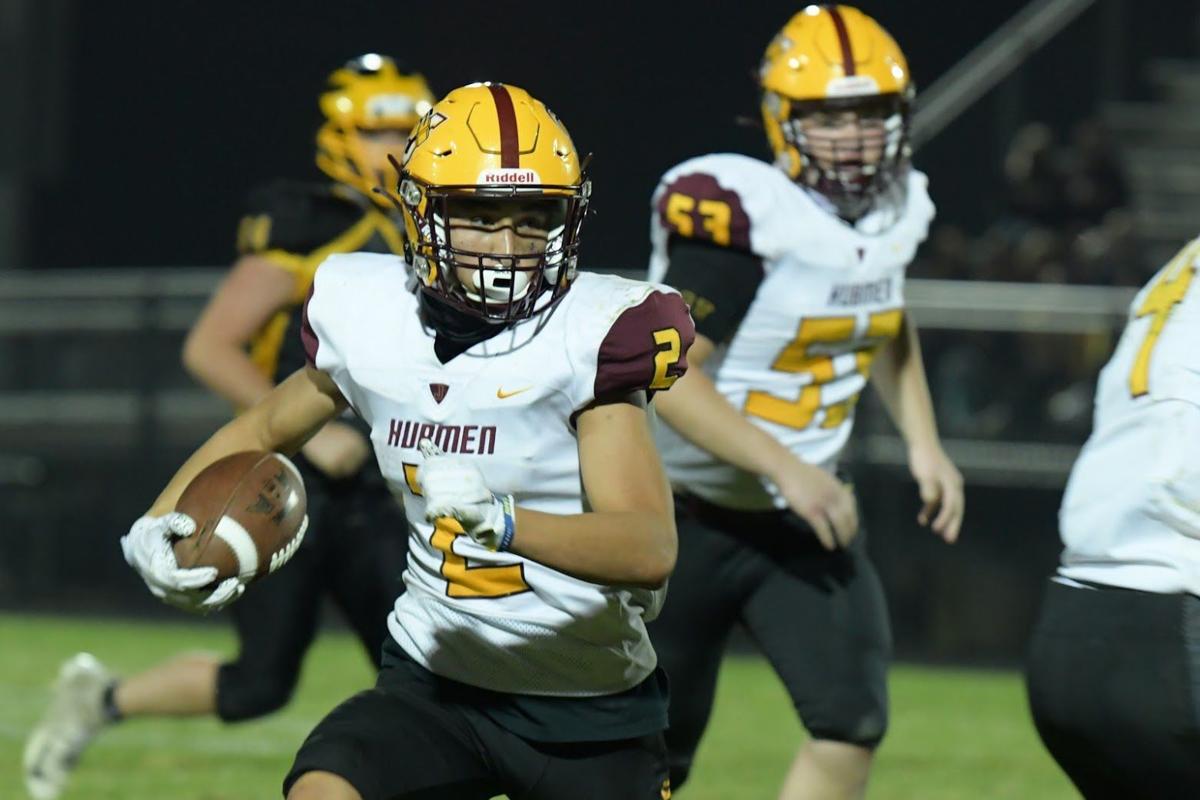 Junior Ashton Sivilay had five catches for 79 yards and a touchdown in Jordan’s 41-7 win at Sibley East to open the season Oct. 9. 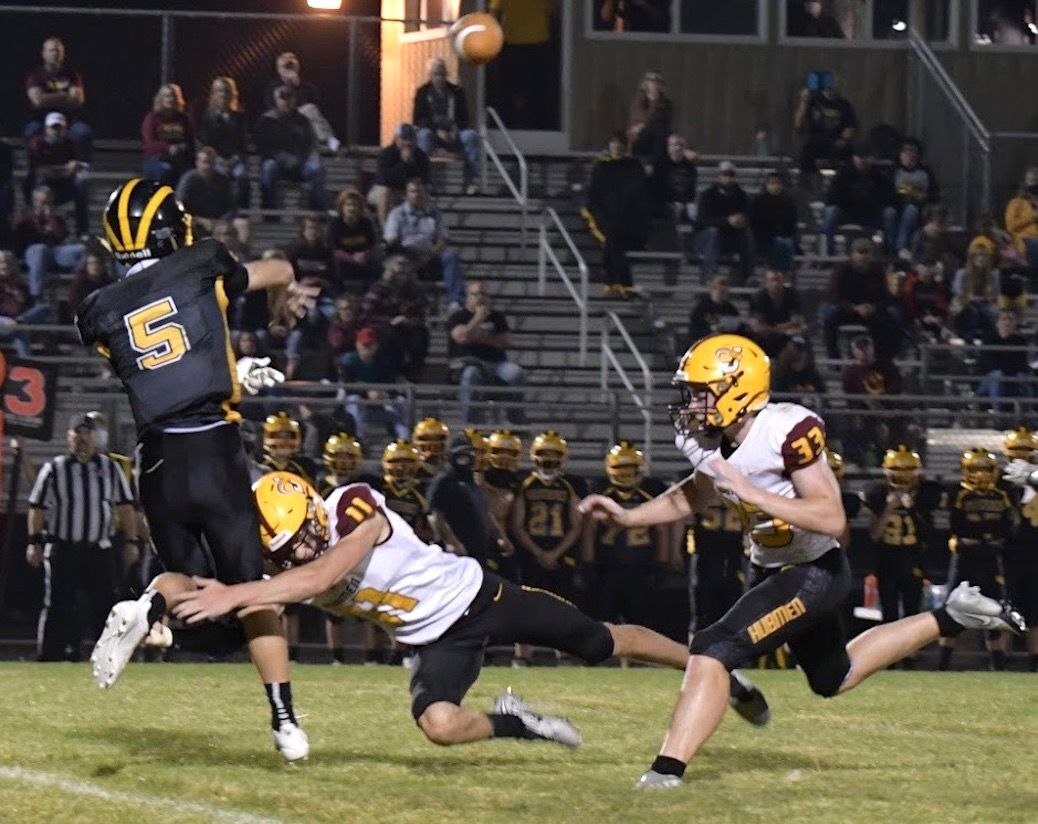 Seniors Fletcher Kahn (11) and Ian Hennen apply pressure to the quarterback in Jordan's 41-7 win at Sibley East in the season opener Oct. 9. 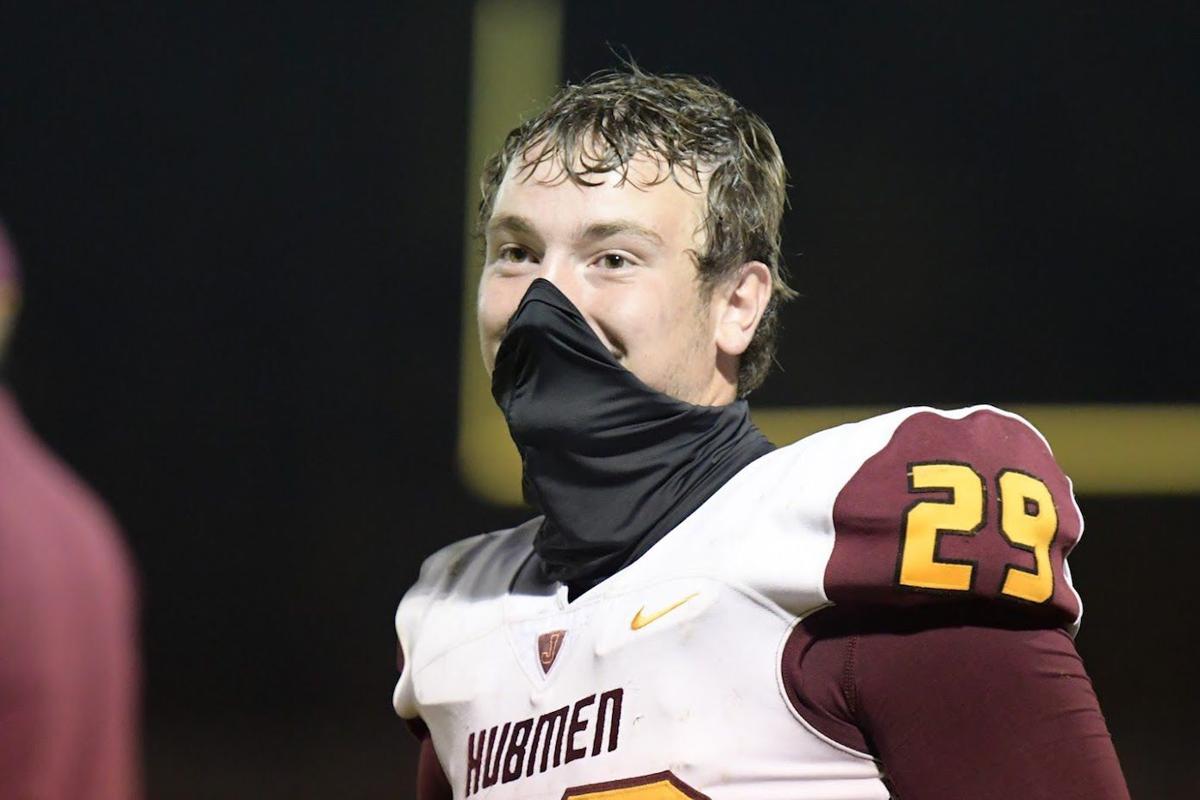 Senior Eric Downs had led Jordan's defense in the team's 3-0 start with a team-best 31 tackles.

Junior Ashton Sivilay had five catches for 79 yards and a touchdown in Jordan’s 41-7 win at Sibley East to open the season Oct. 9.

Seniors Fletcher Kahn (11) and Ian Hennen apply pressure to the quarterback in Jordan's 41-7 win at Sibley East in the season opener Oct. 9.

Senior Eric Downs had led Jordan's defense in the team's 3-0 start with a team-best 31 tackles.

The Jordan football team hasn’t met much resistance in its first three games.

The Hubmen are racking up points like a pinball machine, outscoring their opponents by a combined margin of 124-15, including a 41-0 thrashing of Tri-City United Oct. 23 on the road.

Jordan opened the season with a 41-7 victory at Sibley East Oct. 9 and rolled to a 42-8 home win over Norwood Young America in its home opener Oct. 15.

The No. 10-ranked Hubmen face winless Belle Plaine at home Oct 30 at 7 p.m. The team’s final two games of the regular season are home to LeSueur-Henderson Nov. 6 and at No. 2 Marshall Nov. 11.

Marshall is off to a 3-0 start as well. The Tigers beat Jordan twice last season — 42-0 in the regular season and 31-20 in the first round of the Section 4AAAA playoffs.

Junior quarterback Noah Millhouse completed 23 of 27 passes for 278 yards and four touchdowns in the Hubmen’s win over Tri-City United. Millhouse connected on two scoring strikes to junior Owen Montreuil, who finished with three catches for 106 yards.

Millhouse has completed 45 of 71 passes for 650 yards and seven touchdowns through three weeks. He also has three rushing touchdowns.

Junior David Buesgens has led the Jordan ground game after three games with 33 carries for 159 yards and four touchdowns, while catching four passes for 44 yards.

Senior Reihle Murray led the Hubmen on the ground versus Tri-City United with 14 carries for 62 yards. He has 25 carries for 151 yards and a touchdown on the season, while senior Ian Hennen has 14 rushes for 115 yards and a score.

Junior Alex Mizak has two touchdown grabs for Hubmen through three games, while senior Hunter Bedney has one.

“We have been very impressed with the effort of the players,” Jordan coach Ozzie Sand said. “We can tell they are excited to be playing football again and that has shown on the field. As an offense, we continue to learn each game. What has been impressive is the team’s ability to win in different ways.”

Jordan had six rushing touchdowns in beating Norwood Young America, so the offense is showing it can get things down through the air or running behind the offensive line.

“This is a testament to the players that they are able to adjust to the opposing team’s defense,” Sand said.

Defensively, Sand said that unit would be the team’s strength going into the season. So far, it has not disappointed.

The defense has been led by senior Eric Downs, who has a team-best 31 tackles through three games.

“As we thought going into the year, our defense has been very impressive,” Sand said. “They are playing at a high level right now and it is exciting to see how they will continue to progress throughout the year.”

Junior Peyton Nawrocki blocked a kick and scored the Hubmen’s first touchdown in the win over Tri-City United. Senior Nkade Noyes had an interception.

Nawrocki also had a touchdown in the season opener over Sibley East, returning a fumble 61 yards for a score in the second quarter to give his team a 27-0 lead. Sophomore Marcus Karsky had fumble recovery, five tackles and a sack in that win, while Hennen also had a sack. Sivilay had an interception.

Against Norwood Young America, Sivilay and Montreuil both had picks. Senior Fletcher Kahn led the team with two sacks.

The Minnesota State High School League originally pushed football back to the spring in a board of directors meeting back in early August due to the coronavirus pandemic. But the league reversed that decision Sept. 21.

There will be no state tournament this fall, but a postseason will be played. A format has not been announced yet.

Last season was Jordan’s first in Class 4A. The Hubmen made the state field in Class 3A in 2018, along with qualifying in 2012.