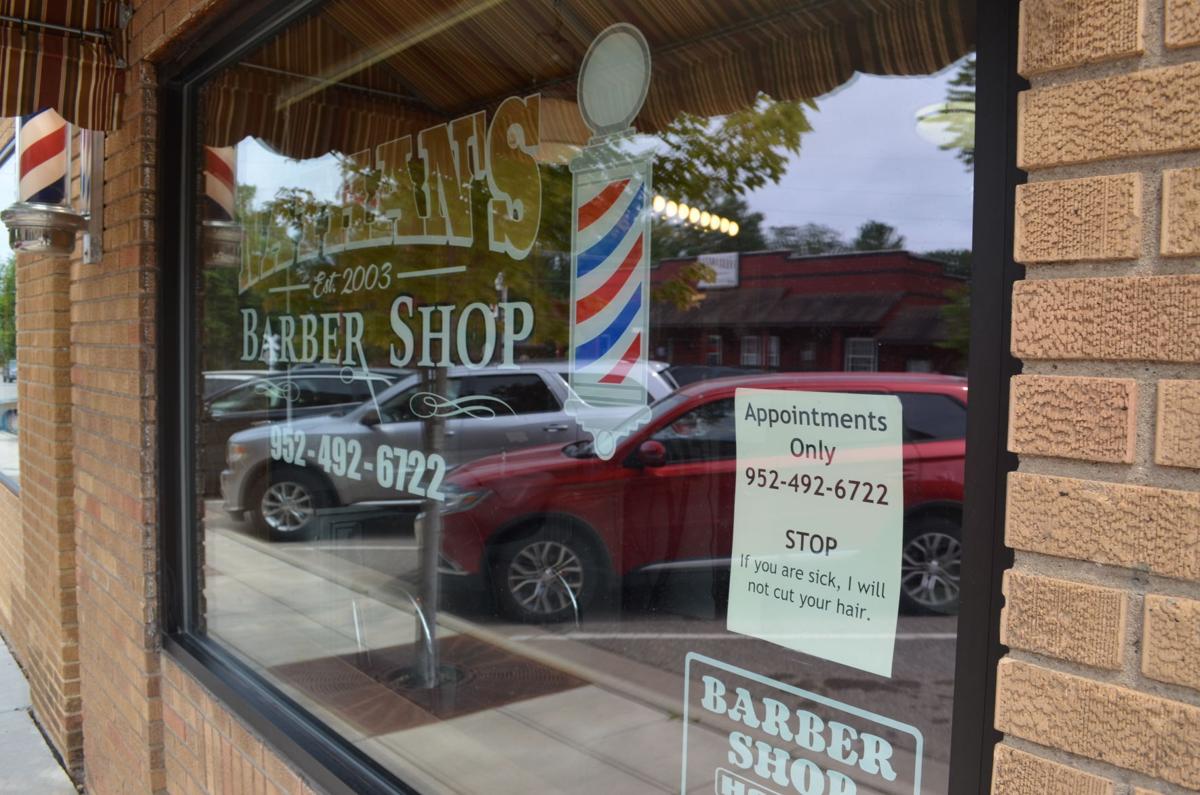 A sign in Nathan’s Barber Shop in Jordan directs customers to stay home if they’re sick, per CDC COVID-19 guidelines. 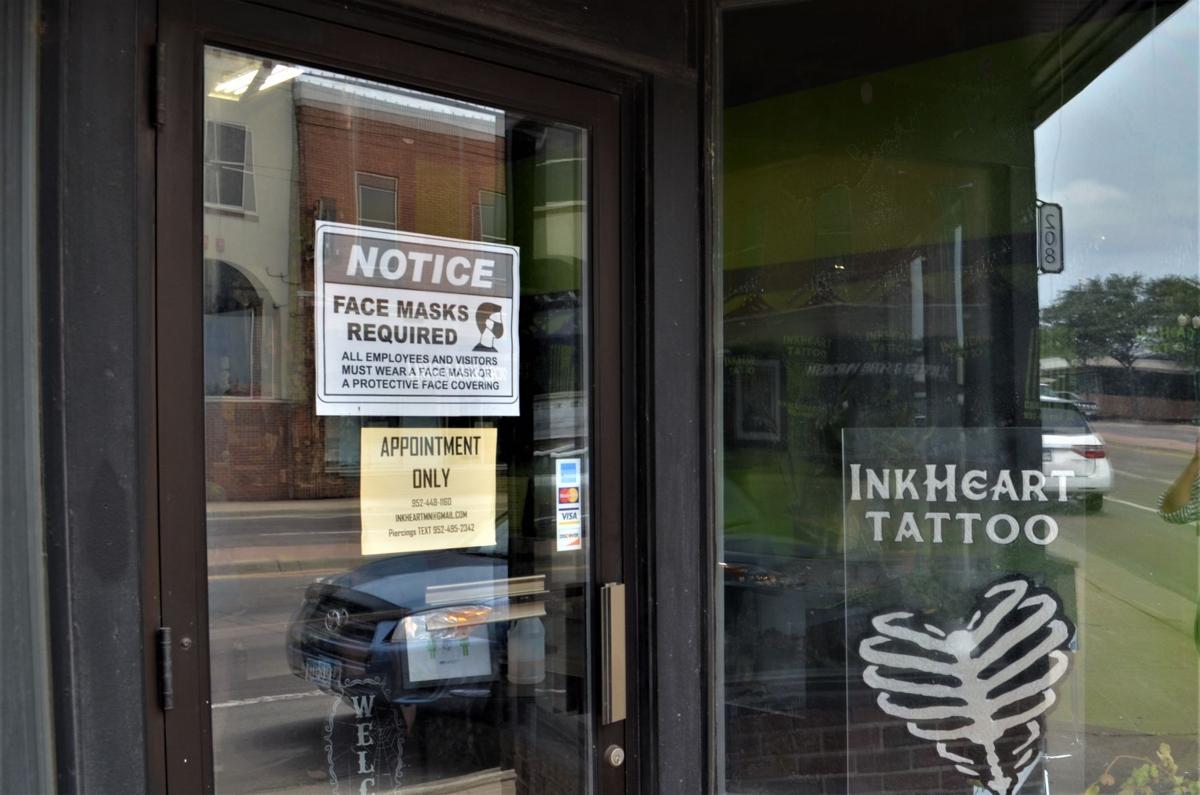 A sign at InkHeart Tattoo parlor in Chaska directs all visitors to wear masks, though the state mask mandate has been lifted since July 1.

A sign in Nathan’s Barber Shop in Jordan directs customers to stay home if they’re sick, per CDC COVID-19 guidelines.

A sign at InkHeart Tattoo parlor in Chaska directs all visitors to wear masks, though the state mask mandate has been lifted since July 1.

As the COVID-19 Delta variant has ripped through southern U.S. states and caused a national surge of cases, Minnesota and the southwest Twin Cities metro area have been no exception. While nowhere near the peaks of 2020, health officials in Scott and Carver counties are keeping close tabs on case numbers and the future.

When Gov. Tim Walz lifted the state's mask mandate on July 1, COVID-19 cases were on a steep downward trend, thanks to the three vaccines that have been widely available to the public since spring 2021. However, as Covid cases have surged upward again since early July, Scott County Public Health Director Lisa Brodsky sees a worrying trend.

“I believe that we’re going to see a continued rise in cases. I have no reason to believe that it’s going to be different than it was previously, though it may be worse because we know the Delta variant is much more contagious and carries a higher viral load,” Brodsky said.

Unlike in the early months of the pandemic, Brodsky estimated that around one in four new Scott County COVID-19 cases have been in people age 19 or younger since July.

“It’s a very interesting pattern compared to last time. We have hardly any seniors,” Brodsky said. “I attribute that to the fact that we have 99% of our seniors vaccinated.”

Over in Carver County, public health officials have seen fairly steady COVID-19 case numbers. With 72 new cases as of Aug. 6, the county is on track to surpass its July case count of 131, but that’s still miles below its 2021 peak of 1,387 cases in March, according to the Carver County COVID tracker.

“Nearly 62,000 of our residents have received at least one vaccine dose; more than 73% of eligible residents 12 years and older have received at least one vaccine dose,” Scott wrote in an email. “We do know that we have areas of the County with lower vaccination rates, and we’re working with our partners to bring the vaccine to those areas to make it more accessible for residents living in those areas and who want to receive it.”

According to the Centers for Disease Control, the Delta variant is more contagious than the original strain of the SARS COVID-19 virus that began to spread globally in early 2020. Other variants have emerged, but Delta is noticeably more infectious: From June to July of 2021, it jumped from causing 57% of infections in Minnesota to over 75%, said Scott Smith, a Minnesota Department of Health public information officer, in an email. Nationally, the variant caused around 83% of COVID cases in the U.S. on July 31 — a massive leap from the beginning of June, when it made up just 8.6% of national cases.

“This variant is much more contagious and is spreading rapidly in the United States, particularly among people who are not yet vaccinated,” Smith wrote. “Wherever there are low vaccination rates, people remain more susceptible to the Delta variant as well as all strains of the SARS CoV2 virus.”

The good news is, the Pfizer and Moderna vaccines are still "powerfully effective" at preventing COVID-19 infections, Scott added. They also reduce the severity of rare breakthrough cases, or cases in people who are more than two weeks out from their final shot. Breakthroughs make up just 0.01% of infections in Minnesota, with 99.9% of new cases appearing in unvaccinated people, Smith said.

Brodsky and Scott recommended that all eligible residents get vaccinated as a first line of defense and follow CDC guidelines to protect themselves and their neighbors: Wear masks in public indoor places, wash your hands, and stay home if you’re sick.

“I think we declared victory too soon,” Brodsky said. “It’s not over, we’re not out of the woods, and the more people get vaccinated, the sooner we can declare victory.”

Covid-19 vaccines are free and available to all Scott County residents ages 12 and up at the weekly walk-in clinic on Wednesdays from 9 a.m. to 12 p.m. at the Scott County Government Center, 200 4th Ave. West, in Shakopee.

, available weekdays 8 a.m. to 8 p.m., in English and Spanish. Residents can also email covid@co.scott.mn.us for information.

Covid-19 vaccines are free and available to all Carver County residents ages 12 and up at the weekly walk-in clinic every Tuesday in August from 2-4 p.m. at the Carver County Government Center, 600 E Fourth St. in Chaska.

or email public-health@co.carver.mn.us for information.