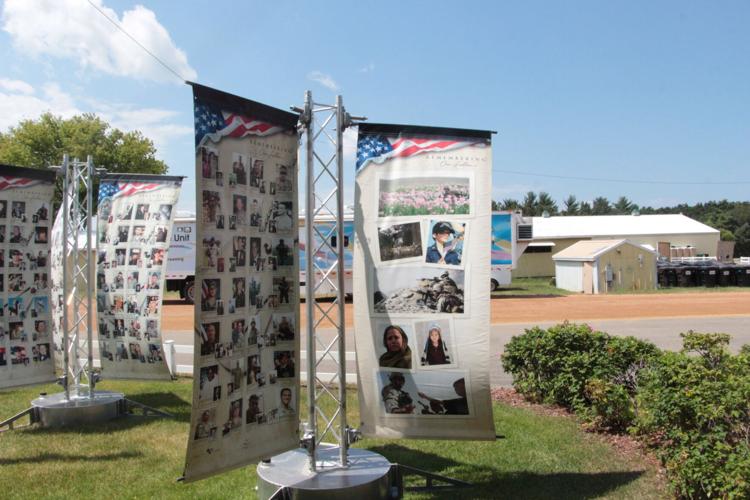 The “Remembering our Fallen” exhibit appeared at the Scott County Fair from July 27-31. 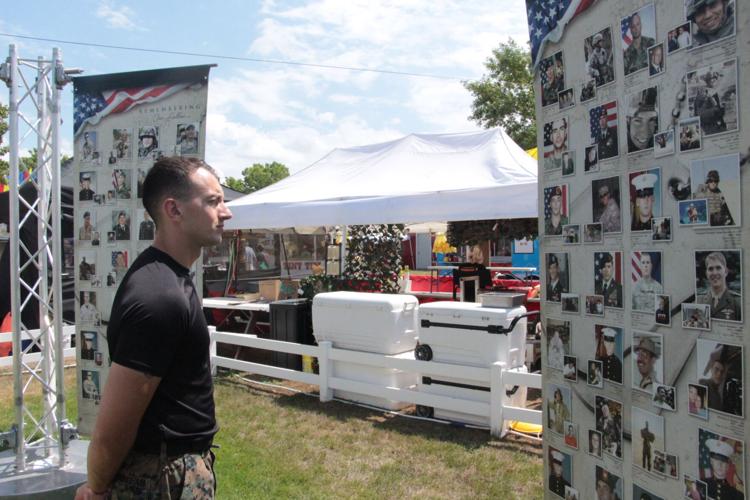 Sgt. Chris Cunningham takes a break from the Marine recruiting tent at the Scott County Fair to look at the “Remembering Our Fallen” memorial. 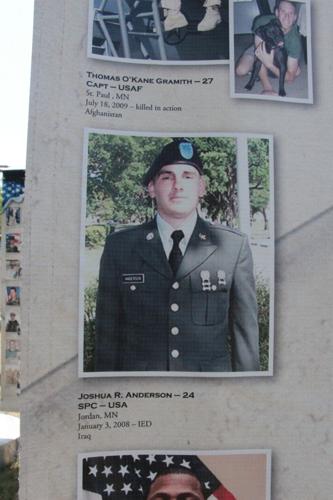 Spc. Joshua Anderson, a Jordan man who was killed in Iraq, is included in the memorial. 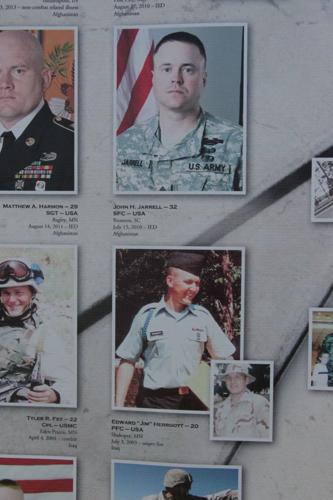 Pfc. Edward Herrgott, a Shakopee man who was killed in Iraq, is included in the memorial. 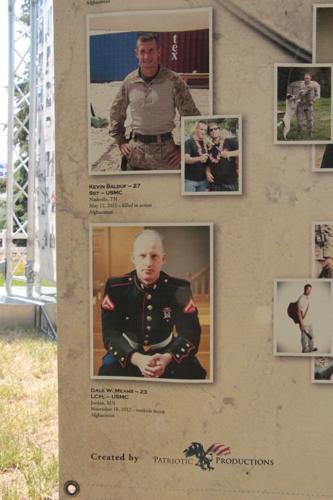 Lance Cpl. Dale Means, a Jordan man who was killed in Afghanistan, is included in the memorial.

The “Remembering our Fallen” exhibit appeared at the Scott County Fair from July 27-31.

Sgt. Chris Cunningham takes a break from the Marine recruiting tent at the Scott County Fair to look at the “Remembering Our Fallen” memorial.

Spc. Joshua Anderson, a Jordan man who was killed in Iraq, is included in the memorial.

Pfc. Edward Herrgott, a Shakopee man who was killed in Iraq, is included in the memorial.

Lance Cpl. Dale Means, a Jordan man who was killed in Afghanistan, is included in the memorial.

Craig Plummer first saw the “Remembering Our Fallen” memorial last year while he was in Sturgis, South Dakota, with his brother.

A few months later, Plummer’s brother told him that “Remembering our Fallen,” a traveling exhibit, needed some drivers. He reached out and learned that one of the full-time drivers had quit. After talking to his family, he took the job and has been driving the memorial from city-to-city for the last two months.

“Remembering our Fallen” was featured at the Scott County Fair in Jordan from July 26-31. The memorial features more than 5,000 photos of soldiers who died in the War on Terror that began after the Sept. 11, 2001, terrorist attacks — either from wounds suffered in battle or from post-traumatic stress that led to their suicide. In 2017, the memorial was featured on The Mall in Washington D.C.

The memorial includes 32 “tribute towers” that each include three banners.

According to the non-profit that runs the exhibit, Patriotic Productions, the towers hold about 70% of the names of those who died in the War on Terror. Instead of finding pictures of everyone who died in combat, the memorial relies on families to submit photos.

Patriotic Productions runs two memorials — one for the Western part of the United States and one for the Eastern part of the country. Co-founders Bill and Evonne Williams were inspired to start the memorial after reading an Omaha World-Herald story about the father of Sgt. Joshua Ford, who felt his son had been forgotten.

Based on that story, they made their slogan: “Man does not die until he is forgotten.”

“We can never forget those who sacrificed everything for our freedom. We must remember these American Heroes and speak their names when we see their family members,” Bill Williams said in a press release about the project.

Plummer, who was in the Navy for 25 years, sat under a tent with the exhibit slogan appearing on all four sides of him. He always sets up the introduction banners near the entrance with the red and blue banners — red for those who died in the United States or on a military base abroad and blue for those who died by suicide as a result of Post-Traumatic Stress Disorder. The rest of the towers have white banners representing those who died overseas.

“It’s a unique memorial in the fact that we have the pictures of them,” Plummer said. “As you walk through, a lot of them have some sort of a service photo, and then a personal photo, as well. So it kind of gives a little bit of a look into the life of that veteran.”

At the Scott County Fairgrounds, the exhibit was set up right at the entrance to the fair.

“We thought it would be something good for people to see. And remember why we’re in a free country. There are people that risked their lives every day for us that are not military bound,” Fair Manager Erika Ediger-Connolly said. “And it’s just kind of a good remembrance of why we’re here and why we are able to have county fairs because of those who fight for us.”

Three men from Scott County are featured on Tower 22: Pfc. Edward Herrgott from Shakopee and Spc. Joshua Anderson and Lance Cpl. Dale Means, both from Jordan. All three were killed in their early twenties — Herrgott and Anderson in Iraq, Means in Afghanistan. They died between 2003 to 2012.

On Tuesday, the sister, nephews and niece of Sgt. Joseph Hamski, who grew up in Ottumwa, Iowa, came to hang the banner where he is pictured. It was the first time the sister had seen the memorial.

When Plummer was in Montgomery City, Missouri, veterans would come through and look at the binders listing everyone on the banner to see if they knew someone and where their name appeared. They would often share stories. If people can’t find the person they served with, Plummer encourages them to reach out to the family and get that person added to the memorial.

Plummer’s goal is to make more people aware of the memorial so that more names and photos can be added. Right now, he does not recognize anyone from the banners, but he has a friend from boot camp who qualifies for the blue banner. He hopes that when the next addition comes his friend will be on it.