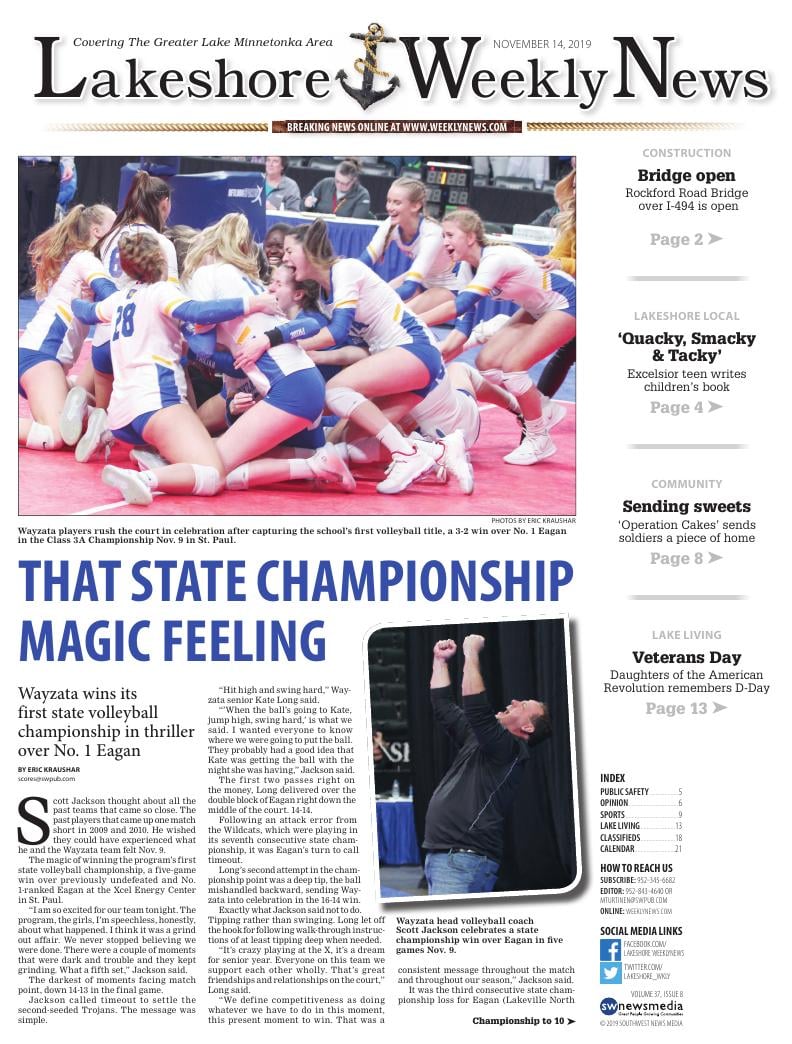 Wayzata players rush the court in celebration after capturing the school’s first volleyball title, a 3-2 win over No. 1 Eagan in the Class 3A Championship Nov. 9 in St. Paul.

Kate Long picks up fellow senior and setter Olivia Johnson following the final point off the hand of Long in a 3-2 win for Wayzata in the Class 3A State Championship Nov. 9.

Scott Jackson thought about all the past teams that came so close. The past players that came up one match short in 2009 and 2010. He wished they could have experienced what he and the Wayzata team felt Nov. 9.

The magic of winning the program’s first state volleyball championship, a five-game win over previously undefeated and No. 1-ranked Eagan at the Xcel Energy Center in St. Paul.

“I am so excited for our team tonight. The program, the girls, I’m speechless, honestly, about what happened. I think it was a grind out affair. We never stopped believing we were done. There were a couple of moments that were dark and trouble and they kept grinding. What a fifth set,” Jackson said.

The darkest of moments facing match point, down 14-13 in the final game.

Jackson called timeout to settle the second-seeded Trojans. The message was simple.

“’When the ball’s going to Kate, jump high, swing hard,’ is what we said. I wanted everyone to know where we were going to put the ball. They probably had a good idea that Kate was getting the ball with the night she was having,” Jackson said.

The first two passes right on the money, Long delivered over the double block of Eagan right down the middle of the court. 14-14.

Following an attack error from the Wildcats, which were playing in its seventh consecutive state championship, it was Eagan’s turn to call timeout.

Long’s second attempt in the championship point was a deep tip, the ball mishandled backward, sending Wayzata into celebration in the 16-14 win.

Exactly what Jackson said not to do. Tipping rather than swinging. Long let off the hook for following walk-through instructions of at least tipping deep when needed.

“It’s crazy playing at the X, it’s a dream for senior year. Everyone on this team we support each other wholly. That’s great friendships and relationships on the court,” Long said.

“We define competitiveness as doing whatever we have to do in this moment, this present moment to win. That was a consistent message throughout the match and throughout our season,” Jackson said.

Wayzata (31-3), unbeaten in five-game matches this season, losses to Minnetonka and twice to Northfield in tournament play in the regular season, won the match because of big-time play from its stars.

Olivia Johnson flew all around the court to assist on 58 swings with 15 digs.

Ella Voegele was one of five Trojans in double figures in digs with 21, a team effort of 91 against a balanced Eagan attack that had five hitters with eight or more kills.

Like the semifinals, Eagan had an answer each time it fell behind.

Wayzata closed out game one 25-20 on a Jeseritz ace and Lily Emlong solo block. The Wildcats answered, a 10-3 run opening up a 10-point Eagan lead en route to a 25-14 victory.

Wayzata scored 17 of its 25 points in game three on hits, including six kills each from Jeseritz and Long in a 25-21.

Wayzata led 5-4 in game five. Eagan led 10-9. Twice the Trojans regained the lead, but following a serving error, Abby Moe’s kill gave the Wildcats a chance at the title at 14-13.

“Definitely a lot of energy, a lot of emotion on the court. It’s the last three, two, one point of your season, of your senior year. It’s just how you want to go out, no regrets,” Long said.

For Long, for Helmich, for Johnson, Emlong, Katelyn Empkey, and Gabby Tolander, they go out as champions.

“Eagan’s a great team. They have great players at every position. If you had told me Aug. 11 that this would be the finals, I wouldn’t have been at all surprised. This is what we expected to see. That’s my belief in my team,” Jackson said.

Wayzata needed six straight points down 24-18 in game three to win, Helmich’s smash capped a 9-1 run to advance the Trojans to the championship.

“I told the girls this in the second set, ‘Those balls we’re getting up, we would have not gotten up even two days ago,’” Helmich said. “We’re building on top of everyone’s effort. Our defense has blossomed and really pushed us.”

Wayzata came alive at key points of all three games. Trailing by two at 13-11 to open the match, the Trojans scored 14 of the next 17 points to grab the lead.

The story was the same in game two. Tied at 13, big points went the Trojans’ way, Helmich and Sophie Jesewitz each scoring kills with the game tight at the end.

In game three, behind 24-18, back-to-back points from Kate Long and a third kill from teammate Katelyn Empkey was followed by three consecutive North St. Paul hitting errors to tie the match at 24. 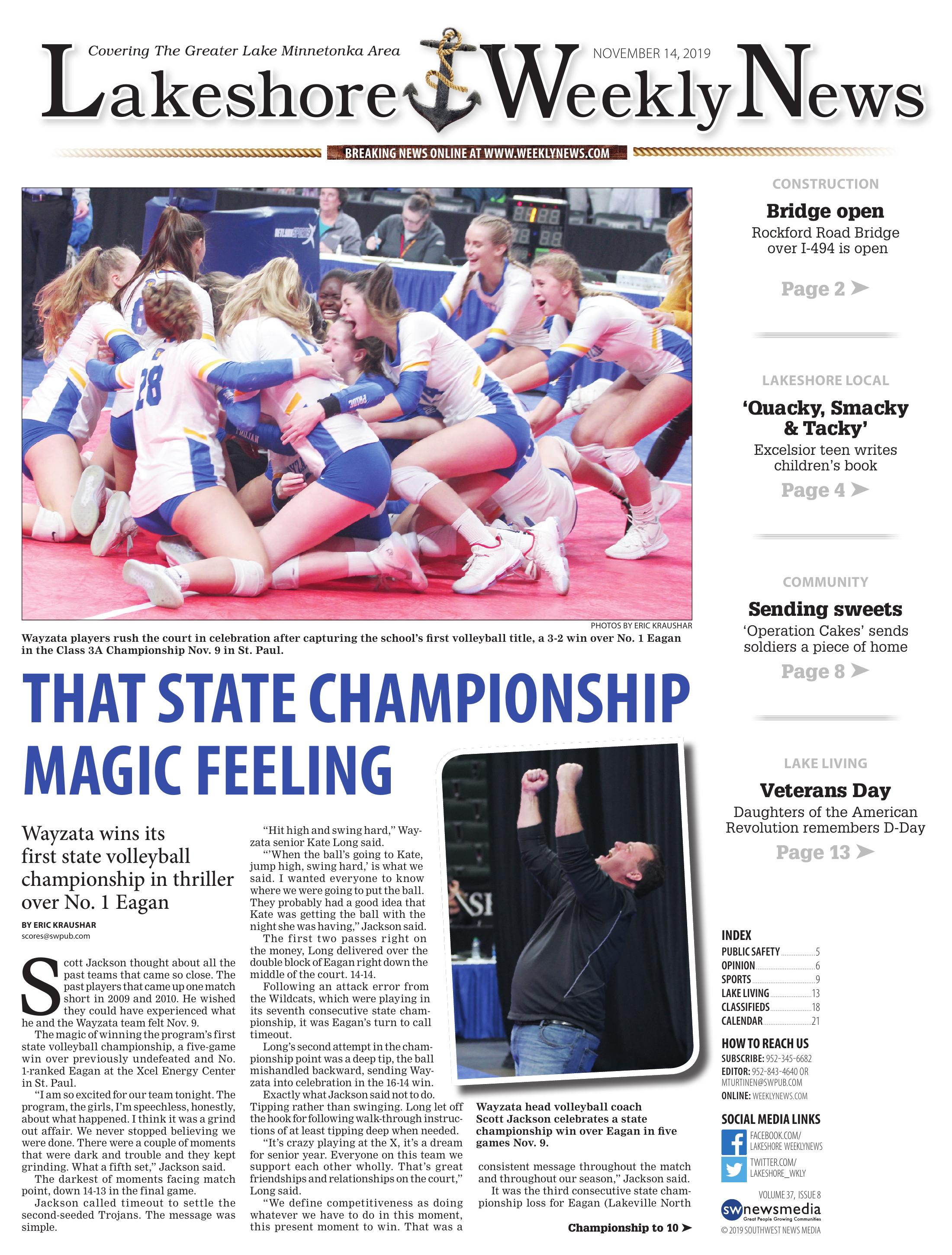