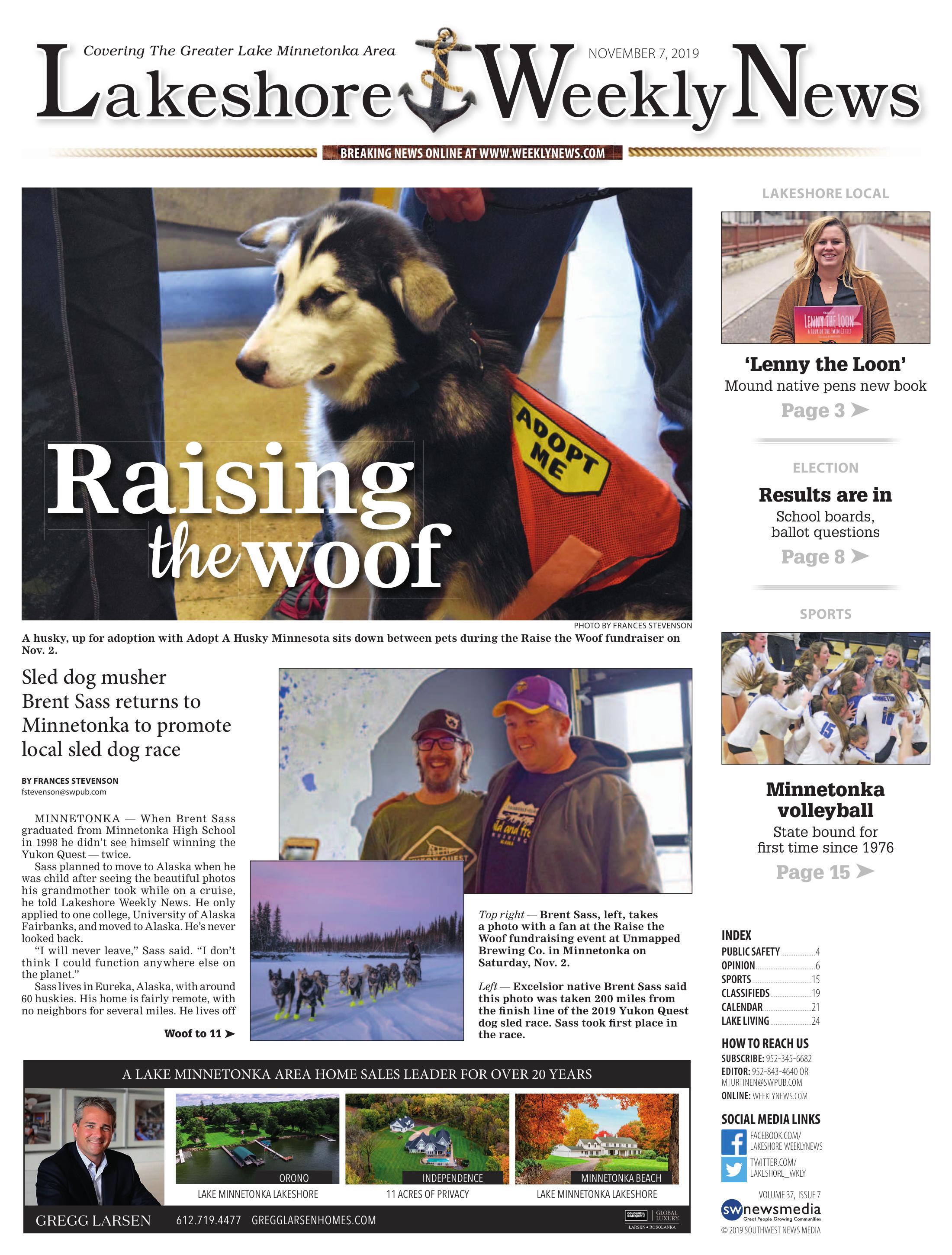 A husky, up for adoption with Adopt A Husky Minnesota sits down between pets during the Raise the Woof fundraiser on Nov. 2.

Top right — Brent Sass, left, takes a photo with a fan at the Raise the Woof fundraising event at Unmapped Brewing Co. in Minnetonka on Saturday, Nov. 2.

A Unmapped Brewing patron’s dog gets some love.

A wooden map, up for silent auction at the Raise the Woof event, showing the Lake Minnetonka Klondike Derby route.

A stuffed husky for sale at the Raise the Woof event. T-shirts and limited edition pint glasses were also sold.

Brent Sass finished the race with all 14 of his dogs. The feat, along with his care for the dogs, earned him a Vet’s Choice Award in the 2019 Yukon Quest race.

A poster from the 1970s describing a dog sled race event to take place in Excelsior.

Annette Colbourne is pictured at the 1937 Klondike Day Dog Race. According to Hennepin County Library, she was a repeat winner of the Minneapolis Tribune Dog Derby. The pictured dog’s name is Tribune. The upcoming Lake Minnetonka Klondike Dog Derby is named after this Excelsior event.

Josh Hway of Dynamic Photowerks took this photo of dogs and their musher in northern Minnesota.

MINNETONKA — When Brent Sass graduated from Minnetonka High School in 1998 he didn’t see himself winning the Yukon Quest — twice.

Sass planned to move to Alaska when he was child after seeing the beautiful photos his grandmother took while on a cruise, he told Lakeshore Weekly News. He only applied to one college, University of Alaska Fairbanks, and moved to Alaska. He’s never looked back.

“I will never leave,” Sass said. “I don’t think I could function anywhere else on the planet.”

Sass lives in Eureka, Alaska, with around 60 huskies. His home is fairly remote, with no neighbors for several miles. He lives off the grid and has to make his own power, he told the paper. He loves his life in Alaska but it’s a lot of work, he admits. He’s not sure how long he’s going to be living off the grid in the wilderness.

Sass returned to Minnetonka on Saturday, Nov. 2, for Raise the Woof at Unmapped Brewing Co. The fundraiser was held to promote the Lake Minnetonka Klondike Dog Derby, a 40-mile sled dog race being held in early February.

He heard through the grapevine that his hometown of Excelsior was hosting a sled dog race and he felt he had to be a part of it, he said. Sass will not be racing because the derby is the same weekend as the Yukon Quest, but he wanted to promote the event if he could.

At the brewery, Sass gave a talk on his life in Alaska and participated in a Q&A with mushers and sled dog veterinarians. The event also featured a silent and live auction, a food truck and limited edition Klondike pint glasses, as well as adoptable dogs from Can Do Canines and Adopt A Husky Minnesota. The event raised more than $10,000 for the Lake Minnetonka Klondike Derby, event spokesperson Dale Kurschner said.

It was a few years after moving to Alaska before Sass learned about sled dog racing, but today Sass is a two-time Yukon Quest winner — he won in 2015 and 2019. The Yukon Quest is a 1,000-mile international sled dog race between Fairbanks, Alaska, and Whitehorse, Yukon, Canada.

His big advice to the mushers in the Lake Minnetonka Klondike Derby is to “take care of your dogs.”

“It’s all about the dogs. In both my wins I not only won but I got the Veterinarian’s Choice Award, which is given to the musher who takes care of their dogs the best during the race,” Sass said. “I pride myself on dog care. That’s the number one thing when you are dealing with sled dogs, you are dealing with many animals. The better you take care of them, the more you are going to get out of them, the better race you are going to have.”

The Lake Minnetonka Klondike Derby starts on Saturday, Feb. 8, at Lord Fletcher’s Old Lake Lodge, 3746 Sunset Drive, in Spring Park, where the public can meet the mushers and watch the sled dogs go through their veterinary checks, which include checking out the dog’s feet, seeing if they are well hydrated and checking the dog’s heart.

The eight-dog, 40-mile race will leave from Excelsior’s Water Street at 10 a.m. (the opening ceremony is at 9:30 a.m.) on Sunday, Feb. 9. The course will run along Lake Minnetonka’s shoreline through Deephaven, Wayzata, Orono, Mound and more communities before returning to Excelsior.

There are 42 mushers signed up to compete in the race, coming from Alaska, Canada and the Midwest, including several from Minnesota.

“She (Hway) just called me and she said, ‘Bill we need to do a race on Lake Minnetonka’, I said ‘Let’s go,’” Damberg recalls, noting they started discussing the idea about two and half years ago.

In the 1930s, Excelsior held Klondike Day, which featured a dog derby where kids hitched their dog up to whatever sled they had and raced around the lake, as well as an ice princess and queen, a snow modeling contest, ski races and a skating party, according to the Klondike Dog Derby website.

Dog races came back to Excelsior in the 1970s, when the Greater Excelsior Area Chamber of Commerce sponsored races with the North Star Sled Dog Club. The races started and finished in The Commons in Excelsior, with teams racing out to Big Island and around Smith Bay and Lafayette Bay, the website says.

Damberg and Hway work together at Damberg’s store in Excelsior, Brightwater Clothing & Gear. They both grew up in northern Minnesota where they saw sled dog races.

Damberg hopes the Lake Minnetonka Klondike Derby will help folks enjoy the interesting local history and get out of the house during the winter. 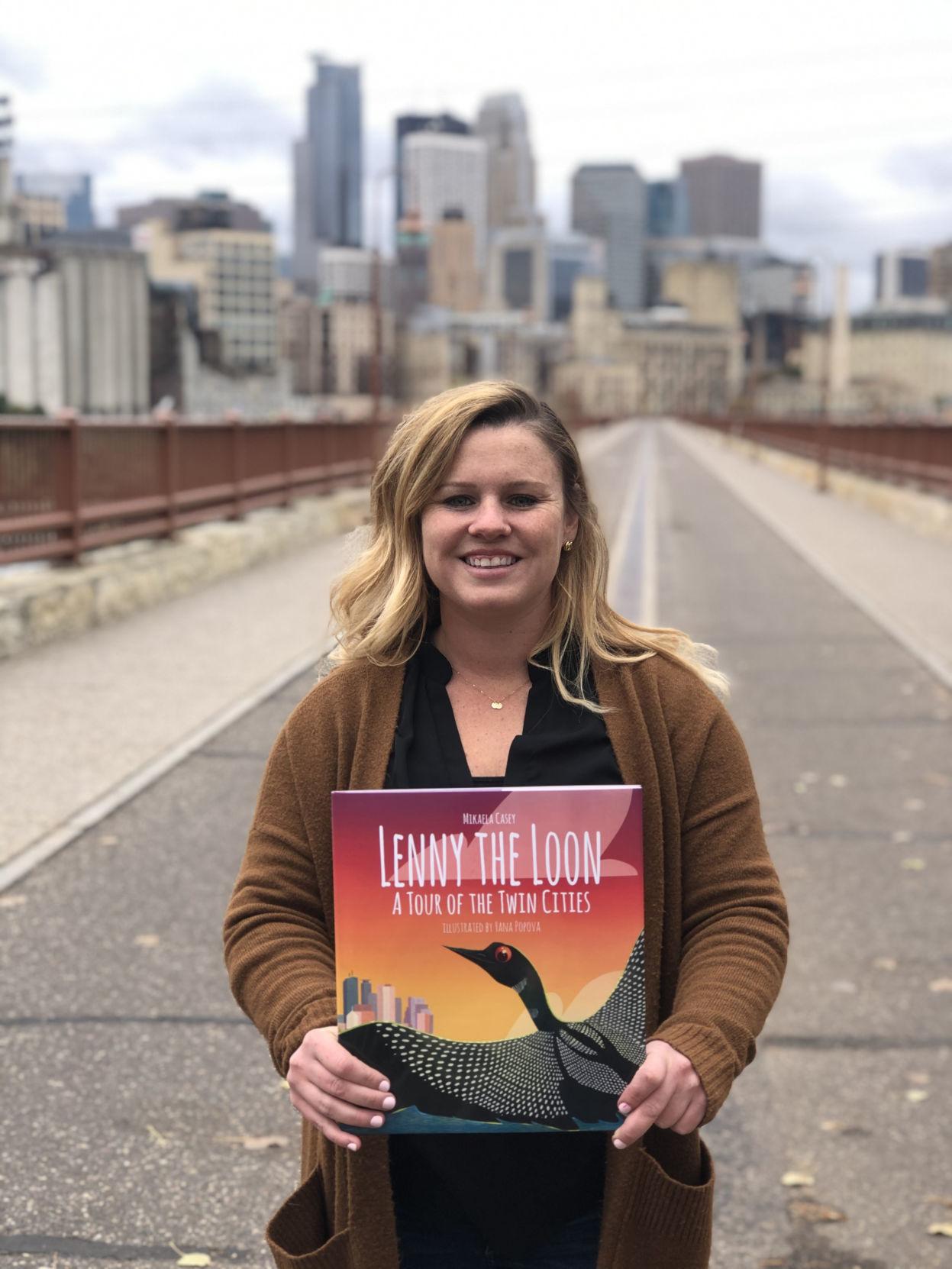 Mikaela Casey, who graduated from Mound Westonka High School in 2008, has written her second children’s book. 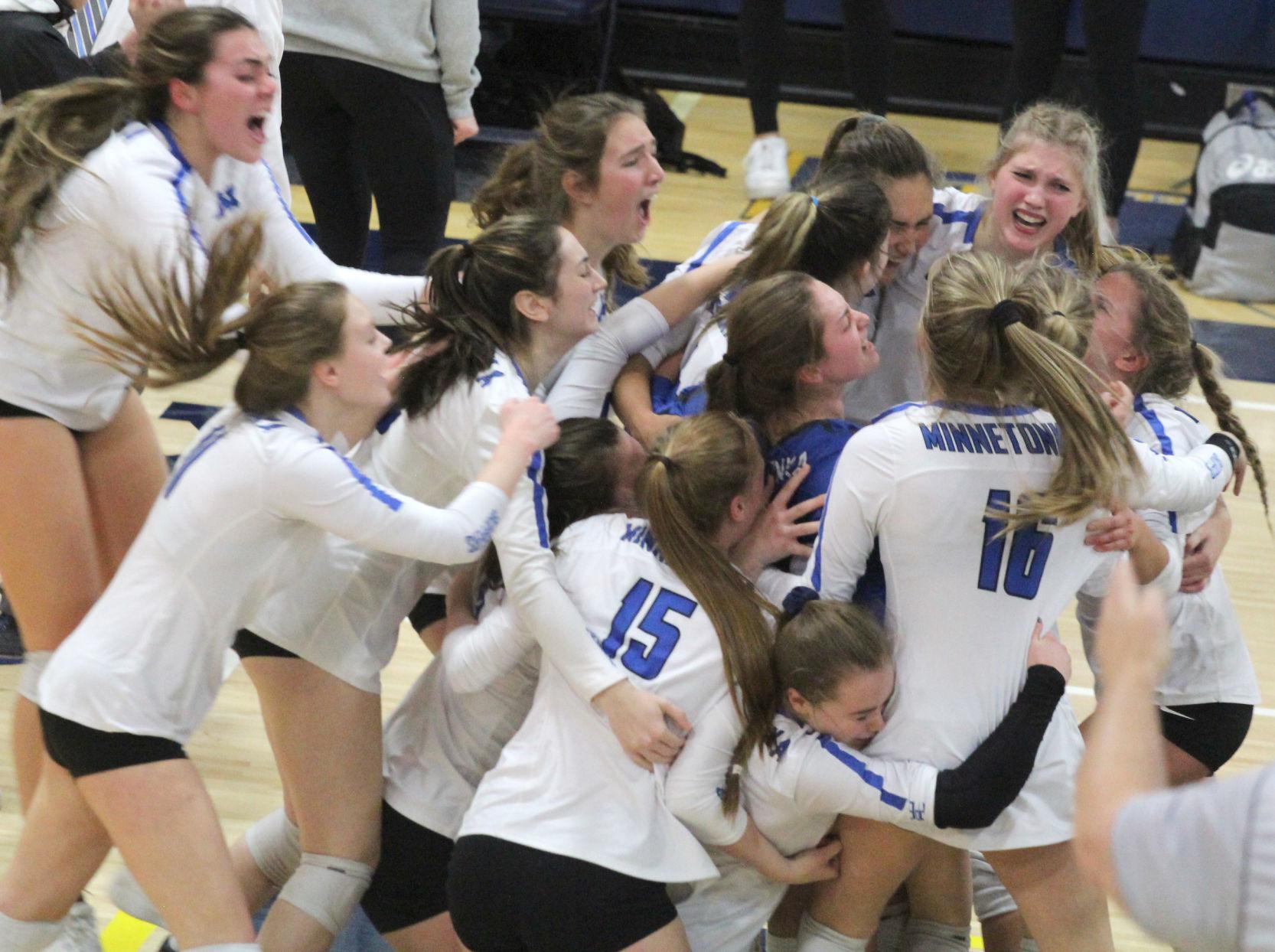 Minnetonka players mob senior Skyler Germann after the final point hit the floor, a 3-2 win over Chaska in the Section 2AAA championship Nov. 2 at Prior Lake High School.