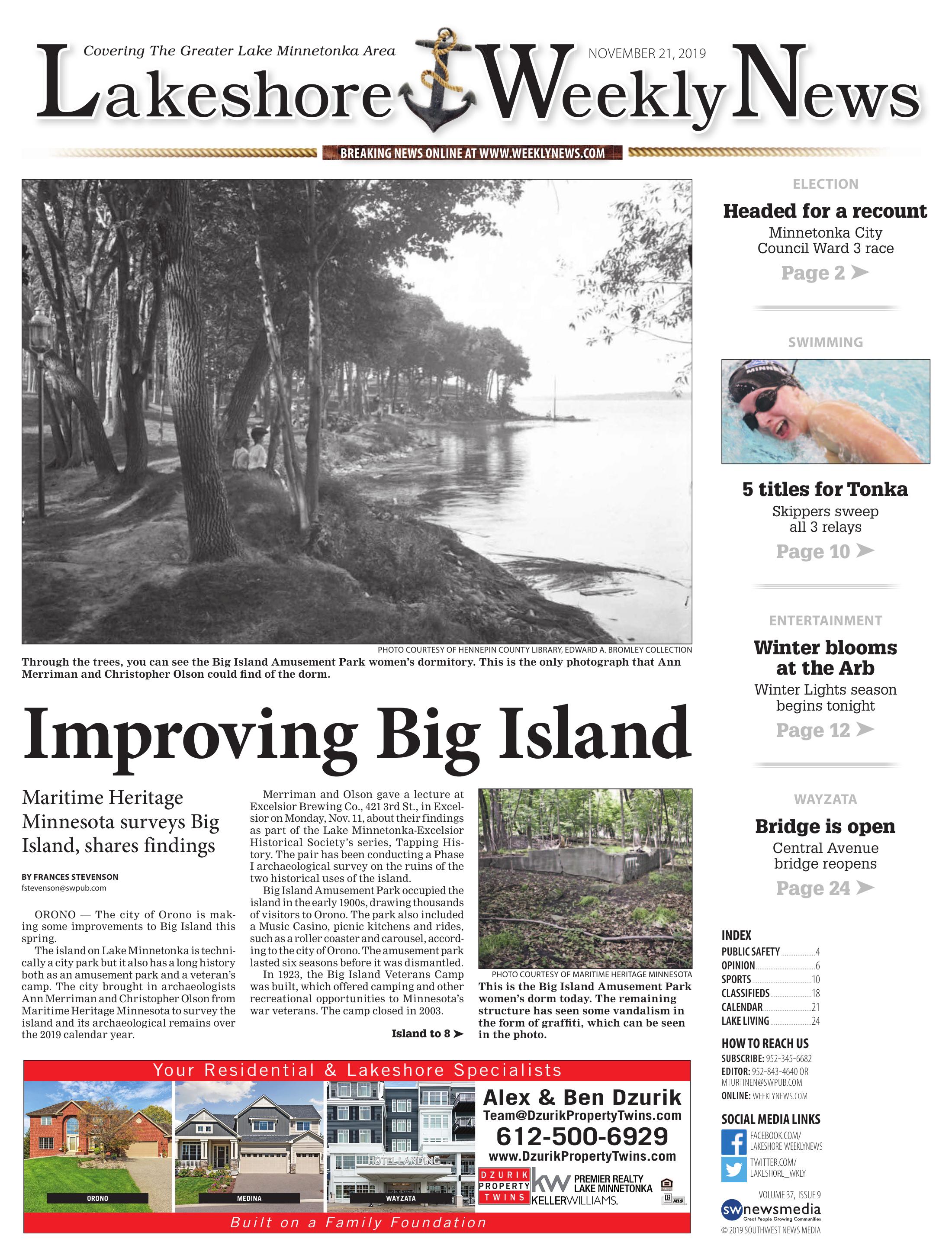 Through the trees, you can see the Big Island Amusement Park women’s dormitory. This is the only photograph that Ann Merriman and Christopher Olson could find of the dorm.

This is the Big Island Amusement Park women’s dorm today. The remaining structure has seen some vandalism in the form of graffiti, which can be seen in the photo.

A large crowd listens as Ann Merriman and Christopher Olson talk about their work surveying Big Island in Orono.

Ann Merriman and Christopher Olson found silt traps from the Big Island Amusement Park’s water management system, including one that was mostly intact.

ORONO — The city of Orono is making some improvements to Big Island this spring.

The island on Lake Minnetonka is technically a city park but it also has a long history both as an amusement park and a veteran’s camp. The city brought in archaeologists Ann Merriman and Christopher Olson from Maritime Heritage Minnesota to survey the island and its archaeological remains over the 2019 calendar year.

Merriman and Olson gave a lecture at Excelsior Brewing Co., 421 3rd St., in Excelsior on Monday, Nov. 11, about their findings as part of the Lake Minnetonka-Excelsior Historical Society’s series, Tapping History. The pair has been conducting a Phase I archaeological survey on the ruins of the two historical uses of the island.

Big Island Amusement Park occupied the island in the early 1900s, drawing thousands of visitors to Orono. The park also included a Music Casino, picnic kitchens and rides, such as a roller coaster and carousel, according to the city of Orono. The amusement park lasted six seasons before it was dismantled.

In 1923, the Big Island Veterans Camp was built, which offered camping and other recreational opportunities to Minnesota’s war veterans. The camp closed in 2003.

City Administrator Dustin Reif told Lakeshore Weekly News the city conducted the study to see if anything needed to be added to the Big Island Master Plan.

Merriman and Olson conducted a Phase I study over 2019 to determine the presence or absence or archaeological resources in the area. A Phase I study means the pair could only dig up a small amount of soil and 3D scan the structures they found, they explained at the Tapping History event on Nov. 11.

Reif told the paper, the city used the Phase I survey to apply for a grant through the Minnesota Department of National Resources to make improvements on Big Island. The city received the grant of $200,000.

The city started using the grant money in October to do more archaeological survey work through its engineering firm, Bolton and Menk, which has in-house archaeologists.

Public Works Director Adam Edwards described the survey work as completing the Phase I survey. He said the Maritime History Minnesota group primarily studied findings around the veteran’s camp and the amusement park and this survey will look for findings pre-dating and following the camp and park.

The grant will also be used to upgrade trails to ADA standards and install bathrooms and a shelter. The survey will allow the city to install these improvements without affecting any archaeological findings, Edwards explained.

Bolton and Menk will return to its work on Big Island this spring. It is expected to finish around May 2020.

Lakeshore Weekly News asked Merriman and Olson a few questions via email about their work on Big Island. Here’s what they said.

What is the most interesting thing you found on Big Island?

Olson: “The survival of the foundation of the Music Casino, part of Big Island [Amusement] Park. Through research, we determined the probable GPS coordinates of the west wall of the casino and using our hand-held unit, located that spot on the ground; the foundation wall was just below the surface. Surface cleaning exposed the foundation and its layout as an archaeological feature and its dimensions confirm that the surviving blueprints and maps correctly depict the Music Casino’s design.”

Merriman: “I find infrastructure interesting in relation to archaeological sites. On Big Island, infrastructure is represented by several silt traps and smaller drains with associated clay drainage pipes that were used for water (and sewer) management for the amusement park. The survival of these structures represents the planning and engineering that was required to accommodate the successful operation of the park’s rides, bathrooms, employee living facilities and restaurant.”

What is the historical significance of the structures you’ve found?

Olson and Merriman: “The Big Island Amusement Park archaeological site represents a period of Minnesota’s history that was shaped by improvements in transportation, both waterborne and by rails. Since the Twin City Rapid Transit Company constructed the street railway system in the Twin Cities and its suburbs — the company developed the amusement park as a destination to increase ridership on their trolleys and steamboats. The TCRT kept the streetcar and boat ticket prices low and affordable, so even the average worker and their family from the Twin Cities could enjoy a day at the lake. In the same way, the archaeological features associated with the Big Island Veteran’s Camp also represent an economical way for veterans to heal in the long term from their injuries. Initially, the men afforded a bunk at the camp in the early 1920s reaped the benefits of a quiet time to rest and relax.”

What are the next steps you will be doing with this survey?

In the conclusion of their report, Olson and Merriman note the remaining pieces of infrastructure from the Big Island Veteran’s Camp and Big Island Amusement Park require stabilization and conservation to remain in their current condition, noting the presence of vandalism and looting at the site.

The archaeologists also recommend the city add information kiosks and plaques explaining the history of infrastructure remaining for those visiting Big Island. 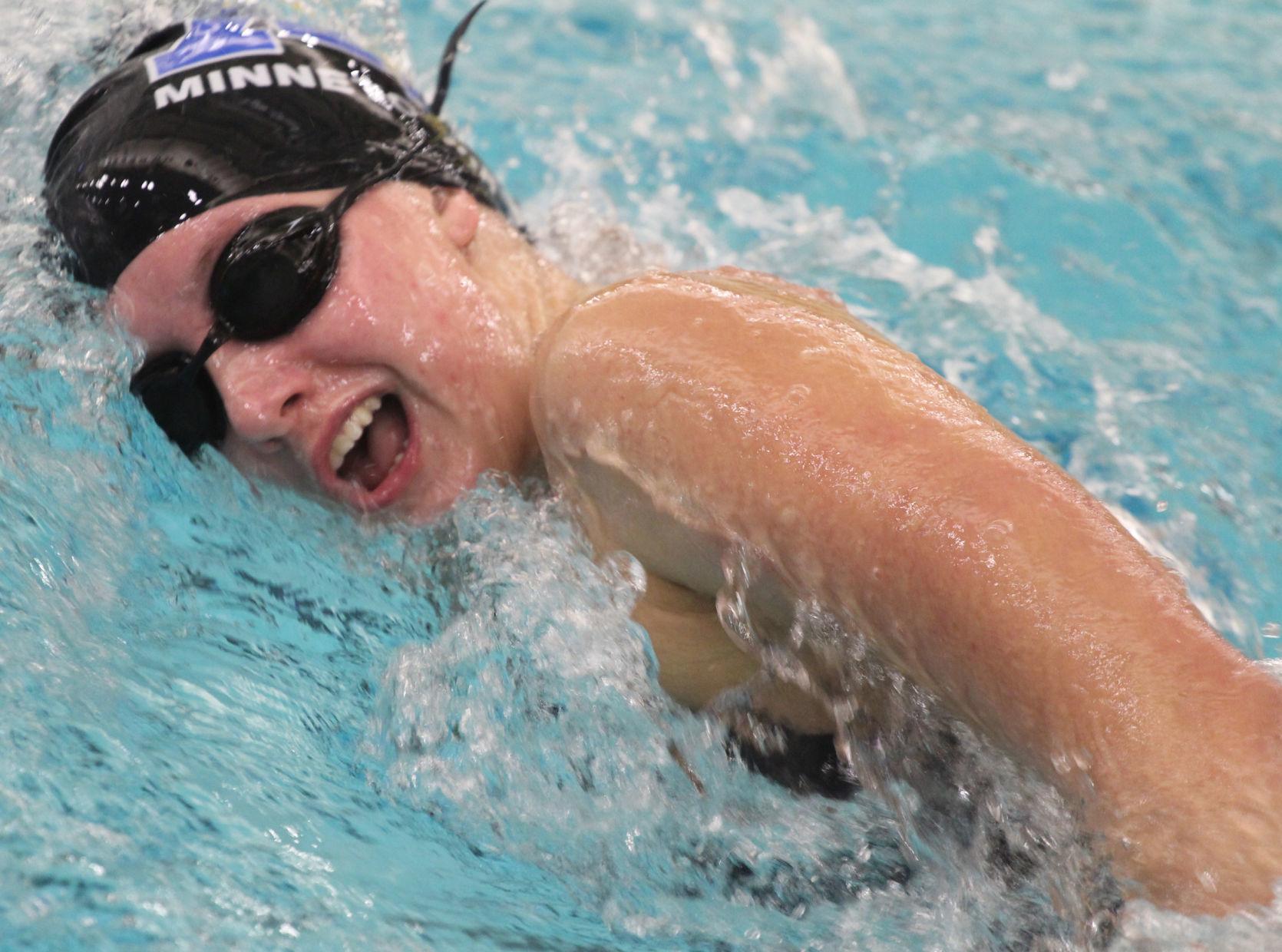 Senior Penelope Helm, state champion in the 400-yard freestyle relay, stood on the podium in the 200- and 500-yard freestyle, finishing fifth in each event for Minnetonka.