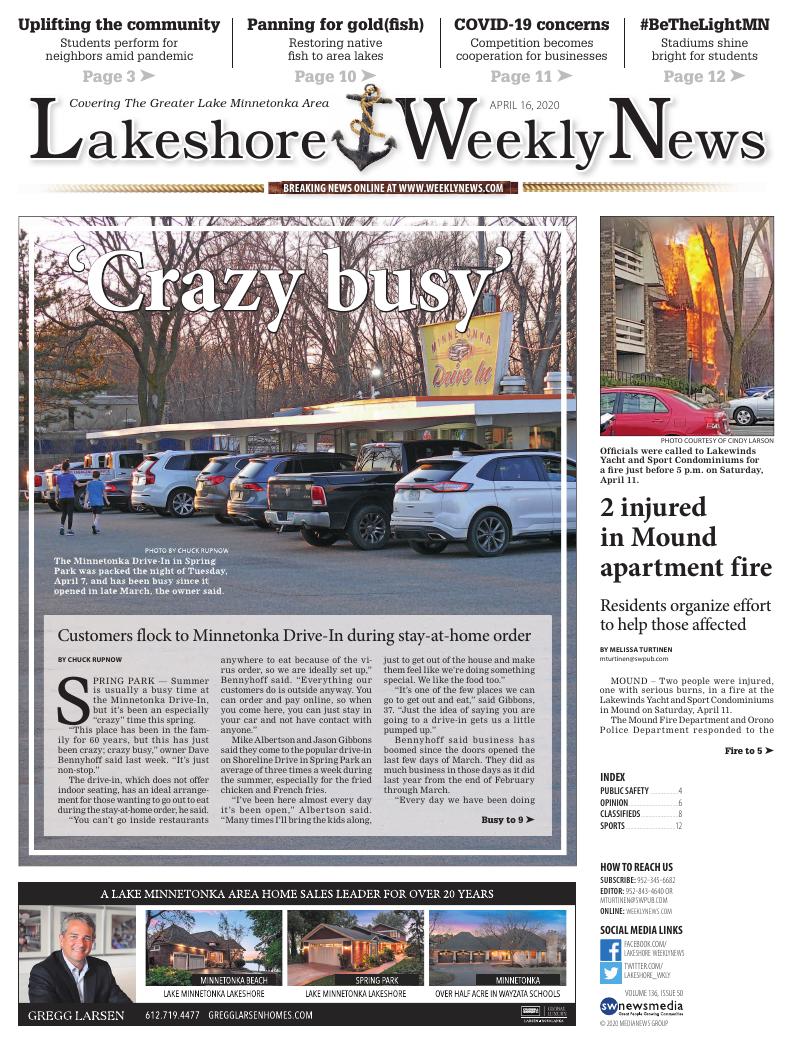 Business
top story
It's been 'crazy busy' at the Minnetonka Drive-In during stay-at-home order
By Chuck Rupnow
04.11.20
Photo by Chuck Rupnow

SPRING PARK — Summer is usually a busy time at the Minnetonka Drive-In, but it’s been an especially “crazy” time this spring.

“This place has been in the family for 60 years, but this has just been crazy; crazy busy,” owner Dave Bennyhoff said last week. “It’s just non-stop.”

The drive-in, which does not offer indoor seating, has an ideal arrangement for those wanting to go out to eat during the stay-at-home order, he said.

“You can’t go inside restaurants anywhere to eat because of the virus order, so we are ideally set up,” Bennyhoff said. “Everything our customers do is outside anyway. You can order and pay online, so when you come here, you can just stay in your car and not have contact with anyone.”

Mike Albertson and Jason Gibbons said they come to the popular drive-in on Shoreline Drive in Spring Park an average of three times a week during the summer, especially for the fried chicken and French fries.

“I’ve been here almost every day it’s been open,” Albertson said. “Many times I’ll bring the kids along, just to get out of the house and make them feel like we’re doing something special. We like the food too.”

“It’s one of the few places we can go to get out and eat,” said Gibbons, 37. “Just the idea of saying you are going to a drive-in gets us a little pumped up.”

Bennyhoff said business has boomed since the doors opened the last few days of March. They did as much business in those days as it did last year from the end of February through March.

“Every day we have been doing about two or three days’ worth of business that we normally would have had in the summer,” he said.

The busyness did cause a bit of a stir when someone posted social-distancing concerns online about the number of customers at the drive-in. It caused a large volume of calls to local officials and even a visit from the police, Bennyhoff said.

“We had everything posted, but we can’t control everybody’s life,” he said, adding that staff members were in the parking lot sanitizing items, tables were turned so they could not be used, and staff was reminding people about keeping appropriate distances.

“We are right next to the (Dakota Rail Regional) trail and there were so many, mostly kids, just coming off the trail,” Bennyhoff said. “We are doing the best we can. The police understood and even said they’d been eating here all the time.”

Bennyhoff said the business is in contact with health department officials on an almost daily basis.

“We are so thankful for the loyal customers we have,” he added. “It kind of reminds me of the 60s, when families would come to the drive-in and have their meal in their cars.”

Marco Brunswick, while recently in a long line of vehicles at the Dairy Queen in Navarre, said he and his family are enjoying the “new normal” of going through drive-thrus for meals.

“We usually go to a restaurant and sit down, which has its benefits,” he said. “But the kids like the drive-thrus; getting a meal and eating in the van. We don’t do this very often, so this is a treat. It kind of reminds me of when I was a kid and getting a burger and fries and then taking a big gallon of root beer home.

“I didn’t expect it to be this busy, but I guess people like getting out during this time,” Brunswick said. “I know most businesses are hurting, so it’s nice to see some busy and it’s a way to support them as best we can.”

Approximately 60-70 residents are displaced by the April 11 fire. The American Red Cross is helping them.

Fire trucks blocked Wilshire Boulevard in Mound at 6:30 p.m. on Saturday, April 11, as crews battled a fire at the Lakewinds Yacht and Sport Condominiums.

MOUND – Two people were injured, one with serious burns, in a fire at the Lakewinds Yacht and Sport Condominiums in Mound on Saturday, April 11.

The Mound Fire Department and Orono Police Department responded to the apartment complex at 4387 Wilshire Blvd. just before 5 p.m. after a 911 caller said two apartments were on fire on the second and third floors, later saying the fire was in unit No. 301 and one person was still inside the apartment, a news release says.

A firefighter assists a woman off the balcony of an apartment the evening of the fire.

The evacuation of the apartment complex was already underway when officials arrived about 3 minutes after being dispatched, the release said. The man in apartment No. 301 had been assisted and/or rescued by a neighbor and Mound firefighters used a ground-extension ladder to rescue a woman from her third-floor apartment.

Cindy Larson, who lives on the second floor of the building, said she heard the alarms going off and thought it was a false alarm until she opened her door and a neighbor was yelling from near the stairwell.

“I ran up to the third floor and a young man was pounding on the door trying to get the neighbor to open the door,” she told Lakeshore Weekly News on Sunday, April 12. “The hallway on the third floor was already filled with smoke. As I ran back downstairs, I knocked on all my neighbors’ doors yelling ‘Fire, get out!’”

Larson went back to her unit, where she and her boyfriend grabbed their keys, shoes and coats and headed outside. By then, the halls on the second floor were already filling up with “thick, dark smoke,” she said.

“It really was shocking how fast those halls filled up,” she said.

Officials were called to Lakewinds Yacht and Sport Condominiums for a fire just before 5 p.m. on Saturday, April 11.

All residents were accounted for by Mound fire and Orono police staff and fire crews “made a quick containment” of the fire, the fire department said. The fire was considered under control with overhaul starting at 6:36 p.m. and crews cleared the scene by about 11 p.m.

Two residents were injured and transported via ambulance to hospitals, the release said. One man had serious burn injuries and a second woman was transported to the hospital for evaluation for smoke inhalation. She was released after evaluation, while the status of the burn victim is unknown as of Sunday, April 12.

No firefighters or first responders were injured.

The preliminary cause determination is that the fire started in an apartment kitchen, the release said, noting the fire is still under investigation by the State Fire Marshal’s Office and the Mound Fire Department.

Damage from the fire was “substantial” to several units but contained to the front side apartment units. There was also heavy smoke damage in the third-floor hallways, the release said. Many other units were saved and had no noticeable damage.

Approximately 60-70 residents are displaced due to heavy smoke damage and lack of utilities in the center wing of the building, the release said. The American Red Cross is assisting with the needs of apartment residents.

After the fire was contained, a fireman escorted residents into their units to gather up essentials that they’d need, Larson said.

“We only got about seven minutes. It was very hectic,” she said, noting the fireman gave them a flashlight. “It’s hard to try to figure out what you need when you’re that distressed.”

Larson said they were “some of the lucky ones” because their unit “just sustained smoke damage.”

“I feel for the others who lost everything,” she added. She is now staying at a hotel in Long Lake and getting help from the Red Cross.

There is no estimate for how much damage was caused by the fire at the building, which is 50-plus years old and does not have a sprinkler system.

“A fire suppression system (sprinkler system) would have contained this fire to a single apartment unit and likely extinguished the fire in a small kitchen area,” the news release said.

Approximately 74 firefighters and 14 fire apparatus were assisting at the scene of the Mound fire, officials said.

Approximately 74 firefighters and 14 fire apparatus were assisting at the scene. The fire went to a fourth alarm for additional personnel and for firefighter safety, the release said.

Nichole Spiess, a resident of the Lakewinds Yacht and Sport Condominiums, started a Facebook group on April 12 to help residents who have been affected by the fire, with Spiess telling the paper the neighbors are a tight-knit group.

The page will be updated with information about the items residents need and where they can be donated.

"It’s going to evolve, but since we’ve all been cleaning out stuff anyway with no place to donate, I figured we can start here," Spiess wrote in the group. 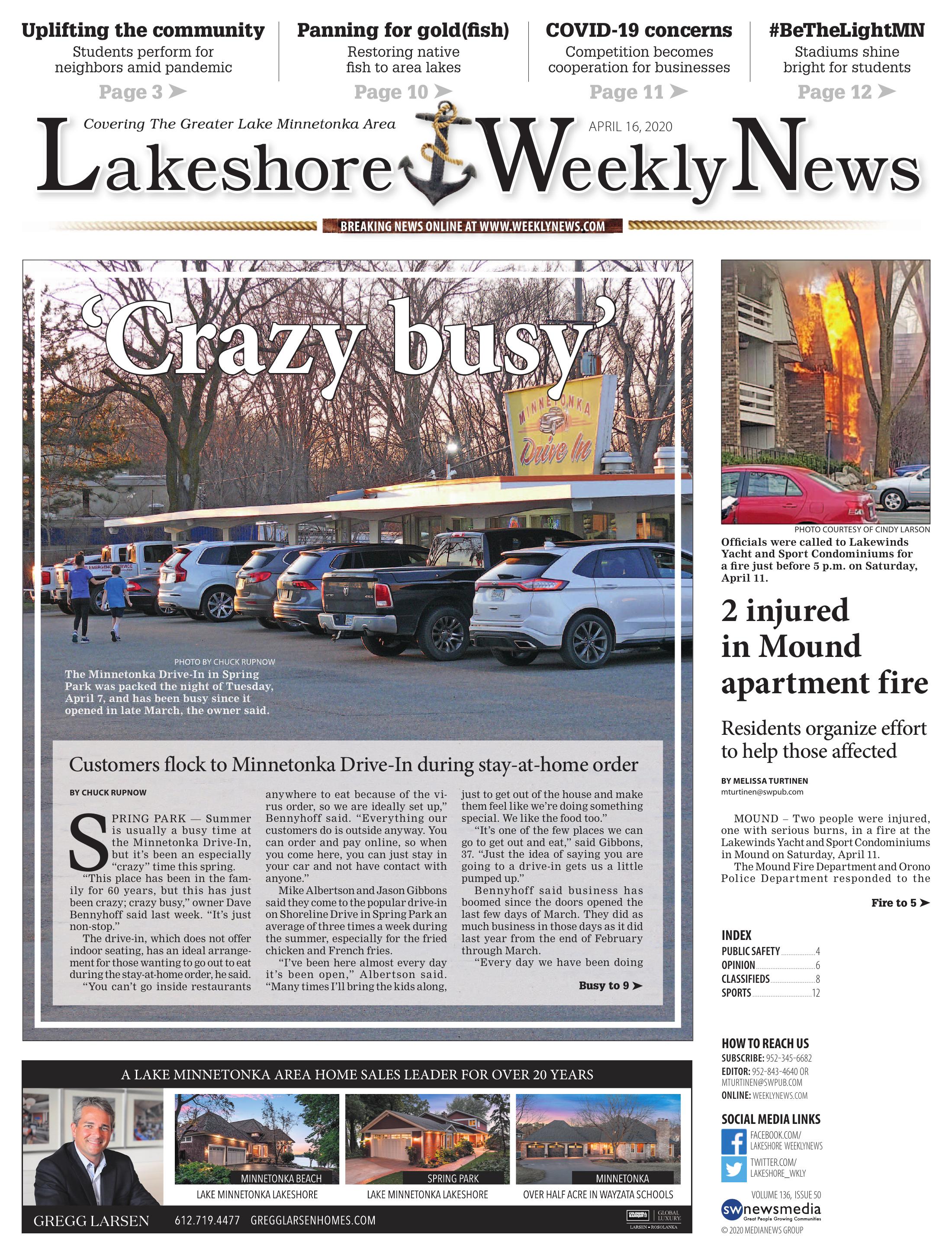