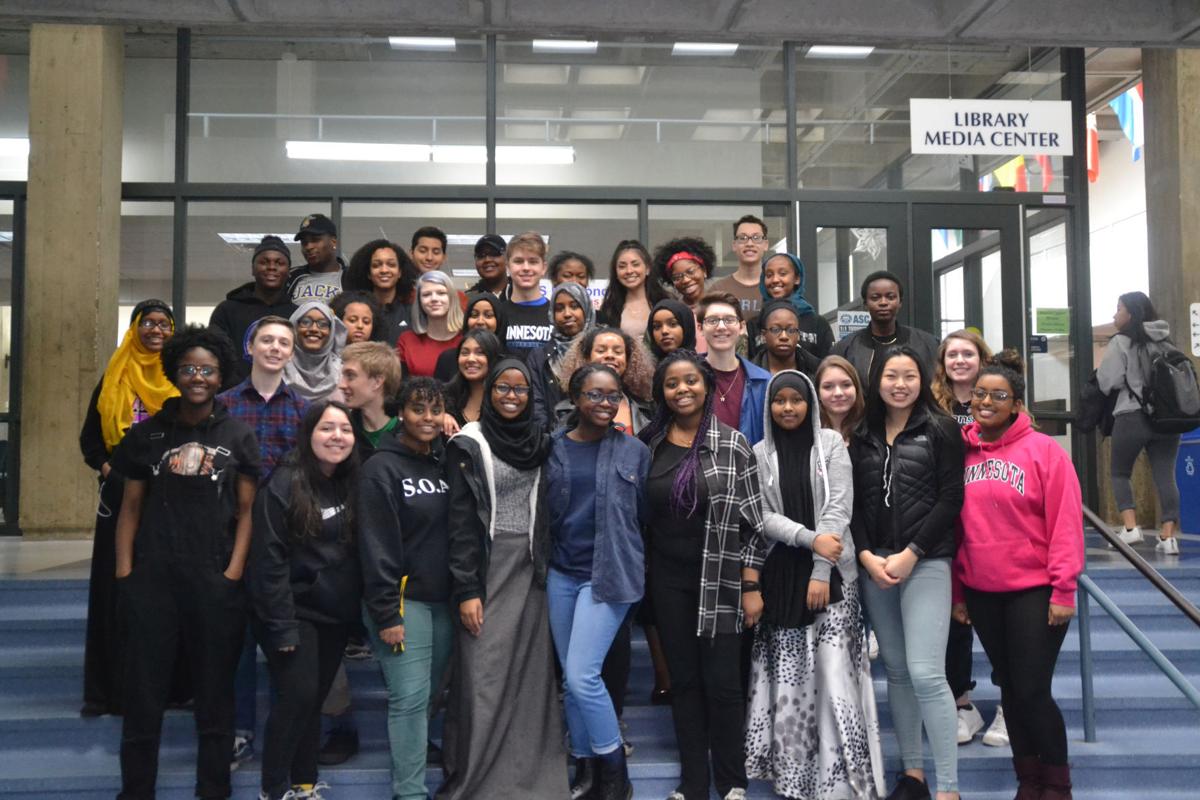 HHS Responds, a student group at Hopkins High School that focuses on the Rings of Culture. 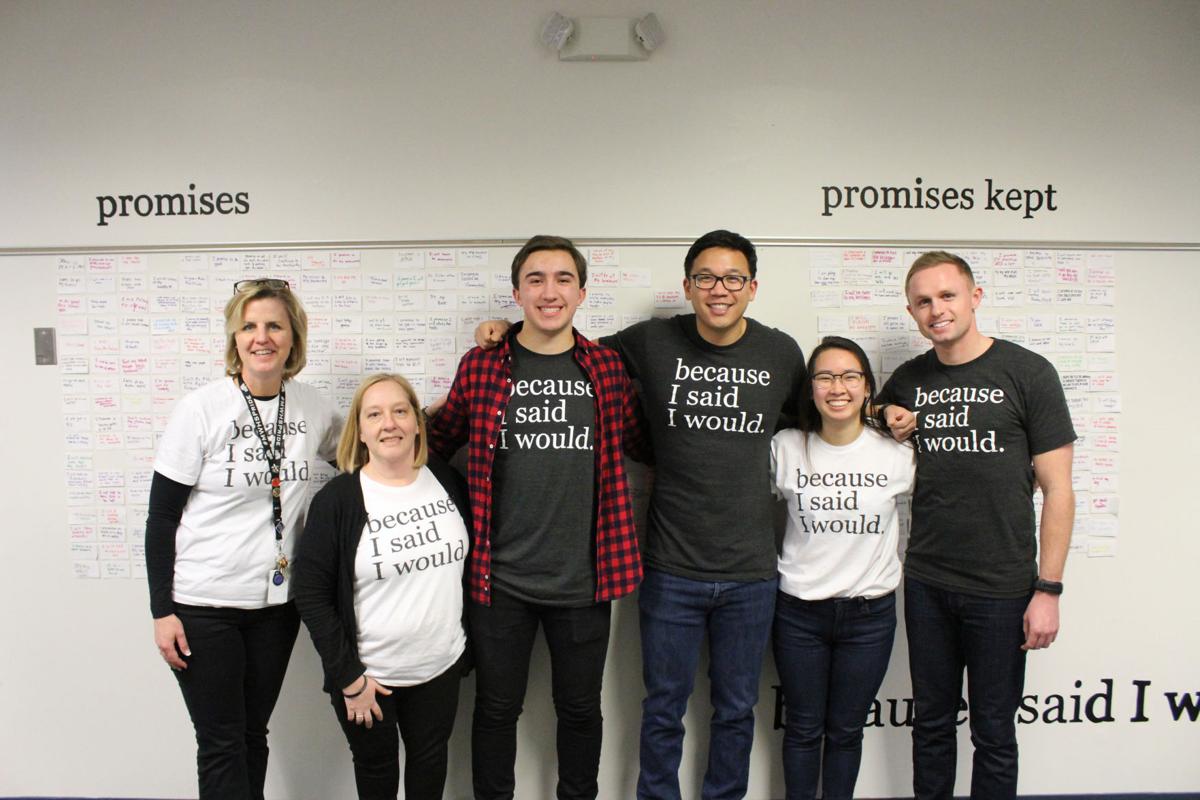 The promise wall that was unveiled in September as part of Mound Westonka’s because I said I would initiative. 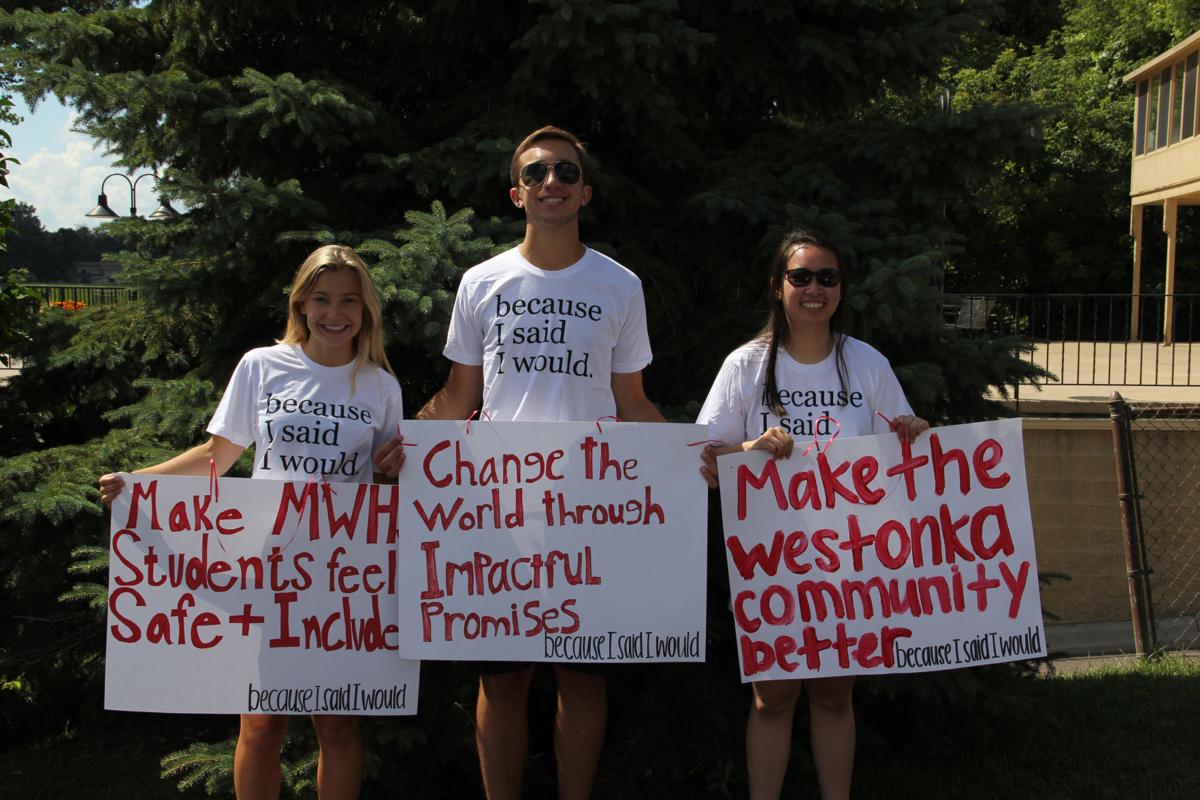 Promises Mound Westonka seniors have made as part of the because I said I would initiative. 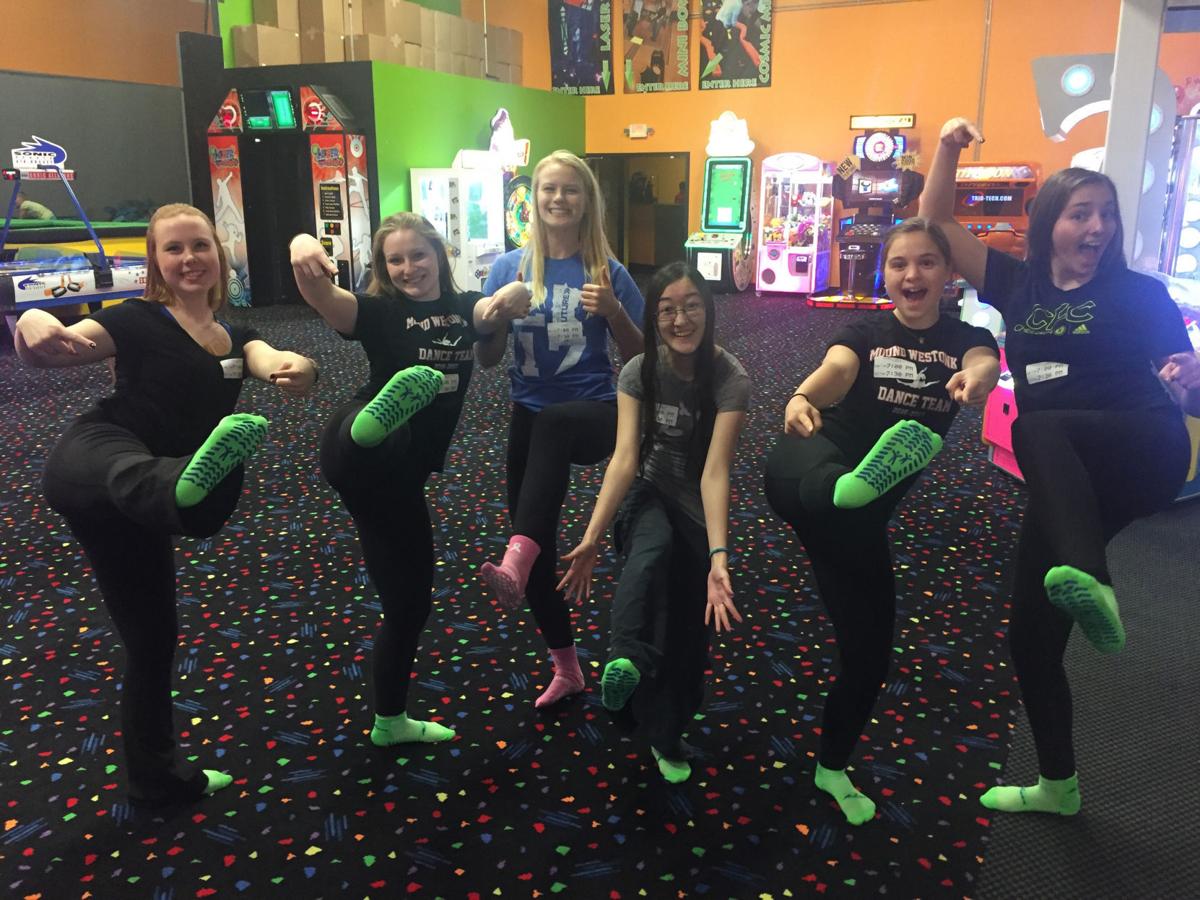 Members of the Harbor Group at Air Maxx Trampoline Park during one of their nights out. 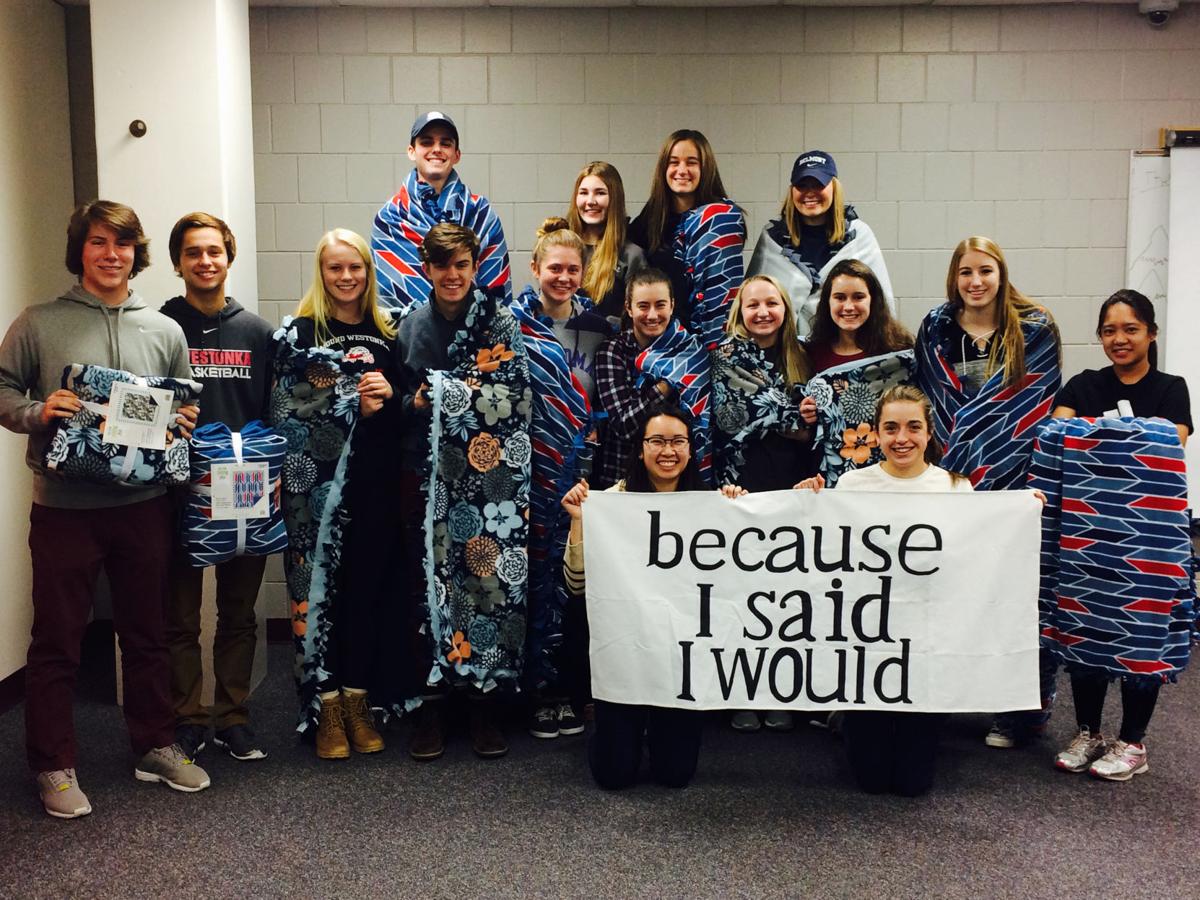 Fleece tie blankets that students assembled for families in need as part of the because I said I would initiative. 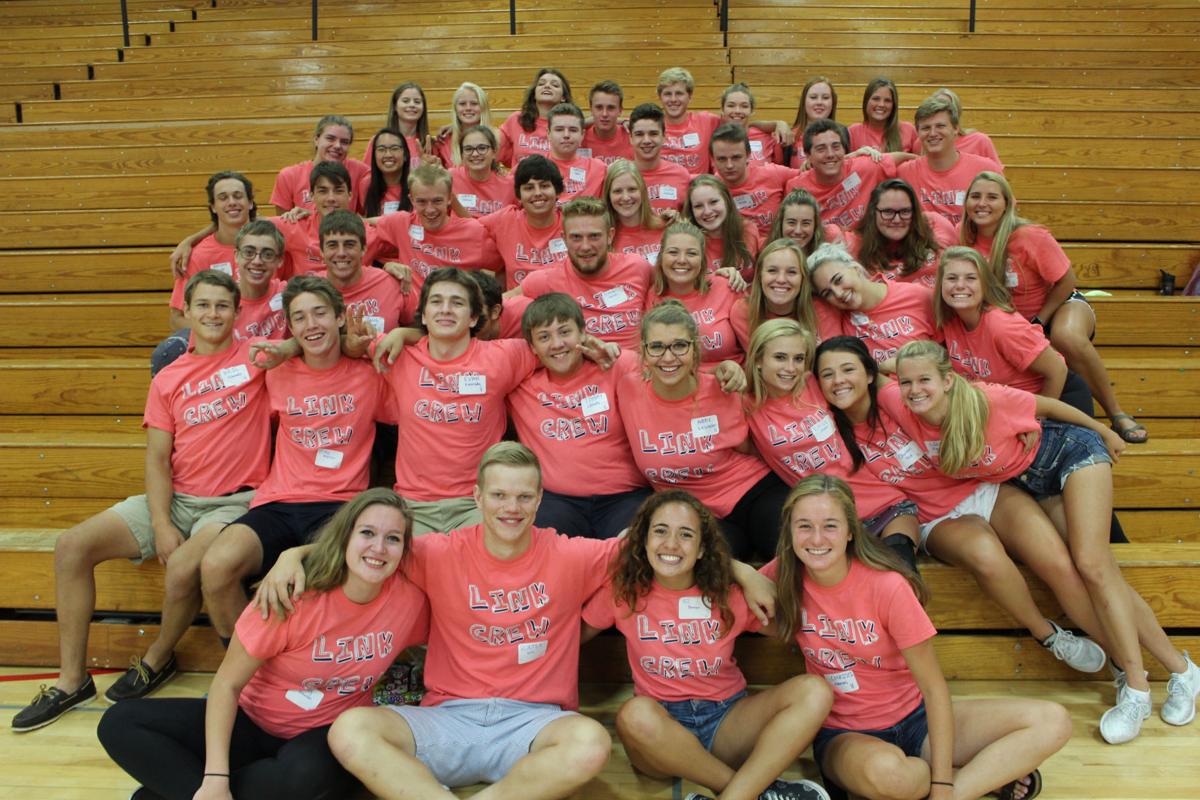 HHS Responds, a student group at Hopkins High School that focuses on the Rings of Culture.

The promise wall that was unveiled in September as part of Mound Westonka’s because I said I would initiative.

Promises Mound Westonka seniors have made as part of the because I said I would initiative.

Members of the Harbor Group at Air Maxx Trampoline Park during one of their nights out.

Fleece tie blankets that students assembled for families in need as part of the because I said I would initiative.

Editor’s note: This is the last of a three-part series.

As they are being passed their diploma, seniors at Wayzata, Minnetonka, Hopkins, Mound Westonka and Orono have the chance to reflect on the service, sense of community and positivity that they themselves have passed on to the people around them and down to grades below them.

These seniors across the Lake Minnetonka area have cultivated a legacy at their respective schools and communities that will linger even after they leave their communities to pursue their post-high school plans.

As described by founder La’Dajia Davis, HHS Responds is a group of culturally diverse students who come together to make Hopkins a more inclusive environment. Students in the club focus on the Rings of Culture, outlined by educator and speaker Sharroky Hollie.

Hollie talked about how culture is perceived at a surface level and differences between people are usually seen physically, such as the color of someone’s skin or how someone decides to dress. However, there are many rings of culture.

HHS Responds strives to promote these additional rings such as sexuality, gender, nationality and age.

Going off of the Rings of Culture model, HHS Responds has gotten gender neutral bathrooms in their school, hosted conversations with over 50 people in attendance and participated in community dialogue that promote diversity, such as “Let’s Talk About Race.”

They also put together “Music Mondays” in which students play modern cultural music from around the world according to different holidays and events.

“It is a really significant part of my life,” Davis said. “I wanted to create a platform for other passionate students to share their voices and to support those voices.”

Though Davis left Hopkins upon graduation, her vision will remain.

“I would say that I left HHS Responds with a passionate group of leaders for the next school year,” she said. “Those leaders have really grasped onto my intent and direction as a map for the future and to also support the incoming students.”

Mound Westonka seniors have also made a commitment to facilitate a positive, long-lasting and cohesive culture at their school.

In his graduation speech, Principal Mark Mcllmoyle pointed to three student groups who have left their legacy: because I said I would, Harbor Group and Link Crew.

A nonprofit organization, because I said I would hopes to better the world through promises made and kept with promise cards. This past academic school year, it was adopted by Mound Westonka’s DECA group.

In September, student leaders held a ribbon-cutting ceremony to introduce a “promise wall” in the high school. There are two sides of the promise wall: a “promises” side and a “promises kept” side. Students and staff members write promises on promise cards to place on the left side of the wall. When that promise is fulfilled, the card is moved to the right side of the wall.

According to an article on the Mound Westonka website, “People were excited to make commitments to not only better themselves but also to improve the community around them. The DECA students’ goal in this project is to help people leave the world a tiny bit better than how they found it.”

Promises can be made and fulfilled collectively, such as promising to pack 340 rescue bags for local emergency personnel or making fleece tie blankets for families in need.

Promises can also be made on a small scale, such vowing to make all Mound Westonka students feel safe and included.

A video that was played during Mound Westonka’s graduation ceremony also highlighted the Harbor Group, a club formed with the intent of creating better student culture at Mound Westonka.

“The main vision from the students was to bring together people who wouldn’t normally think about being friends and to be there for anyone who needed a friend,” the video said. “Seniors joined this group because they wanted to have an impact on the underclassmen at our school.”

Another influential group that had a big impact on underclassmen was Link Crew, a program that allows eighth-and ninth-graders to receive support and guidance from juniors and seniors.

According to an article on the Link Crew website, the program was created to facilitate school spirit, integrate new students into a positive school community and help build academic success.

In this way, seniors spread the positivity that they gleaned from their four years at Mound Westonka to underclassmen who will be carrying on that same attitude throughout their time at school.

In his graduation speech, Orono Principal Dave Benson applauded the class of 2017 for providing the strong leadership that paved the way for many impressive accomplishments in arts, athletics and academics. These accomplishments set a high bar for students following in their footsteps, leaving a legacy of determination and ambition at Orono High School.

Seniors from Mound Westonka, Wayzata, Minnetonka, Hopkins and Orono all boast a plethora of impressive academic, artistic and athletic achievements upon graduation, made possible by a commitment to the four A’s that Principal Mark Mcllmoyle addressed during the Mound Westonka graduation ceremony.

Even as they move on from high school, schools from across the Lake Minnetonka region have embraced the four A’s. From engaging with art to give back to the community through Senior Serve to creating a program that pairs varsity athletes with younger athletes through the Legacy Project to creating a cultural club that changes school culture through various activities in HHS Responds, seniors have left their legacy through arts, athletics, activities and academics, fulfilling the coveted four A’s.