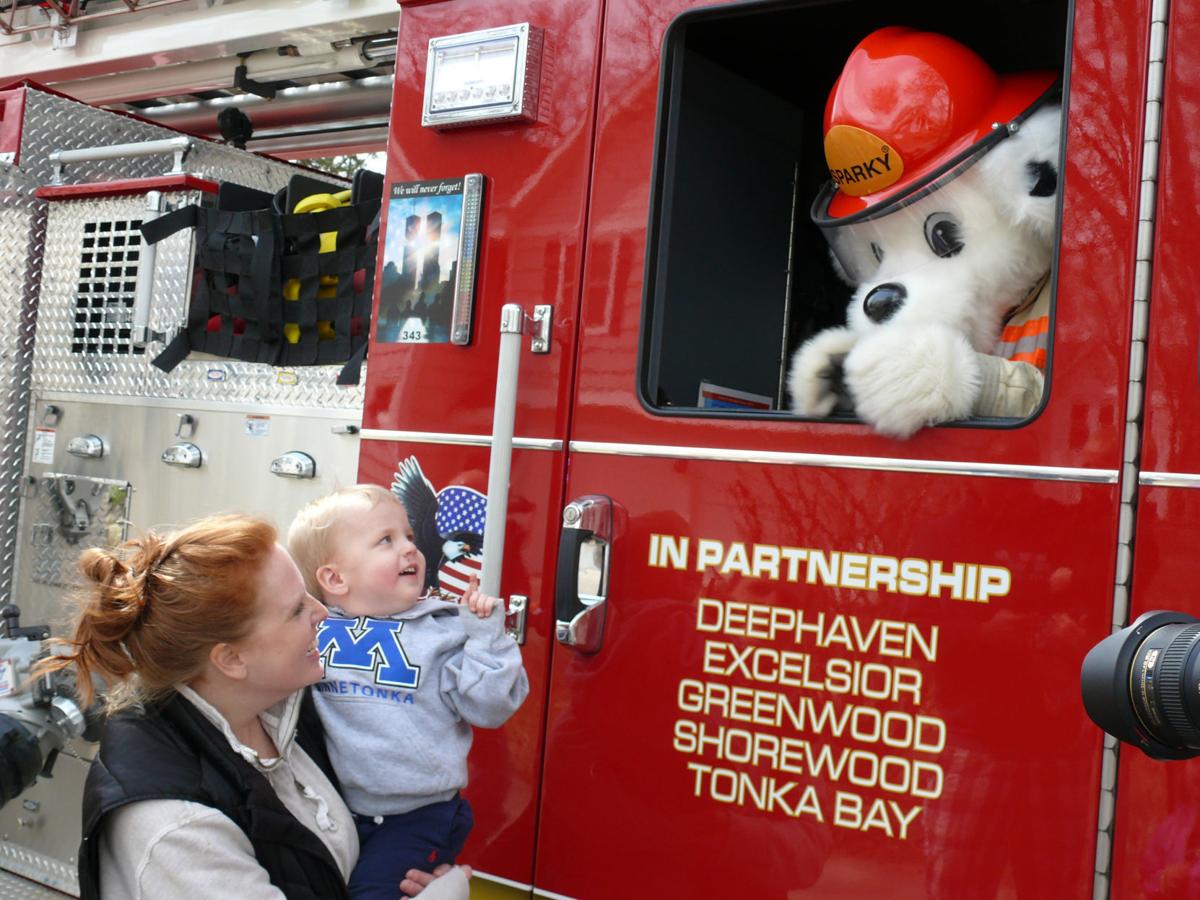 Charlie Szlachtowski, in his mom’s arms, got to meet “Sparky” when the birthday patrol stopped by his house on Monday, April 20, to celebrate his second birthday. 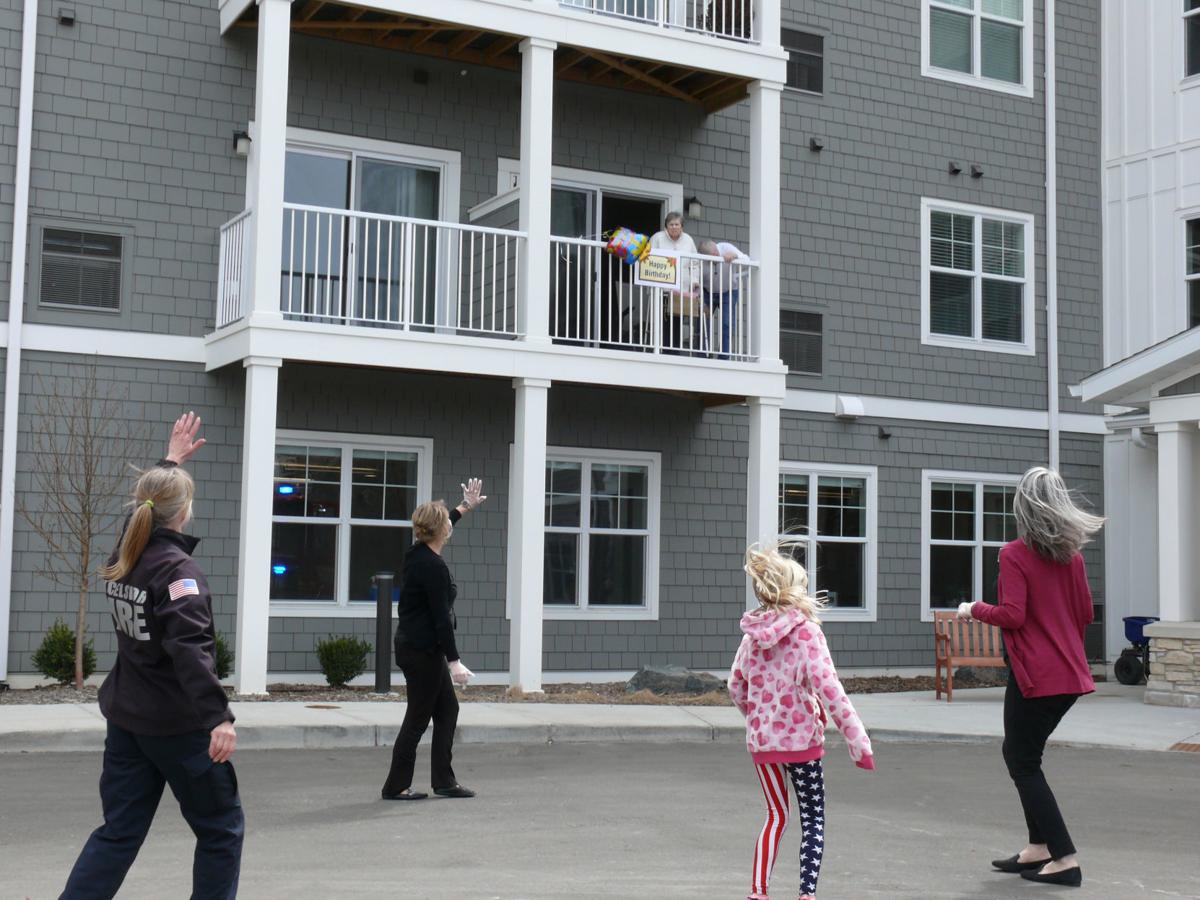 The birthday patrol made a stop at The Waters in Excelsior on Monday, April 20. Seven residents, between age 74 and 87, are celebrating a birthday in April. 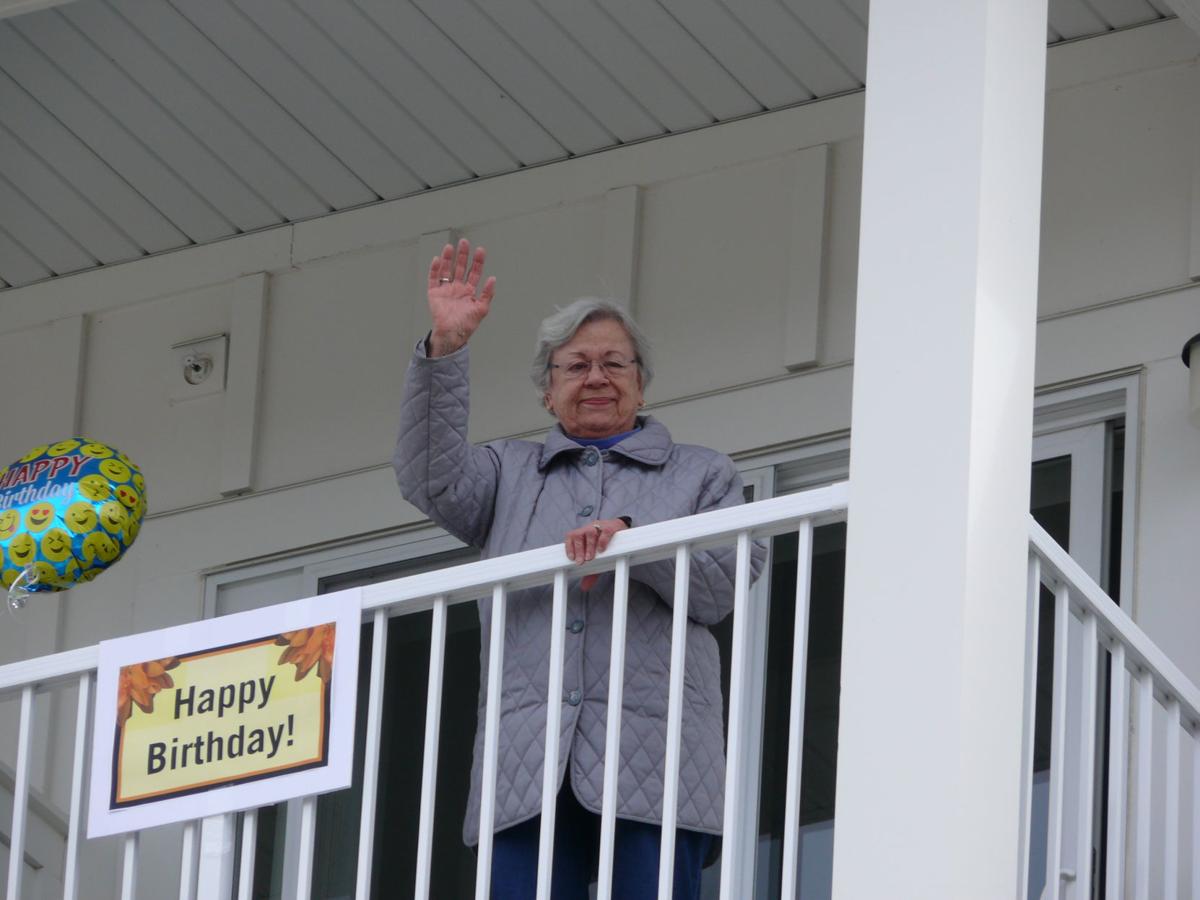 Edy Peterson, a resident of The Waters in Excelsior, waves from her balcony. The Excelsior Fire and Police Birthday Patrol paid a visit to residents celebrating their birthdays this month.

Charlie Szlachtowski, in his mom’s arms, got to meet “Sparky” when the birthday patrol stopped by his house on Monday, April 20, to celebrate his second birthday.

The birthday patrol made a stop at The Waters in Excelsior on Monday, April 20. Seven residents, between age 74 and 87, are celebrating a birthday in April.

Edy Peterson, a resident of The Waters in Excelsior, waves from her balcony. The Excelsior Fire and Police Birthday Patrol paid a visit to residents celebrating their birthdays this month.

Peterson, 85, and Charlie were both celebrating birthdays; Peterson at The Waters of Excelsior senior living complex, and Charlie at home with family.

A fire truck, police units and other emergency vehicles participated Monday, April 20, in birthday celebrations, something that has become more common during the COVID-19 seclusion effort.

Charlie, whose birthday was Monday, appeared a bit apprehensive at first when his mother, Megan Szlachtowski, carried him over to the fire truck as other emergency vehicles with flashing lights and a few sirens lined up on Maple Street.

“I saw on Facebook that the fire department and police were talking about ways to celebrate birthdays in today’s environment, and I saw that they were offering parades. We thought it would be a great idea,” said Megan.

“It’s been quite challenging to keep them occupied,” she added, referring to children Gigi, 5, Jack, 4, and Charlie. “We’re happy that the fire trucks are going to help with that entertainment today.”

Steve Szlachtowski, Charlie’s father, said: “It beats a normal day for sure.”

Peterson was one of seven residents, between age 74 and 87, celebrating an April birthday at The Waters. She was thrilled about the display of emergency vehicles, as well as the music and dancing in the facility’s parking lot.

“It was great; really fun,” Peterson said after witnessing “the party” in the parking lot. “It was amazing. I didn’t expect there would be that big of a show for us, but I liked it.”

Numerous residents stood about on their balconies to take in the celebration, with balloons attached to railings of those who were celebrating a birthday.

“It’s not like the regular monthly birthday celebrations they have here,” Peterson said. “They usually do a really nice job here, but this was something special.”

Typically at The Waters of Excelsior, on the first Thursday of each month, residents celebrating a birthday are honored during a social hour in the community’s café.

But with people sheltering in place, the facility contacted the Excelsior Fire and Police Birthday Patrol for a special birthday program, according to facility officials.

Rescue vehicles from the Excelsior Fire District, South Lake Minnetonka Police and Deephaven Police Department were part of the celebration at The Waters.

“We are very excited that the Excelsior Fire and Police Birthday Patrol answered our request to expand their special program for kids to seniors as well,” said Beth Kuhlman, executive director of the facility, adding that the residents would “love the attention, not to mention the recognition of reaching another milestone in their lives.”

Curt Mackey, Excelsior fire chief, said the patrol “provides an opportunity to uplift spirits and give people a sense of calm that we are going to get through this, even though it might take a little longer than we had hoped for.

This particular birthday patrol will run from 10 a.m. to 3 p.m. every day until May 4, when the stay-at-home order is set to end. It is open to families with children turning ages 2-12 who live in within the Excelsior Fire District, which includes the cities of Deephaven, Excelsior, Greenwood, Tonka Bay and Shorewood.

More information and registration is available at excelsiorfire.org/fire-safety-articles/kids-area.

A number of other area emergency-response agencies are offering similar parades.

“One of the things we really didn’t do much before were the birthday parades,” said Minnetonka Police Sgt. Allen Ringate. “They put a kind of positive spin on things during this time. It’s a good thing to get out there and give a wave. It kind of makes us all feel good.”