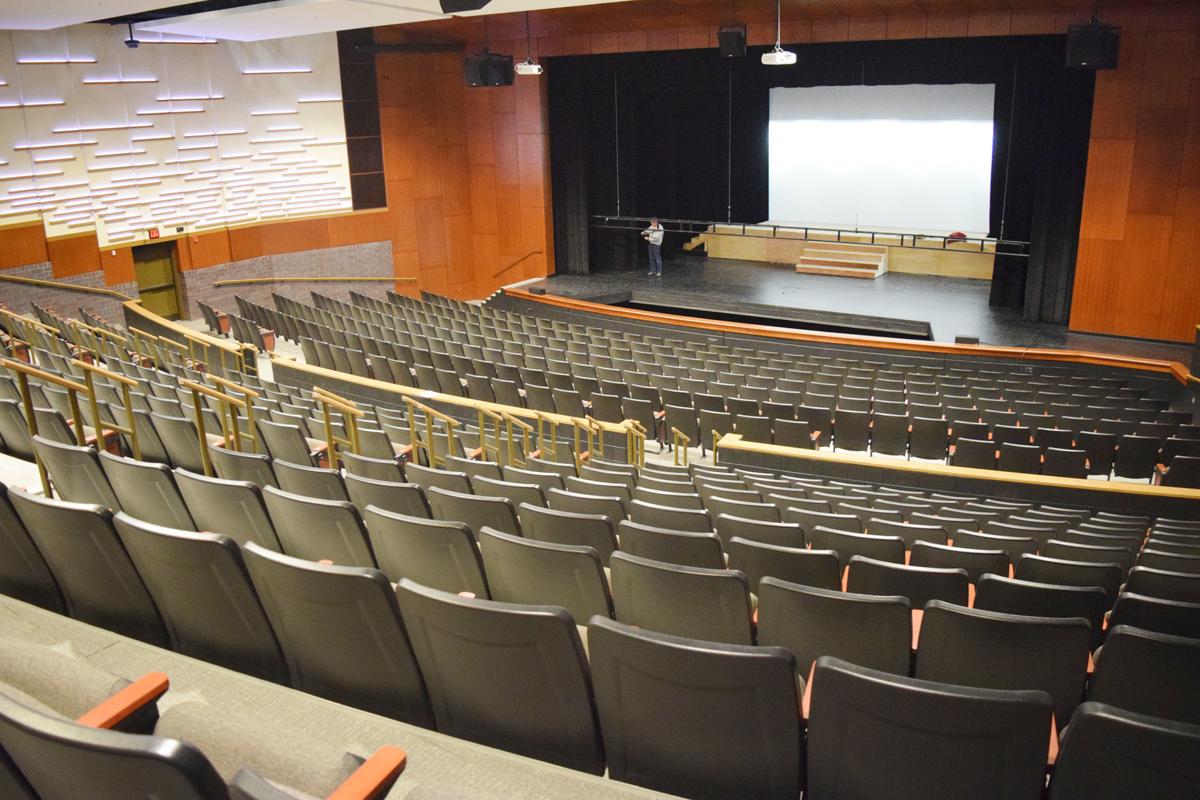 The auditorium at the new Westonka Performing Arts Center has 611 seats. 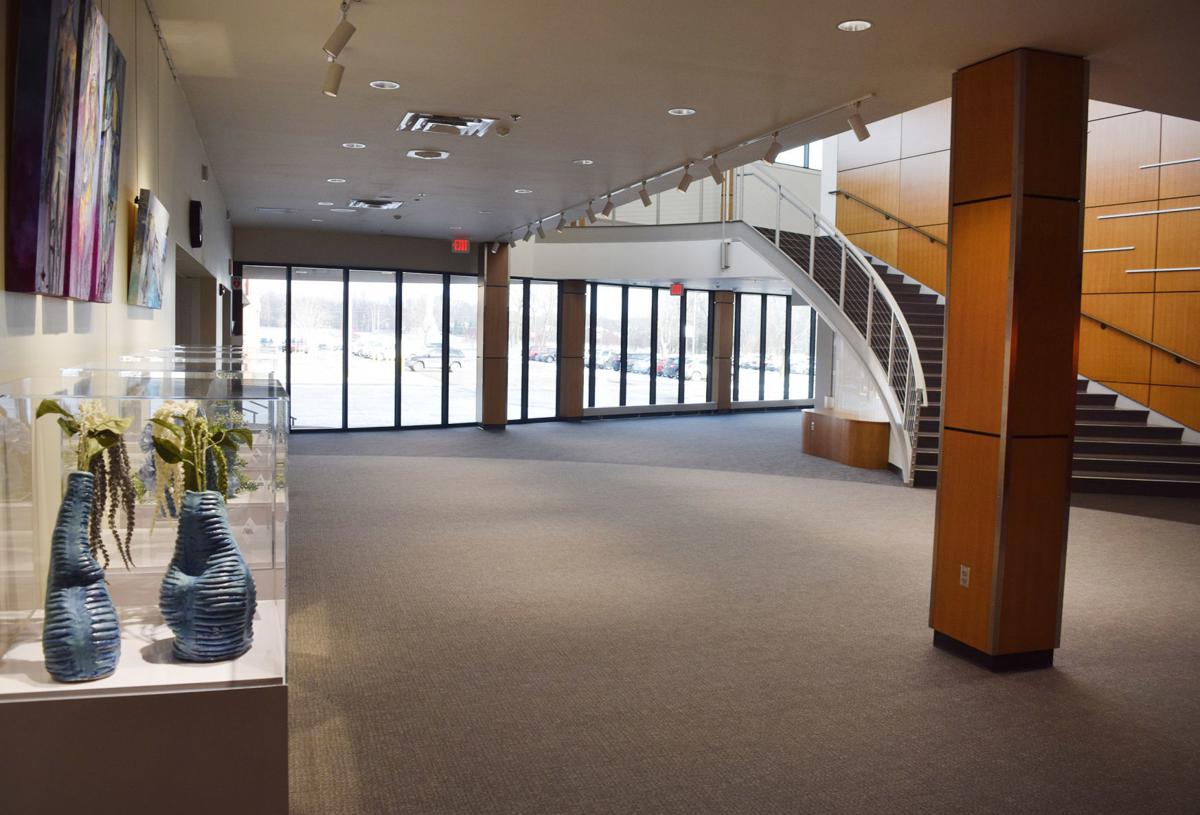 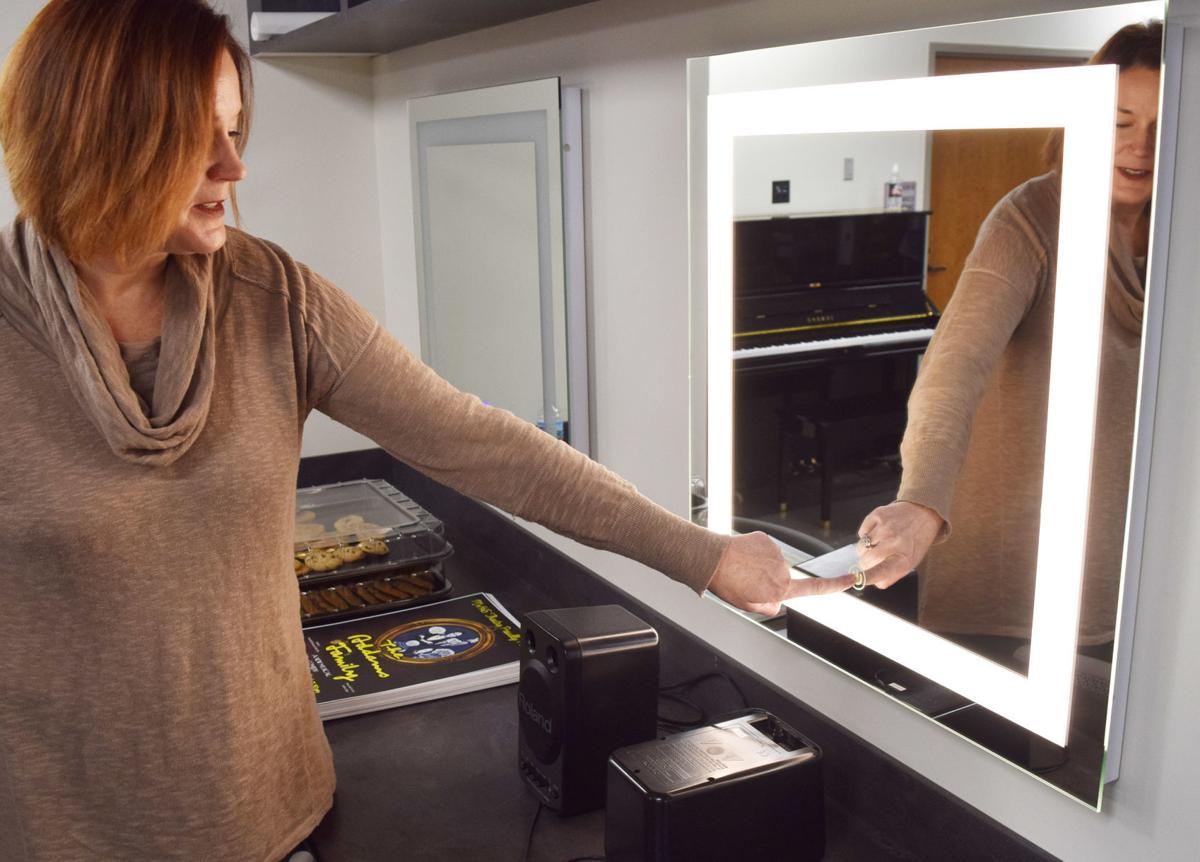 Westonka Performing Arts Center Coordinator Kelly Newell touches the power button on a new vanity mirror, one of a dozen in the dressing room. 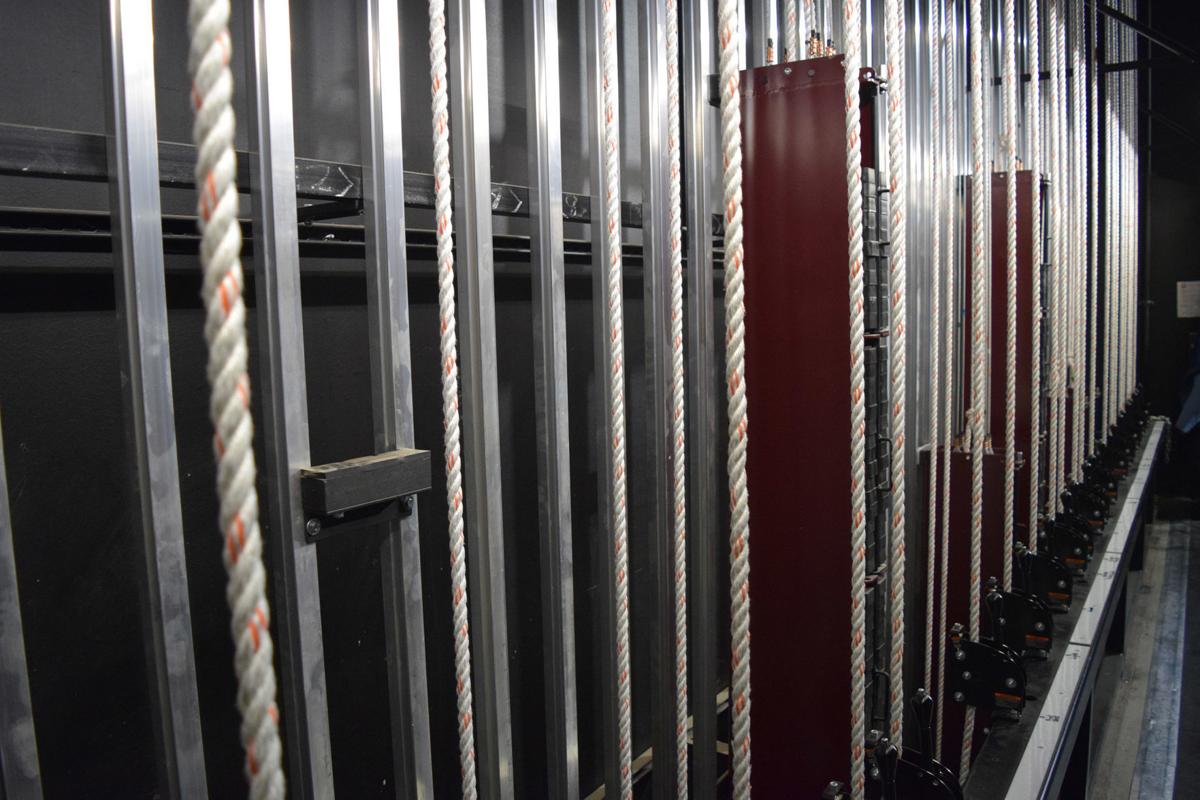 Ropes on the rigging system allow the crew to raise and lower curtains, backdrops, light bars and other effects from the fly loft to the stage. 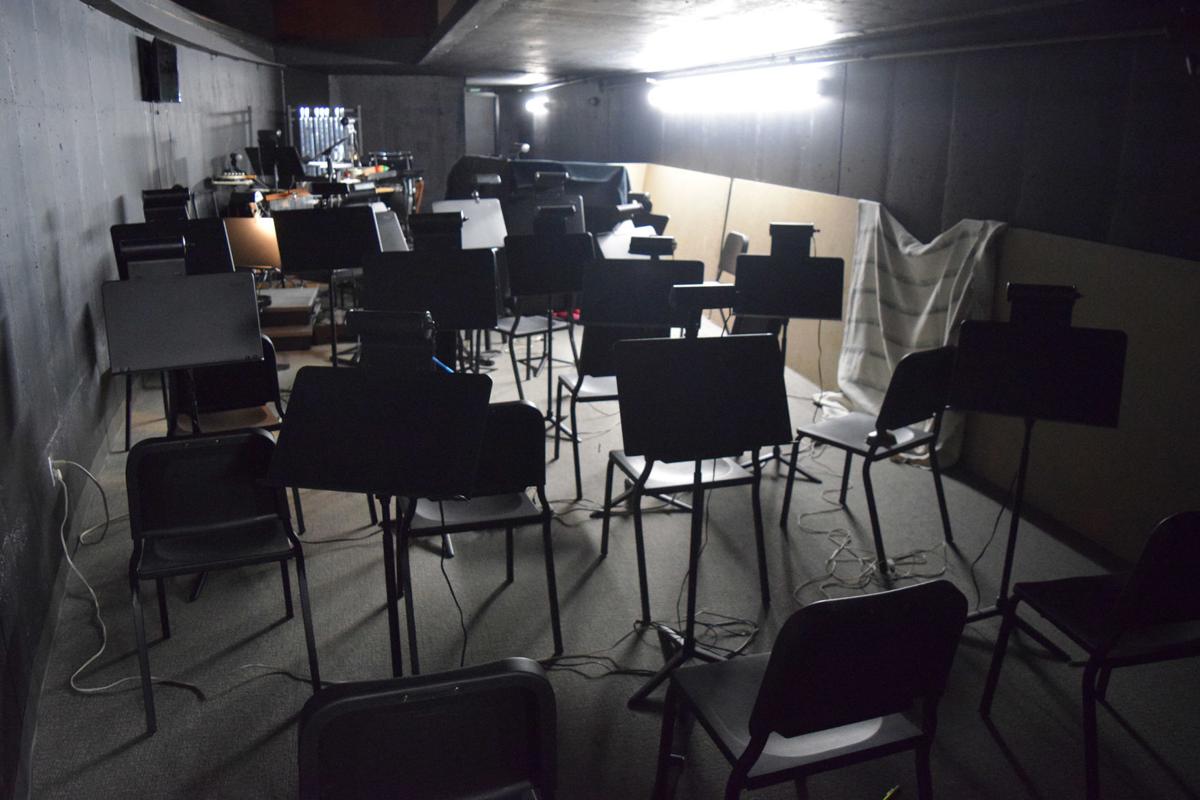 The new orchestra pit provides more space and discretion for musicians than the old facility. 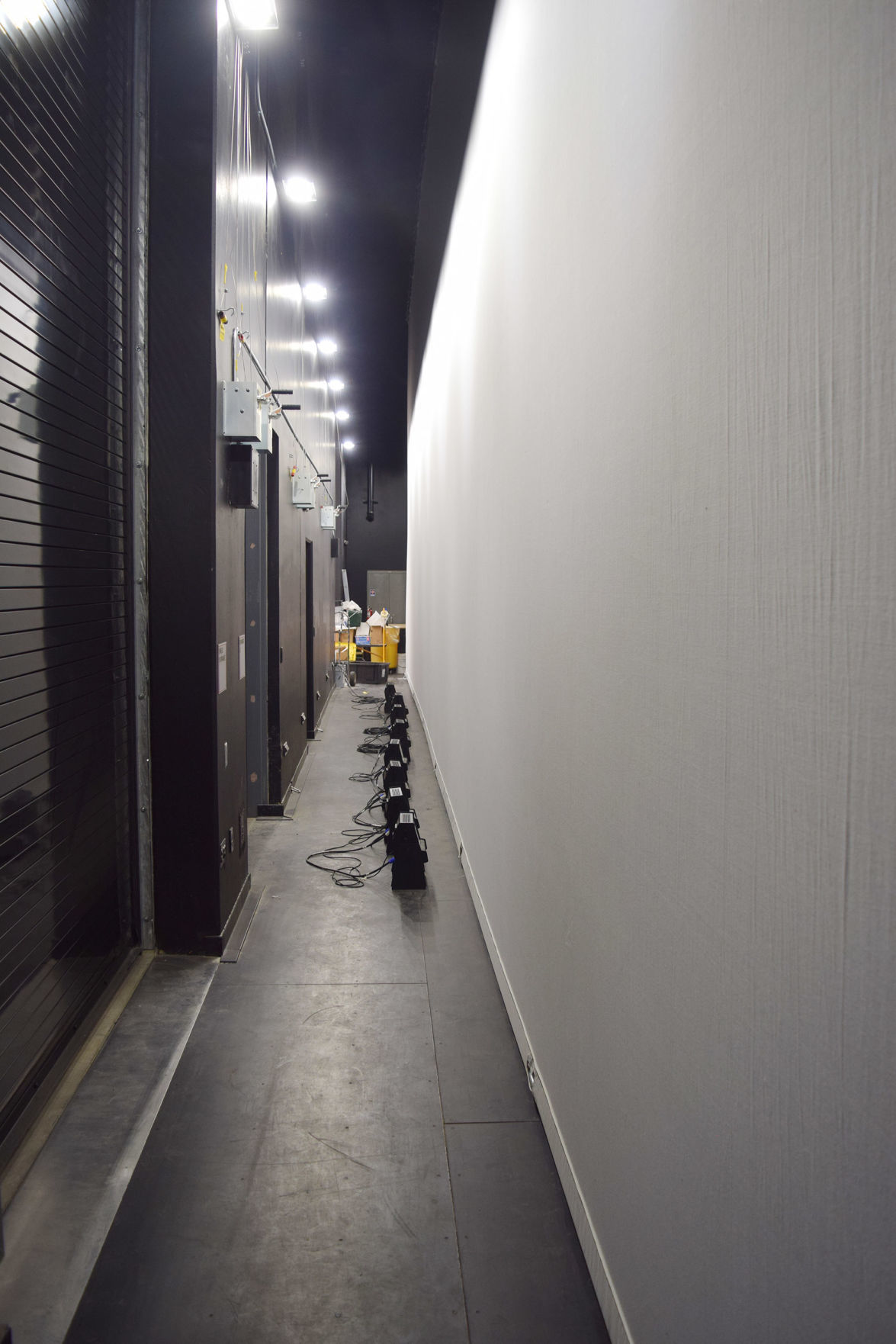 Behind the back-most curtain are lights. This space connects both sides of the stage as well as areas for set construction. 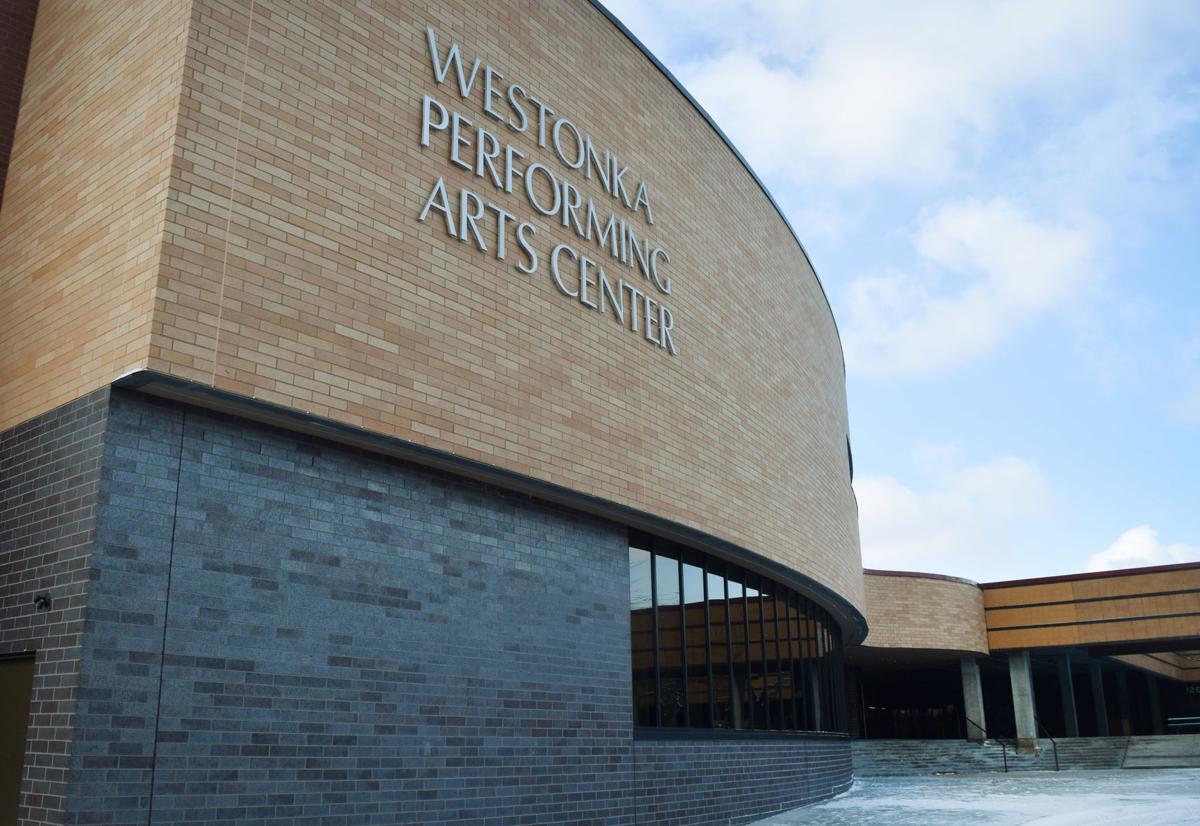 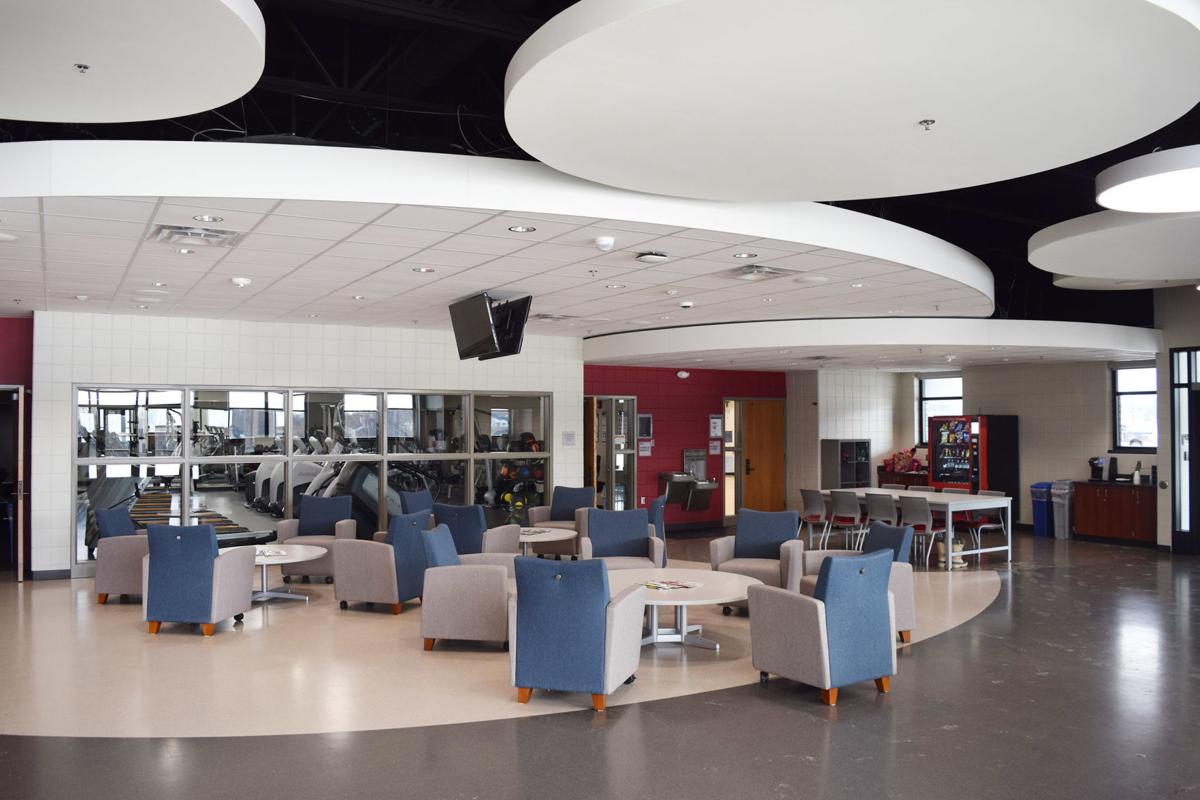 The lobby for the Westonka Activity Center features chairs and tables, handy for parents waiting for their children to finish practice. 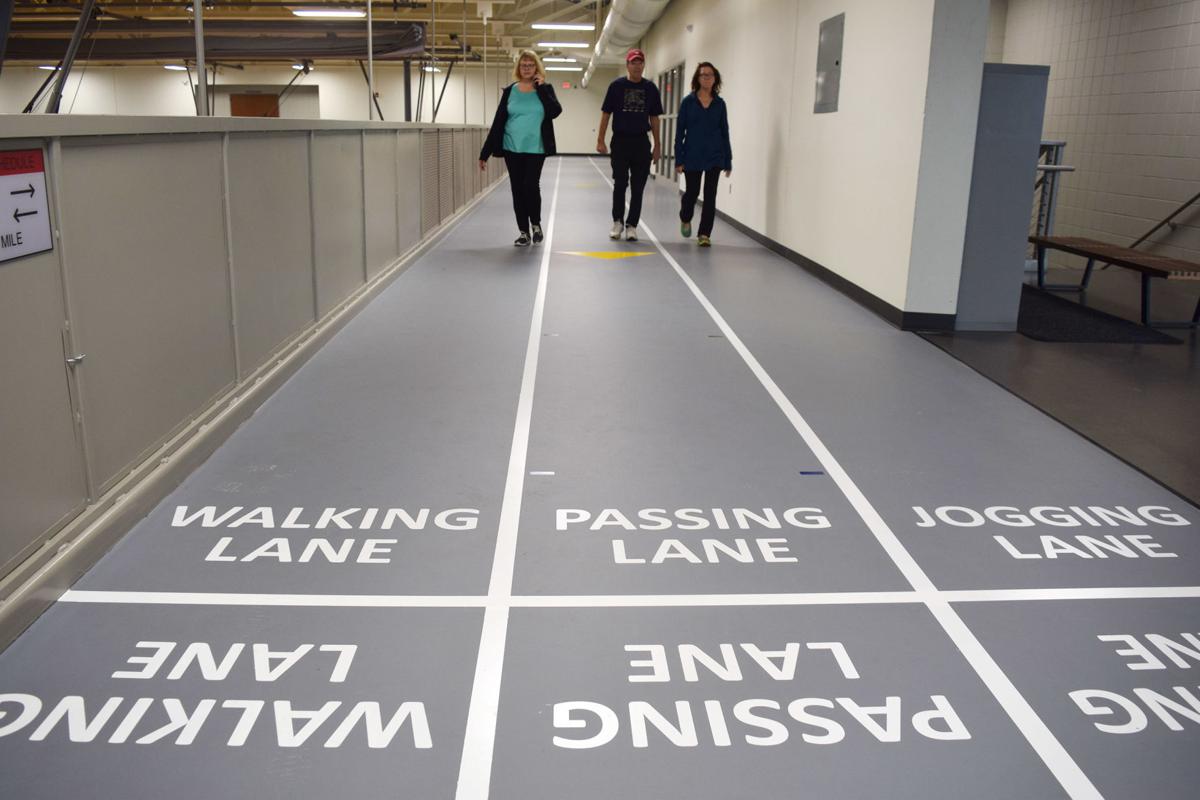 Nine laps around the track at the Westonka Activity Center equals a mile. The track circles the upper reaches of the gymnasium. 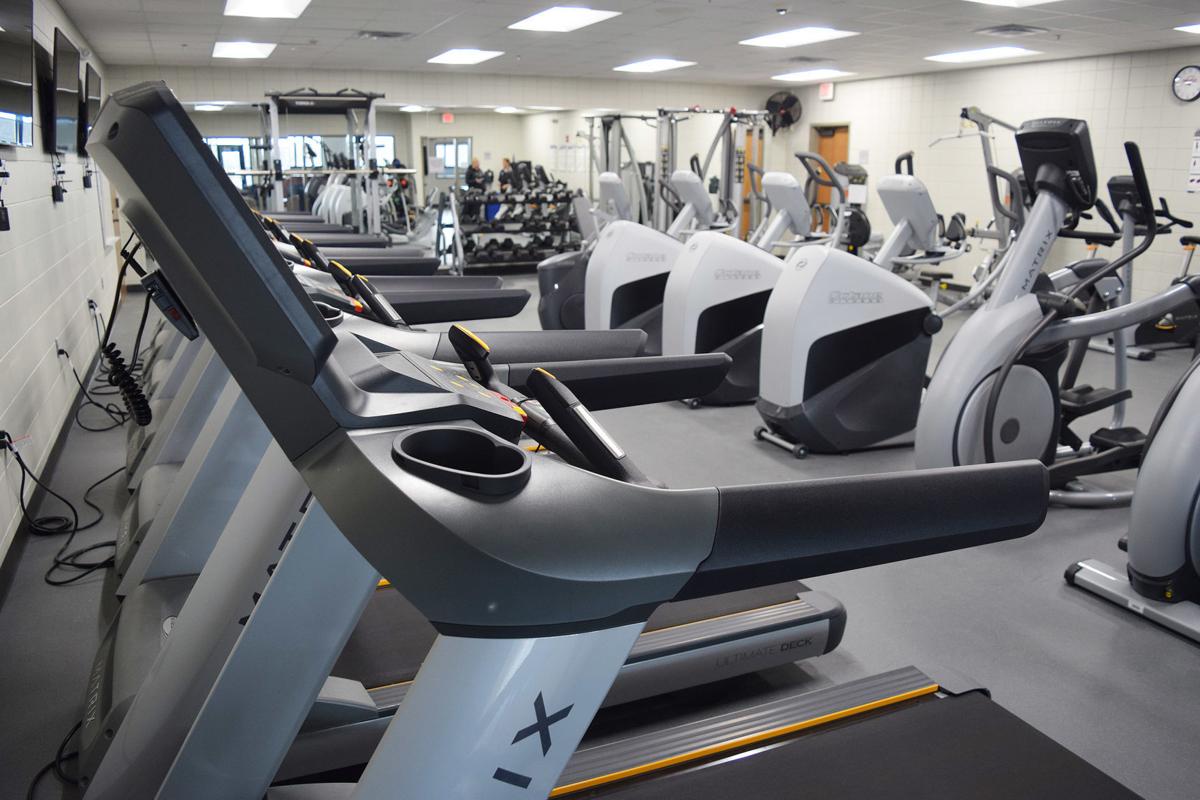 Exercise machines and weights fill a room at the Westonka Activity Center. 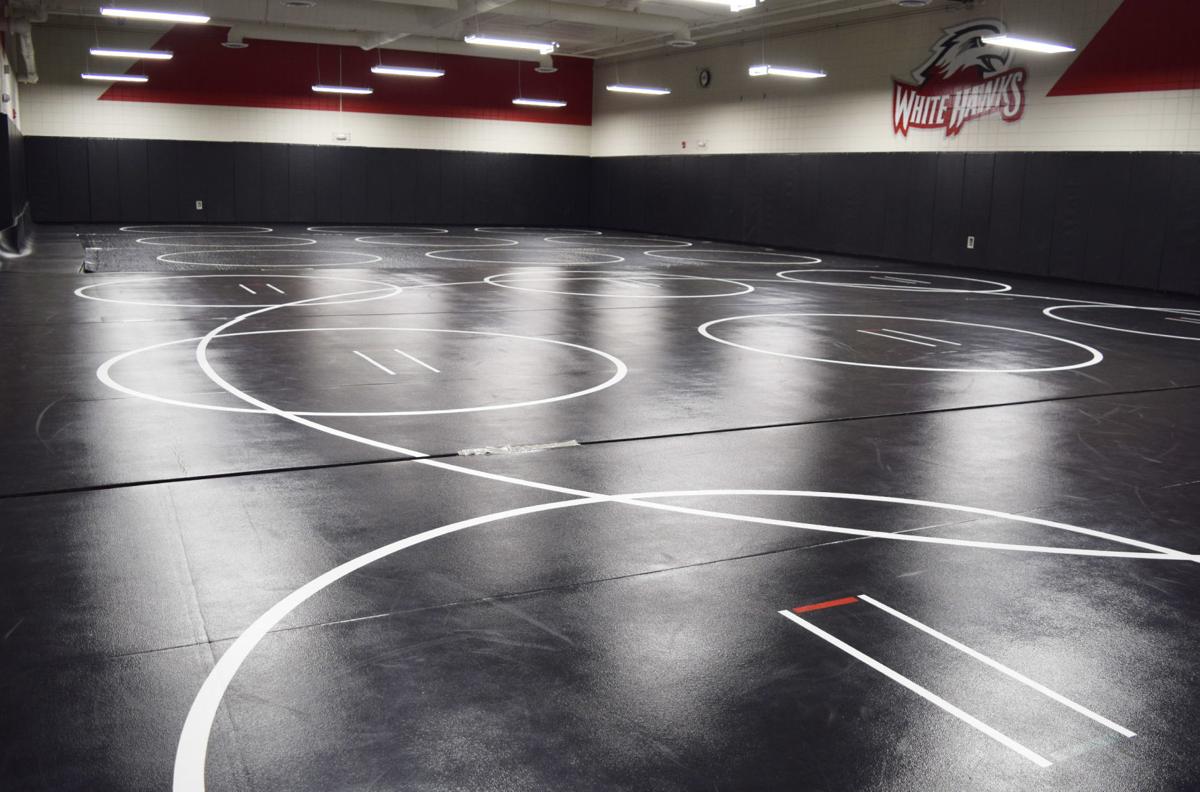 The Mound Westonka wrestlers finally have their own room. 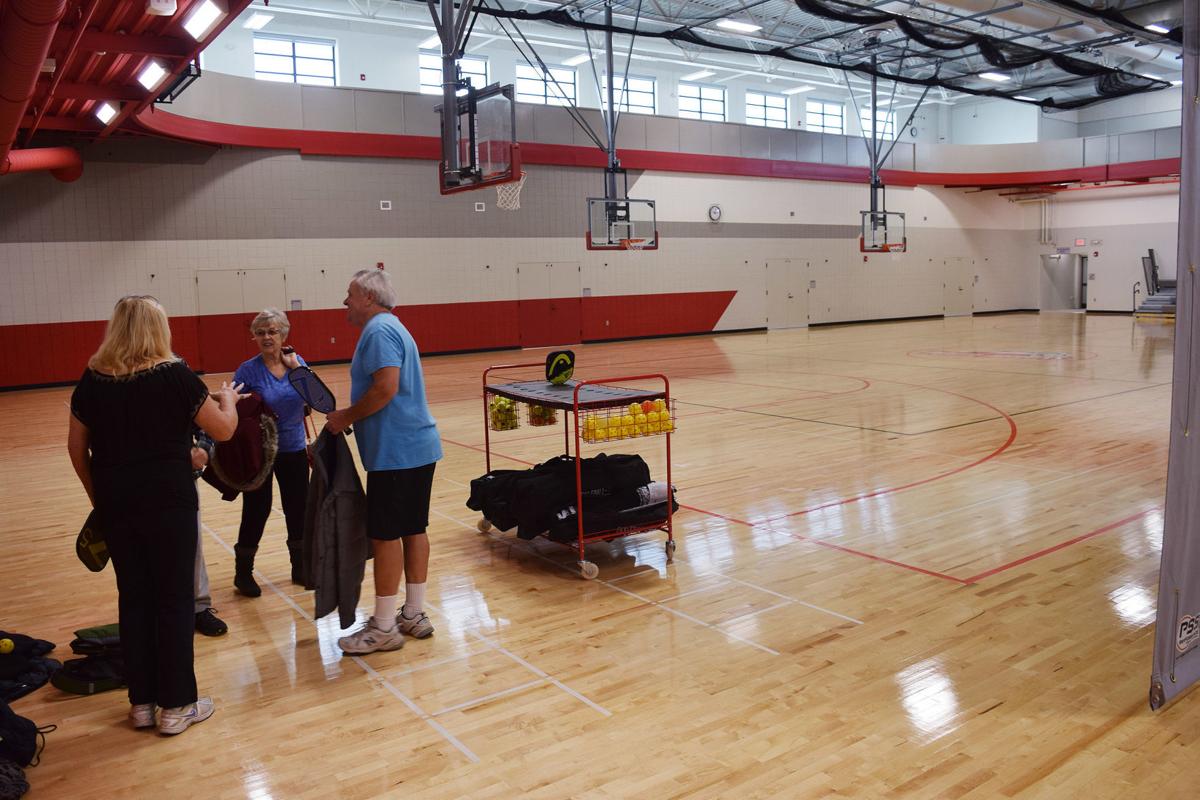 Pickleball players put away their gear after playing on Friday, Nov. 9, at the Westonka Activity Center. 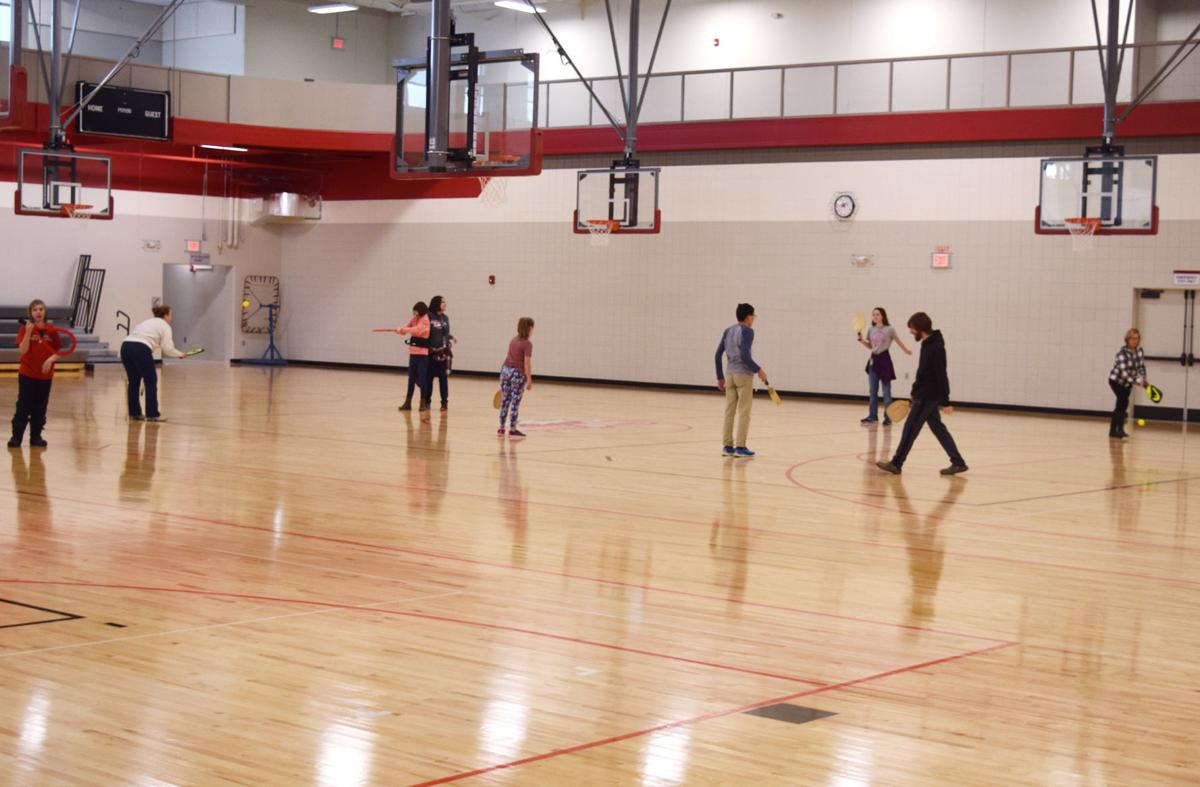 Children play with rackets inside the gymnasium on Friday, Nov. 9, at the Westonka Activity Center. The courts are striped for basketball, volleyball, pickleball, among other sports. 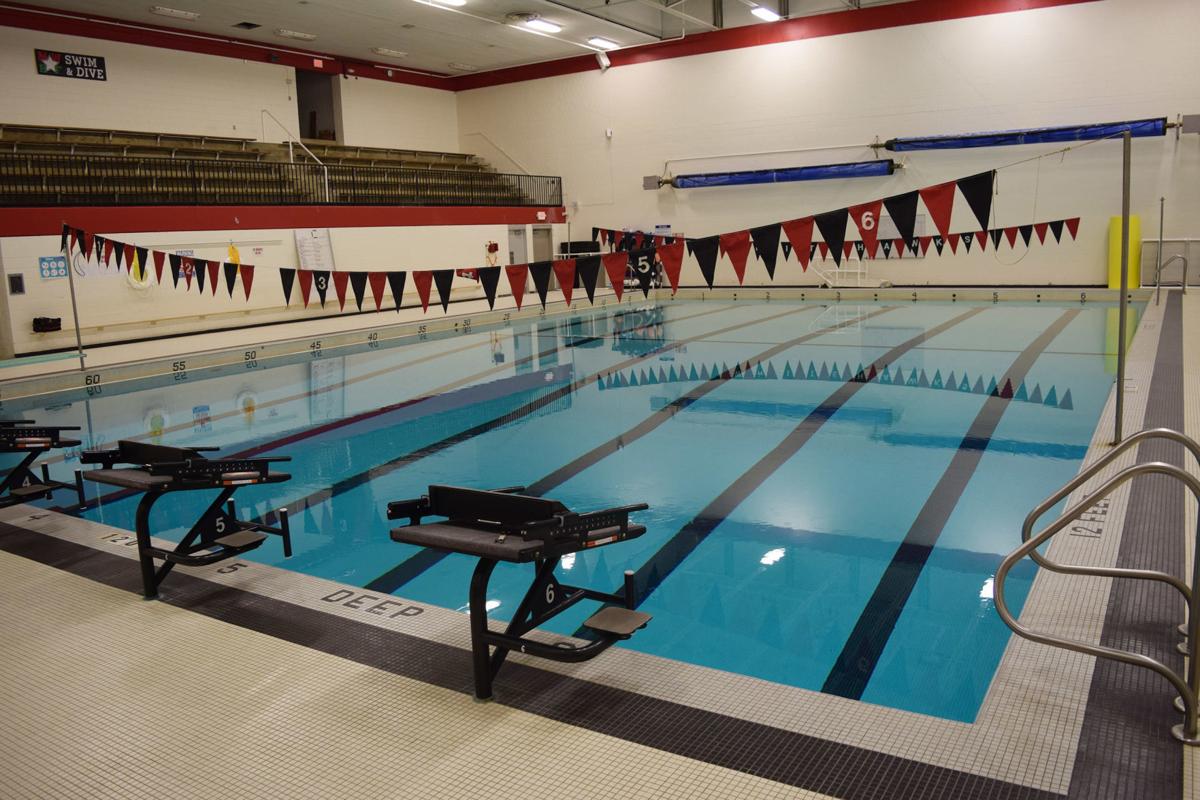 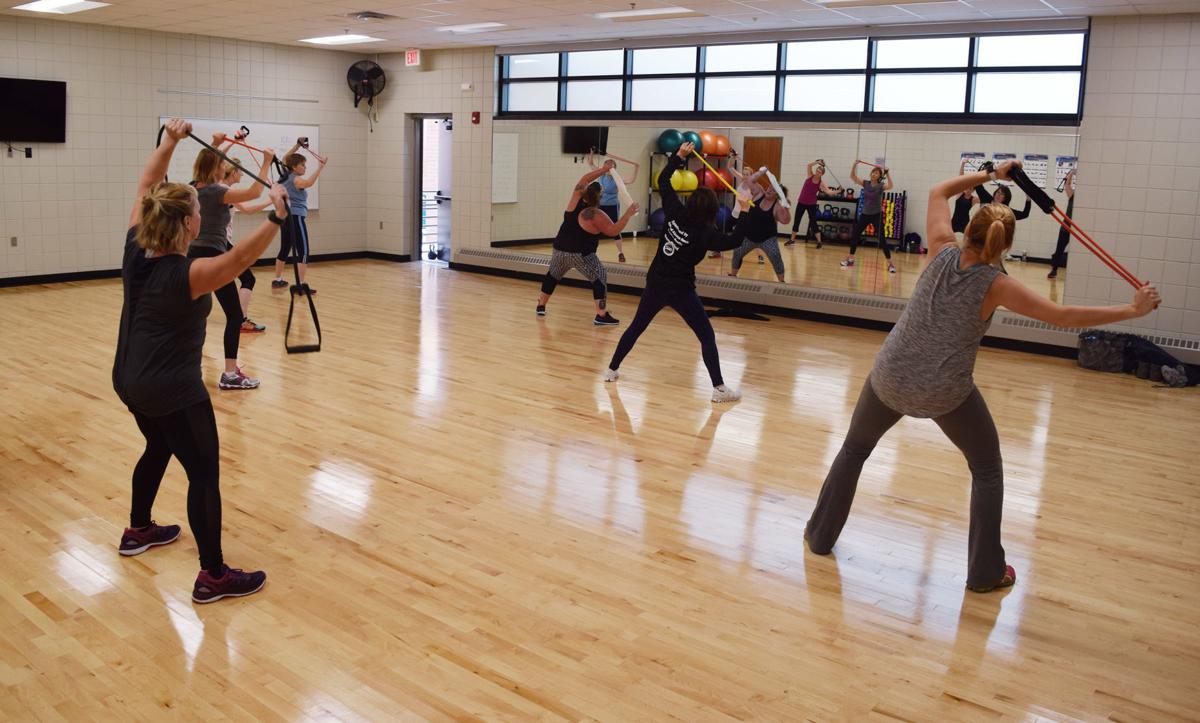 Women exercise in a fitness studio on Friday, Nov. 9, at the Westonka Activity Center. The center offers a selection of fitness classes.

Ropes on the rigging system allow the crew to raise and lower curtains, backdrops, light bars and other effects from the fly loft to the stage.

Behind the back-most curtain are lights. This space connects both sides of the stage as well as areas for set construction.

The lobby for the Westonka Activity Center features chairs and tables, handy for parents waiting for their children to finish practice.

Nine laps around the track at the Westonka Activity Center equals a mile. The track circles the upper reaches of the gymnasium.

Exercise machines and weights fill a room at the Westonka Activity Center.

Women exercise in a fitness studio on Friday, Nov. 9, at the Westonka Activity Center. The center offers a selection of fitness classes.

That’s the message people who run the new Performing Arts Center and Westonka Activity Center at Mound Westonka High School have for the community who helped make the new facilities happen.

In May 2016, voters in the Westonka School District approved $22.95 million in bond funding for the additions to the high school, which were completed this fall.

The 48,000-square-foot activity center boasts numerous features for everyone in the Mound area to enjoy, with memberships available for community members.

“In planning this facility, we tried to look at it from three different lenses — the school aspect, the community aspect and then our active senior population because they were really pivotal in getting everything pushed through,” Rague said.

The center has a cardio room with a variety of machines for different ability levels; a fitness studio that offers a variety of classes; an elevated walking track with windows looking out so walking in circles doesn’t seem so redundant; and a three-court gymnasium that can be used for basketball, pickleball, volleyball and tennis, as well as the ability to add nets for softball and baseball batting practice and golf.

Rague said pickleball has been the biggest draw so far, noting they offer 21 hours of pickleball court time a week and people have been asking for more.

Another highlight of the new Westonka Activity Center is adding a designated wrestling room for the varsity and youth wrestling programs. Prior to the addition, the varsity wrestling team practiced in the cafeteria, having to roll out and clean up the mats daily.

The new facility does connect to the high school’s other gyms, which were already there, as well as the six-lane pool, making the aquatics area accessible to the community more often than before. Rague said prior to the addition, there were only about two hours a week for the community to use the pool, but now community pool hours are closer to 15-20 hours a week — and that number will go up once the swimming season is over.

“There’s very rarely something in here that someone would want to do that can’t be done — we even had a guy come in here and practice fly fishing, believe it or not,” Rague said. “We truly tried to make it a facility that the community could use for whatever the community desired it for.”

The Westonka Activity Center is open to the public, with different memberships available. You can sign up online at westonkaactivitycenter.com or stop in the gym. Members can use the facility for free, while daily rates for adults and students are $5 for district residents and $7 for nonresidents. The daily rate for seniors age 60 and up is $3 if they live in the district or $5 if they live outside the district, and the walking track is free for all seniors.

Plays and concerts at Mound Westonka High School were previously held in an old lecture hall that was named the “little theater.” It had minimal lighting, no microphones, no dressing rooms, and performers were on the same level as the orchestra, making it hard to balance sound during a performance.

But now, thanks to the bond referendum, shows will be performed in the new 611-seat Performing Arts Center, which has all the bells and whistles of a professional theater.

Kelly Newell, Performing Arts Center coordinator, told Lakeshore Weekly News students “have done beautiful work with nothing or very little” for so long, but this new auditorium is “a beautiful gift” for them that will “really help them shine.”

“All of their hard work pays off because they A. can be seen because of the seating and B. be heard, so it’s really awesome,” Newell said, noting “in the old theater you’d have to listen so carefully to make sure you heard everything.”

That’s not the case with the new auditorium, with Newell recalling a recent rehearsal for the upcoming musical “The Addams Family” when a student told a joke that would have been missed in the old theater, but now the joke really lands and can be heard.

Newell said “they did a phenomenal job with sound,” noting from the beginning of the planning process “acoustics were really important” and made a priority.

The Performing Arts Center has a green room with seven dressing rooms and 12 spots for hair and makeup; a costume shop where people can sew costumes; a scene shop where students can build scenery; LED lighting with the latest technology; an orchestra pit; a special room to keep the 8-foot grand piano in pristine condition; and art gallery space in the lobby.

Newell said the facility isn’t just for students. It’s a spot for the community, with many outside performances already on the calendar.

“We’re just grateful to the community for making this happen,” Newell said.

“The community paid for this. We want it to be a place where people come on the weekends, they don’t have to drive all the way to Minneapolis to see a show,” Newell added. “We’re trying to bring lots of variety in our programming … so it’s not just for choirs and bands and school things, but really to bring the community to this space.”

The first musical at the new Performing Arts Center begins Thursday, Nov. 15 and runs through Sunday, Nov. 18. You can buy tickets and choose your seat for “The Addams Family” online at www.westonkapac.com. Upcoming performances and information on ticket sales will also be posted on the website.