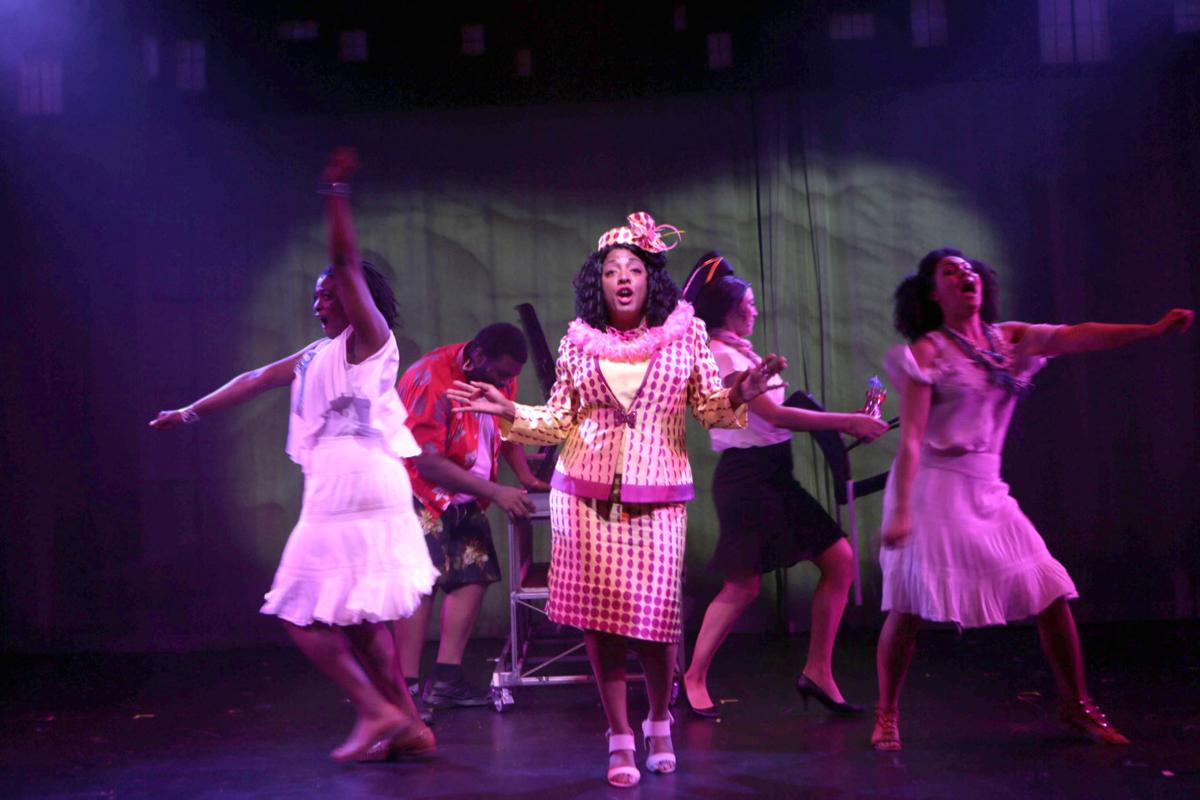 Psychic Oda Mae Brown, center, played by Heather McElarth, acts out her dream of life as a millionnaire in "Ghost: The Musical" at the Old Log Theatre. 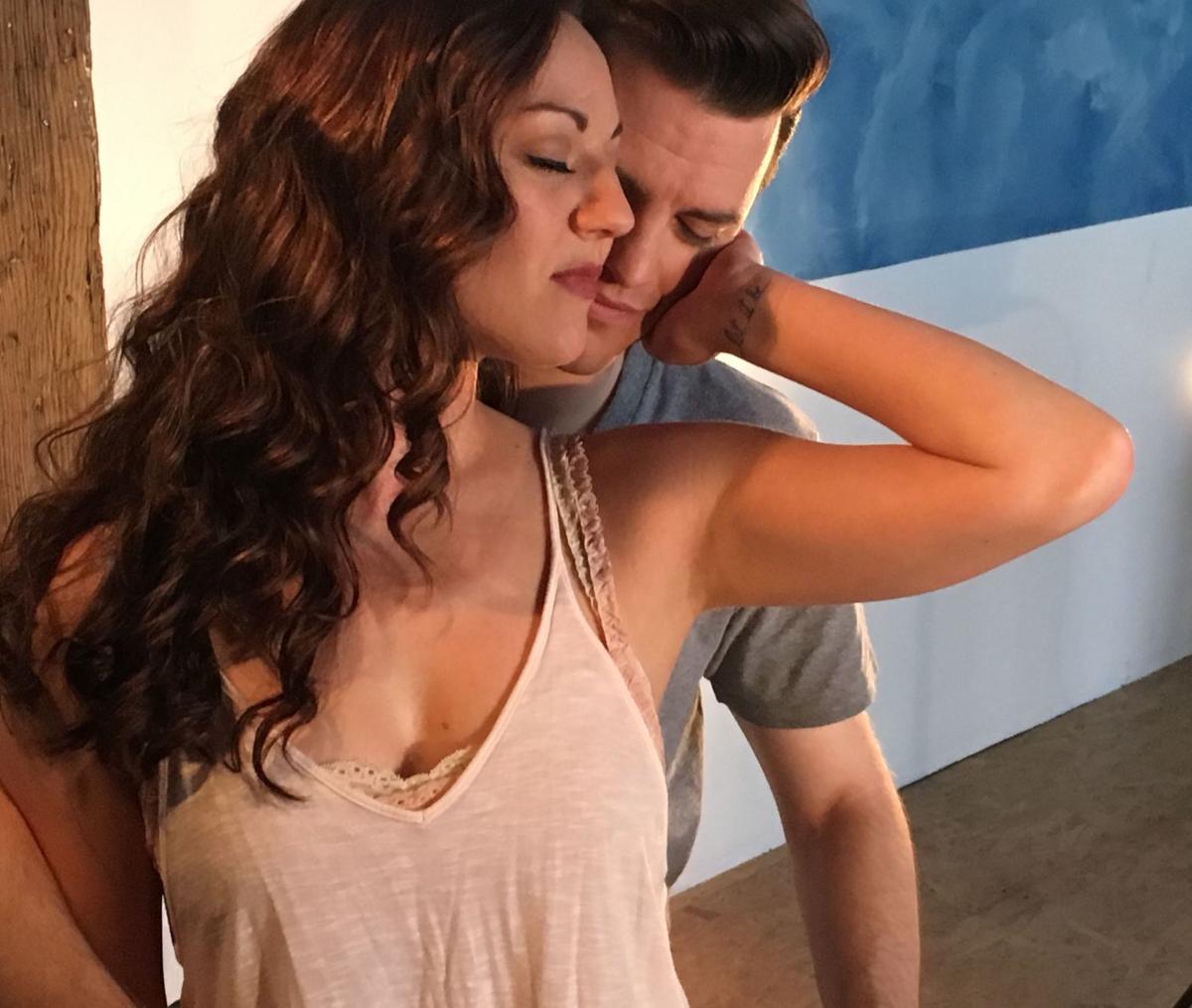 Molly and Sam share a tender moment in "Ghost: The Musical" in June 2017 at the Old Log Theatre. 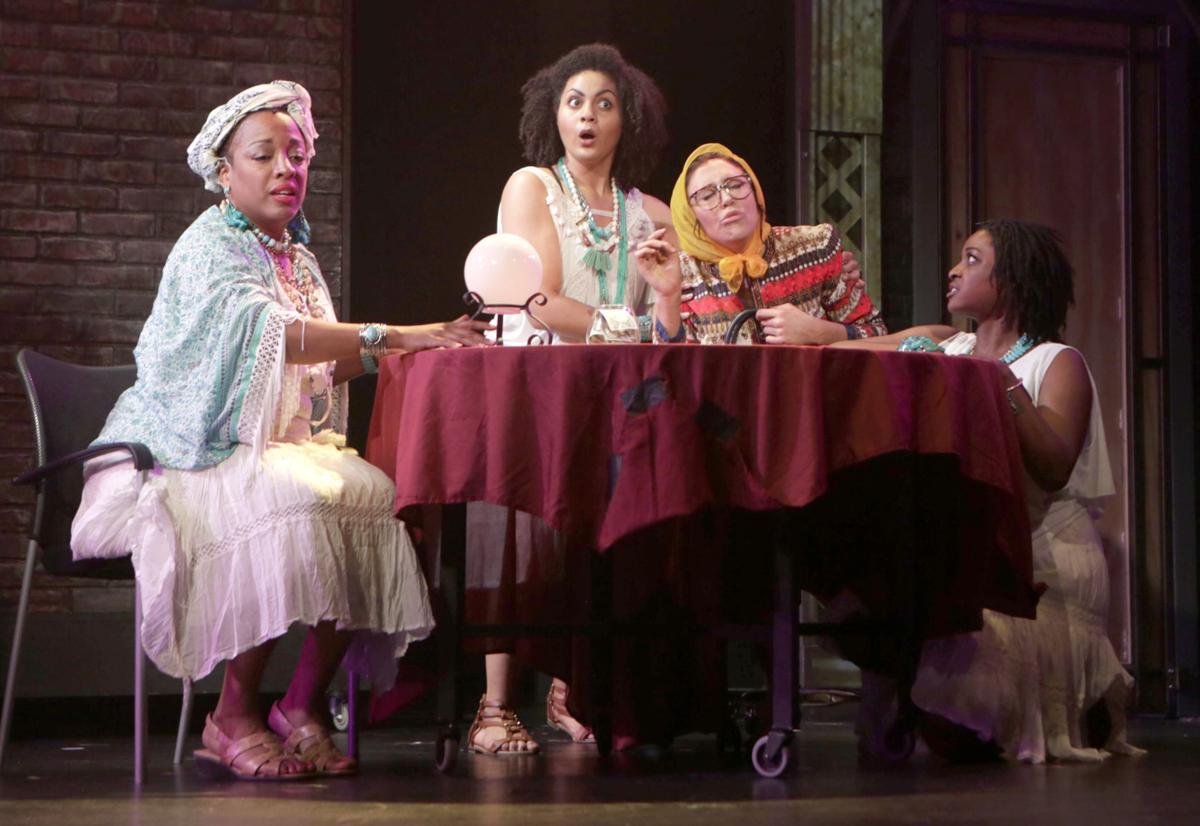 Oda Mae Brown, portrayed by Heather McElarth, at left, plays at being a psychic. Then she gets more than she bargains for in the Old Log Theater's "Ghost—the Musical."

Psychic Oda Mae Brown, center, played by Heather McElarth, acts out her dream of life as a millionnaire in "Ghost: The Musical" at the Old Log Theatre.

Molly and Sam share a tender moment in "Ghost: The Musical" in June 2017 at the Old Log Theatre.

Oda Mae Brown, portrayed by Heather McElarth, at left, plays at being a psychic. Then she gets more than she bargains for in the Old Log Theater's "Ghost—the Musical."

Nearly everyone of a certain age has seen the romantic comedy thriller starring Demi Moore, Patrick Swayze, and Whoopie Goldberg. Who doesn't get a little choked up the moment the song "Unchained Melody" begins?

The Old Log Theatre's summer production of "Ghost-The Musical" provides good summer entertainment. Everything you loved about the movie is there: the romance, the song, the pottery wheel, the nefarious best friend.

And of course, shady lady psychic Oda Mae Brown, channeled by Heather McElarth, who nearly steals the show with her sassy attitude and comic timing.

Director Eric Morris knew McElarth was meant to play "Oda" when he met her at the Ivey Awards, the annual Twin Cities theater awards event.

"She performed 'Hound Dog,' as Big Mama Thornton," Morris said. "I thought, 'I need to meet her immediately about this amazing role she'd be perfect for.' She really nails it. "

Greg Frankenfield, Old Log Theatre owner and producer, loved the movie when it came out in the 1990s. He saw the stage production when it came through Minneapolis.

"I thought they lost the love story between Sam and Molly," Frankenfield said by email. "I wanted to see it done right and when they came out with a pared-down chamber version, I thought it was an opportunity to re-imagine the show."

The movie was a huge hit for so many reasons. It had star power, romance, comedy and mystery. But could those elements be pulled off in theater, especially the ghostly part? Actor Eric Morris thought it could.

Morris, an Ohio transplant, has appeared in numerous Twin Cities theater productions. A year ago, he played a raucous and randy Jerry Lee Lewis in the Old Log's production of "Million Dollar Quartet."

Morris recalls conversations with Frankenfield about bringing the show to the Old Log.

Morris knew from reading reviews the New York production was criticized. It had a cast of 30, and many of the ghostly special effects involved hydraulics and state-of-the-art technology.

"There was supposed to be all this magic," Morris said. "It was very far from bare bones, and for the reviewers, it was all too much."

"In the movie, the locations are all over New York City," Morris said. "But that's film. This is theater. How do you convey that sense of the city and moving through it?

"And, the aesthetic of a small cast doing a big show has always appealed to me," Morris said. So I loved the idea of bringing it down to its bare bones storytelling with an ensemble cast, and moving around the scenic elements. I like the idea of never hiding anything from the audience.

"I referenced the Broadway hit, 'Come Away,' the story about the day of 9/11, when 38 planes were diverted to Gander, Newfoundland," Morris said. "In it, they used two tables and 10 chairs to create buses, the planes, everything.

"I really like that type of theater," Morris said, to which Frankenfield asked, "Would you like to direct?"

"I said it would be my first time (directing), but I was willing to give it a go," Morris said. "It's not anything I've had on my radar. I admire his commitment to me, to keep me working and offering artistic opportunities."

The Old Log's production is pared down; its ensemble cast doubles as set movers, tightly choreographed to appear effortless.

Morris stripped the set down to "getting down to brass tacks and completely creating a story with three window boxes and making it work."

He enlisted help from a set designer friend who shared his vision of a minimal set with the cast seamlessly transforming the stage.

"We mapped it out, moved things around. Our brains were fried, and then of course, we'd sit down, look at the number of people in cast (and ask) who do we have to do this?"

Choreographed, like a dance, or a precision drum and bugle corps, the small cast eventually nailed it. Similarly, visual sleight of hand makes the death scenes dramatic and mystical.

"...the aesthetic of a small cast doing a big show has always appealed to me."