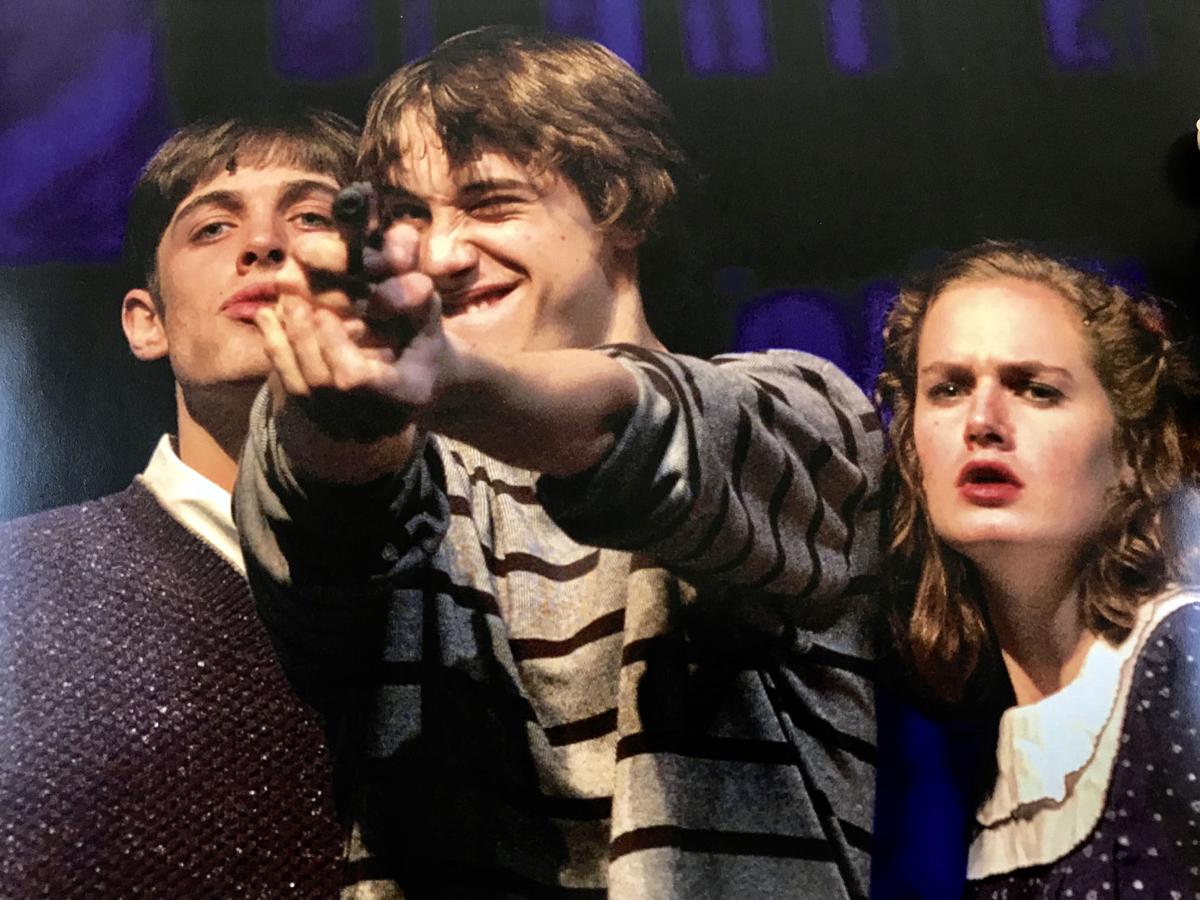 Nate Irvin, Ryan McCartan and Kelsey Peterjohn during a performance of “Blood Brothers” at Minnetonka High School in 2008. Director Kent Knutson said he has the photo framed. 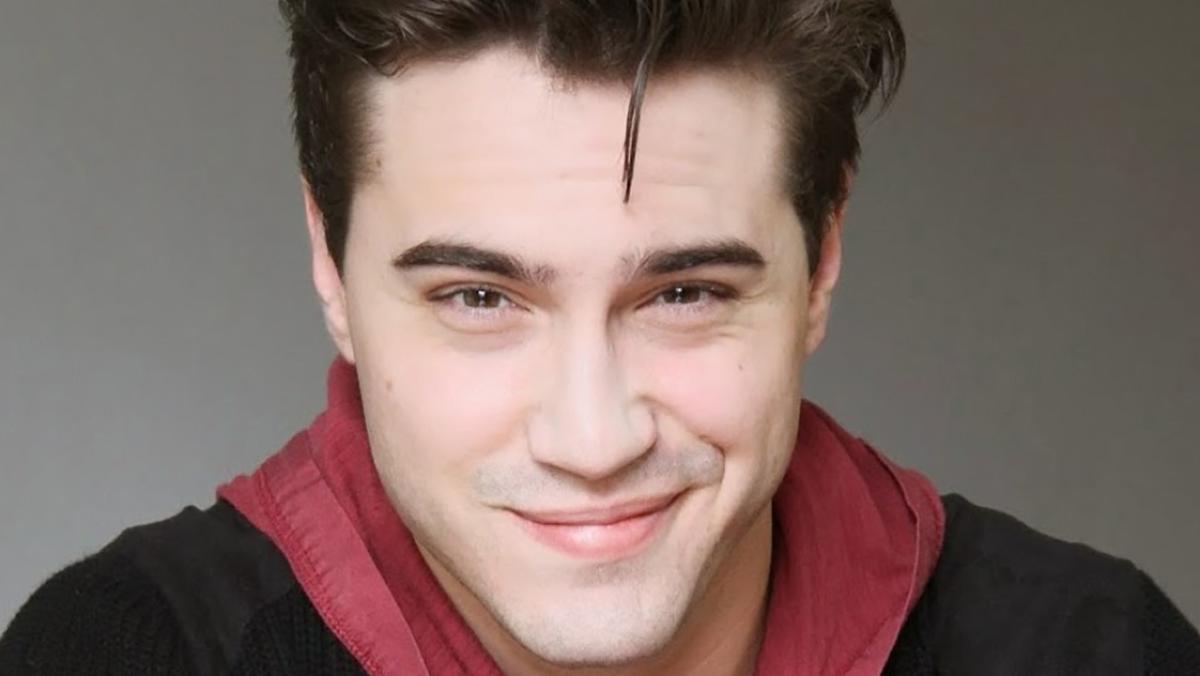 McCartan will begin performing as Fiyero in “Wicked” starting Sept. 11. 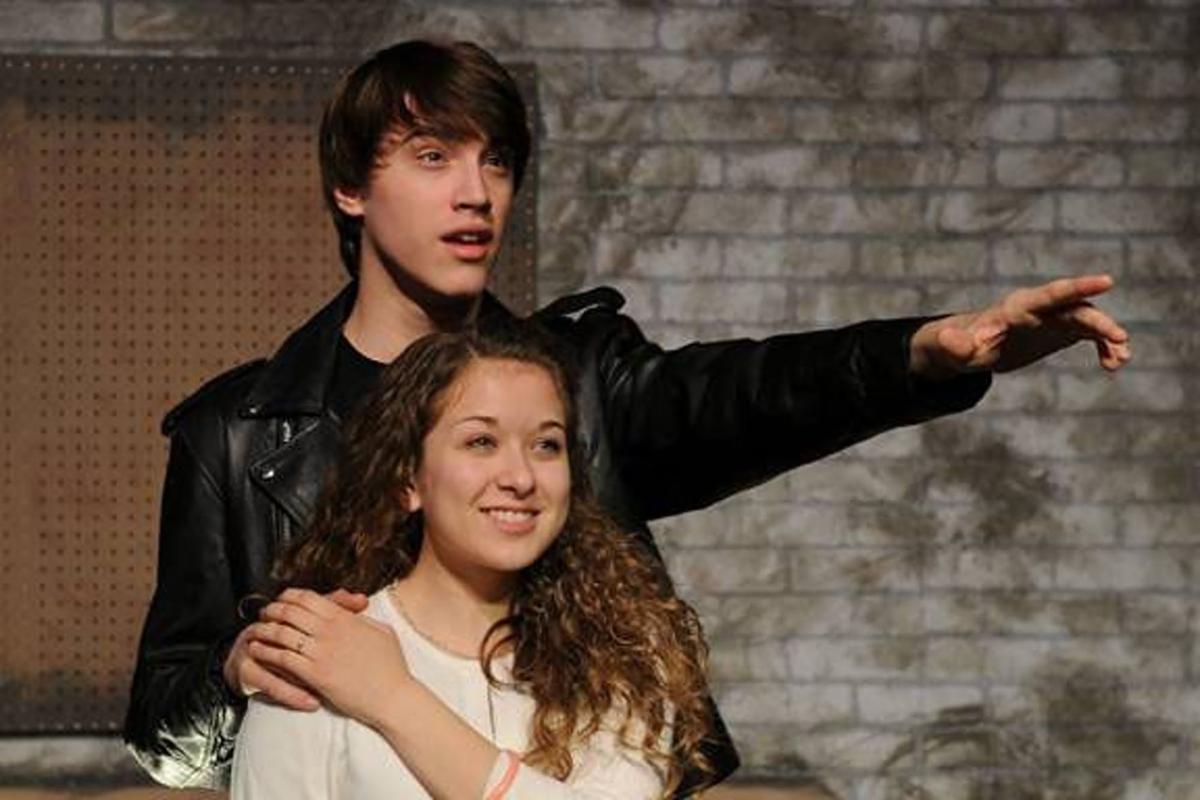 Ryan McCartan and Julia Wiersum in an image from the Minnetonka High School production of “All Shook Up: The Elvis Musical.” 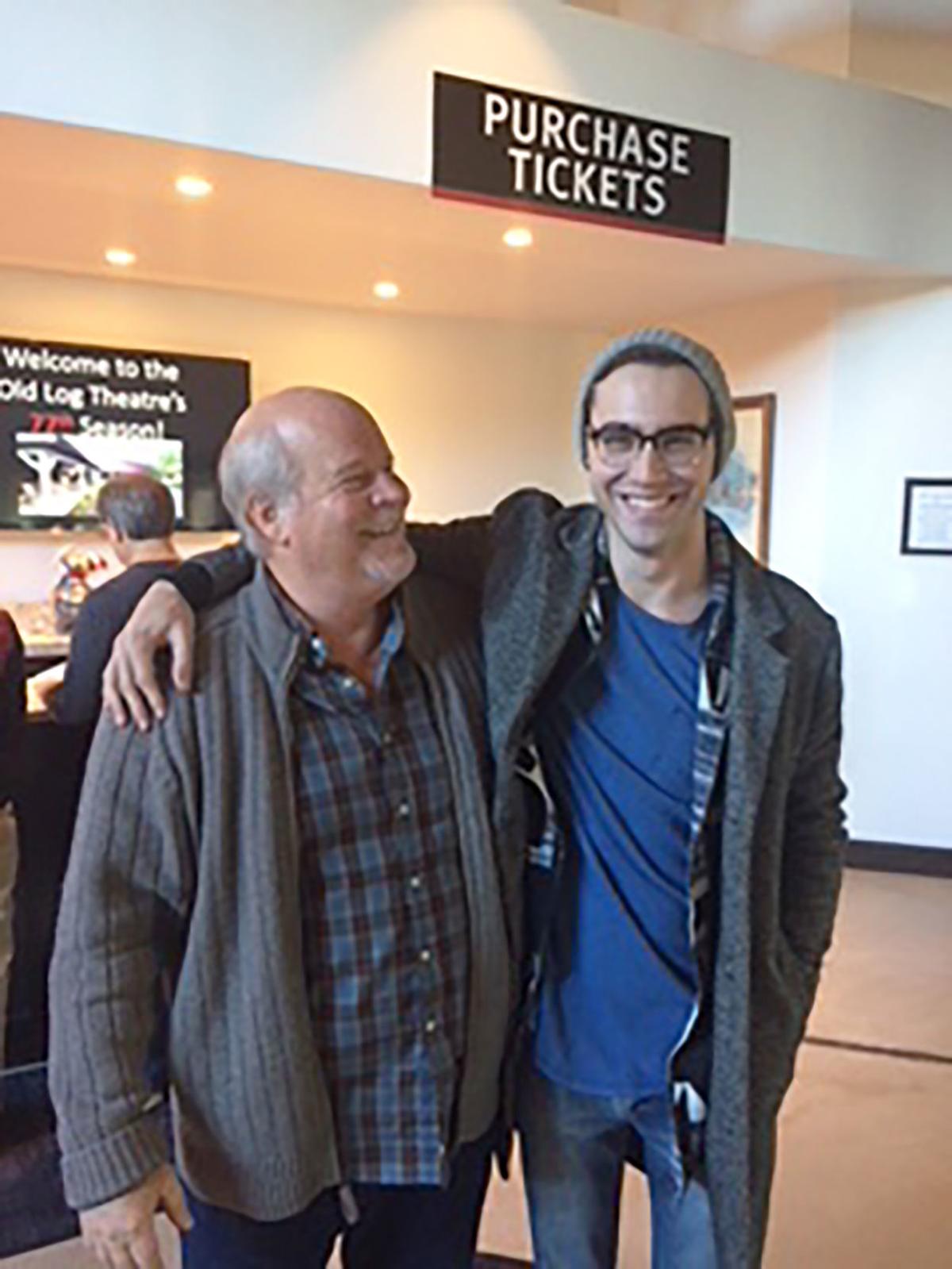 “Every time he’s in a show, my wife and I will pack up the bags and go watch him like he’s an adopted kid,” Knutson said. 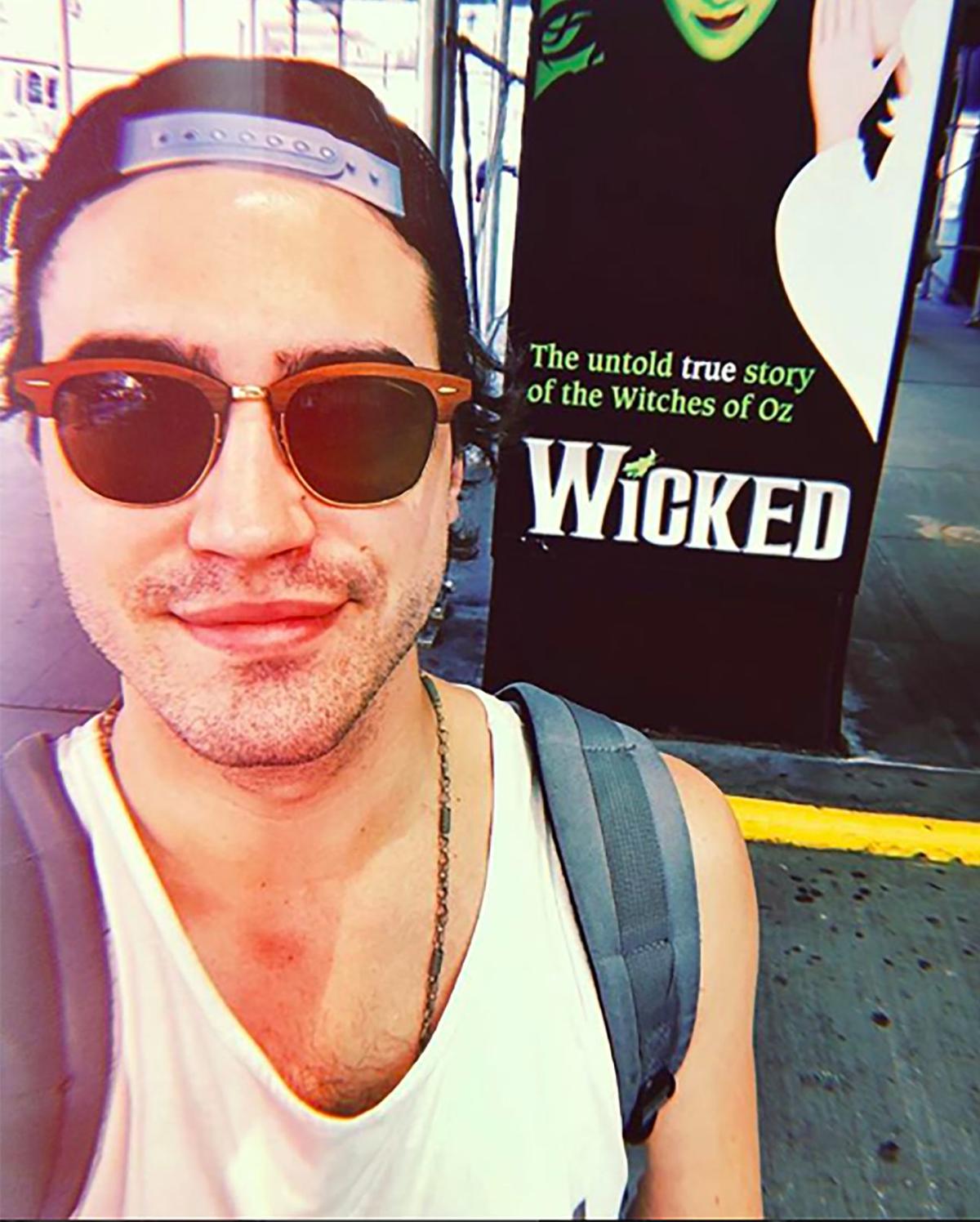 Ryan McCartan posted the selfie to Instagram outside the Gershwin Theatre in New York City.

Nate Irvin, Ryan McCartan and Kelsey Peterjohn during a performance of “Blood Brothers” at Minnetonka High School in 2008. Director Kent Knutson said he has the photo framed.

Ryan McCartan and Julia Wiersum in an image from the Minnetonka High School production of “All Shook Up: The Elvis Musical.”

Ryan McCartan posted the selfie to Instagram outside the Gershwin Theatre in New York City.

MINNETONKA — By the time he was in high school, Ryan McCartan already wielded a gravity in his performances that brought parents to school plays not only to see their own kid, but to see McCartan specifically.

He showed an extraordinary ability to get inside characters, Minnetonka High School Theatre Director Kent Knutson said, even with emotional and gritty content.

“That’s unusual for a 17-year-old kid to do,” he said. “With Ryan, people didn’t come to the theater to see Bobby or Dad. They came to see Ryan give his best performance.”

A 2011 graduate of Minnetonka High School, McCartan made his Broadway debut Sept. 11 as Fiyero in “Wicked.”

The musical is based off the taut book by Gregory Maguire. It tells “The Wizard of Oz” story before Dorothy enters the picture from the perspective of the Wicked Witch of the West (Elphaba) and Glinda the Good Witch. Fiyero is Elphaba’s love interest.

McCartan’s first show was at the age of 10 or 11 at Minnetonka Community Theatre, he said. His father, Conn McCartan, is the retired Eden Prairie High School principal.

When the family moved to Excelsior for Conn’s work, they quickly became involved in theater. That includes McCartan’s sister, Alison, who also lives in New York City as a performer.

“Wicked” came out at around the same time of McCartan’s first performance. He and Alison sang along to the soundtrack in the car, to the “entertainment or dismay” of the McCartan parents, switching between the voices of Elphaba and Glinda.

As a teenager, he started singing more of Fiyero’s tunes. The daydream idea of getting to play Fiyero crossed his mind often, McCartan said.

“I remember having the distinct thought of, ‘Wow, I would really like to play this role someday. But I’m 13, so it’ll probably close by then,’” he said. “You can never see a worldwide phenomenon like this coming.”

“Wicked” soared from the get-go, winning three Tony Awards and a Grammy. When the nationwide tour began, the McCartans saw it. The show became his grandma’s favorite.

“The fact that she’s going to see it on Broadway is one of the crowning privileges of my life,” he said.

Landing one of the biggest roles on Broadway requires talent as well as seamless connections. For McCartan, those connections began in Minneapolis.

A contact in Minneapolis helped make him a tape for a Disney channel pilot. He didn’t get the role, but he found his current agent. This led him to a role on the Disney show “Liv and Maddie.”

From one stepping stone to the next, McCartan played JD in the original cast of Off-Broadway’s “Heathers: The Musical,” and Brad in Fox’s remake of “The Rocky Horror Picture Show.”

“Those things all happened in sequence and the catalyst was a Minneapolis connection that I made in theater, that would have otherwise been perceived as a minor market,” he said. “But it’s been pretty major for me.”

In high school, he won the Jimmy Award, which is the equivalent of winning a Tony for high school students.

“Sometimes kids can get a big head,” Knutson said. “He was a team player. He knew that success depended on everyone’s strengths in the cast. He’s very mature and very giving and very sharing.”

McCartan and Knutson said being among a constellation of talent at Minnetonka High School shaped his understanding of how theater works.

“At smaller schools, you might have a standout, and that’s it,” Knutson said, “At Minnetonka, he was surrounded by outstanding talent. There were lots and lots of kids of similar ability levels in a show.”

“There’s no one or two people who really carry the show,” he said. “They instill in everyone who’s a part of this, whether you’re hanging lights or doing sound or in the chorus that everyone’s role is important and contributes to the greater good.

“Hollywood is a vicious beast that’s hungry, that needs to be fed. When you grow up in Minnetonka, you’re taught so early to let that go. That’s a lovely thing about the community.”

McCartan and Nate Irvin, another Minnetonka actor who moved to New York City, met up to get a drink recently. McCartan brought up a moment from a high school “Into the Woods” rehearsal, when Knutson gave him a direction.

McCartan played one of the princes. He contradicted Knutson and said he thought that the prince would actually respond another way. Knutson listened, and they had a conversation about it.

“I was all of 15 years old,” McCartan said. “And maybe I didn’t know what I was talking about, but the fact that he listened anyway, that was really cool.”

Knutson has a memory that he says shows McCartan’s character during the high school years. Just weeks before a one-act had to be perfected, on Dec. 12, Knutson’s daughter died.

“I came back, and I didn’t know what to do,” he said. “We were right in the middle of the school year. We were destroyed — my family, my son, my wife — we didn’t see it coming.”

Knutson sat in his office at the start of rehearsal time, not knowing how to take on the day.

“Ryan walked into my office with a big smile on his face. He looked at me and said, ‘C’mon coach, let’s go! We’ve got things to do,’” Knutson said. “I looked at him and he smiled.

So Knutson got up and started rehearsal.

“The ability to say he understood and that he cared, that’s nothing to do with being an actor,” Knutson said. “That’s everything to do with quality and character. He knew what I needed to do.”

The thick of it

McCartan, who was actively recruited for the role of Fiyero, has been in the trenches with rehearsal, he said.

“I’ve never done anything like this,” he said. “The show is a well-oiled machine, so when I got to rehearsal, it’s me and the stage manager and the dance captain in an empty room.”

He had one rehearsal with the cast before the Sept. 11 show, where he performed for an audience of 2,000 people.

When he comes home, he likes to ride his bikes with his sister and hit up Adele’s Ice Cream in Excelsior. In winter, snow has become a novelty experience having lived in Los Angeles for several years.

He said being with his parents, grandmothers, aunts and uncles is what he cherishes.

“That’s what really recharges me,” McCartan said. “I have an awesome family and that’s something I never take for granted.”

A life in performance world can be frantic — moving from one stage to the next, packing bags just days after you were positive the next job wasn’t really going to work out.

“We’d like progress to be a straight line, but it never is,” Knutson said. “Not getting jobs as an actor is hard. He handles that. You’ve got to have an awful tough skin to be told ‘no’ and still keep on.”

Knutson said McCartan figured out how to work with the frenetic tempo. Always more gigs, always the next project lined up.

“I think there will be roles waiting for him as soon as he decides to bow out. Someone will see him and cast him in something else. If not he can always come back home and work for us.