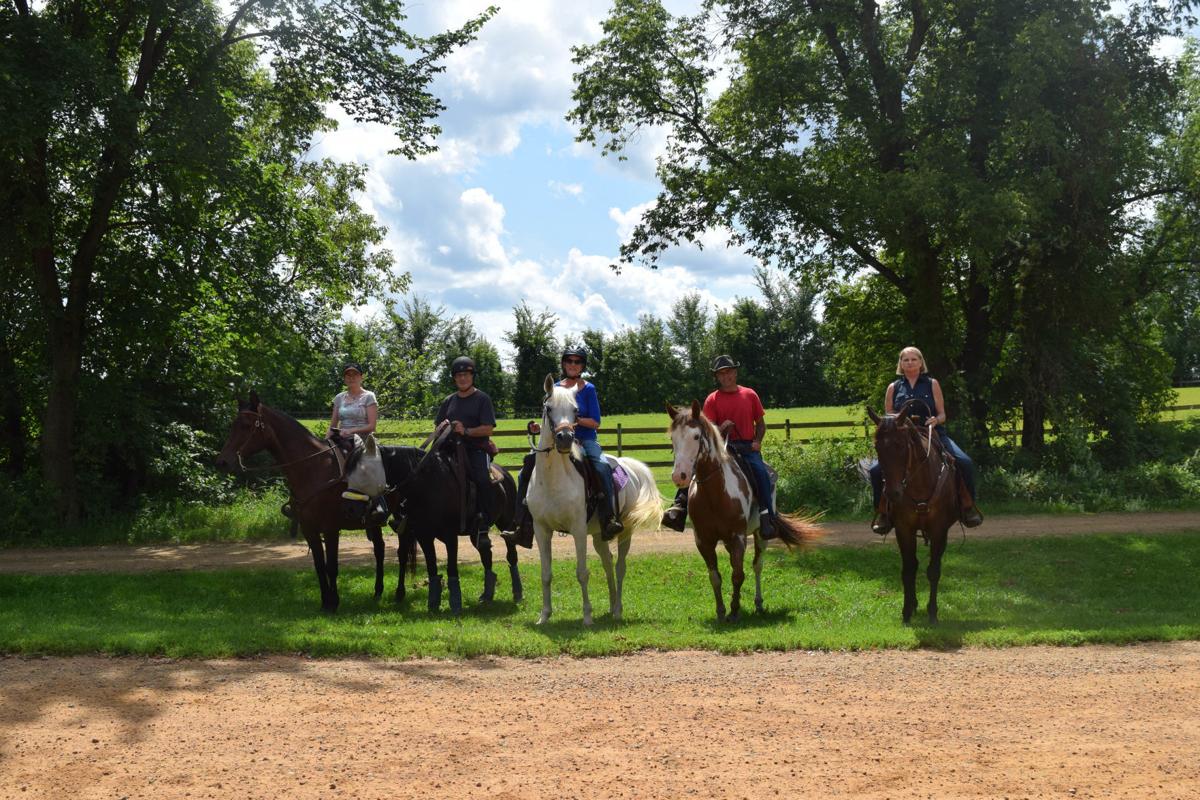 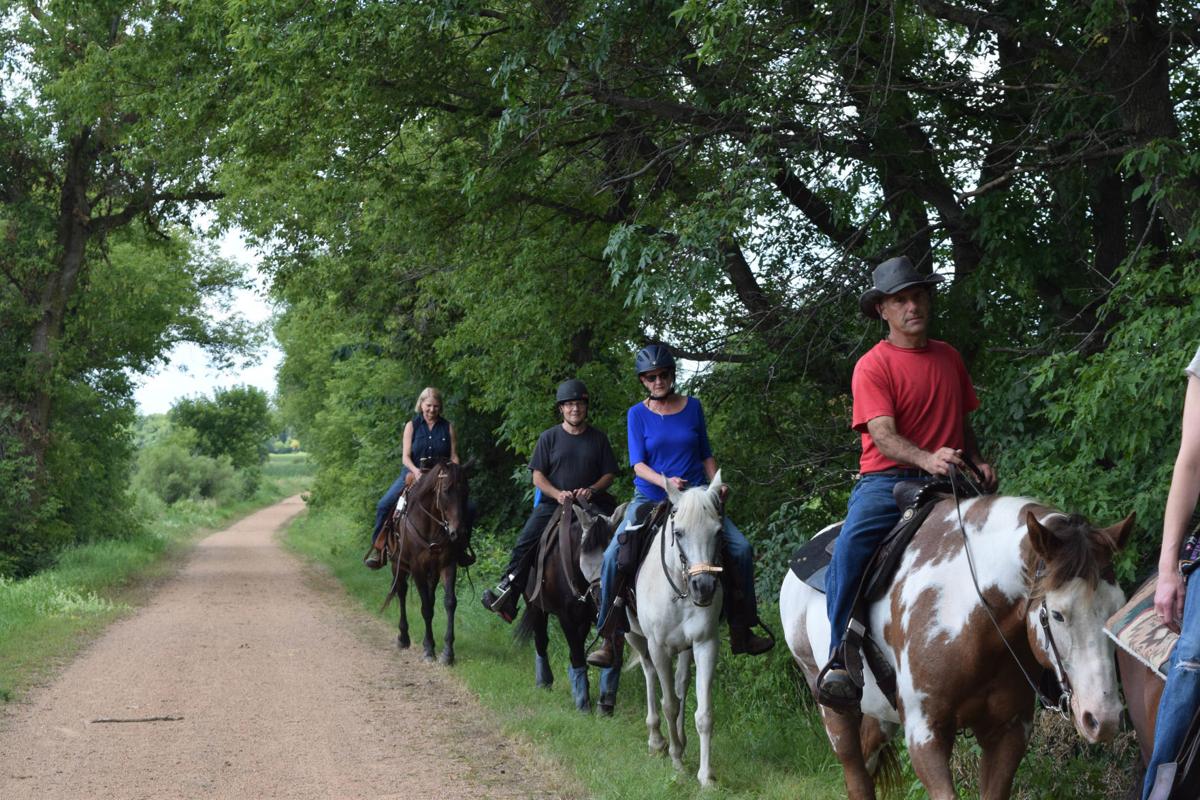 From left to right, Lorinda Pearson and her horse Super, Eugene Kelly and his horse Beauty, Julia LaRose and her horse Shadow and Ed Chadwick and his horse Joey ride on the Luce Line horse trail. At this point in Watertown, the trail runs alongside the limestone bike path. 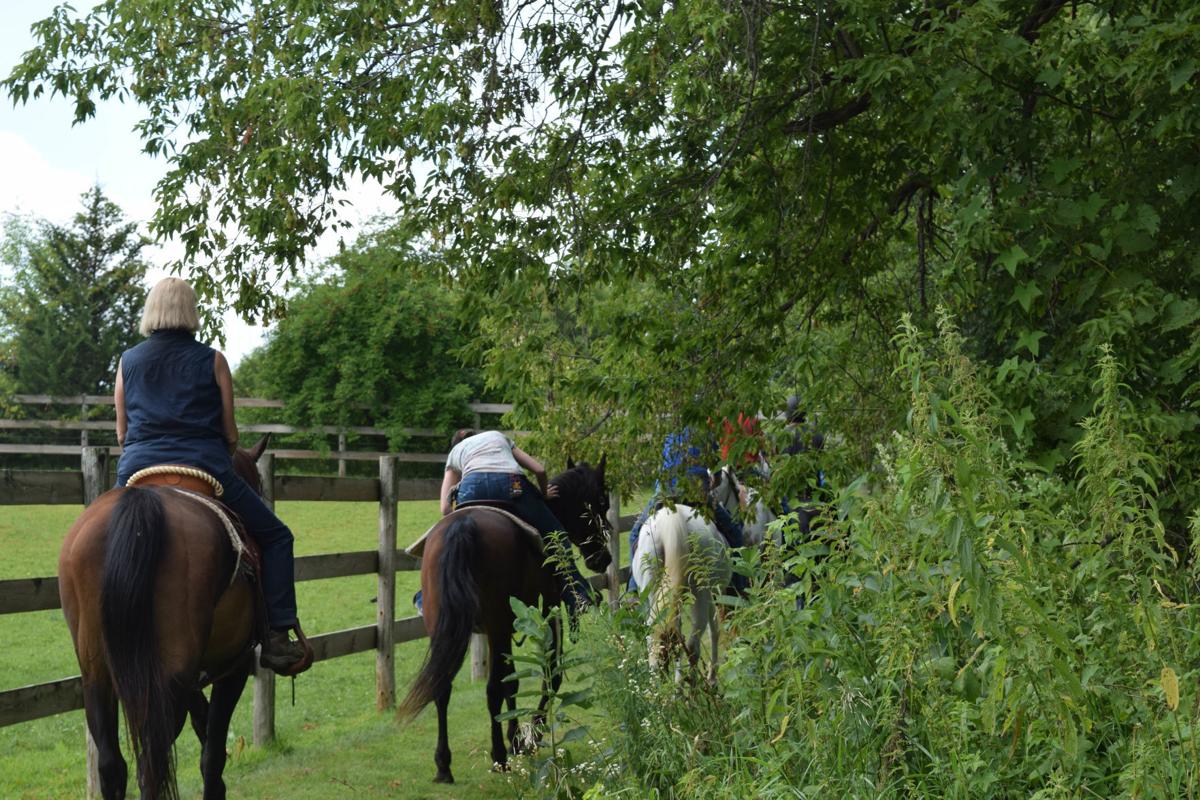 Kristen Eichhorn and her horse Beauty duck to avoid a low tree branch on the Luce Line Trail. 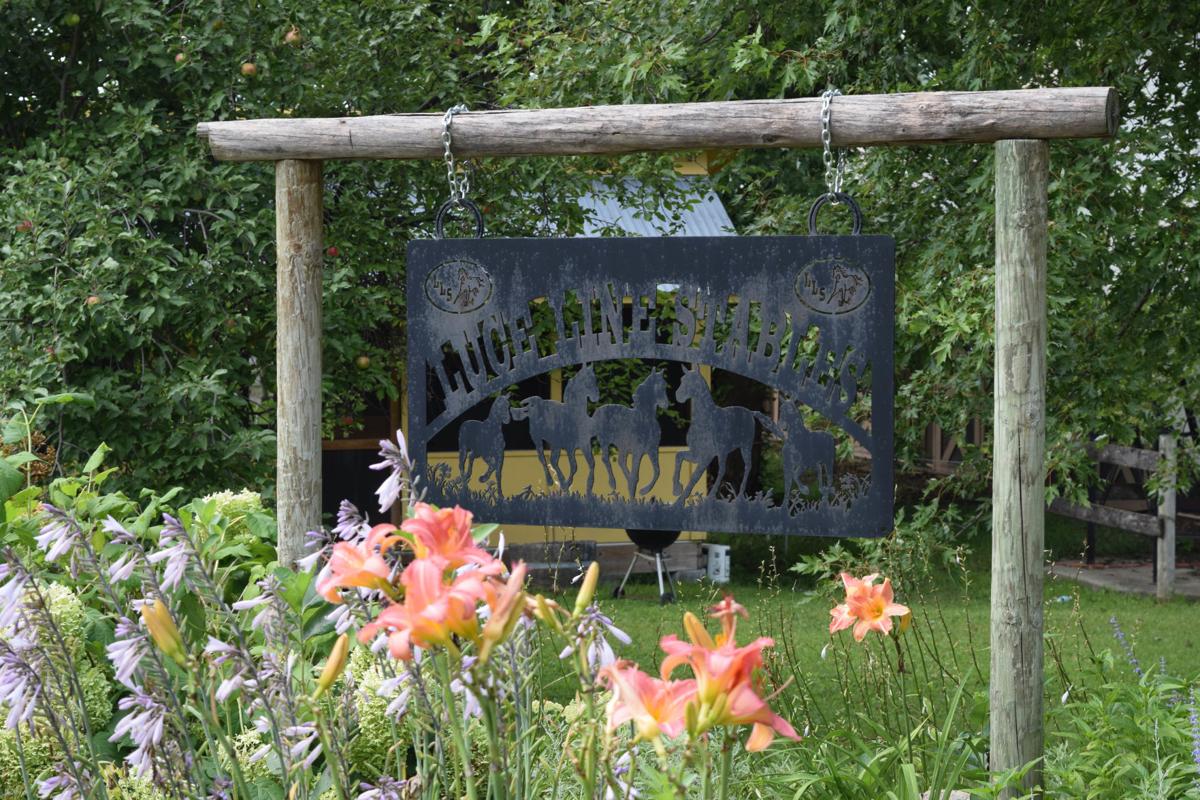 Deb Rockney bought her property in Watertown because of its proximity to the Luce Line horse trail — opening up the Luce Line Stables. Her stable boarders have struggled this summer to use the trail because of maintenance issues.

From left to right, Lorinda Pearson and her horse Super, Eugene Kelly and his horse Beauty, Julia LaRose and her horse Shadow and Ed Chadwick and his horse Joey ride on the Luce Line horse trail. At this point in Watertown, the trail runs alongside the limestone bike path.

Kristen Eichhorn and her horse Beauty duck to avoid a low tree branch on the Luce Line Trail.

Deb Rockney bought her property in Watertown because of its proximity to the Luce Line horse trail — opening up the Luce Line Stables. Her stable boarders have struggled this summer to use the trail because of maintenance issues.

PLYMOUTH — The Luce Line State Trail is known for its horseback riders. Even to bikers and hikers, part of the joy of the trail is the opportunity to see those on horseback.

The trail is 63 miles long, and for 30 miles, from Plymouth to Winsted, there is a crushed limestone trail for bikers and a parallel mowed grass trail for horseback riders.

According to several horseback riders who rely on the 30-mile trail, the horseback portion of the Luce Line hasn’t been well maintained for the past three years. This year has been particularly bad as parts of the trail have been closed for large portions of the summer.

Deb Rockney owns Luce Line Stables in Watertown. She says generally in the spring the trail is closed for up to a few months while the snow and ice are melting and the trail is muddy.

“I’ve been with this barn for 10 years and for the first seven, all I ever did was trail ride and we could go as far west as we chose, as far east as we chose. We never had an issue with mowing and all of a sudden, now you can hardly ever ride down the trail,” Julie LaRose of Excelsior said. LaRose boards her horse at Luce Line Stables.

Luce Line Stables boards horses from all over the metro. Rockney bought land and set up her business there because of its proximity to the trail. Eugene Kelly, of Plymouth, Kristen Eichhorn, of Minnetonka, and Lorinda Pearson, of Eden Prairie, all board their horses at the stables. They chose it because it’s just a step away from the Luce Line, one of the only horse trails in the Twin Cities metro.

The Minnesota Department of Natural Resources manages the upkeep of the Luce Line State Trail. The horse path is grass, sometimes it runs right alongside the limestone bike path and then it diverges into the woods on its own, later meeting up with the limestone path again.

All of the riders mentioned they are primarily worried about safety and that’s why maintenance is such a concern for them. The two main issues are grass that hasn’t been mowed and tree branches that are hanging down and hitting riders in the head while they ride.

“I think the DNR doesn’t have anyone who knows anything about horses,” Kelly said. “They are so concerned that it might be a little muddy and a horse might slip as opposed to we might get our heads knocked off with branches.”

Rachel Hintzman, parks and trails area supervisor for the DNR, told Lakeshore Weekly News this year has been particularly challenging when it comes to maintaining the horse trail because of the large snowmelt in the spring and all the rain the area has gotten this summer.

According to a Aug. 16 tweet from National Weather Service in Chanhassen, 2019 is the wettest year to date in the Twin Cities, since 1871 when rainfall data began being recorded.

One suggestion from Rockney is to add soil or another filler to the areas that get particularly soaked in order to prevent wet areas from popping up year after year.

Hintzman said the DNR is considering this idea, but because of the narrowness of some parts of the trail, the DNR would need special equipment.

Moisture is why portions of the trail have been closed for parts of the summer and other portions haven’t been mowed consistently, Hintzman said. The DNR also has limited resources and the trail is quite long, so it can take some time for employees to mow and upkeep the entire trail, Hintzman explained.

One portion of the trail is still closed between Oak Lake Bridge and County Road 127 in the Watertown area — this area is closed due to wet ground conditions, Hintzman said.

Those who ride horses on DNR trails must purchase horse passes, the passes cost $21 per person for those over the age of 16. Children under 16 do not need a pass.

Kelly says some of the riders’ frustration comes from paying for this pass and not being able to use the trails. Horse passes were introduced in 2006 as a way to add revenue for the state to maintain trails and work on new horse projects.

Money collected from horse riders must go to “the commissioner of natural resources for trail acquisition, trail and facility development, and maintenance, enforcement and rehabilitation of horse trails or trails authorized for horse use, whether for riding, leading, or driving, on land administered by the commissioner,” state law says.

Hintzman said the money does not directly funnel back into the trails in terms of day-to-day maintenance — it goes to specific projects, including overall maintenance, brush management, horse campground improvements and more. The 2018 list of projects can be found here at https://tinyurl.com/y2qzjh52.

Kelly and his fellow equestrians are wondering if riders at other points on the Luce Line State Trail are having the same issues they have. Kelly can be contacted via email at eugenekelly2@gmail.com.

DNR: No horseback riding on the Luce Line State Trail until mid-May

PLYMOUTH — The Luce Line State Trail is closed to horses through the beginning of May.