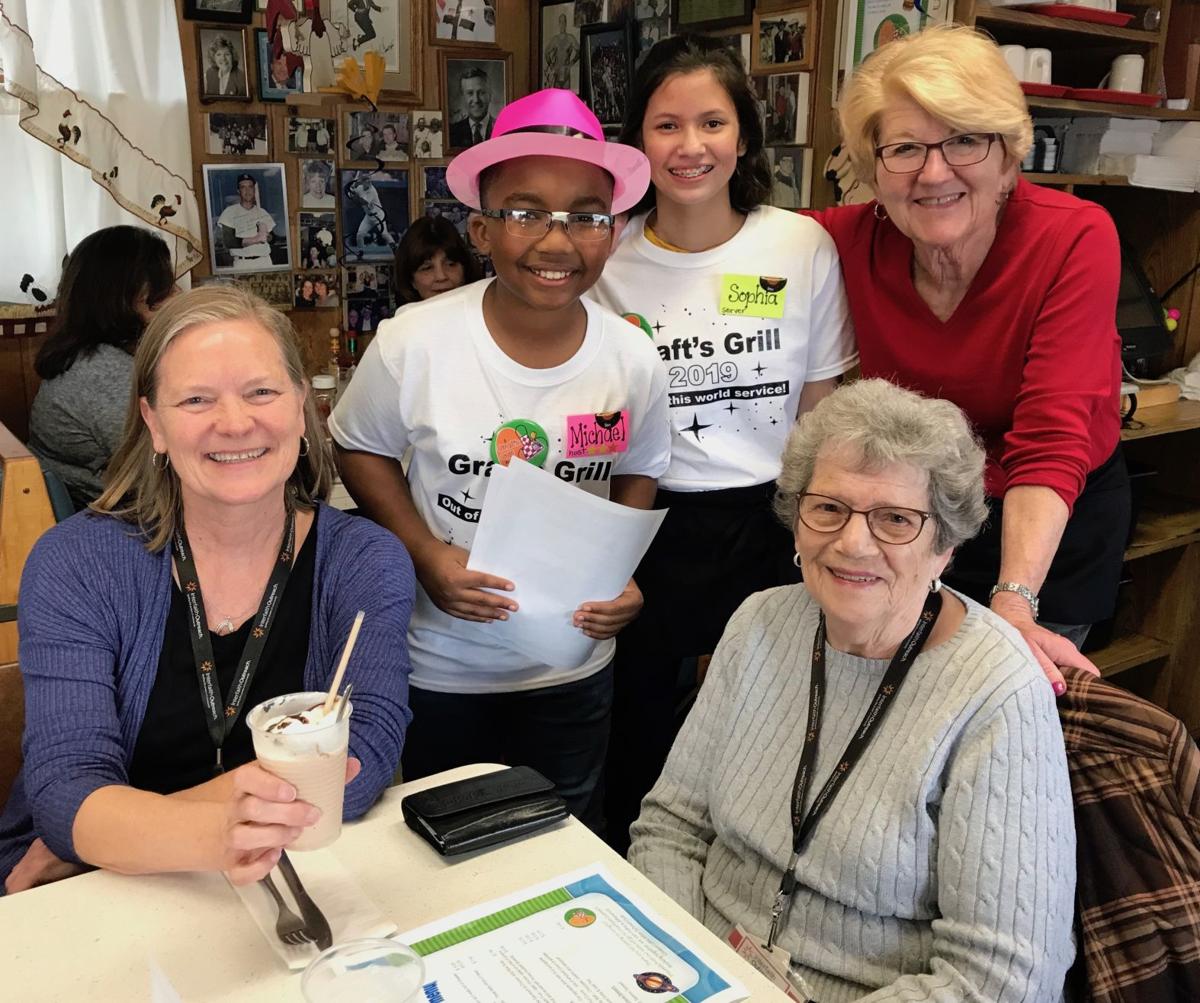 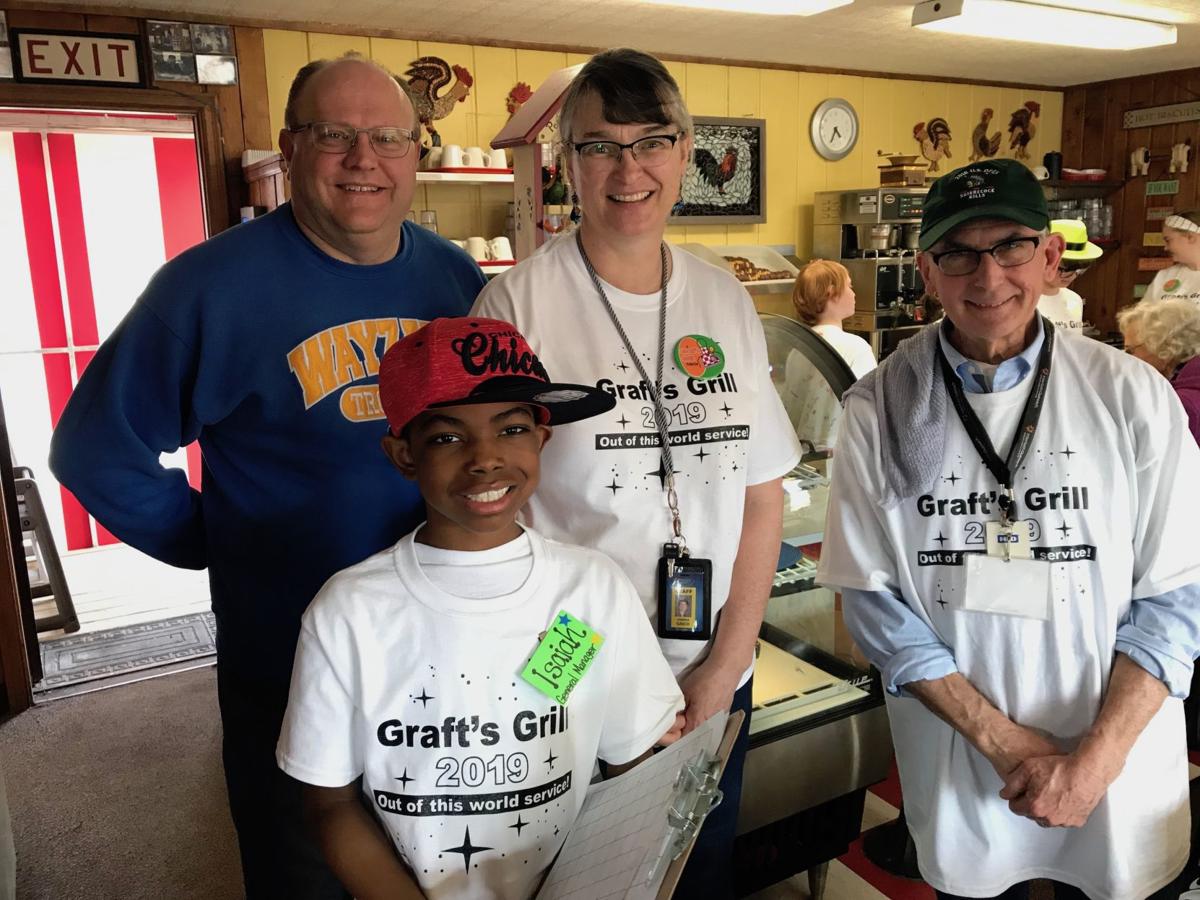 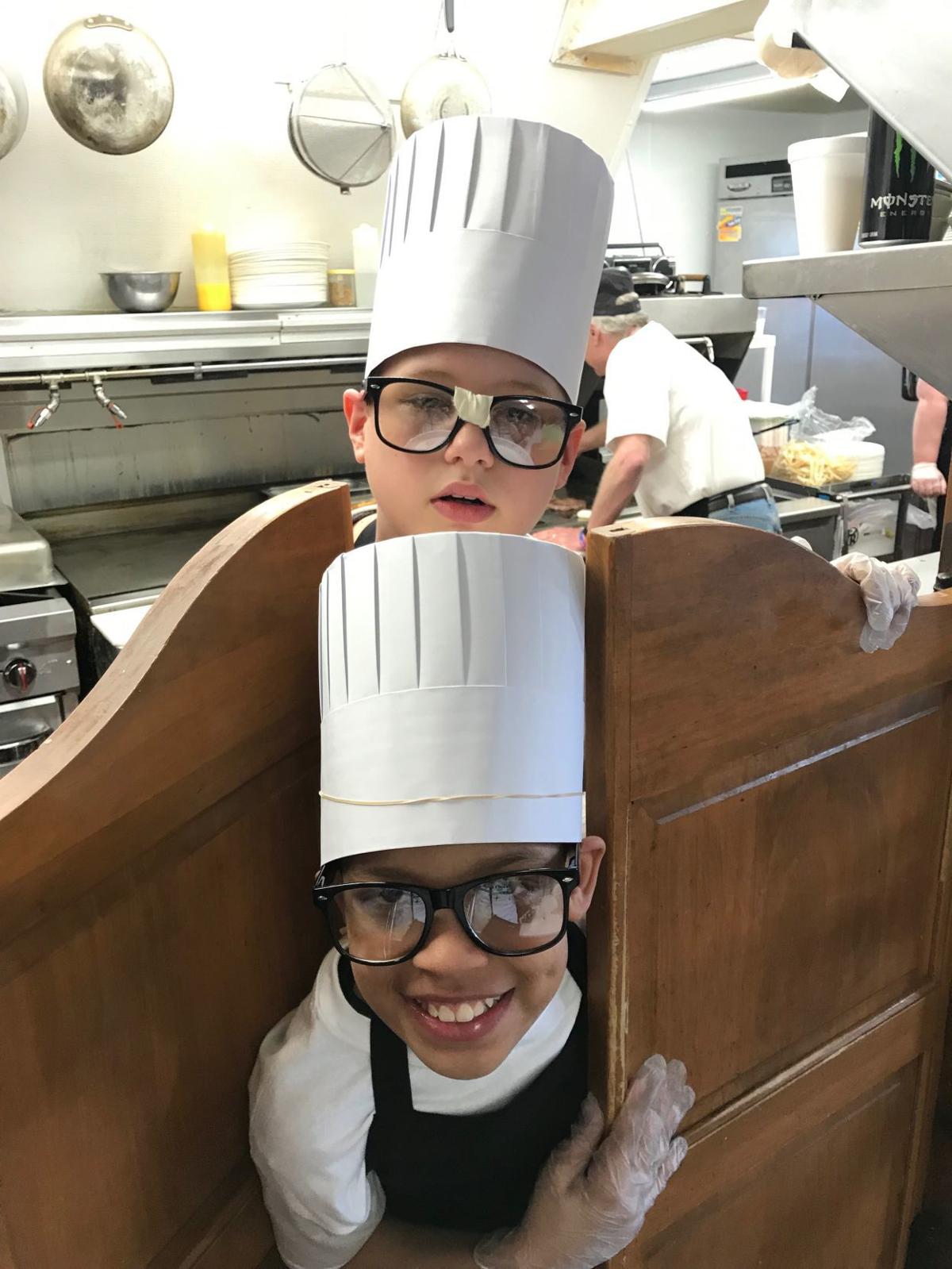 Students Tal Kadlec, top, and Austin Gray wore taped glasses as a tribute to their late art teacher, Thor Hansen, who used to wear broken glasses on theme days. Hansen was the first one to sign up to attend Graft’s Grill, but he died two weeks before the event. 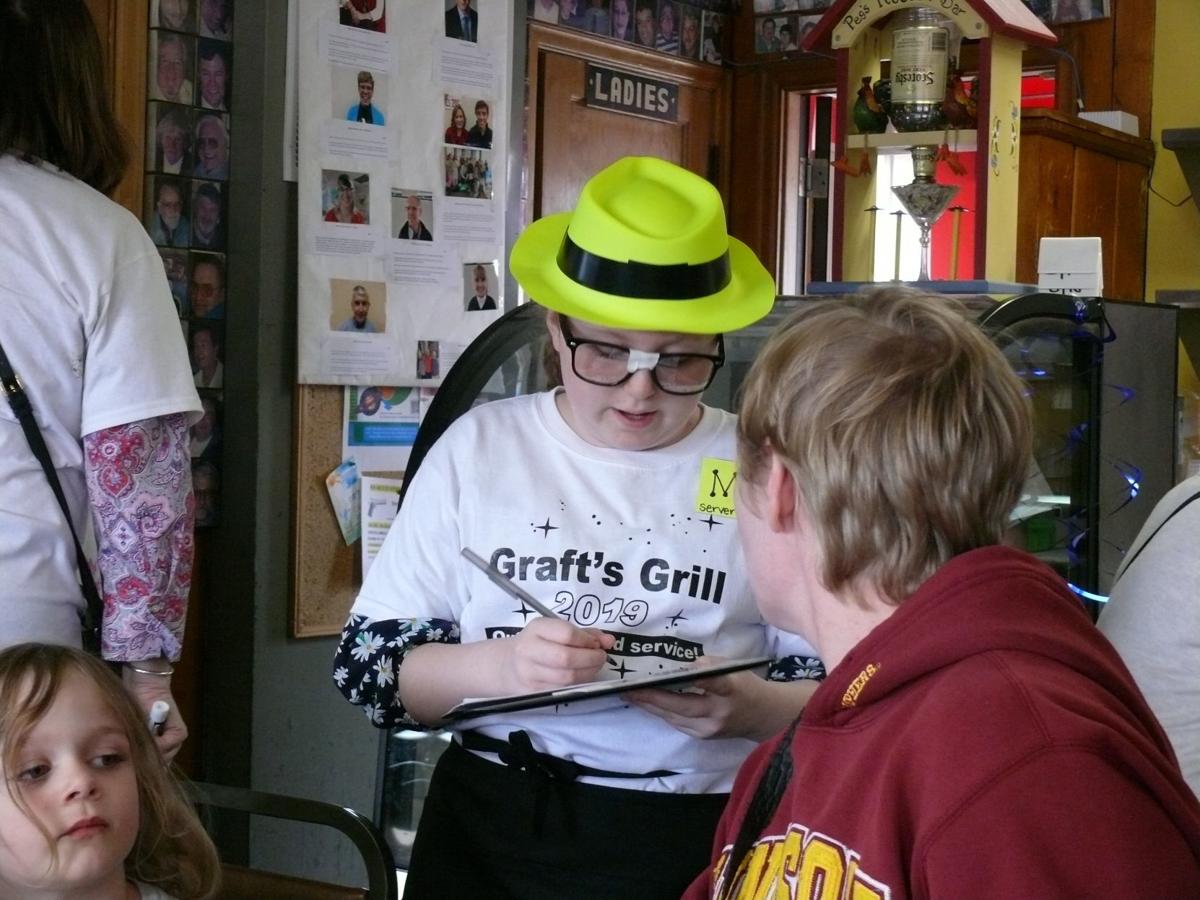 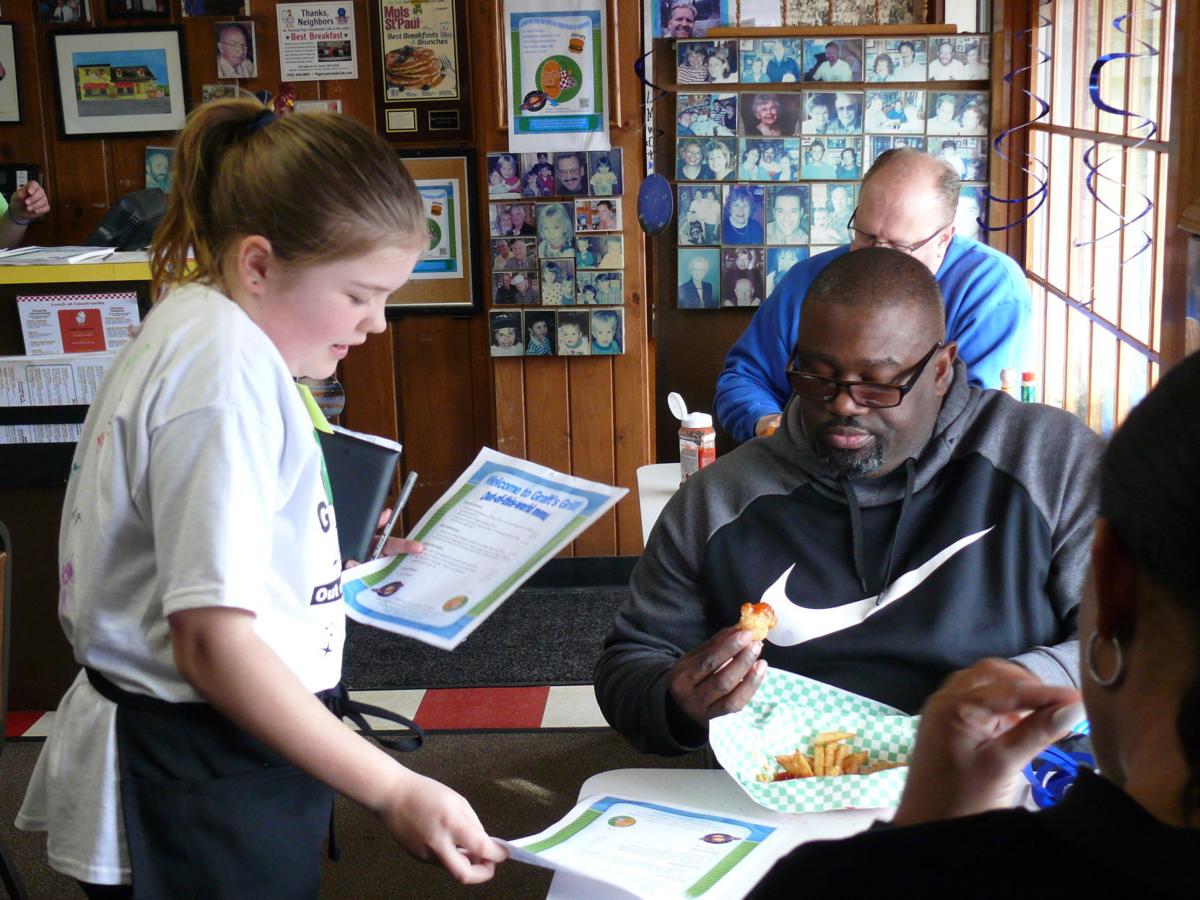 Student Reese Risdal takes an order from a customer at Graft's Grill on March 27. 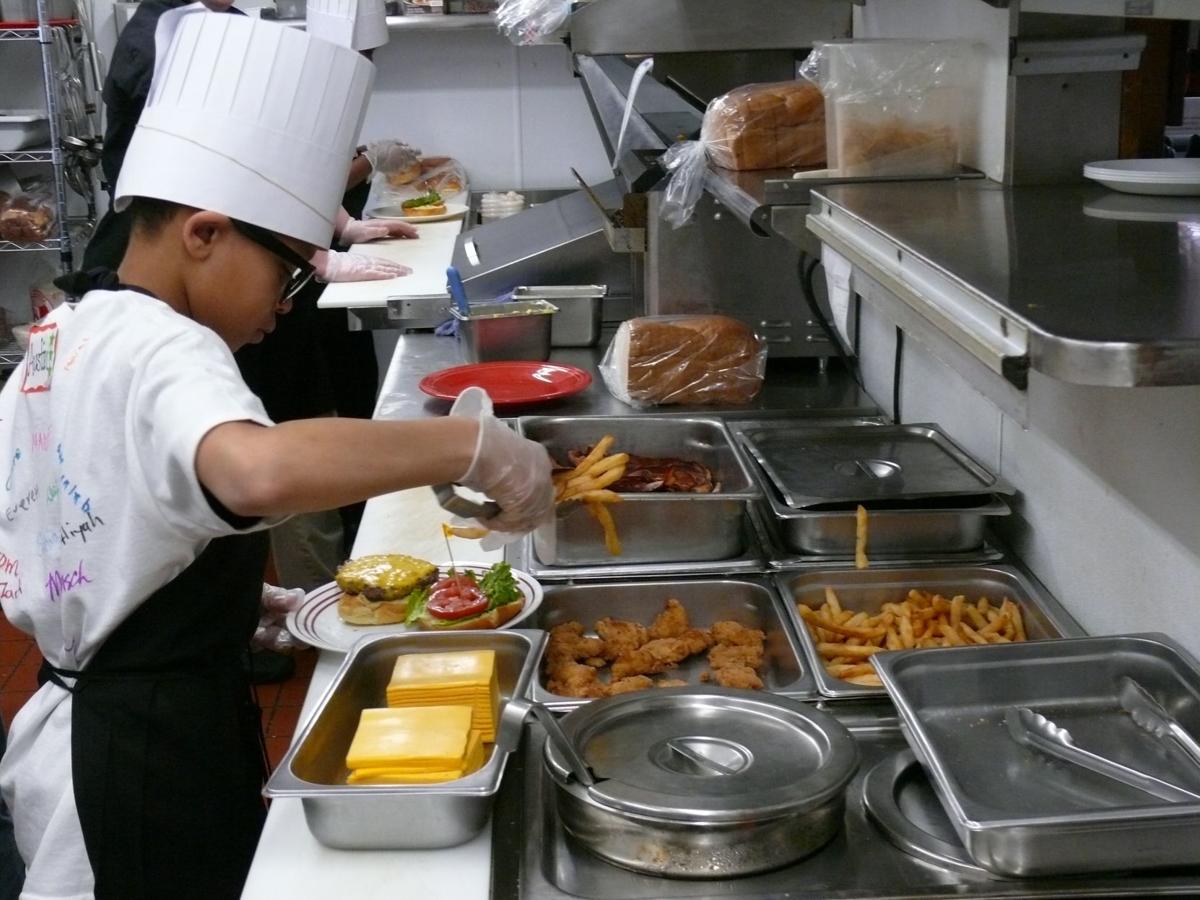 Student Austin Gray prepares a plate for a customer at Graft's Grill on March 27.

Students Tal Kadlec, top, and Austin Gray wore taped glasses as a tribute to their late art teacher, Thor Hansen, who used to wear broken glasses on theme days. Hansen was the first one to sign up to attend Graft’s Grill, but he died two weeks before the event.

Student Reese Risdal takes an order from a customer at Graft's Grill on March 27.

Student Austin Gray prepares a plate for a customer at Graft's Grill on March 27.

HAMEL — Steve Bisecki admitted he wasn’t sure what he was getting into when he was greeted by some youngsters in highly-decorative attire as he entered Peg’s Countryside Café last week.

“All I could think of was, ‘Wow, how cool is this!’ It was so much fun and the kids were really great,” Bisecki, 53, of Plymouth told Lakeshore Weekly News after his dining experience.

“And what those kids are doing is so great too,” he added. “What a tribute; what a purpose; what a wonderful event.”

The Graft’s Grill event launched about 20 years ago and has served as an opportunity for students to learn business skills and the value of community service.

Graft’s Grill was started by and named after Wayzata school teacher Suzanne Graft, who died in 2010. The event is a partnership between the school district, Peg’s Countryside Café and Interfaith Outreach, a human services nonprofit organization that serves the west Hennepin County area.

On March 27, 17 fifth-grade students from Gleason Lake Elementary School’s After School Club, and their supervisors, took over operation of Peg’s Countryside Café for three hours, with proceeds benefiting Interfaith Outreach.

The students had earlier decided to call their event: “Graft’s Grill Out of This World Service.” That led to a menu that included, in part: a celestial cheeseburger, cataclysmic chicken fingers, a gamma-ray grilled cheese sandwich and Jupiter juice.

Isaiah Green, 10, who served as a general manager during the event, said he liked the idea of learning how a real restaurant works.

“I learned about the different jobs and what they do,” he said, adding that he had to keep count of the number of patrons and send workers on breaks. “It was almost like being a real boss.”

Michael Mason, 11, said working in the restaurant “is a lot harder than a lot of people think. It’s kind of hard to communicate sometimes.”

Michael, who said he some day wants to be an aeronautical engineer, served as a host on this particular night, greeting customers at the door, leading them to their tables and offering them menus.

And if there is a complaint? “I’ll just do what I can to make them happy,” Michael said with a wide smile.

Students on this night wore very colorful hats as well as taped glasses in honor of art teacher Thor Hansen, who died on March 12. He had been a teacher at Gleason Lake Elementary since September 2018.

Peg Rasmussen, owner of the café, said she enjoys helping the students learn the basics of running the operation, but misses her friend, Suzanne Graft.

“When Suzanne and I worked on putting this together, I would never have imagined it would have gone this long,” Rasmussen said. “I think she’d be pretty happy to see what this has become and how much effort the kids, teachers and others put into this.

“I always hope they learn some life skills here that they can use along their way,” she added. “It gets to be pretty wild at times, but we all think it’s pretty valuable.”

The concept is for youngsters to learn business skills, such as marketing, promotion and physical labor, as well as developing skills that include teamwork, accountability and initiative.

Rick Graft, Suzanne’s husband and a retired banker, has been part of the program since its inception, teaching curriculum and giving students direction and advice about business and life.

“I talk to them about how to address adults; to enunciate; and how working hard, getting along with each other and giving back to the community are things you should use every day, not just in business, but in life,” he said. “My wife believed so much in this and in kids. I’m honored to continue working with this.”

Strom said Graft’s Grill is important to show students that restaurant work is a viable way to earn money toward higher education.

“Oftentimes, restaurant work is overlooked. It can be a gateway to help paying for that education, which is what we believe all these kids can do,” she said. “It also really helps kids gain confidence and social skills to operate as a team and to learn initiative.”

In total, 226 people attended the Graft’s Grill event, netting a profit of about $1,500, which will go to the great opportunities fund and food shelf at Interfaith Outreach. There was an additional $383 in tips, which will also go to Interfaith, Strom said.

Students involved with the program had to apply, be interviewed and trained for their service work.

“When I interviewed them and asked them a few questions, one was about revenues and profits,” Strom said. “They said they definitely liked profits more.”

PLYMOUTH — A group of local middle school students learned what it takes to run a restaurant all while raising money for a good cause.