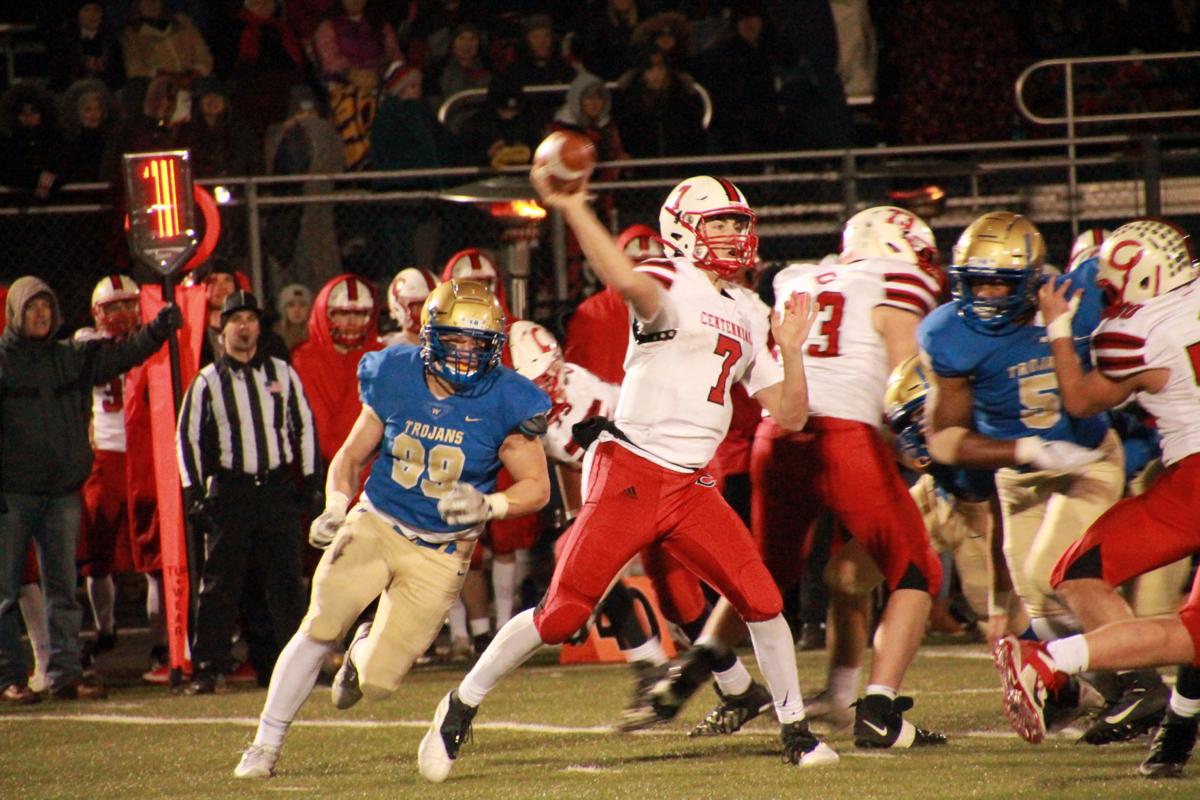 Wayzata senior defensive lineman Joe Demro (No. 99) looks to get around the edge and pressure Centennial quarterback Connor Zulk. 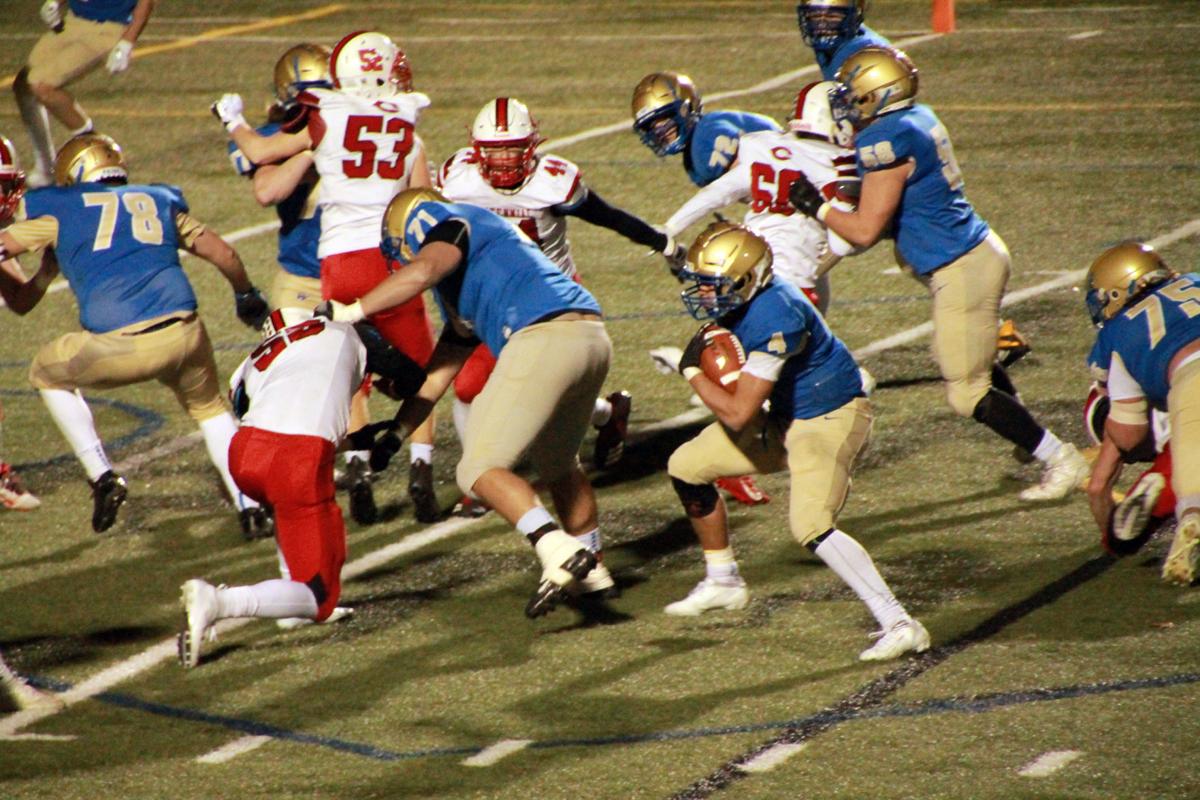 Wayzata senior running back Christian Vasser looks for a hole to run through in the Trojans’ 38-21 victory over Centennial. 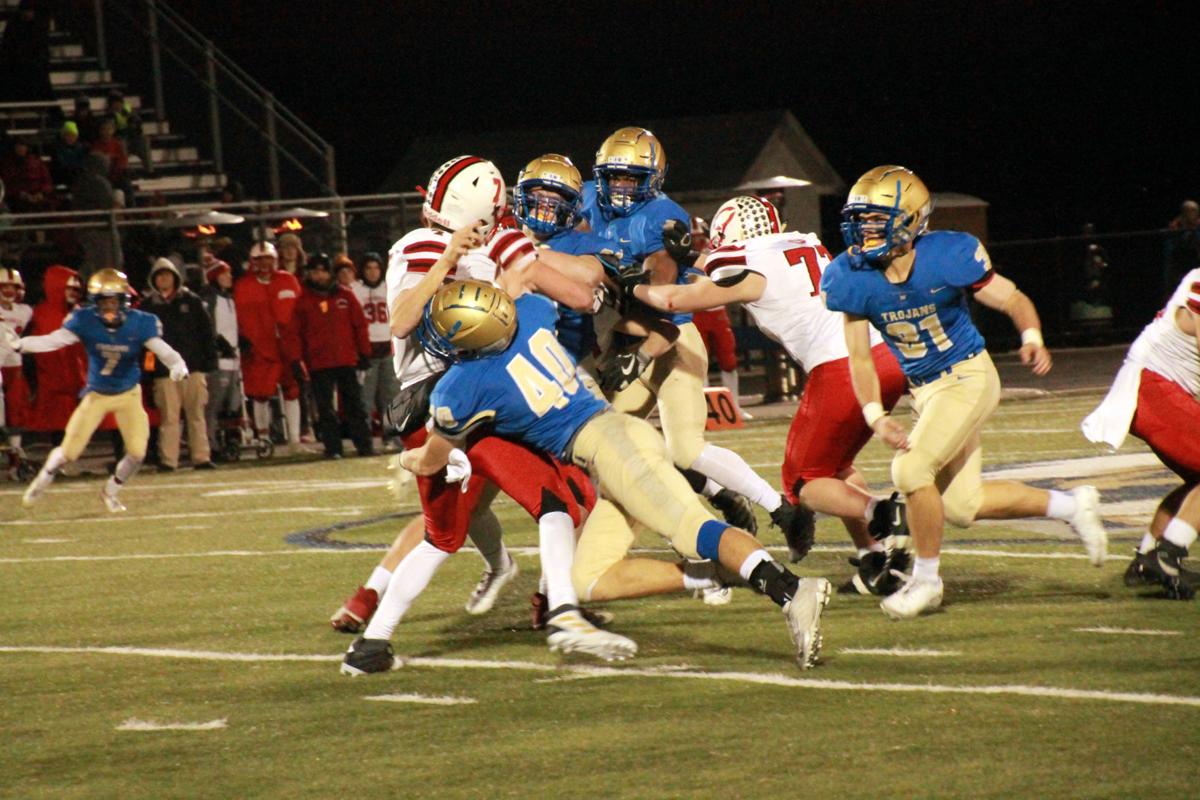 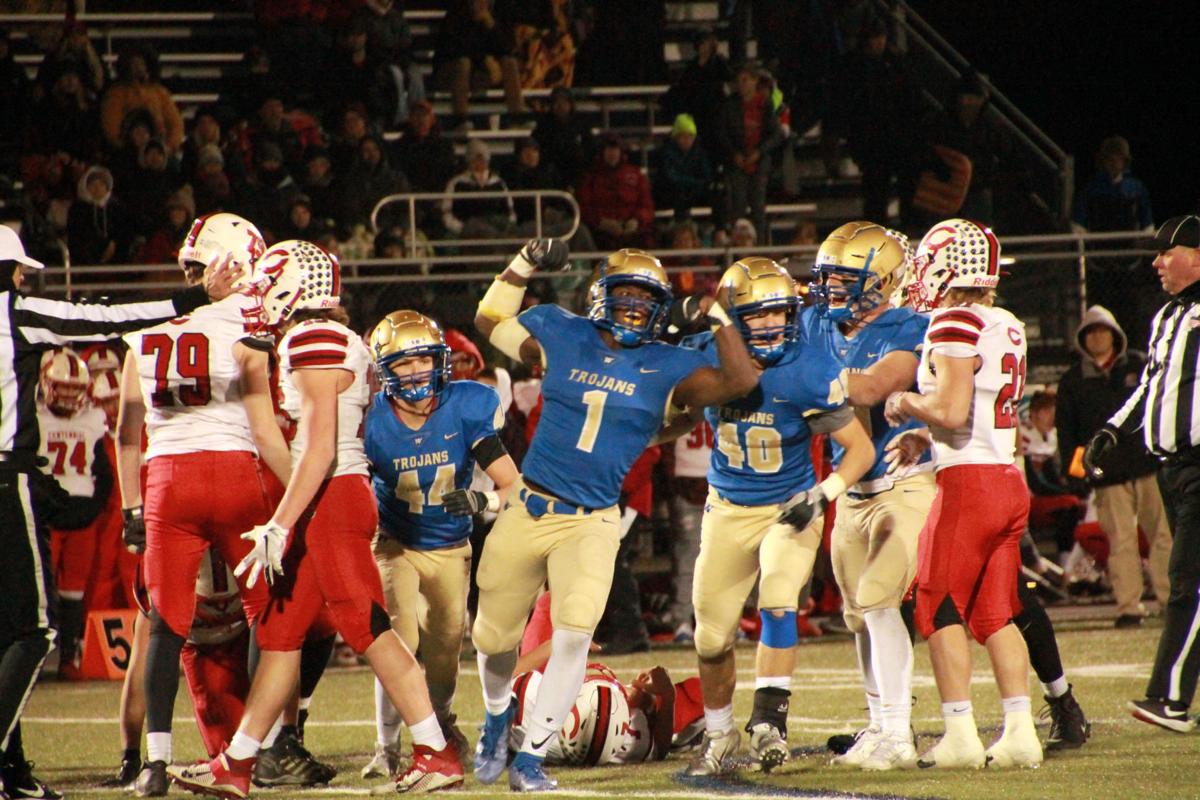 Wayzata senior defensive lineman Joe Demro (No. 99) looks to get around the edge and pressure Centennial quarterback Connor Zulk.

Wayzata senior running back Christian Vasser looks for a hole to run through in the Trojans’ 38-21 victory over Centennial.

A punishing ground game, consistent quarterback play, and an opportunistic defense allowed the Wayzata Trojans to record a 38-21 victory over the Centennial Cougars on Friday, Nov. 9, in a Class 6A state quarterfinal matchup at Chanhassen High School.

The win moves Wayzata’s record to 11-0 and means they will play in the Class 6A state semifinals at U.S. Bank Stadium on Friday, Nov. 15.

“I’m so proud of my brothers — everybody did their job tonight,” senior quarterback Thomas Schmidt said. “I’m in love with this team and I’m so happy that we can go play another week together.”

The upset-minded Cougars showed early on that they weren’t going to be overwhelmed by the moment, but the Trojans seemed to have an answer each time one was necessary.

The Trojans jumped out to a 7-0 lead with a methodical 14-play, 73-yard drive on their first possession. The drive culminated with a 6-yard touchdown pass from Schmidt to junior tight end Luke Bodine.

But it was the Cougars who ended up building a 14-10 lead midway through the second quarter.

The game turned in the final five minutes of the first half, as the Trojans scored twice in a span of two minutes and 40 seconds to take a 24-14 lead at halftime.

Schmidt gave the Trojans a 17-14 lead when he hit senior wide receiver Daeshawn Bush on a slant route.

Then the Wayzata defense, which has been stingy all season long, made arguably the biggest play of the game. Senior linebacker Loshiaka Roques sacked Cougars quarterback Connor Zulk and stripped the ball away at the same time. Sophomore defensive back Drew Berkland scooped the ball up off the turf and sprinted 56 yards for a touchdown and the 10-point halftime lead.

“Big playmakers make big plays and Drew Berkland is a heck of a player,” Schmidt said. “But it’s not just Drew, it’s the whole defense. Everybody did their job to make that play happen.”

Centennial responded in the third quarter with a 20-yard touchdown run on a fourth down and two play, but the Trojans answered almost immediately.

Schmidt connected with senior wide receiver Jacob Wildermuth on a 28-yard pass play and then senior running back Christian Vasser scored on the next play on a 47-yard run.

Vasser, who has been the centerpiece of the Wayzata offense all season, broke three tackles on the play and got a key downfield block by Bush in order to sprint into the end zone.

With the lead stretched to 10 once again at 31-21, the Wayzata defense stiffened up and Vasser and the Wayzata offensive line put the game away.

The Trojans and head coach Lambert Brown used a steady dose of Vasser on a late fourth quarter drive that put the game out of reach after a 3-yard touchdown run by senior workhorse.

Vasser finished the game with 25 carries for 237 yards and the two touchdown runs.

Schmidt completed 7-of-12 passes for 116 yards and two touchdowns.

“I’ve got to give all the credit, and Christian would say the same thing, to the offensive line,” Schmidt said. “Those guys are insane and they bring it every day. They make my job easy, they make Christian’s job easy and they just get it done.”

Vasser’s season rushing statistics explain how valuable the Wayzata offensive line has been this season.

Expect the Trojans’ state semifinal game on Nov. 15 to be won in the trenches. Lakeville South, Wayzata’s opponent, is averaging nearly 300 yards rushing per game this season.

“It’s definitely going to be a hard week of practice with a mentality of doing what we need to do in order to win,” Schmidt said.

While Wayzata and Lakeville South will kickoff at 7 p.m. on Saturday, Nov. 15, the other Class 6A semifinal game between Lakeville North and Champlin Park is schedule for 7 p.m. on Thursday, Nov. 14.

The winners of the two semifinal games this week will play in the Class 6A Prep Bowl at 7 p.m. on Friday, Nov. 29.

*Lakeville High School won state championships in 1988, 1992 and 2003 before the formation of Lakeville North and Lakeville South high schools.