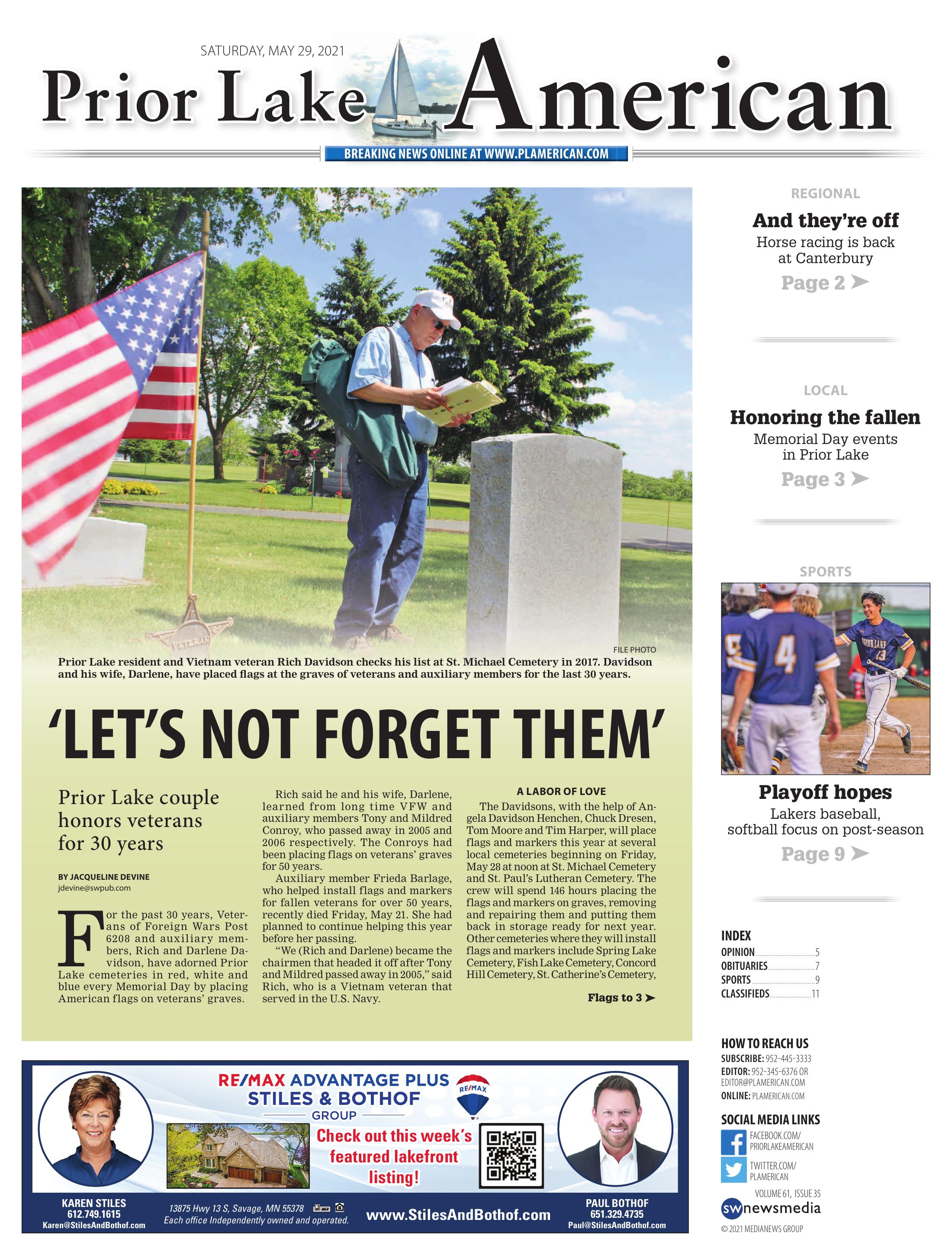 Rich Davidson watches as Chuck Dresen places an American flag at a grave in 2017. Davidson and Dresen are both veterans of the Vietnam war and active in the local VFW Post.

Frieda Barlage, of Prior Lake, places an American flag at the grave of a fallen veteran at St. Michael Cemetery in 2017. Barlage volunteered for the cause for 50 years before passing away this month.

Darlene Davidson, left, and her husband Rich Davidson compare lists of graves that need American flags in 2017. Darlene keeps a database of 1,351 veterans and auxiliary members who have died.

Prior Lake resident and Vietnam veteran Rich Davidson checks his list at St. Michael Cemetery in 2017. Davidson and his wife, Darlene, have placed flags at the graves of veterans and auxiliary members for the last 30 years.

For the past 30 years, Veterans of Foreign Wars Post 6208 and auxiliary members, Rich and Darlene Davidson, have adorned Prior Lake cemeteries in red, white and blue every Memorial Day by placing American flags on veterans' graves.

Rich said he and his wife, Darlene, learned from long time VFW and auxiliary members Tony and Mildred Conroy, who passed away in 2005 and 2006 respectively. The Conroys had been placing flags on veterans' graves for 50 years.

Auxiliary member Frieda Barlage, who also helped install flags and markers for fallen veterans for over 50 years, recently died Friday, May 21. She had planned to continue helping this year before her passing.

"We (Rich and Darlene) became the chairmen that headed it off after Tony and Mildred passed away in 2005," said Rich, who is a Vietnam veteran that served in the U.S. Navy.

A labor of love

The Davidsons, with the help of Angela Davidson Henchen, Chuck Dresen, Tom Moore and Tim Harper, will place flags and markers this year at several local cemeteries beginning on Friday, May 28 at St. Michael Cemetery and St. Paul's Lutheran Cemetery. The crew will spend 146 hours placing the flags and markers on graves, removing and repairing them and putting them back in storage ready for next year.

Darlene said she keeps a database of 1,351 veterans and auxiliary members who have died. The 1,351 names will be read Memorial Day at the remembrance ceremony at Memorial Park in Prior Lake after the parade hosted by the city and VFW Post 6208.

"I always naturally read the obituaries in the Prior Lake American and I always check the websites of a lot of the funeral homes," said Darlene. "The VFW Color Guard does services for veterans in the area. They give them a military funeral honors and that's how we get most of our names as well."

Rich said it's important to honor the men and women who gave up their life for their country.

"They're the true heroes. They took a bullet for our country. A lot of them never came back home — a lot did and they kept serving their community through the VFW or through the different veteran organizations," he said. "Basically, Memorial Day is to honor the fallen veterans, so let's not forget them." 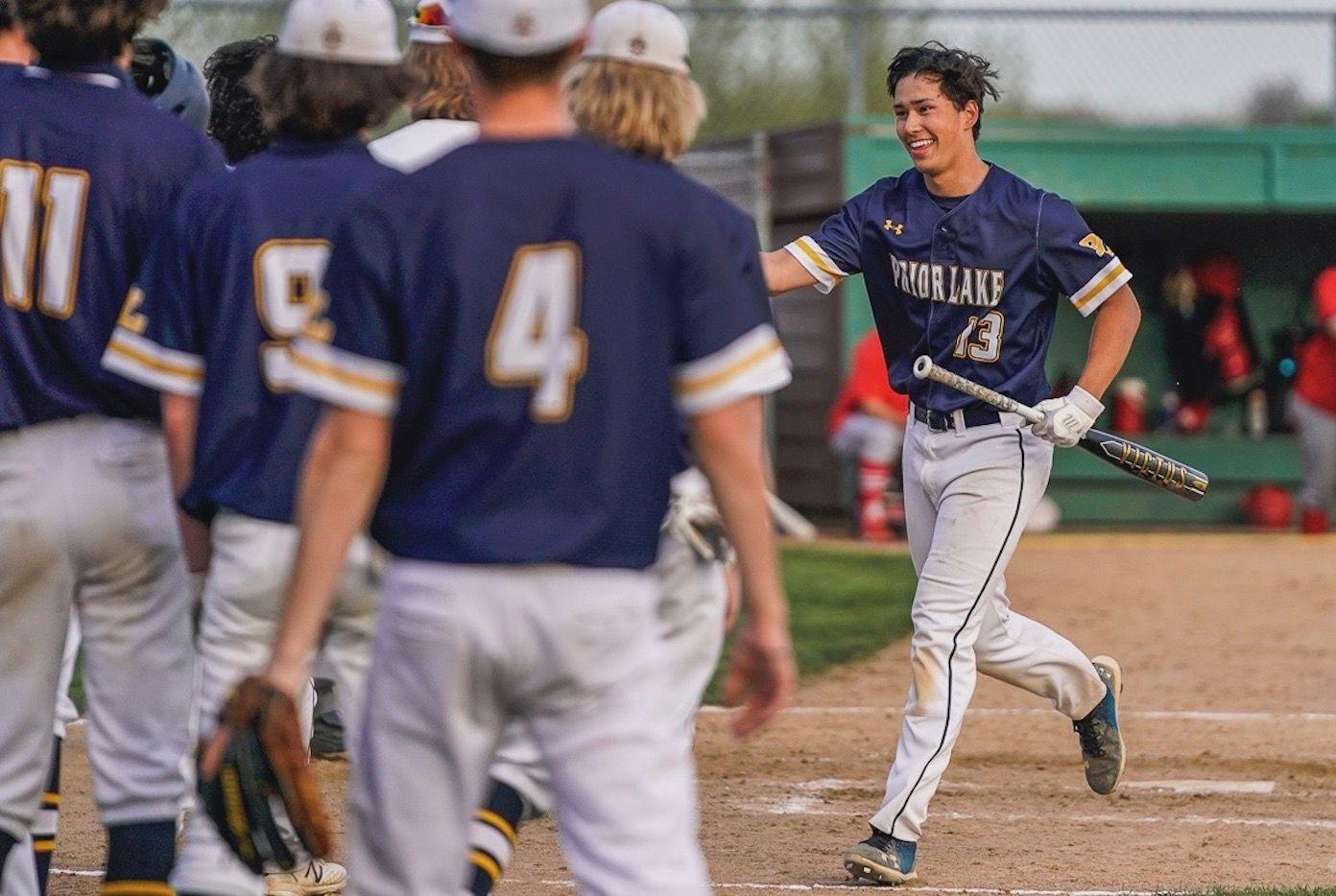 Lucas Houske is met at home plate by his teammates after a home run in Prior Lake’s 7-2 win over Coon Rapids back on May 2.