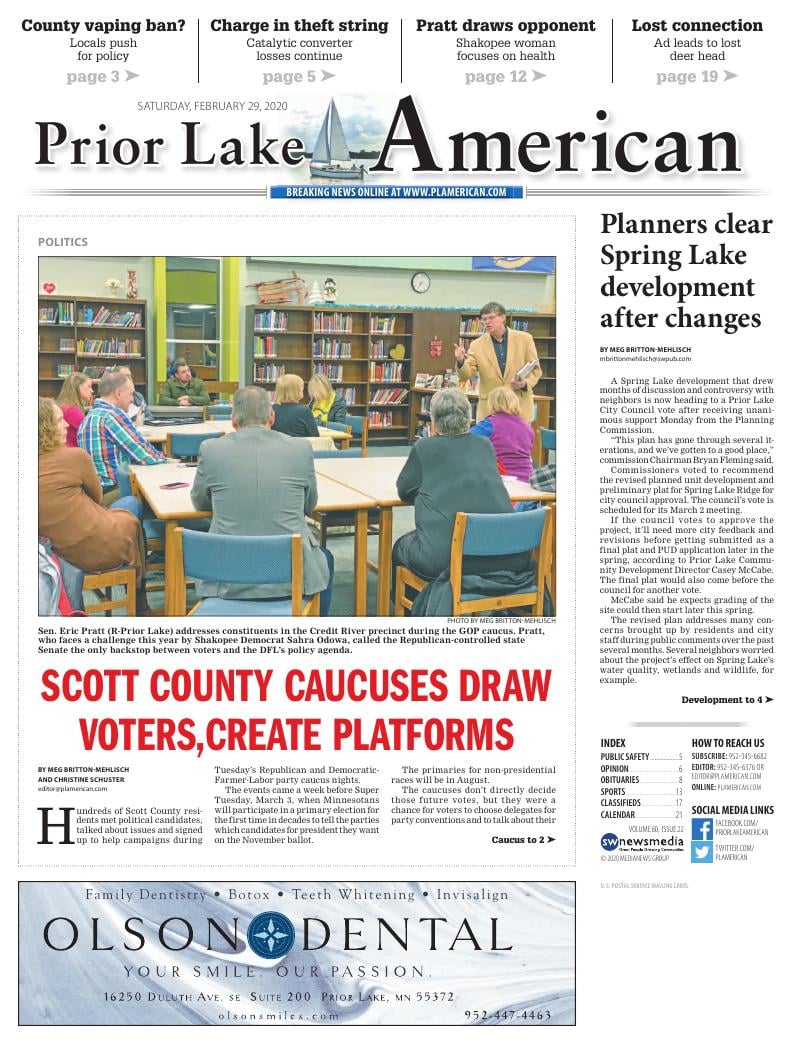 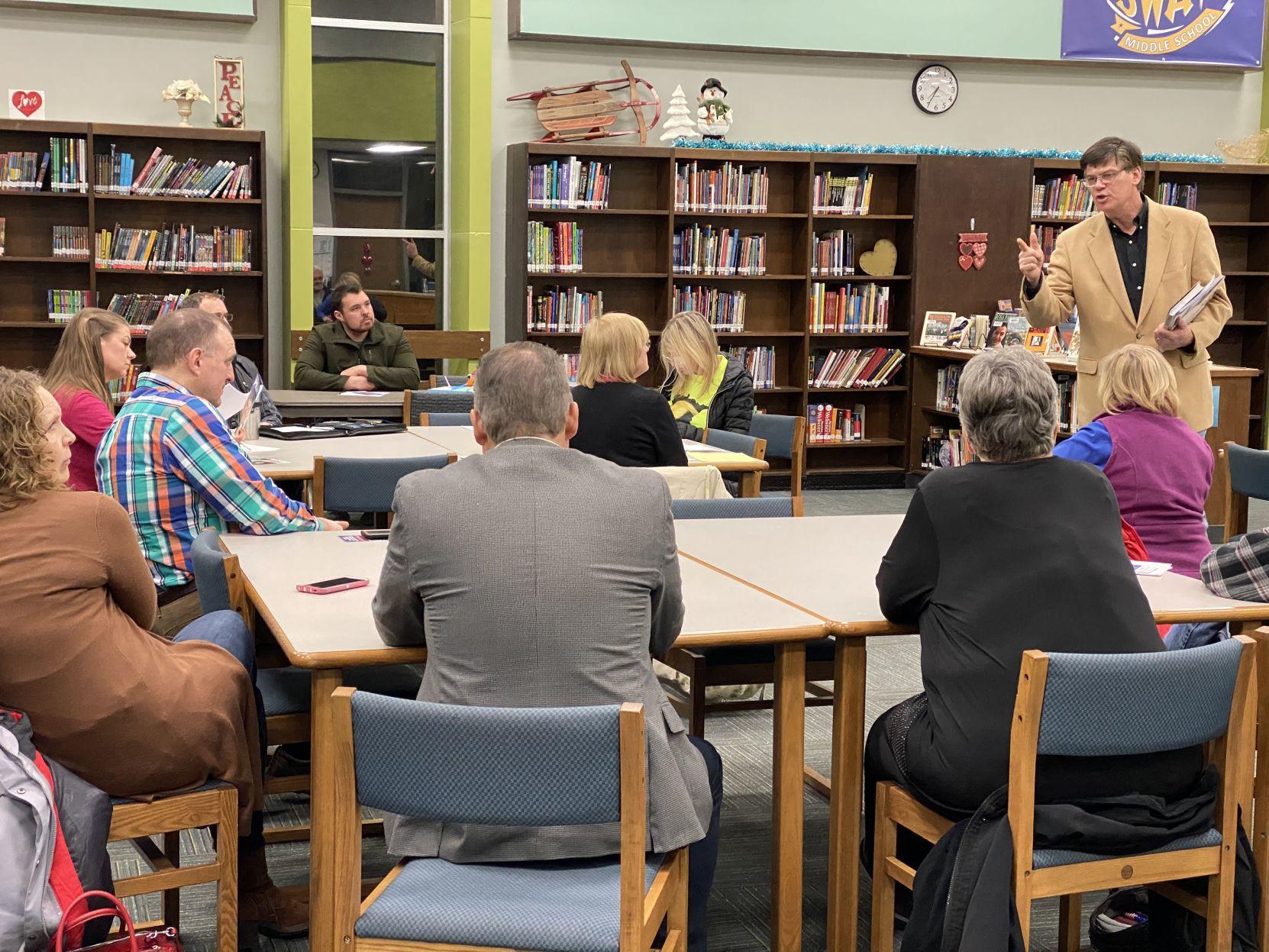 Sen. Eric Pratt (R-Prior Lake) addresses constituents in the Credit River precinct during the GOP caucus. Pratt, who faces a challenge this year by Shakopee Democrat Sahra Odowa, called the Republican-controlled state Senate the only backstop between voters and the DFL’s policy agenda.

Cattails catch the last sunlight of a recent day near Spring Lake's western shore. A proposed development of around 100 homes in the area has drawn opposition from some neighbors worried about the project's impact on wetlands, wildlife and water quality.

A Spring Lake development that drew months of discussion and controversy with neighbors is now heading to a Prior Lake City Council vote after receiving unanimous support Monday from the Planning Commission.

“This plan has gone through several iterations, and we’ve gotten to a good place,” commission Chairman Bryan Fleming said.

Commissioners voted to recommend the revised planned unit development and preliminary plat for Spring Lake Ridge for city council approval. The council’s vote is scheduled for its March 2 meeting.

If the council votes to approve the project, it’ll need more city feedback and revisions before getting submitted as a final plat and PUD application later in the spring, according to Prior Lake Community Development Director Casey McCabe. The final plat would also come before the council for another vote.

McCabe said he expects grading of the site could then start later this spring.

The revised plan addresses many concerns brought up by residents and city staff during public comments over the past several months. Several neighbors worried about the project’s effect on Spring Lake’s water quality, wetlands and wildlife, for example.

Winkler Land Company, the property owner and developer, reduced the number of units from 101 to 99, increased the lot sizes, added more trees to be planted in the property’s outlots and along Marschall Road, and agreed to make public snowmobile crossing improvements.

Winkler this week declined to comment on the project and its changes until after the council vote.

In a memo attached with the commission’s packet on the project, Minnesota Department of Natural Resources hydrologist Jennie Skancke called the new plan “a really good PUD.”

“I think the long-term benefit for the area is so much greater than going with traditional development,” Skancke said. “The public will benefit from the large amount of open space being preserved, a fair amount of tree preservation, and there is a good tree-stand diversity preserved, too.”

A PUD allows a developer to diverge from the city’s planning and development standards, in this case allowing Winkler to create smaller and closer lots. All PUDs must demonstrate that such changes benefit the community.

The Scott County Highway Department also shared its support for the plan.

Winkler also promised to escrow funds for a future public street sealcoating project to extend the life of roads within the development.

“They would be funding the initial cost for the first sealcoating to be done,” City Planner Jeff Matzke told the commission. “That’s not something we have currently within our city fee schedule.”

Commissioner William Kallberg said he’d “never seen as many different issues as were brought up in this project,” but he and the other commissioners commended the developer on working with city staff and residents to present something the commission could get behind.

Christian Morkeberg, a Spring Lake Association board member and chairman of the Prior Lake-Spring Lake Watershed District’s Citizen Advisory Committee, said the approved plan wasn’t perfect but is probably the best compromise possible.

“Overall, I feel like the Prior Lake city has put in hard work and done a very good job,” he said Wednesday, also praising the developer for adjusting to some of his community’s concerns.

What matters next is making sure construction is done responsibly, he added, and he’s confident the city will do so. 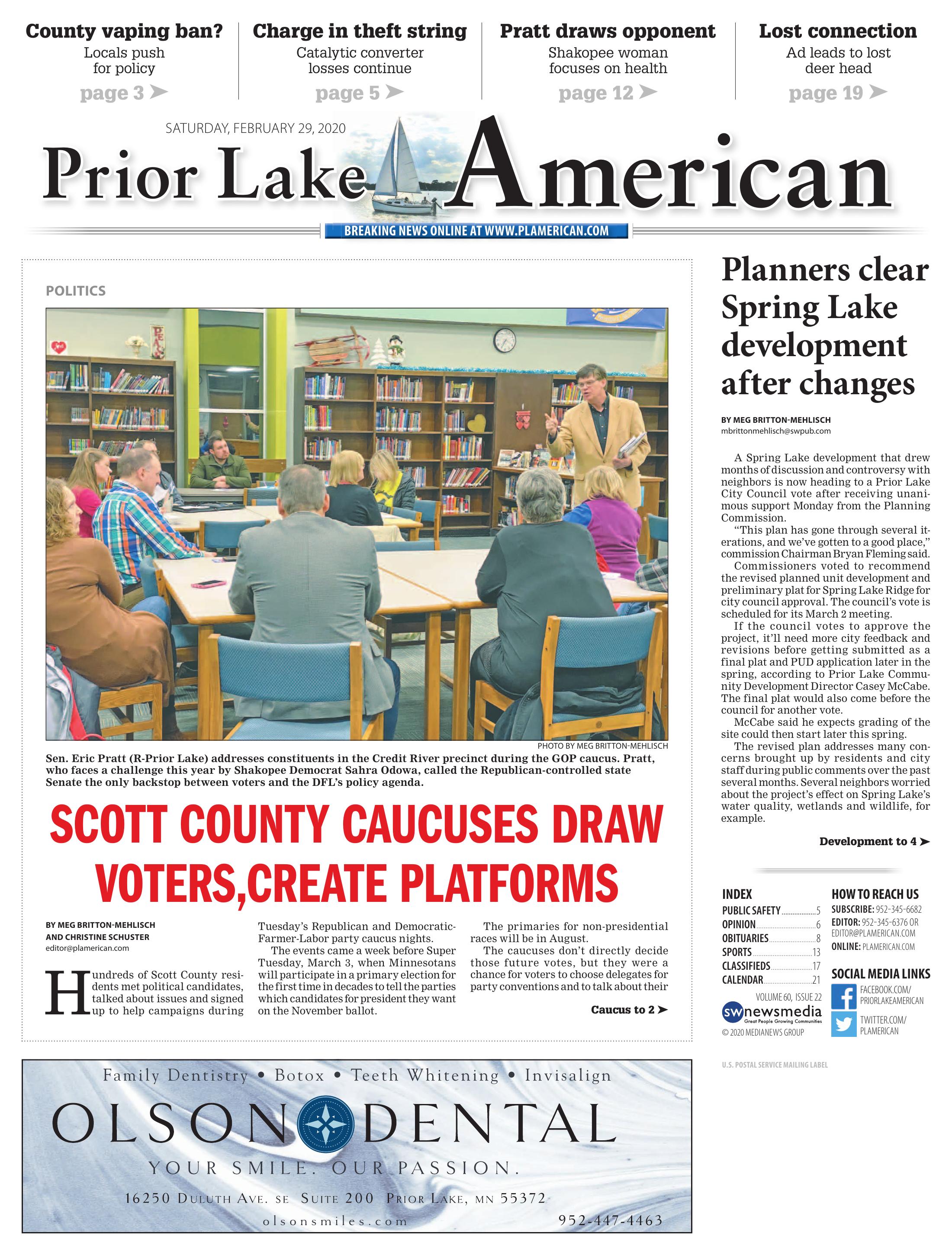