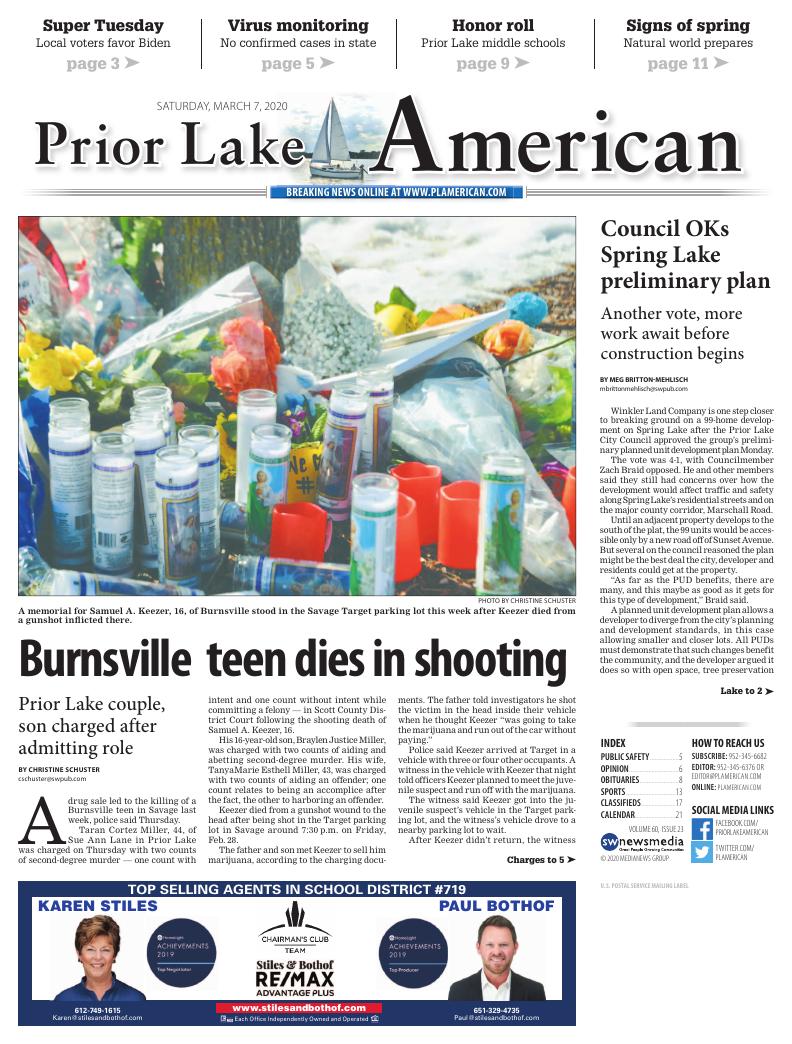 A drug sale led to the killing of a Burnsville teen in Savage last week, police said Thursday.

Taran Cortez Miller, 44, of Sue Ann Lane in Prior Lake was charged on Thursday with two counts of second-degree murder — one count with intent and one count without intent while committing a felony — in Scott County District Court following the shooting death of Samuel A. Keezer, 16.

Keezer died from a gunshot wound to the head after being shot in the Target parking lot in Savage around 7:30 p.m. on Friday, Feb. 28.

The father and son met Keezer to sell him marijuana, according to the charging documents. The father told investigators he shot the victim in the head inside their vehicle when he thought Keezer “was going to take the marijuana and run out of the car without paying.”

Police said Keezer arrived at Target in a vehicle with three or four other occupants. A witness in the vehicle with Keezer that night told officers Keezer planned to meet the juvenile suspect and run off with the marijuana.

The witness said Keezer got into the juvenile suspect’s vehicle in the Target parking lot, and the witness’s vehicle drove to a nearby parking lot to wait.

Officers were called to Target around 7:30 p.m. that evening. Multiple witnesses reported hearing what sounded like a firecracker before seeing the victim on the ground, Savage Police Chief Rodney Suerer said later.

Officers found the male bleeding heavily with critical head injuries. Keezer was able to say his name and that his head hurt before he began vomiting. He was transported to Hennepin County Medical Center, where he was placed on life support and later died. 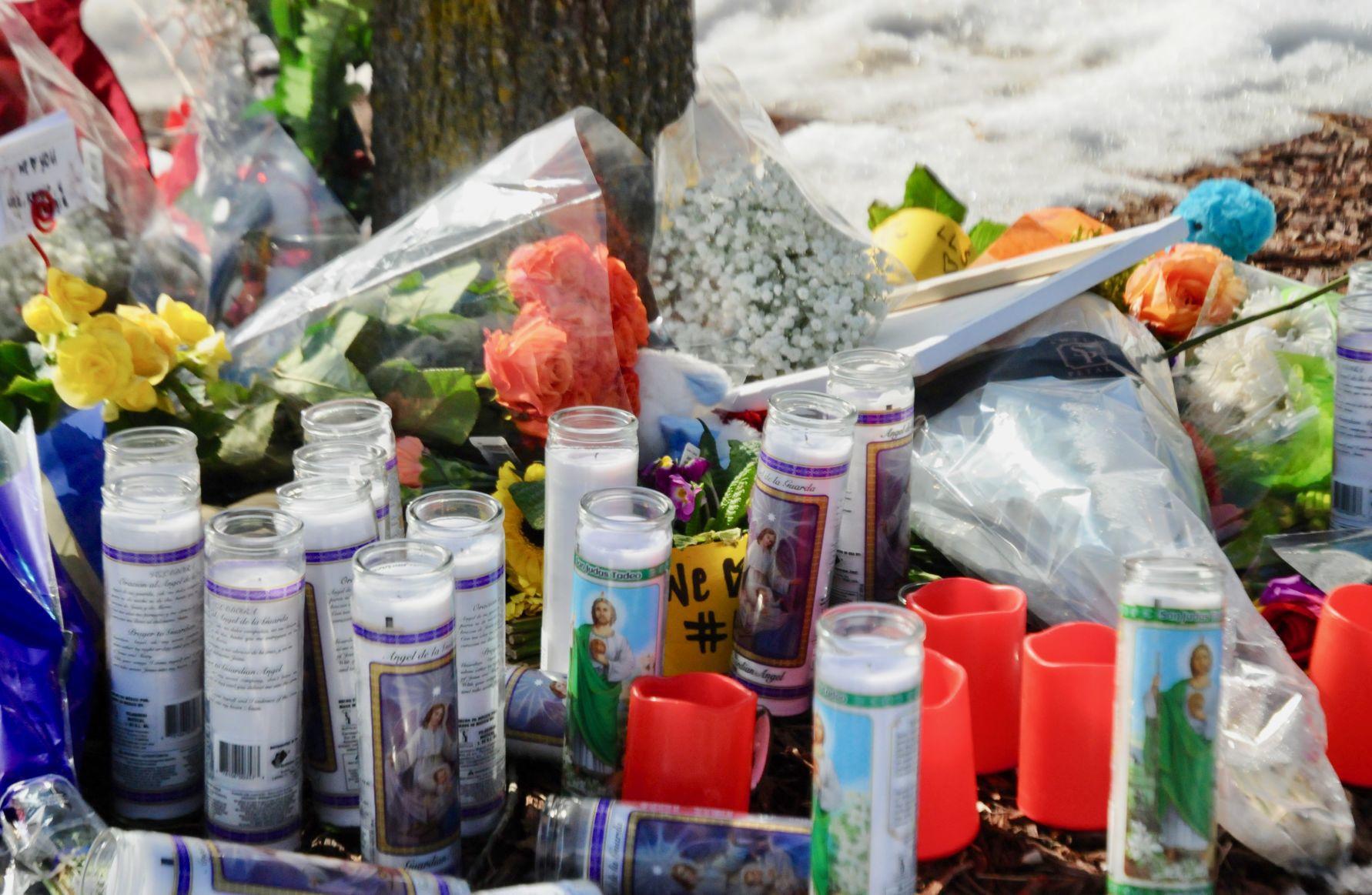 On Monday evening, Keezer’s family and friends gathered in the Target parking lot for a vigil. “We love Sam” and “Sam’s World” were among the messages left a memorial made of flowers, candles and notes.

An obituary described the teen as “independent, confident, funny, and fearless” and “the most amazing son his parents could have asked for.”

Police connected the suspect vehicle to Braylen Miller. They were waiting to execute a search of the family home and garages spotted Braylen Miller running near his house, where they arrested him.

The teen told police he went to St. Paul with his father to buy the marijuana to sell to Keezer.

Keezer initially didn’t show up to their first meeting place, the juvenile said, and suggested Target. The son said his father told him to go inside the house and get a gun.

When Keezer got into the front passenger seat of their vehicle at Target, he kept the door ajar while handling the marijuana. Braylen Miller stated his dad shot Keezer in the head, then pushed him out of the vehicle, police said.

Taran Miller then told his son to drive away and called his wife, Tanya Marie Miller, to tell her what happened.

When they got back home, Tanya Miller went to the neighbor’s house to get her garage key, then the family hid the vehicle in the garage. The juvenile said his mom talked to his sister about taking the firearm.

He said he disposed of the bullet casing left in his vehicle and gave the firearm to his sister-in-law at her home in Mankato. His wife drove him.

Officers recovered the murder weapon in a black lock box in the Mankato home.

In a statement to officers, Tanya Miller said she knew her husband sold drugs with their son and that her husband had a gun.

Law enforcement took Taran Miller into custody during a traffic stop shortly before 3 p.m. Tuesday at 160th Street and Sue Ann Lane, according the arrest data.

No confirmed cases in state

John Anderson, a representative of Winkler Land Company and resident of Prior Lake, defends the development proposal before a packed City Hall last year. The City Council this week approved a preliminary planned unit development plan for the project.

Winkler Land Company is one step closer to breaking ground on a 99-home development on Spring Lake after the Prior Lake City Council approved the group’s preliminary planned unit development plan Monday.

The vote was 4-1, with Councilmember Zach Braid opposed. He and other members said they still had concerns over how the development would affect traffic and safety along Spring Lake’s residential streets and on the major county corridor, Marschall Road.

Until an adjacent property develops to the south of the plat, the 99 units would be accessible only by a new road off of Sunset Avenue. But several on the council reasoned the plan might be the best deal the city, developer and residents could get at the property.

“As far as the PUD benefits, there are many, and this maybe as good as it gets for this type of development,” Braid said.

A planned unit development plan allows a developer to diverge from the city’s planning and development standards, in this case allowing smaller and closer lots. All PUDs must demonstrate that such changes benefit the community, and the developer argued it does so with open space, tree preservation and other details.

The next step for Winkler will be to work with the city on final feedback and revisions. Once that’s done, a final plat and PUD application will be submitted to the council for a vote.

Project manager John Anderson said work on the site should begin in May with grading the plat and putting in streets, sewer and water utilities. Winkler hopes to have all the building permits for the first phase of homes by the fall. Anderson said full build-out of all the homes should occur sometime between 2024 and 2025.

“We’re moving forward, and we think it’s going to be a good project overall,” Anderson said. “It’s a very nice lot and addition to the community.”

WSB traffic consultant Chuck Rickart conducted a traffic study in September that found the project would increase the average daily traffic volume on Sunset from 260 vehicles per day in 2019 to 1,200 in 2021 and 2,400 in 2040, he told the council.

The study assumed a new road off of Sunset would go through the planned development and that the property to the south of Spring Lake will be developed.

With the added traffic to and from the development, cars leaving Sunset Avenue to turn on to County Road 12 will likely block access to Shoreline Boulevard and create a small backup during morning and evening peak hours.

Even so, Rickart said that “those intersections would be operating at satisfactory levels.”

Rickart said the nearby intersection of Marschall Road and County Road 12 intersection wasn’t included in the study, but an additional 30 vehicles in the morning and 75 in the evening would likely go through there.

“I’m really concerned about that intersection’s ability to eat people in the next number of years until a traffic light goes in,” Councilmember Kevin Burkart said. “But apparently that was not part of this project.”

Anderson said in an interview Thursday that while he understood the concern over the intersection, it was a topic that needed to be handled at a higher level and not something specifically related to the development.

“That’s more of a bigger picture item, because we’re close to it we kind of got brought into that discussion” Anderson said. “Long term it’s not just this development that will impact that intersection.”

The study concluded that even with the additional traffic, the intersection between the new road and Sunset Avenue wouldn’t have enough for an all-way stop or traffic signal. Rickart said a roundabout could be helpful if safety becomes an issue.

“I really don’t like the traffic going on to Sunset,” Councilmember Warren Erickson said, noting he’ll see the impact firsthand from his nearby home. “But based on what I see here, I’ll have to go along with it just because if we don’t, they can develop it without a PUD and it would not be as good a plan as it is.”

Several residents came to the meeting to speak, but there was no public comment because the development had already received a hearing. Following the meeting, some approached the developer representative to say they appreciated the plan’s compromises.

In terms of the environmental impact on Spring Lake, the plan has been greatly improved over the last several months, they said.

Christian Morkeberg, a Spring Lake Association board member, has worked for months on his own to draw attention to the forest, native birds and aquatic wildlife and water quality. Now that the PUD has been approved, the important thing is how the developer follows through.

“I think we are all walking away from here feeling a little exhausted but happy that we were able to find a good compromise,” Morkeberg said. “When you look at other cities, I don’t think that it often goes this well.”

Editor’s note: A previous version of this article misstated which councilmember voted against the plan. Councilmember Zach Braid was the lone nay vote. 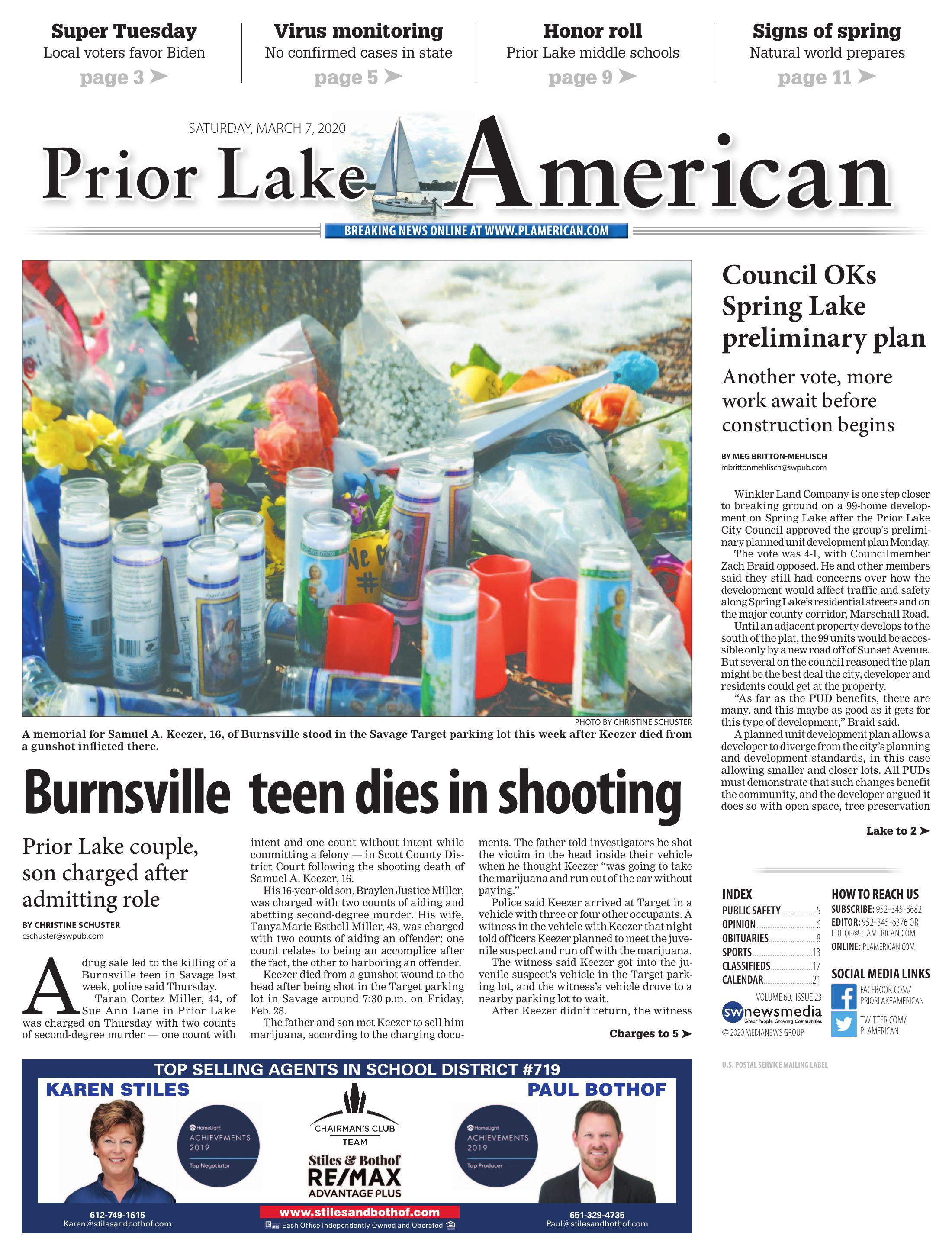